(Posted 5th October. Backdated to the day it happened.)

While waiting for breakfast to arrive, we flicked around the TV, noting that Channel 9’s Today Show kept showing bits of the previous night’s Hey Hey special. After breakfast (eggs on toast x 3) we gathered up all our bags and checked out and strolled across the street to the bus stop.

A bus showed up which wasn’t one of those listed on the bus stop sign (which, by the way, was identical in design to those now in Melbourne). “Do you go to the station?” “We all go to the station.”

My Myki money was running out, so I put some more dosh on it. We weren’t actually heading home just yet, but decided to chuck the bags into a locker at the station ($2.70) and then continue exploring.

We strolled back via the shops, and noted the first of a large number of Army Landrovers drive past with “Driver Under Instruction” plates on it. In the following few hours we must have seen a dozen or more of these drive past, sometimes alone, sometimes in convoy.

The Hargreaves Mall in central Bendigo is being redeveloped, including some big screens which judging from a letter in the morning’s Bendigo Advertiser, are seen by some as a waste of money.

Back to the tram stop. The first tram was headed down to the mine, so we caught that. On arriving there, the driver changed ends and the tram conductor urged us to cheer him as he reboarded the tram, so we and a couple of other passengers did so. Then we set off back through the centre of town and arrived a little while later at the tram museum. 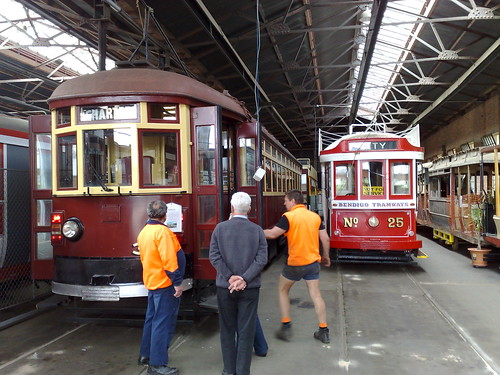 This time we wanted to take a proper look. The staff there offer a half-hour tour around the place for anybody interested. We and a couple of older couples took it, and we learnt about how Bendigo’s tramways got started (the first incarnation was battery-powered; they didn’t last long as they kept running out of juice on the hills, and passengers would have to push them back to the depot) and how the system was shut down and the vintage tram tour put in place.

The kids wanted to do a bit of filming with the video camera in the cab of the Z1 tram, as well as at the controls of a “simulator” (which looks like it was a driver console ripped out of a tram and placed against a wall) for editing together later with other footage. I pottered about the souvenir shop and looked at the various other trams.

Then we walked back the way we came, more or less, to the Chinese museum, noting more Army Landrovers passing. 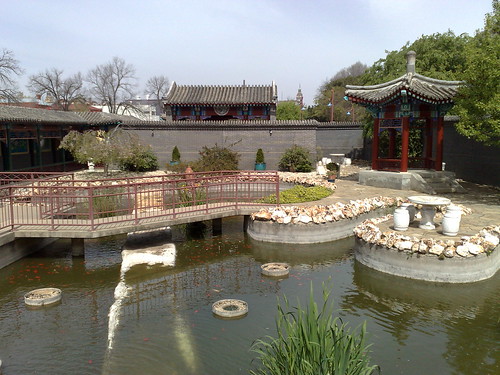 My dad’s parents came to Australia in the late-1800s; not to the Goldfields, but to Far North Queensland, settling on Thursday Island. (If they were anything like me, they might have planned to go to the Goldfields but decided they couldn’t be bothered going all that way.) So the museum’s history of the Chinese in Bendigo isn’t my personal family history, but it was really interesting nonetheless.

The dragon, at 100 metres long, is impressive enough when dormant, but must truly be a sight to behold when it’s out and about at Easter. And we took a look at the neighbouring gardens and the temple, both of which were most impressive, and very calming once inside. In the gardens you can feed the fish. We didn’t, but obviously plenty of people do, as some of them were looking pretty chubby. 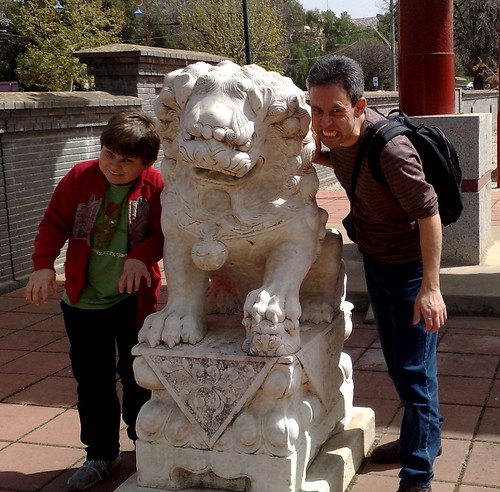 Then we headed over the bridge, through the gate, stopped briefly for a snapshot with one of the statues, and headed along the road to the Tourist Information Centre.

Arguably we should have gone there when we’d first arrived, but in fact I’d researched stuff to look at online. In the basement they had an exhibit about telegraphs, as well as the development of Bendigo. One section had a video from about 2001 describing how the local council was advocating for the rail link to Melbourne to be upgraded, and also for the Calder Freeway to be duplicated. Well, the rail line upgrade was finished in 2006 (though it’s been left with mostly single track beyond Kyneton), and the Calder Freeway duplication finished this year, so maybe that video needs upgrading.

Lunch was next on the agenda, and we couldn’t go past Gillies pie shop. Apparently they’ve been in business since the 1950s, and it’s not hard to see why — totally delicious, and the pastry was a joy to behold. Then we strolled around looking for dessert, which we eventually found at an ice-cream shop back on the highway, serving Norgen Vaaz, which was expensive, but tasty.

By this point it was about 1pm and we were thinking about calling it a day and heading for home. A walk back to the station via a postbox and a newsagent (to buy a paper to read on the way), and soon we were boarding the 13:38 to Melbourne. It was only a two-carriage set, and already filling up. We found ourselves sitting in with a snooty lady who was steadfastly concentrating on her iPod playing The Seekers, and seemed determined not to make eye-contact. Maybe she was wishing she hadn’t tried to nab four seats to herself.

At one stage the conductor went past and was heard to say to some people “Where do you live? I’d like to come around and put my feet on your couch”, which gave me warm fuzzy feelings inside. 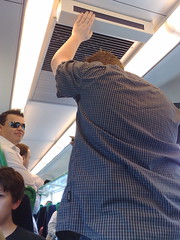 The train left on time, and filled up steadily at each stop. By the time we reached Woodend, the automated sign was still saying Kangaroo Flat, and all the seats were taken. By Sunbury the sign had been turned off, and a number of people were standing, one bloke gripping the sign to hold himself up.

The sign-gripper was chatting to his mates about things — apparently he was a Sunbury local and a regular train traveller; the others weren’t. One asked what he thought of the electrification project — a number of Sunbury people oppose it. He seemed to have an open mind; noted that some had said the suburban trains will be slower, some faster, but he’d be welcoming the fact that there’d be more trains, and they’d run later. Good for him.

2 replies on “Trams, pies, and getting in touch with my roots”

Go up for the Easter parade next year, you and the kids will have a ball and Sun Loong is a gregarious character!

somewhere around there is the Army Barracks for driver training – all the army drivers in australia go there for their 6 month training. i nearly ended up there. must have been a practical day.