(Posted 2nd October. Backdated to the day it happened.)

Originally the plan had been to go to Canberra for 4-5 days, possibly driving up via Lakes Entrance and perhaps back via Kelly country. One of the reasons for wanting to go to Canberra was that I’d been keen to see a display at Old Parliament House: the Living Democracy: Power of the People exhibition, because part of it highlights community organisations, and one of those featured is the one I’m involved with.

However, Kerryn was up in Canberra a few weeks ago, and it turns out that this is nowhere near as interesting as it sounds: merely a logo and blurb on a piece of cardboard in a display case. Oh well.

In any case, school holiday schedule considerations meant the break would have to be cut back, and I ended up with a completely revised plan: Bendigo for just two days. Short and hopefully sweet. 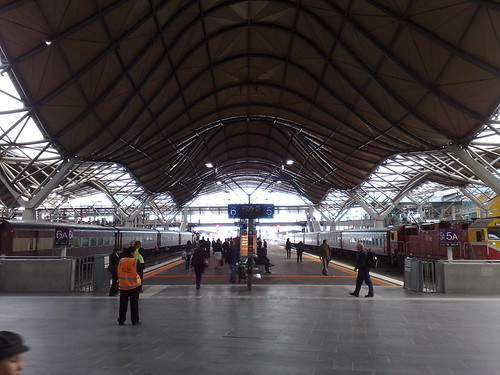 So on Wednesday morning we set out for the station, V/Line tickets to Bendigo in hand. They have a Family Traveller deal which gets you tickets for two kids free with each adult, as long as you travel outside peak hour. And it includes metropolitan travel, which frankly makes it a bargain at $15.80 each way.

According to the V/Line web site, single tickets (of which we had two; they issue separate tickets unless you’re returning on the same day) are meant to be time-stamped by station staff, but both on the way and on the way back nobody seemed to think this was necessary. *shrug* Maybe they’ve realised that allowing only an hour of travel either side of your train trip isn’t very practical, especially when they advise you to allow at least 30 minutes interchange time at Southern Cross to ensure you make your connection.

We got to Southern Cross in plenty of time for the 9:15 to Bendigo, and spent the time observing four promotional people dressed as the Village People, singing YMCA, with a placard nearby dubiously linking this to Hallmark Cards.

The train zoomed out of Melbourne. Given it was a V/Locity train I wondered if we’d reach the full 160 km/h, but it turns out that of the two tracks that go most of the way to Bendigo, only one has been upgraded to 160, and the other only to 130, and the faster line is used for peak direction. So we had to satisfy ourselves with 130 km/h, which still seemed pretty fast from where I was sitting.

In-flight entertainment was courtesy of a family sitting opposite: a lady with her three-year-old girl (“Brooke Livinia! Get back here now!”) and a ten-year-old son (who spent the first part of the trip in a long and presumably smelly session in the toilet, then the rest of the trip trying to teach his sister what seemed to be an impenetrably complicated card game).

I thought they were going all bogan on me when the mum started ranting to the boy about how his father shouldn’t have “borrowed” ten dollars off him. But we got chatting later; they were doing a similar thing to us — a 2-day break in Castlemaine, sans motor vehicle, and they’d be riding the Maldon stream train. 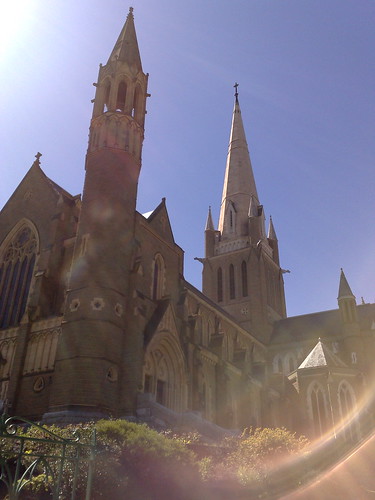 We got into Bendigo a bit after 11am and went and found the hotel. I’d booked one on View Street, which looked to be reasonably central to things, and had a room available with three beds. Despite the theoretical check-in time being 1pm, they were happy to let us into the room early, and we dropped the bags and things before heading out again.

Rosalind Park is closeby, so we went and climbed the old mining tower thingy there that now serves as a lookout. Back onto View Street for some lunch, then we walked along MacKenzie Street past the awe-inspiringly huge Sacred Heart Cathedral, noting the gargoyles looking down at us. We snuck a peek inside, though a sign warned there was a service going on. 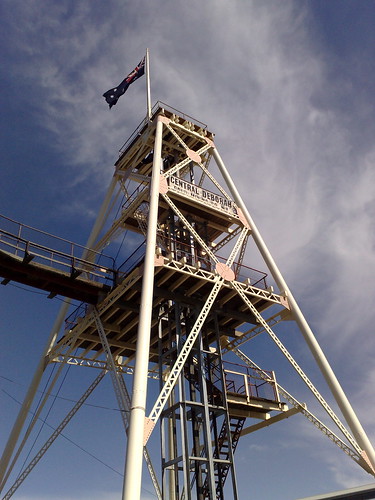 A little further along the highway we got to the Central Deborah mine, where I’d booked us in for a 2pm tour. We were a bit early, so got to look around the museum and so on beforehand.

The “Mine Experience” tour was fabulous. After donning hard hats with torches, we went down in a cage to 60 metres down (the equivalent of 20 storeys) and got shown around one of the levels of the mine. Having to wear the hats and tramp about in the dark just added to the experience, making it all terrifically atmospheric, and Bob our guide was excellent, and knew how to keep the group entertained as well as informed. I can’t recommend this tour enough; the kids loved it and so did I; it was great. 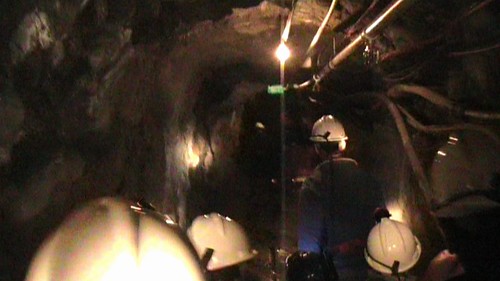 Back on the surface we got onto the vintage tram (it stops outside and they do combined tickets which include the mine tour and two days of riding the tram — perfect for us — $73 all up for the three of us). As in days of yore, the model we caught had no doors in the middle section, and we sat there enjoying the fresh air. The tram took us back through the city centre, with an automated voice recording describing the sights along the way. There was a short stop at the tram depot/museum, and we planned to visit it properly the next day.

We took the tram to the end of the line, then back a little way to Lake Weeroona. (For some reason at some places the tram only stops in one direction.) I’d read there was an Adventure Playground there, though it was a little underwhelming.

The tram conductor had warned us we had been on the last tram, but we had a plan. Bendigo’s bus network is reasonably fathomable (unlike, say, Geelong’s used to be, and partly still is), and thanks to the miracle of technology, it’s very easy to check bus times on the Metlink Mobile site — well at least it was as soon as I worked out that Bendigo is in their “Lodden – Mallee” category. Hmm. Still, simply noting the route number (8) on a nearby bus stop, and checking the times, we were able to know that there was a bus back to the centre of town every half-hour, and when it left.

The bus was dead on time, and I dug out my Myki ticket from Geelong which still had $3.20 on it, which worked like a charm (though the scanners were a tad slow), and got two 2-hour short-term tickets costing $1 each for the kids. Easy.

Back in central Bendigo, we went and found some pizza for dinner, and while we munched I tried to determine where the nearest supermarket was. Being the age of technology, rather than just ask one of the waiters, I tried White Pages online on my phone, and found there was a Coles just a couple of minutes walk away, where we picked up some bananas to eat later.

Back to the hotel, we put our feet up. I tuned into the Hey Hey It’s Saturday reunion, which I might blog about separately later. Eventually it was bed time, and we dozed off, a good day’s exploring behind us.

5 replies on “Sending my kids down the mine”

Sounds like a great first day in Bendigo. I will have to go there myself one day. I will look into the mine tour since you recommend it.

Although you may have stopped off along the way if you had driven, isn’t it great to have the personal interaction with people on the train. You don’t have to get involved. You can just observe.

Isn’t a good bit of the track to Bendigo single track?

Bendigo buses are very on time and a daytime half hour service for the numbers who use it is good. I don’t thing the tram system was more frequent.

I have fond memories of the Central Deborah Mine, too. (S*** it waseight years ago that I was there!)

Lovely town which – along with Ballarat – deserves to be better known internatrionally than it is.

And I don’t just mean for the trams…….

Jed, they do a couple of different tours. The 75 minute one suited us well, but there are more lengthy options too.

Andrew, the trams were running every half-hour, but finished up around 5pm, earlier than the buses. I think the trams might run more often on weekends, while the buses run less often.

There’s such a wealth of things to see and do up there you’ll have to research them and take the kids again sometime :)
Castlemaine Festival is every 2 yrs, that’s usually good value and Ballarat is a gorgeous place to explore, as is Dunolly…