The secret route numbers are getting worse on Collins Street. 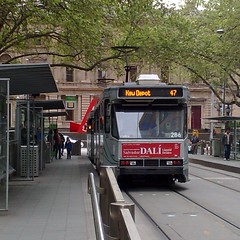 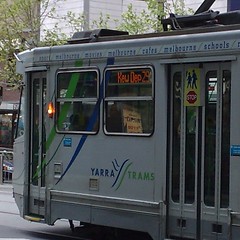 It looks like a 47 is a shortened 109, to Kew Depot, presumably via Victoria Street.

A 29? Not sure, maybe a shortened 48. Does that mean it goes via Bridge Road? Not sure.

And if the 29 and the 47 both say just “Kew Depot”, how do you tell them apart if you’re trying to get to Victoria Street or Bridge Road?

I suspect the answer is: you wait longer than necessary for a 109 or a 48.

I ask again: Why these arcane numbers? Why are they not officially documented? And if each of them covers 80% of a “normal” route, why are they even used at all?

Update 9am: Actually I just spotted another variation: two Citadis trams showing “Kew Depot” with no route number, so no clues as to which way they get there.

A couple of years ago I wrote a post on Melbourne’s most-confusing bus route: the 627.

The Bus Review for this area commenced in October 2008. No news of a fix on this particular problem, even though it’s as simple as giving half the route a different number, so it’s easier to differentiate where the bus is going. In fact I think if the Bus Review process can’t fix this up, it’s failed miserably.

At least the old map tried to indicate how it worked, so if you concentrated really hard you could work it out.

The new map doesn’t even try. It just paints the whole lot Metlink Bus Orange, and joins up all the lines, so you’ve got no chance of working it out. And I’m really not sure what’s going on around Oakleigh station.

11 replies on “Updates: still confusing, and getting worse”

Time for a big shake up of tram route numbers. There is little logic to them and people quickly adjust to route number changes. There also needs to be some consistency in what is programmed into the destination displays and what the drivers display, with route 16 being the worst. The 216/219/220 buses aren’t much better either.

Most of the bus passengers just resort to asking the drivers these days, signage is way too confusing.

The bit between Elsternwick and Ormond stations looks great – zigzag-ing up back streets to get from one to the other! Seems to be a common prblem in Melbourne.
Three hour round trip is it??

That part of the route appears to be designed to fill the gap between the Glenhuntly Road tram and the North Road bus, and coincidentally more-or-less follows route of the long-since defunct Rosstown Railway.

According to the timetable it’s about 35 mins from Elsternwick to Chadstone, then another 25 to East Brighton, so about an hour each way.

My experience with the bus review process would suggest that its report will certainly recommend a fix for that 627 problem. Whether the government adopts the recommendation is another matter entirely.

Obviously nobody thought about the Kew Depot run in routes when they moved Route 48 to Collins St. The destination needs to have a “via” added, Kew Depot via Bridge Rd, or Kew Depot via Victoria St. The Citadis’ have always only shown Kew Depot without a route number. It wasn’t confusing when they ran on separate city streets but now they do need to add the “via”.

This site, http://www.geocities.com/Hollywood/Set/9507/tramrouteindex.html, although not totally up-to-date, lists all the “secret” numbers.

I agree that the tram route number system has evolved into a mess. Perhaps make all routes 2 digits and add a third digit for short workings. Route 48 would have 481 for a short working to Kew Depot, 482 to Kew.

Or go back to old practice of adding a letter suffix eg: 48A for a short working to Kew Depot.

I use the 627 sometimes to go between my local 64 tram on Hawthorn Rd and Chadstone. I’ve got no problem understanding it. It’s USING it that’s the problem.
I’ve mostly given up on the Chadstone > Brighton East section because most of the time it terminates short.
The Chadstone > Elsternwick section is long and winding and infrequent anyway.
There’s also the 623 and the 900->3 option.
At chadstone, you can generally pick the most suitable route at the time but picking the right service from Hawthorn Rd is like a game of Wheel of Fortune. You could score 3 minutes, 10 minutes, 25 minutes and lose a turn (missed a service because the bus got there 1 minute before the tram).
No wonder everyone’s attempting to win the major prize (the car).

and i reckon the tram drivers just make up any numbers they want to when not going to the end of the line…i have see many ridiculous numbers that have never been seen since.

The 2nd post on his page shows the official ideas in the bus reviews for your area, including unravelling the 627
http://www.busaustralia.com/forum/viewtopic.php?f=4&t=35160&p=489724

Louise, I agree. A number of issues were raised with Yarra Trams, but they pressed on anyway. If you’re a PTUA member, see the July 2009 newsletter, page 3.

Shweeny, thanks. I’d seen that before, but of course that’s just an early version of the recommendations, and doesn’t have to be adopted by the DoT.