She looked about twenty. She sounded upset on the phone. She wasn’t quite sure where she was going, and her phone battery was running out. The heat in the tram was stifling. She hung up and started to sob. Then she collapsed.

She mostly fell downwards, and didn’t seem to bump her head. A couple of people helped her sit up, someone with first aid knowledge told her to sit with her head between her knees. Someone else called out for water. From somewhere in the crowd a bottle was handed to me, and I held it in front of her so she could drink from it. 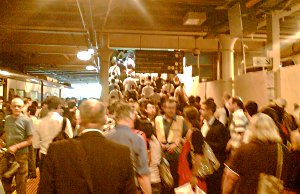 We were packed into the 67 tram like the proverbial sardines. Apart from a mass of heat-related train cancellations, the Sandringham line had been suspended, apparently due to a disturbed man at Balaclava station threatening to jump from the bridge, and hundreds of railway refugees had crowded into the Swanston Street tram stop to look for other ways home. Just my luck to be on that line that night. Inevitably the first 67 tram that came was a Z-class — for the non-gunzels that means short, and in this weather, hot — and people headed to Balaclava and all stations beyond tried to cram on. It was further down St Kilda Road that the lady fainted.

She seemed almost apologetic, but we urged her to stay calm, to drink the water and take it easy. It was too crowded to get a message to the tram driver, and we kept on rolling down the street, stopping at what seemed like every single traffic light.

We talked to her, worked out where she was going. She made another phone call. Elsternwick. Yes, this tram goes to Elsternwick. Glenhuntly Road — a hotel? Yes, we go right past the Elsternwick Hotel. Are you sure you wouldn’t like to get out and sit and wait for a less crowded tram? No, she was in a hurry. It’s about twenty minutes. … Ten minutes … Almost there … This is your stop. Thank you. You’re welcome — hope your evening improves.

I went a couple more stops, to Elsternwick station, where trains were running further south. I’d been delayed by perhaps 30-40 minutes, but it could have been much worse.

…
So what are the root causes here?

Acting Premier Rob Hulls demanded an explanation. The short version is that the fleet and infrastructure aren’t designed to handle Melbourne’s hottest days. And it’s the government’s responsibility to upgrade it.

The Comeng trains (which accounts for more than half of the total train fleet) has air-conditioning which overloads on hot days. They’ve always been like that. Despite the fact they were all upgraded in the last few years, nobody thought to upgrade the air-con.

Some of the track on the rail network is susceptible to heat, resulting in speed restrictions, and unlike in Perth there seems to be no proactive work to prevent it.

And the incident at Balaclava? Probably unavoidable, but why do the contingency plans take so long to get under way, and why are the alternative routes often so poor — with trams and buses inevitably stuck in traffic (evidently the Roads Minister doesn’t yet quite grasp that tram/bus priority should mean the trams and buses get priority over cars), and most bus routes infrequent and not shown on most maps?

Melbourne depends on the public transport network to move hundreds of thousands of people a day. Sure, problems happen, but it shouldn’t fall apart when the weather gets hot. The system has to be better.

Kosky will get a lovely weekly report this week, methinks.

So that’s what was happening at Balaclava. Why didn’t the Police just do there normal thing and shoot the guy? I’m sure nobody would have minded.

They’ve known about the air-con for at least 3 years and gee whizz Summer still keeps comin’ around so which idiot is hoping to save a few bucks with false economy?
Last time I heard any waffle about tracks buckling in heat was trotted out as the excuse for the Echuca V/Line train running slower times than scheduled the past 2 Summers; I suppose it’s still an issue on that line as any track upgrades would have been completed with ticket parades and marching bands with this useless mob in govt.

One train driver on the radio this morning said that it was not the Comeng train air con that keeps breaking down, but the newer European trains. Makes sense to me.

That’s weird, because nobody’s (publicly) claiming the X’Trapolis or Siemens train aircon is breaking down. I’ve been in Siemens trains on 40 degree days when it doesn’t seem to have a problem.

If we actually had spare rollingstock capacity (on any type of wheel) we could trot out some D2s or similar from the closest depot to at least try and get some alternative transport on disrupted routes (although that wouldn’t help in the half of Melbourne without trams, you’d have to find buses, also in short supply). And give them priority, as already said. Segregated PT lanes should be the norm, not the exception.

Since there seems to never, ever be any form of contingency planning despite consistent levels of disruption (many minor, a few major each year) though I wouldn’t hold my breath for things improving.

The fact our track is still susceptible to heat expansion is a joke – the technology to prevent this (expansion joints) and/or proper concrete sleepering has been around for a long time and their use should be much higher than that at present.

Further afield too – V/Line essentially operates a “summer timetable”, when judicious track upgrades would let it deliver reasonable service for all of the year instead of just a sizeable fraction thereof.

No speed restrictions or disruptions here in NSW, apart from the usual whinges about the oldest non-air conditioned rollingstock being too old. Usual 115km/h limit applies.

The chaos on every hot day in Melbourne is ridiculous – the air conditioning thing happens year after year, and so do the speed restrictions.

The latter doesn’t effect suburban trains *as much* because most lines are only 80km/h (only a few are 115) but it cripples V/Line’s service when trains scheduled to do 160 are dropped to 90.

If there was more concrete sleepered track, it would be less of an issue. The line to Sandringham has recently been re-sleepered, but it seems fairly patchy – some sections are 100% concrete where as others are only 1-in-5.

It’s always thew “acting” premier or some other “I’m just a stand-in mouthpiece” substitute who’s trotted out, isn’t it? The Men In Charge are always away on a fishing trip or other unavoidable “I’m over there for the next few days” thing when predictable bad shit happens, huh?

And I see the Age editorial today agrees with you, Daniel, and quotes you to boot:
http://www.theage.com.au/editorial

I have always found all models of trains to be nicely cooled on hot days. The comment came from a train driver, who must have been referring mainly to the X’Trap train. He said that they were very cheap trains, designed to run on the Paris Metro. In such matters, I would normally believe the train driver over what management or government says. But it was only a talkback caller.

Looks like there are X’Trapolis trains in Paris, but on the RER, not the Metro (and they’re the X’Trapolis Duplex, double-deck trains, in fact!)

A letter in The Age today outlined what happened to an inconvenienced train traveller in Britain recently: after an hour delay, each passenger was personally given a form to claim reimbursement for the trip. The train management apparently have an agreed passenger treatment charter, and they abide by it. The question is – when does Victoria get something like this?

Victoria gets something decent like the charter when it’s clear at the ballot box PT is one of the top issues. At the moment people complain but keep the sitting members on safe margins, so little happens.

Slightly offtopic, but has anyone spotted this?

It was -26C in Chicago on Friday. Trains don’t run well in the cold, either. I wouldn’t know first hand, as my car would not start. I could not even get to the train station.

My thought would be to make a hole (eg a window that opens sideways!!!) in the bottom of the tram (for the cool air to come in) and a hole on the roof (to release all that hot air).

Only our double decker buses have air conditioning here in Victoria, BC Canada. It is OK except for the hottest days (which would be cool to you. We don’t get the hot weather you get. Mind you, we don’t get the cold that the rest of Canada gets either! :):) Not counting this past Christmas, of course :))

When I was looking for a new job a few years back one thing I considered was now I’d have to get there. I used to be a Sandringham line person, which meant I’d be late to work at least twice a week and have at least 3 evening trains cancelled or ‘delayed’. I ended up with a job a 10minute car ride away and days like this I’m sooo glad.

Sure I miss reading books on the train, but gee I love my air-conditioning and never being late for work.