Went with the kids last week to look around Harbourtown, the new bit of Docklands which has the big wheel in it. 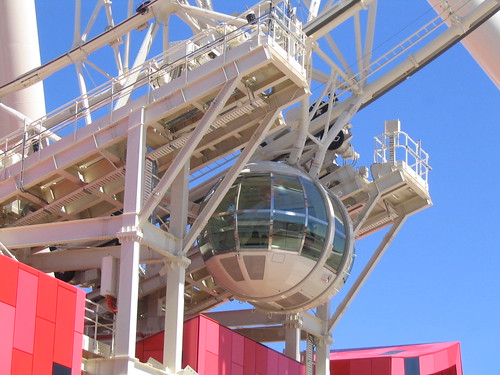 Much of Harbourtown is looking a bit basic at the moment. The shopping centre is open, but half the shops aren’t, and some are obviously still getting stock in… the EB Games had big Sale tables with nothing on them.

Still, no doubt over time it’ll take off, with yet more places to part with your money.

We didn’t go on the Wheel itself, but if you think it looks impressive from afar, it’s doubly-so from below.

What interested me is the streetscape within that area of Docklands. It seems like someone’s learnt from the mistakes made at Southbank — which has wide boulevards which encourage lots of through-traffic and make the place unfriendly to pedestrians, and subsequently quite sterile. In contrast, here we found the main street in has one lane of traffic each way, plus segregated tram lanes. Even with few shops open, it was clearly more ped friendly, and through-traffic is kept at a distance, over on Footscray Road. 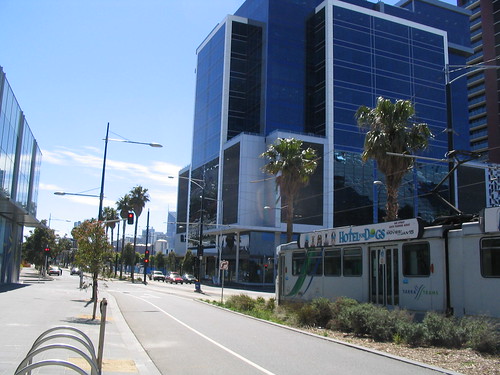 Given time hopefully the empty lots now being used as carparks will disappear to be replaced with buildings that are actually useful and attract visitors.

We caught a 48 tram back into the CBD, accompanied by a talkative tram driver on the PA doing the full tour guide bit, highlighting such public artworks as the cow up a tree, which makes me think I should do a re-visit to The Grooviest Thing in Melbourne.

I like the architecture of Docklands. Good use of light given the attention payed to glass works. The street designs are excellent too…though I’d have liked to see the park a bit more shadier.

Harbourtown itself didn’t impress me when I learned a ‘home-maker’ centre was to be constructed there (gosh I hate those places…). And seeing as you’ve been reading my posts, I’ll assume you know of my ill-sentiment regarding that wheel. ;)

Yet to go down there myself. I’m afraid the placement of the big wheel still seems like a total mystery, there are a squillion better places it could have been put, it’s obviously meant to be a drawcard to get people down to the ghosttown that is Docklands in the first place. I guess time will tell if it’s successful or not. The news that a couple recently joined the “mile eye club” leads me to think that the wheel probably isn’t that busy.

I took a ride on the wheel on Christmas day. It does give a surprisingly good view even though it is in an odd location. The price was also surprising as the ride cost me nearly $30. I figured I could pay this price at least once but others will balk when they see the cost. After the ride the passengers are funneled past a desk selling the photo taken of them in their pod for an additional $10 and up. I passed on buying the photo. Next the passengers are funneled through a gift shop and a small refreshment area. The ride itself is very well engineered and constructed and the staff were friendly but most people will probably only take one ride given the expense. A couple with two children could easily spend over $100 for the ride, gifts, photos, and a snack. I would think it will be more popular with tourists and less so with locals.

That would be this same wheel yes?

I’m not sure why people complain of the cost. The London Eye costs about 15 pounds (going up to 17 in April), so $30 is comparable.