They came with a compass. Which way’s north? Ah, thought so. Do you want it on the front, or the side? I don’t mind… front’s better — I’ll be setting a good example. Behold: a green geek.

The ladder went up. The collector went up and got connected. The old tank got ripped out and taken away. Some rummaging inside the roof. New tank in the old one’s place. It even looks more stylish. (Evidently 90s tanks were square and boxy; this one’s smooth and round.)

The way it works is pretty simple. An electric pump sends the water into the roof, so it goes through the collector and heats up as it goes, before being stored in the tank. When you turn on the tap, the system either gives the water additional heat from the gas if it’s not warm enough, or mixes it with cold water if it’s too hot (which apparently is common on sunny days). 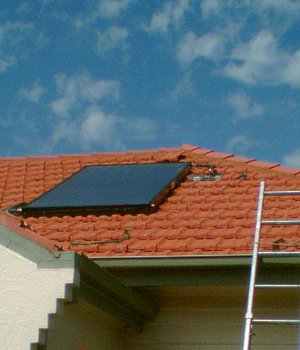 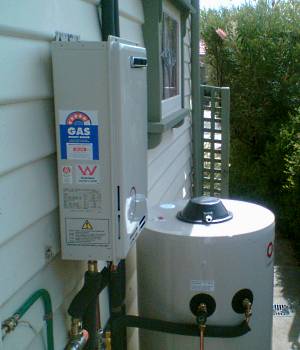 The installation wasn’t entirely without drama. After the two guys had gone, the electrician turned up to install the new power point for the pump. He asked me if I had a shifter.

A shifter? I, and I realise I’m showing my mechanical ineptitude here, didn’t know that he was talking about, and said no. He kept asking, with increasing disbelief that I wouldn’t have such a device.

It eventually became apparent that he spotted a dripping water connection, and what he was asking for was an adjustable spanner. Apparently they’re really called shifters. How did I live on this earth for 37 years without knowing that? He did some fiddling, and all was good.

So now I have (almost) free hot water, at least until the sun fades away into a white dwarf, a few billion years from now.

15 replies on “Powered by the sun”

Its a shame a solar panel can’t be used to supply electricity to the pump that moves the water to the roof. Then it would truely be free hot water (on sunny days).

they’re only called shifters in Australia – I had the same problem when I first moved here. I own several “crescent spanners”, but not a “shifter” (said with a broad Strine accent).

Hey, he probably doesn’t know what a ‘blog’ or a ‘firewall’ is…don’t worry about it :P.

When I was a kid we played cricket in the street using a rubbish bin for stumps.

I wonder how many runs we would have been given for hitting a solar panel on someone’s roof….

Congratulations on the new hot water system. The round tank looks similiar to an American water heater. Tankless heaters (like the one in the photo)are just beginning to be installed here in the USA. Some hot water solar panels also contain a few photovoltaic cells to power the circulator pump. The regular line powered pump uses little power anyway.

In the USA the components in the photo are almost always installed indoors. The pipes would freeze during winter most places in the USA.

The tool you describe is known as an adjustable wrench or a crescent wrench in the USA. Spanner is a British term and I have never heard it called a “shifter” here. This would be the gearshift lever in a car.

Guess I have quite a few shifters then and didn’t even realise it… cool!

Classic! I have never heard of an adjustable spanner before. It has always been a shifter to me!

Very impressive. Does your hot water arrive at mains pressure or equal to?

you never helped anyone change an engine in a car did you Daniel :)

Nathan: I know, I know! I like StitchSista’s reply on this!

If you don’t mind me asking, what brand is the new hot water heater? I have a Bosch instantaneous gas one, and would like to fit solar to it.

Origin outsource to Chromagen, who make the solar unit.

According to the link on “sun fades away into a white dwarf,” it will move into a red giant phase before that and most likely either envelop the Earth or at least scorch it.

“Even if Earth escaped incineration in the sun, its water would be boiled away and most of its atmosphere would escape into space.”

So by the time it reached white dwarf stage, you’d have no water to heat. Moot point. :-)

I recommend turning off the gas unit until you decide you’re getting no hot water. That thing will turn on at various times when you would have been happy with the temperature of the solar heated water. You’ll save gas if you leave it switched off (it should have a power point).