On Sunday I went out to see the Mernda rail extension.

The Level Crossing Removal Authority, who built it (well, it does involve new stations and grade separation of an existing disused rail corridor, so it kinda makes sense) ran a community open day, with free shuttle trains between South Morang and Mernda.

After catching a regular train to South Morang, I found a big crowd waiting for a shuttle train. 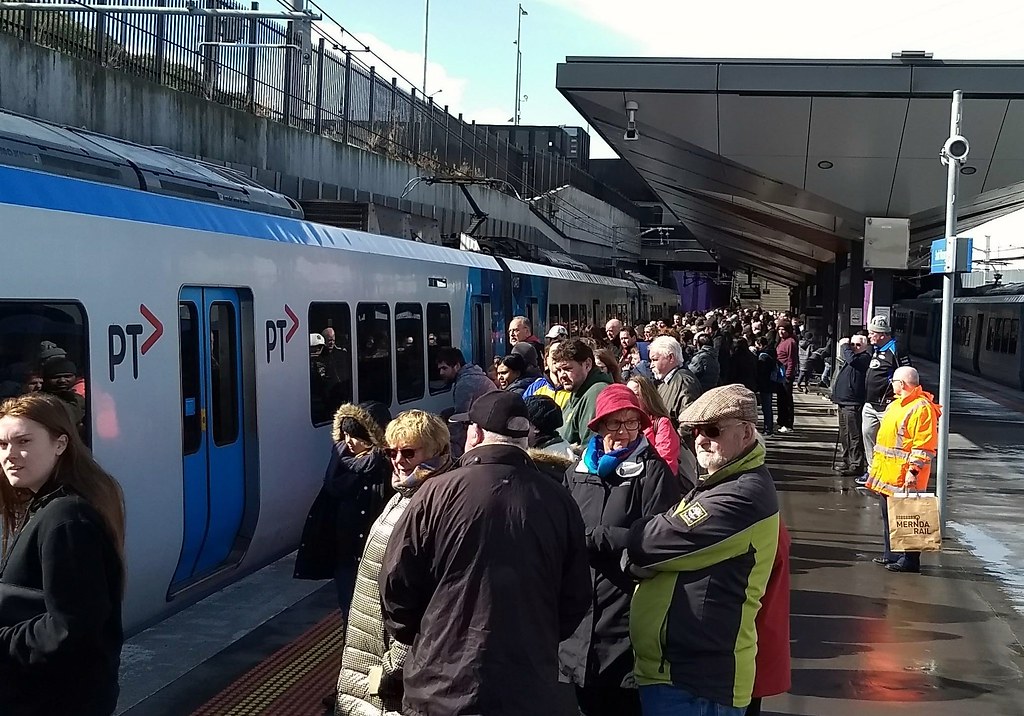 Mernda was packed with people, so it’s just as well they built this new terminus to generous dimensions, with a good wide platform. 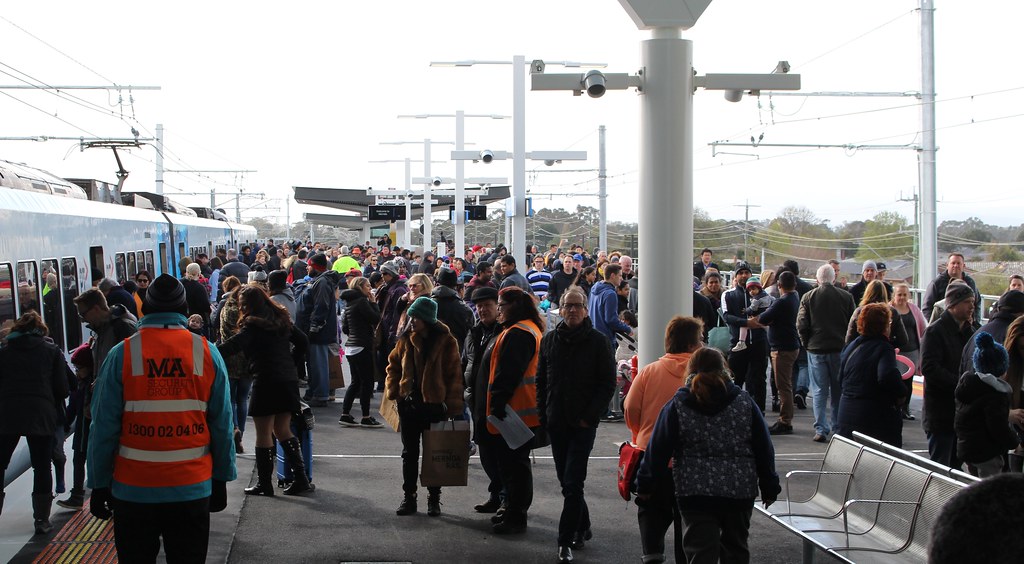 I met up with Darren Peters, who headed up the community campaign that got the politicians to commit to the rail extensions (both to South Morang, then Mernda). Locals kept stopping to congratulate him – deservedly so!

Mernda station has a wraparound roof structure similar to the Dandenong line skyrail stations, but glass panels block the wind coming through. The design is less rounded futuristic, more boxy, and I’m told is meant to reflect the farm heritage of the area – still seen on a few farm buildings in the vicinity. 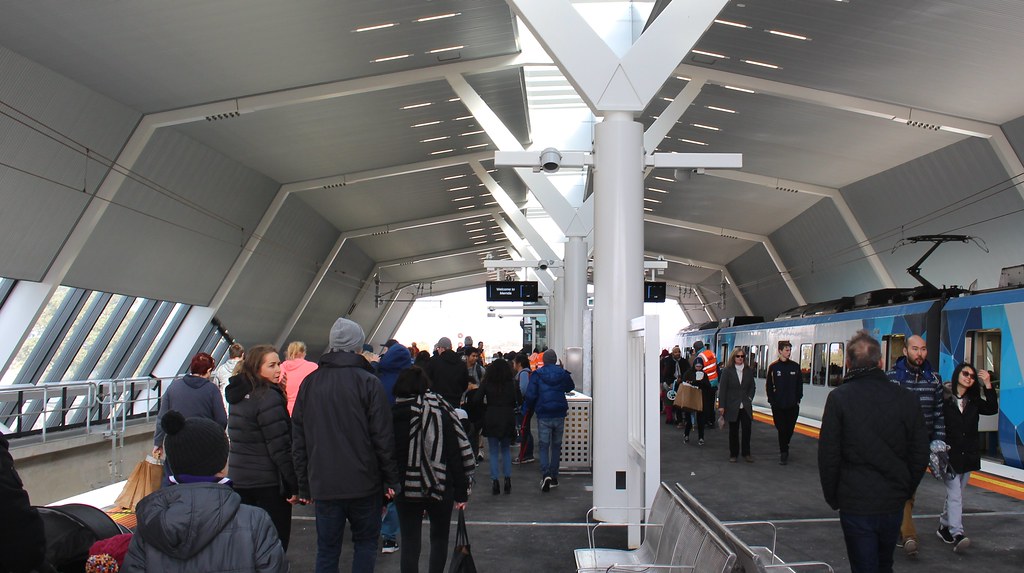 A huge amount of space is available underneath the station platform. There’s a large car park and a bus interchange on the eastern side, where buses will converge from nearby suburbs, mostly with frequencies of 20 minutes in peak, 40 off-peak.

To the west is… an empty paddock. This will be the place for the Mernda town centre. 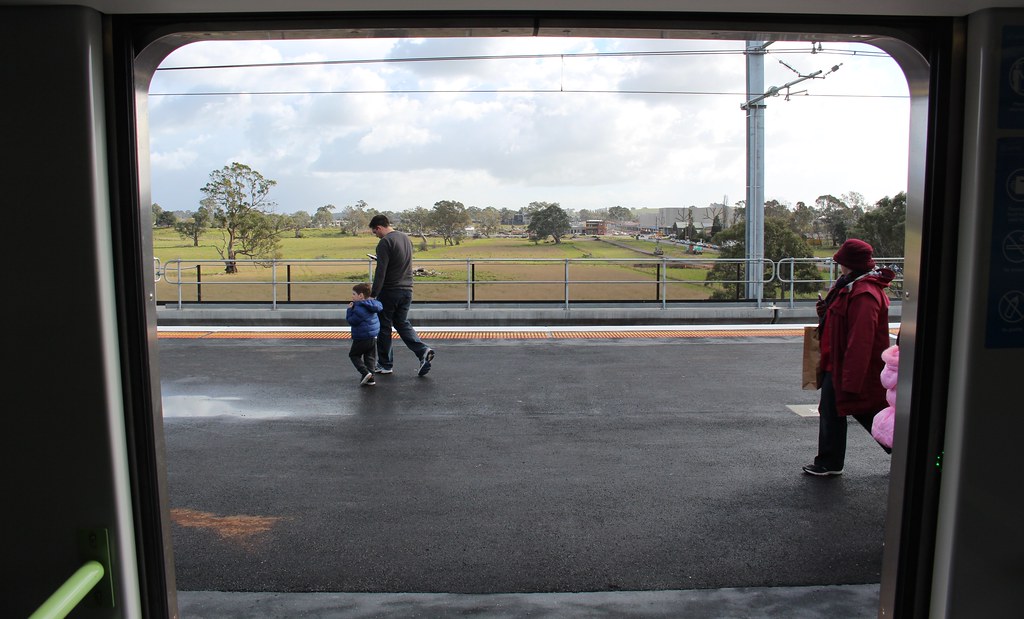 North of the station is more parking (with a second station exit), and a stabling yard to store trains between the peaks and overnight. 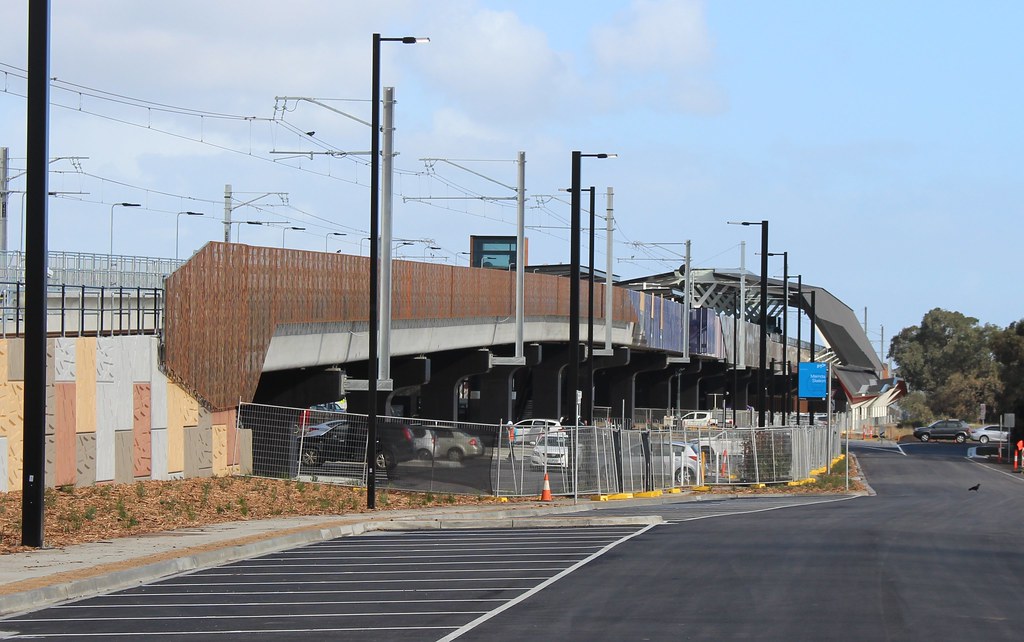 New traffic lights seemed to be giving an inordinate amount of green time to nonexistent traffic coming out of the station, without actually providing much green man for pedestrians. This was resulting in traffic jams along Bridge Inn Road. Perhaps trying to get locals used to the traffic lights being there?

It’s unlikely that the line will be further extended to Whittlesea any time soon. This is the northern edge of Melbourne, and the Urban Growth Boundary shows no signs of shifting.

While there aren’t many houses in the immediate station environs, there are a few in the street north of the station, some of which look like they’re already being re-developed to medium density. And a little further away are vast numbers of homes, so it’s no wonder Plenty Road, pretty much the only road to the south, gets packed with cars at rush hour.

Heading back south, I looked at Hawkstowe station, a similar island platform design to Mernda. Already there’s a playground underneath the tracks, which reminded me of Singapore, and may be an indicator of what’s coming underneath the Caulfield to Dandenong skyrail. 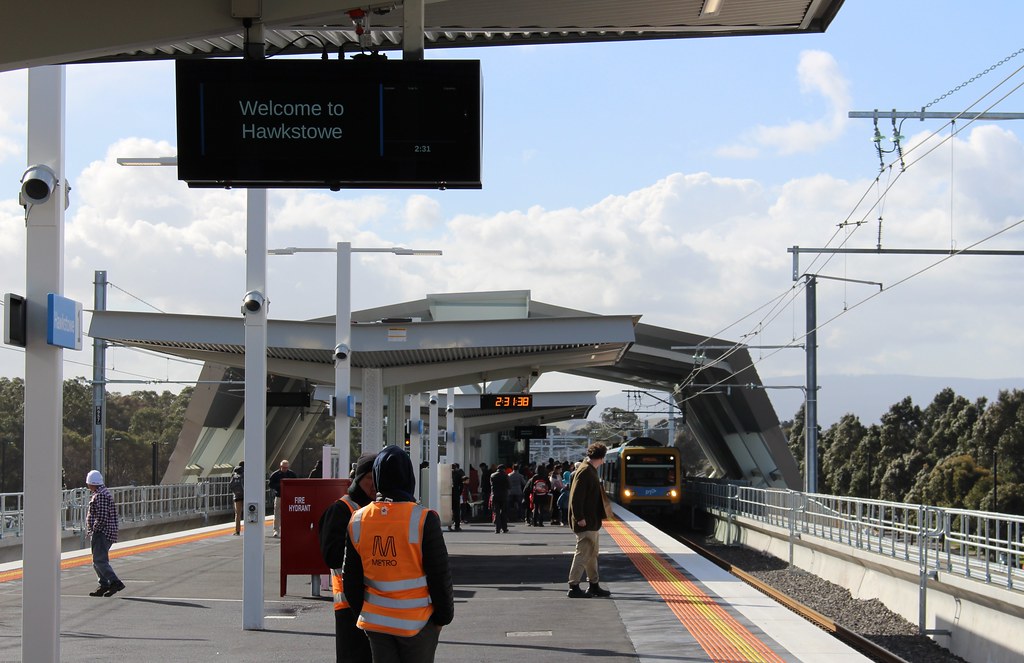 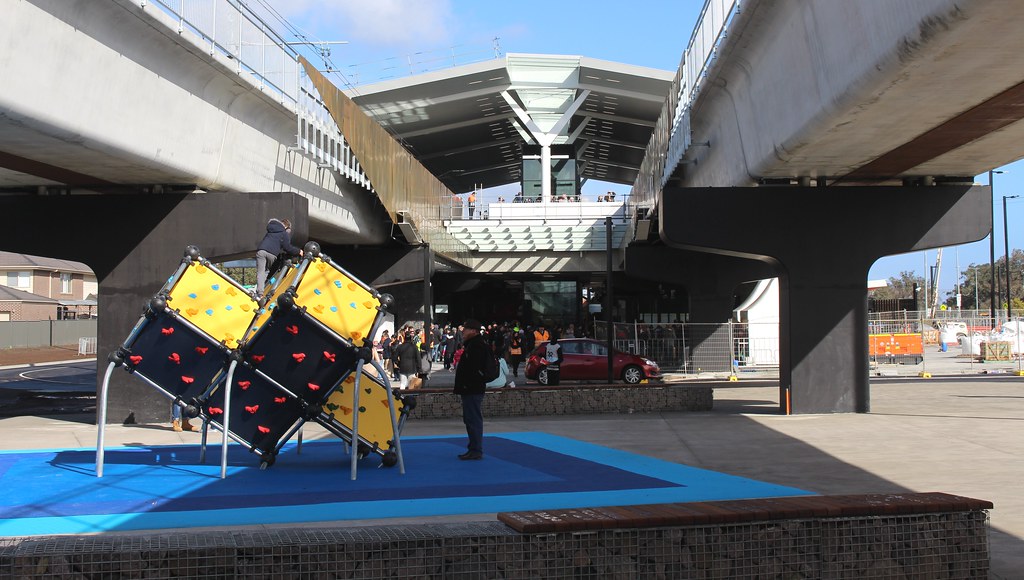 And then there’s the third station…

There’s been some controversy over the name, but let’s look at the actual design.

Side platforms have been used, which is fine, and a nice wide subway connects them, reminiscent of Tarneit station.

But for some reason the building structures have very high-up roofs, which look impressive at first, but I expect will provide almost zero weather/rain protection. 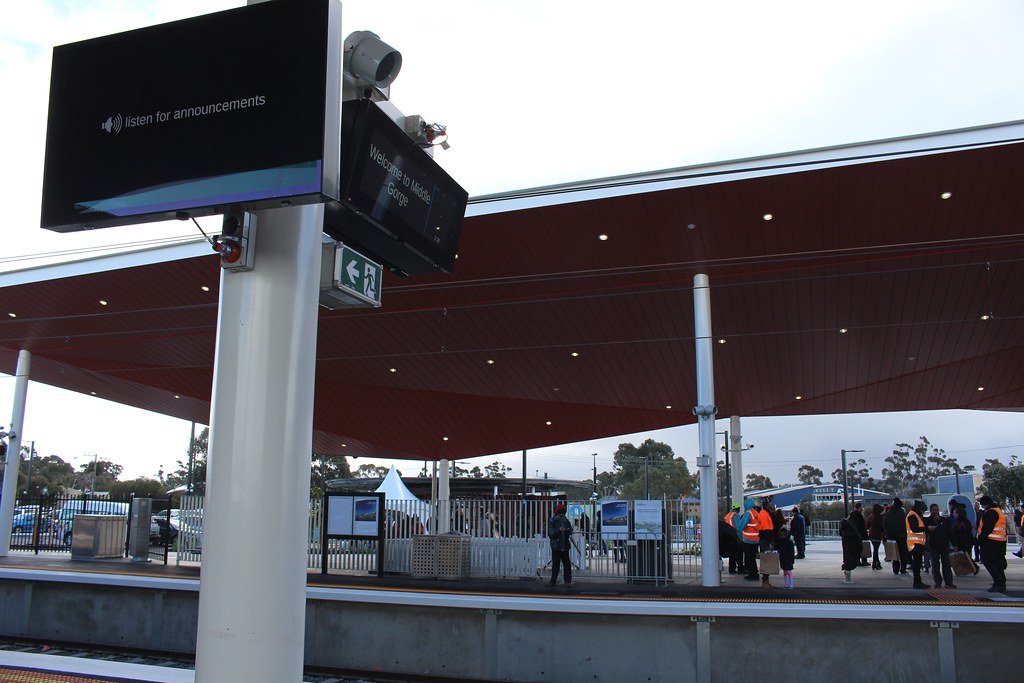 There’s a plaza on the outbound side which is quite nice, but it also means the bus stops are a good couple of hundred metres away from the station, ensuring anybody who tries to interchange when it’s raining will get drenched. The bus stop has no shelter that I could see (maybe that will be installed before opening day this Sunday?)

Okay, so not as many buses will connect here compared to the other two new stations – it’s only route 383, which also goes to South Morang, but it’ll be about eight minutes faster to change to the train at Middle Gorge.

And the shared (bike) path coming from both directions is on the opposite side of the tracks to the bike cage, and particularly indirect from the north. Is this really the best they could do?

These concerns aside, it was great to see the community come out and see their new stations – despite the weather having been horrible earlier in the day.

Enough about the infrastructure – what about the services?

There’s little doubt the trains will be popular for those headed to destinations further down the line including into the City.

Some extra services have been added for peak hour, making for trains up to about every 6 minutes in peak.

There are no express services to speak of – the peak frequency is so intensive that there’s really no spare capacity for them. An express train would catch up quickly with the train in front. And remember, express trains save less time than you’d think – typically a minute per station skipped, while penalising people at those stations with fewer services, and leading to uneven train loads.

There are some counterpeak expresses – in the AM peak a train arriving at Flinders Street will go around the Loop, then back out in service. Some of these stop at only a handful of stations (including Reservoir for the 301 shuttle bus to Latrobe Uni), then up to Epping or South Morang to terminate and go back into stabling.

Outside peak hour, the current frequencies will remain: mostly every 20 minutes, but every 30 after 9pm, 40 on Sunday mornings (WHY?!) and hourly Night Train services overnight on Friday and Saturday nights.

In the long term, the Metro 2 tunnel will be needed to cope with continued growth on both this line and the Hurstbridge line.

Meanwhile, obviously authorities will need to watch patronage carefully and keep adding more services where they can, though there’s a limit to peak capacity between the city and Clifton Hill. The usual point applies: better off-peak services can help spread the load across the day.

But one thing’s for sure: the three new stations add richly to the transport options for people in the outer northern suburbs.

This extension seemed to go incredibly quickly and painlessly. As someone who lives further down the line I’ll be interested to see what this does to peak crowding. My only criticism is that there has been no publicity about the timetable changes for those living further south.

Clifton Hill is a big bottleneck, trains get held at the junction every morning; I hope we can get a decision to proceed on metro rail 2 sooner rather than later.

Certainly looks impressive. While it does look a little “over the top” compared to existing stations I presume the design allows for expected increase in patronage as the suburbs grow.
A good outcome. Well done to the local community and PTUA for lobbying for the extension.

It is definitely a Melbourne thing to say that the station has “550 car parks”. You rarely see this strange usage anywhere else.

Hi Daniel, regarding your comment about the traffic lights giving time for the station with no traffic -this is usually a result of the sensors not being cut into the road yet, so the lights run on a default cycle regardless of traffic.

Just a comment regarding the high design of one of the stations. This is also a design flaw in the the new Frankston station, very high, and doesn’t stop the rain at all! The overall design looks nice, but there is next to no coverage from the rain.

Daniel, the Parkiteer cage at Middle Gorge is on the side with the school. Do you really think there is no shared path past the school on that side? There is! And the path being built along the aqueduct goes under the line about half way to Mernda.

Oops, meant half way to South Morang. Already getting confused with the end of the line! 😂

The lack of frequency improvements is a bit disappointing – especially during weekends and evenings. I was in Sydney recently, at there was a 15 minute service from Macarthur (the same distance from the city as Kinglake, twice Mernda) at 4:00am on Sunday morning! Meanwhile the Mernda line will only reach that level of service for a couple of hours a day – and not even after 6pm on weekday peaks.

I reckon another problem with Middle Gorge Station is that all the carpark is on the west side of the line. With no convenient way for cars to cross the railway line near the station, I am not sure what people who drive from the east side of the line are supposed to do.

I was devastated when the station between Mill Park Secondary College and Mill Park Westfield was named South Morang!

I agree that brand new train station roofs are way too high or non-existent. The roofs should be like the roofs at Flinders Street Station. If someone wants to stand in the rain, they can do that in the carpark!

Hughesdale is open too. That caught me by surprise this morning. Apparently it opened over the weekend.

That station is on the boundary between Mill Park and South Morang, so I guess they had to pick one of them. Or they could have called it McDonald I suppose.

It creates crowding around the covered areas, both in hot sun and raining days. I wouldn’t expect covering the platform with basic shelter would add much to the project costs. The one here at Chatswood outside the fancy centre section is just a simple flat roof that extends to each end of the platform and to the edges.

Are dragons native to Mernda?

[…] they missed an opportunity. In August 2018 the Mernda rail extension opened, prompting a map revision. But “West Melbourne” is still “North […]