If you’re confused about tram and train compensation thresholds, you’re not the only one.

PTV announced earlier this month that:

PTV CEO Jeroen Weimar said both Metro and Yarra Trams narrowly missed their new targets for punctuality in February, but met their targets for reliability.

PTV’s web site has figures for February 2018 that clearly show that of the three major operators — Metro, Yarra Trams and V/Line — all failed to meet their punctuality targets: 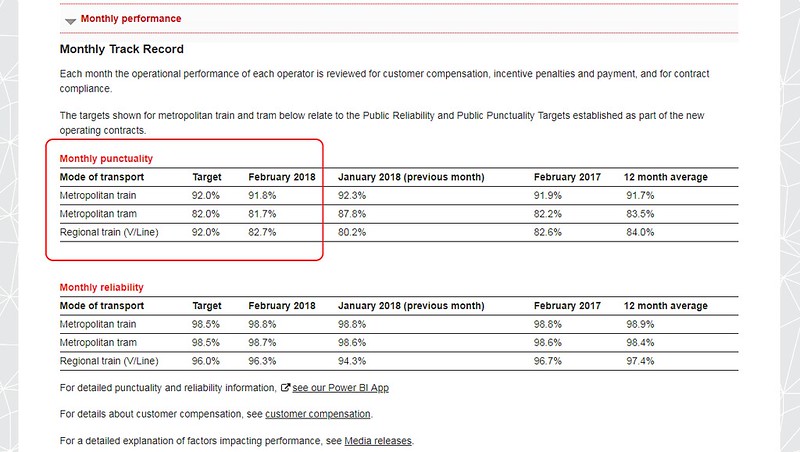 As shown in this Transport For Victoria info graphic, the performance targets changed in the new contract.

The target we’re interested in right now, punctuality, went up to 92% for Metro, and 82% for Yarra Trams: 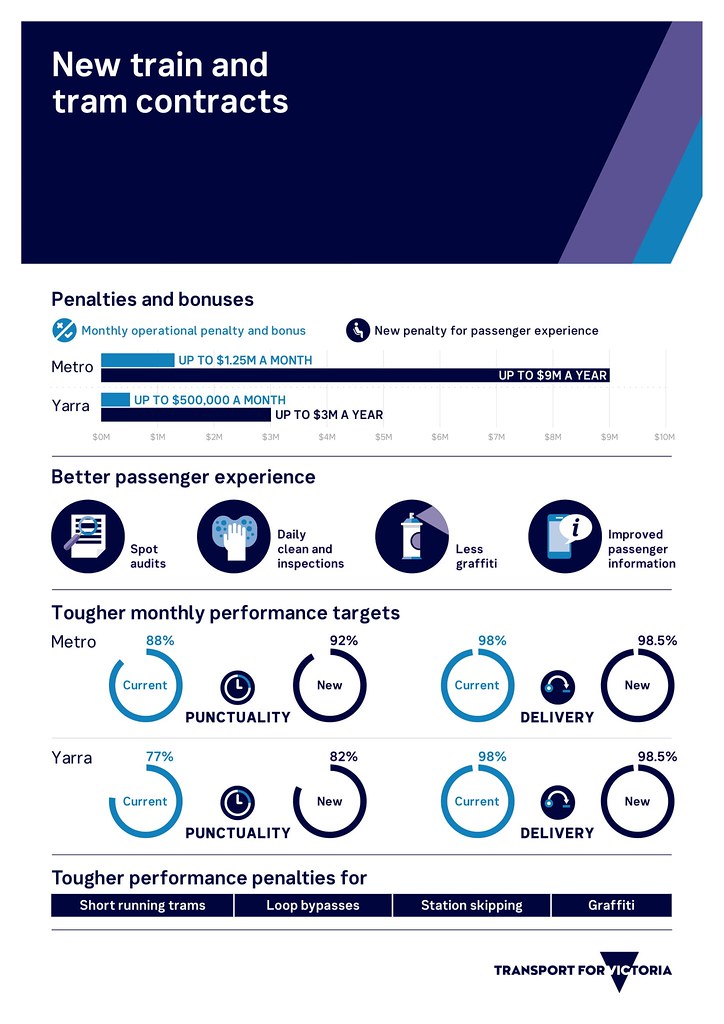 What about the compo?

Okay, so if Metro and Yarra Trams missed their targets, can you claim compensation?

It turns out no, you can’t. If you go looking on the Metro or Yarra Trams web sites, nowhere does it mention that compensation is payable for February.

Why is this? I sought clarification from PTV.

It turns out the target is different to the compensation threshold.

So as you can see, Metro and Yarra Trams beat the reliability and punctuality thresholds, even if they didn’t quite meet the punctuality targets. (Only V/Line is paying compensation for February.)

It’s also apparently the thresholds, not the targets, that trigger financial penalties.

So in this case, even though Metro and Yarra Trams missed their punctuality targets… the only consequence appears to have been a light public berating by PTV.

13 replies on “Public transport compo: what is the threshold?”

Daniel
sounds like a deliberately opaque and dodgy compo scheme.
Thanks for exposing this.
In any case, only “eligible” commuters can get compensation anyway and the rules around this are quite onerous too (in the last ten years I’ve never been eligible despite travelling by train every weekday)

Obviously a “secret” clause in the new contracts. The headline was that the government was imposing tougher requirements on the operators, but the “real” thresholds were not publicised at all. Essentially, the “targets” are not targets at all, just aspirations.

So hold on, what your table indicates is that V/Line fell short of its punctuality target and below its compensation threshold. Is this an error, or can i actually claim compensation?

“Punctuality compensation is payable for V/Line for February”

All services should have a target to be 100% punctual and reliable.

I use the 901 bus quite often, either as my alternative trip home if there are issues on the Frankston line then I can travel to Dandenong (as long as those train lines are running) then catch the 901 towards Frankston (and reverse that if traveling into the city); or my frequent trips to Dandenong market.

There’s a difference between compensation and penalties to the operator.

Compensation is an additional penalty on top of this, but not the only penalty. It’s incorrect to say this doesn’t impact the operators.

Thanks for the clarification Marcus. Now that you mention it, I do remember that being mentioned back when the new contracts were announced.

This is nothing new though, under MR3 there were performance targets, the Operational Performance Regime and the publicly published performance stats and they all operated in similar ways to how they do under MR4, independent of each other:
https://www.audit.vic.gov.au/sites/default/files/20161107-Rail-Franchisees.pdf
see page 17

Sorry, I’ll correct myself, I meant that the call-in thresholds existed in the previous franchise, not targets, and they didn’t have any relation to the public stats or OPR (now e-OPR) or the passenger compensation thresholds (which obviously also existed in MR3), like the targets don’t now.

and I meant page 3 in the document numbering, 17 in the PDF.

It looks like Yarra Trams failed to meet the reliability compensation threshold of 98% for December 2018 (https://yarratrams.com.au/performance-results). Per the compensation code, I thought that they’d have to issue a compensation notice within 10 days of the end of December, but I was unable to find anything. I recall that previously there would be a form on their website for you fill to claim the compensation.

Any ideas? I’ll be giving them a call to find out too.

@Erin, good catch. They don’t exactly shout about it, but the form to claim compo is online here: