On Wednesday the State Government announced that the first section of “skyrail”, at Noble Park, will open on Thursday 15th February, along with the new station, following a two week disruption to rail services between Westall and Dandenong.

This will mark the removal of three level crossings: at Corrigan, Heatherton and Chandler Roads. Trains will pass over all three of these, as well as over the Mile Creek.

As it happens, I went past there on Tuesday for a look. Here are some photos.

Whether you approach by road or rail, the first impression you get is how big it is. 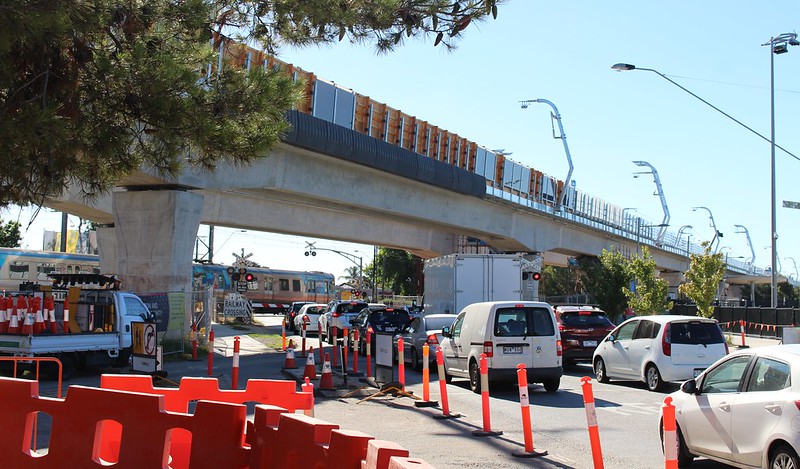 The overhead wire is going up, and news reports indicate much of the track has also been laid. 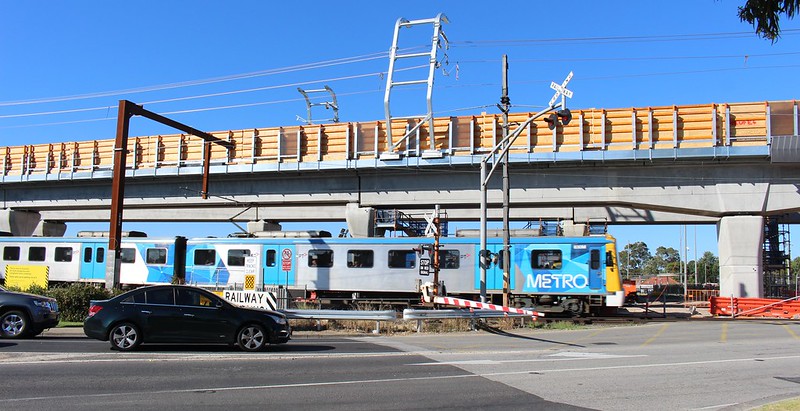 There have been some disruptions to rail services, but for most of the time, trains keep running alongside the new structure. 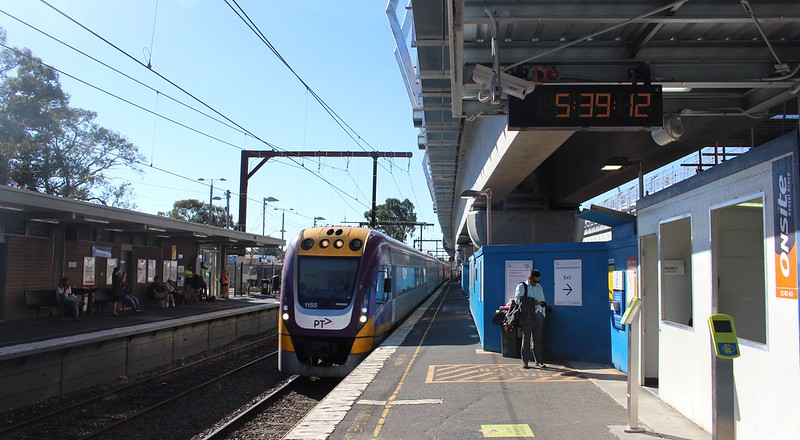 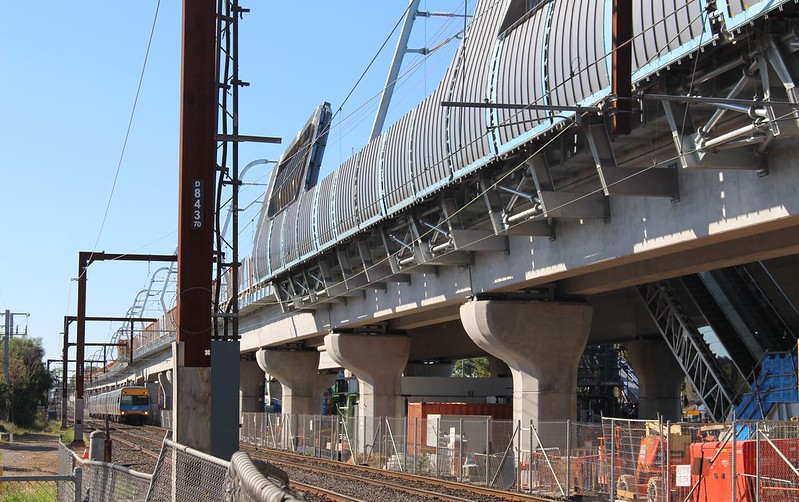 What will life be like walking around under the skyrail? You can already get a taste of it – this is the access to the existing station’s pedestrian subway to go under the tracks. 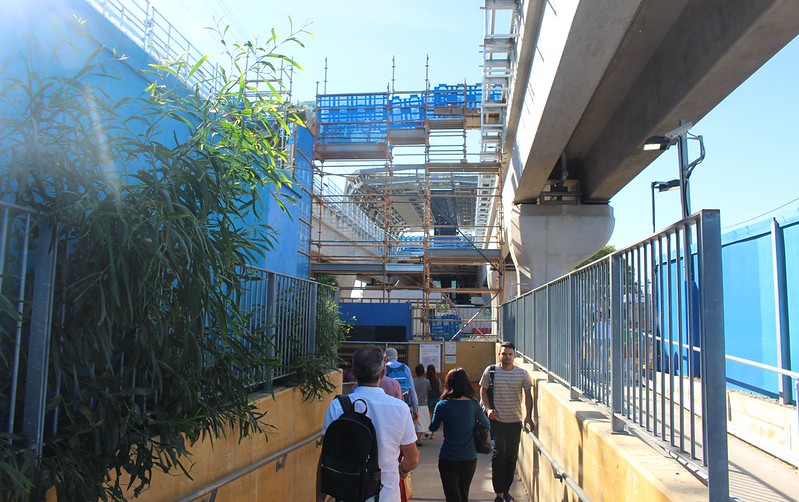 The station will include a wraparound structure to provide good weather cover, though only along part of the platforms. Its prominence means it’s likely to become a landmark of the area. 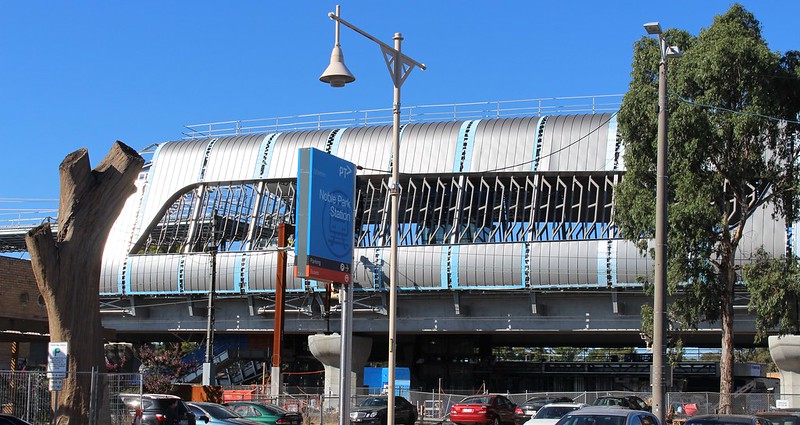 When I looked on Tuesday, I thought the station looked a fair way from completion, but I’m told by the Authority that by February 15th they’ll have the basics up and running. 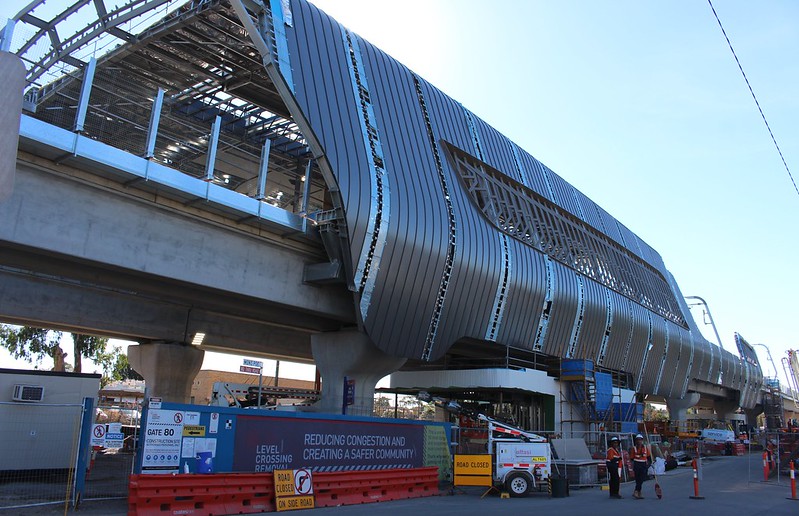 If you peek underneath the station structure, you can see stairs and escalators taking shape. 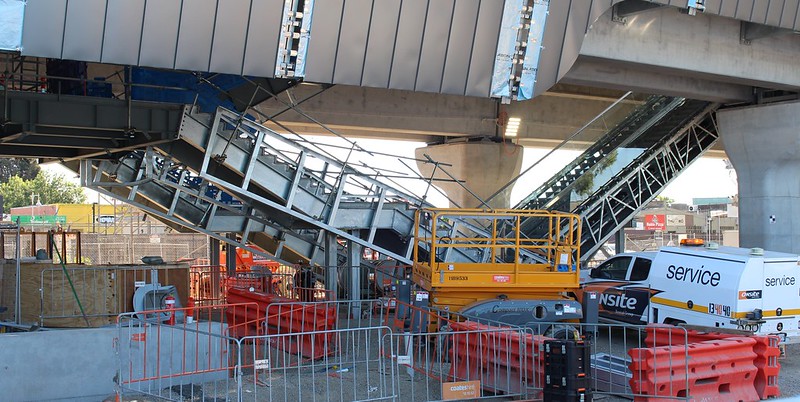 The view looking southeast along Mons Parade. Unlike between Caulfield and Hughesdale, the Clayton and Noble Park sections of skyrail are mostly buffered from houses by roads or parks, which has made it much less controversial. 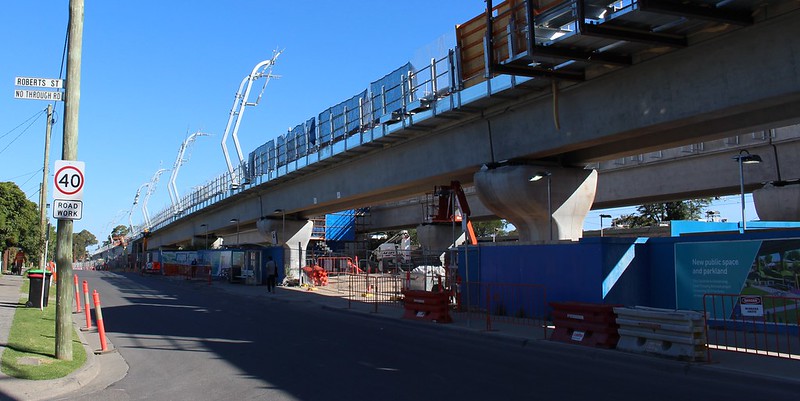 Looking northwest towards the City. At either end of the skyrail structure, a ramp brings the tracks back down to ground level. 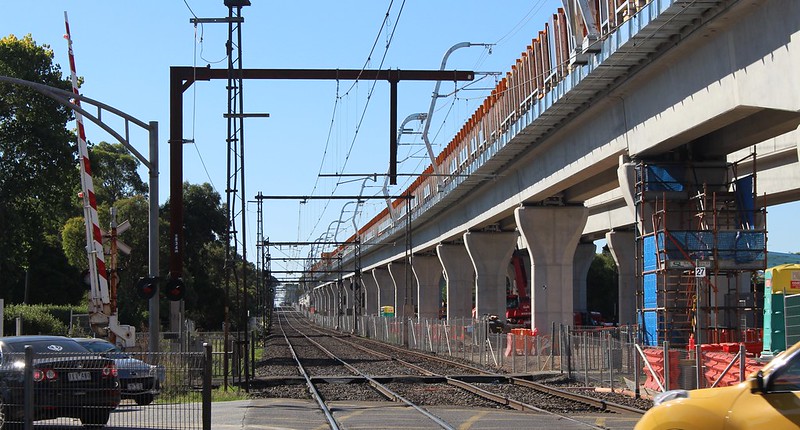 Here’s Channel 9’s story from Wednesday, showing what it looks like on top of the structure:

Trains will start running on the first of Melbourne's controversial new elevated skyrail tracks from the middle of next month. @andrew_lund #9News pic.twitter.com/CMaqqGy0d8

This section will mark the first third of the Caulfield to Dandenong crossing removal project opening. How this goes will be important for the government in this election year, given how controversial the whole skyrail project has been.

Also on Wednesday, The Age published figures supplied by the Level Crossing Removal Authority, measuring the average time savings at the various level crossings removed under the program.

An average of one minute saved really doesn’t sound too impressive, does it?

Problem is, it’s the wrong measure.

Firstly, if the only benefit of the project was more and faster traffic, it would be a supreme waste of money.

Obviously LXRA CEO Kevin Devlin realises this – he managed to backpedal on figures supplied by his own organisation.

Head of LXRA Kevin Devlin says it is misleading to measure travel time savings before and after level crossing removals. But he is referring to internal LXRA data. Story is based on their modelling. pic.twitter.com/FDB08RSI80

There are numerous other benefits from crossing removals: everything from safety to allowing more trains without locking up the road network, to more reliable street-based public transport, to cutting delays to pedestrians and cyclists and emergency services, to new better railway stations.

But even if you look just at the changes to traffic, average time saving is still the wrong measure.

The problem with level crossings is the time spent travelling through them is so unpredictable. You might get through with zero delay; you might have to wait several minutes.

Standard deviation would be a far better measure for this type of thing. What a proper study should show is that travel time crossing rail lines at these locations is far more predictable – which is precisely why it’s important for buses and trams, which are trying to maintain a timetable.

Maybe next time, the LXRA will think a little more carefully before putting out such a one-dimensional evaluation of their work.

Daniel
very impressive photos, thanks.
It remains to be seen if the completed structure will be an eyesore.

The rail shutdown was extended from 11 January to 14 January about 3 weeks ago, but the LXRA January 2018 Community update published last week still refers to the old shutdown dates.

In your original Skyrail post, you stated “Estimates, subject to change, are that there will be perhaps 15 to 20 weekend shutdowns, with only two longer shutdowns of around 9 and 16 days — I’d hope the latter could be contained to school holidays”. So far we’ve had an 8 day shutdown and next week a 16 day shutdown (plus 2 HCMT shutdowns). Hopefully, that’s the last of the longer shutdowns. It would be nice if LXRA could actually confirm that. However, the Clayton section is apparently due to open on 16 April (the Monday after the Easter school holidays), which suggests there may be a school holiday shutdown to come.

Regarding travel time savings, the LXRA hasn’t put out one-dimensional information – The Age has reported on internal LXRA documents. The LXRP Program Business Case identifies the 3 major components of the $8.694 billion in core benefits as travel time savings $3.445 billion, PT user benefits $1.525 billion and travel time reliability savings $0.956 billion (all figures using 4 per cent discount rate). The report also acknowledges that travel time reliability savings are likely to be an underestimate as “boom gate closures often impose sporadic interruptions on the road network, not predictable or regular interruptions, there is reason to expect travel times to be more variable (a higher standard deviation) through and near level crossings than on other sections of the road network”.

Yes, that should have been February. I was too busy making sure I got the complicated bits right, I missed the obvious.

The longer we leave this type of project, the less likely it would ever happen. Wait a decade down the track and the cost would have trebled again.

The way I see it, the level crossings were bottlenecks to increasing rail frequency. With no boomgates holding back cars, more trains could run without worrying about cars being held back for too long.

Train (driver)s don’t worry about long lines of cars being held back at boom gates, they only worry about the cars that are on the other side of the boom gates and hoping the they won’t still be there when the train goes through five seconds later.

Level crossings are not bottlenecks, just annoyances. The real bottlenecks on the network are where trains are stuck waiting for other trains to clear the line. Even the tram squares at Glenhuntly, Kooyong and Riversdale aren’t really bottlenecks, just slow points, which really isn’t much different to a train wiggling around all the 30 km/h points between Richmond and Flinders Street (e.g. an up Pakenham being moved across to enter platform 9) while watching a Burnley group train race past in the same direction at line speed.

WHEN IS THE LAST TRAIN?

I, like most train buffs, are keen to be on that last train of which goes through the old Noble Park.

However, being able to get the details of this, is just not possible.

First off, the use of Monday in the media was really confusing. Did this mean, Monday was to be the last day with, or did they mean Monday was going to be the first day of when the wig wags would never again function at that location.

The level crossing authority, seem to think, trains are going to continu until the 15th of Feb, and they have no idea whatsoever as to when the last train would be. That is something I need to ask Metro they said.

I have sent an enquiry to Metro on Friday, and am yet to get a response from them. Seems they dont have a clue either.

Compare this to/with the Geelong V/line trains changing from via Werribee to via Tarneit. We knew everything, and I was there on the first and last, in each direction.

@TranzitJim, the LXRA provided this info:

Early next week the last ever trains will run through the existing Noble Park station passing by level crossings at Corrigan, Chandler and Heatherton Roads.

The Premier recently announced that following an upcoming construction blitz (30 January – 14 February ) the existing station and level crossings will be history and trains will be up running on the new and improved elevated rail line.

This is a great opportunity to say farewell to the old Noble Park Station. Train times are as follows:

We will have photographers on hand to capture this moment, but we also encourage you to get out there and witness this historic moment for yourselves.

Thanks for that information Daniel.

Are you sure the times above are correct?

I have printed off the timetable for the 30th Jan and 1st Feb.

On the DOWN (#2),there is a train due at 12:58, 10 minutes later than the time you specified, and is the last train on that timetable.

I have just noticed, the H at the top, meaning, rail replacement bus.

Arh, I have given up on trusting the PTV on anything.

UPDATE: I have checked the online timetable, and the times do seem to line up there.

So, if we get on that at Dandenong departing at 11:13, stay on that through the city loop, and be on the last outbound as well.

Just to be sure, I will be changing at Richmond???

@TranzitJim: “I have printed off the timetable for the 30th Jan and 1st Feb.”

These dates are not relevant.

The last trains are on the evening (including after midnight) of 29th Jan.

So, as we sit here today, now, on Monday, the last train has gone through?

It seems that, this was a rushed announcement. There was no organisation or proper presentation of the facts about the last train timing.

No Jim. The evening of the 29th. Tonight.

TranzitJim, trains are still running today. Because there were replacement buses on part of the line yesterday, and again from tomorrow, there is a 29 January 2018 to 29 January 2018 timetable on the PTV website. This includes both the services that the LXRA have advised.

Ok, I had something of a seniors moment today I guess.

I am going to blame it on the fact that, my room is not air conditioned.

I do stand corrected in respect to the date. Tonight, I fully intend on catching both of those last trains.

I was the only passenger on that carriage. For the whole trip into as far as South Yarra, and had the carriage to myself for the Noble Park section to myself again also.

I was not only on the last train, I was in the last carriage, and the last passenger too.

I have taken window video of the arrival and departure on the last down service.

Any update on when the skyrail will open to the public?

Please keep me posted if you get any further information in this respect?