Thursday’s awful incident brings back memories of January’s attack, and authorities are rightly saying that it will be investigated from all angles.

One issue is road infrastructure that allows a vehicle to reach high speed in a constrained, pedestrian-dense area like Flinders Street.

The speed limit is 40. But apart from the placement of tram superstops (one of which finally stopped the vehicle) there’s been little change to this section of road in decades. It’s wide and straight, with no form of traffic calming; no speed humps or other treatments that you might see in a suburban school zone, for instance.

Not that the road was clear. The traffic was apparently congested, but the driver apparently veered out onto the tram tracks to speed towards the intersection.

“[Melbourne] has big wide streets, wide footpaths and of course, it has trams, and the tramways enable a [car] driver, as this driver did to pull out of stopped traffic, get into the tramway and then make an attack. This is an issue for protecting, for example, the Bourke Street Mall.”

In Flinders Street, it shouldn’t be too difficult to make it harder for motor vehicles to get onto the tracks. A small separation, preferably with the tracks raised slightly, would do it — such as this design I spotted in Brussels in July: 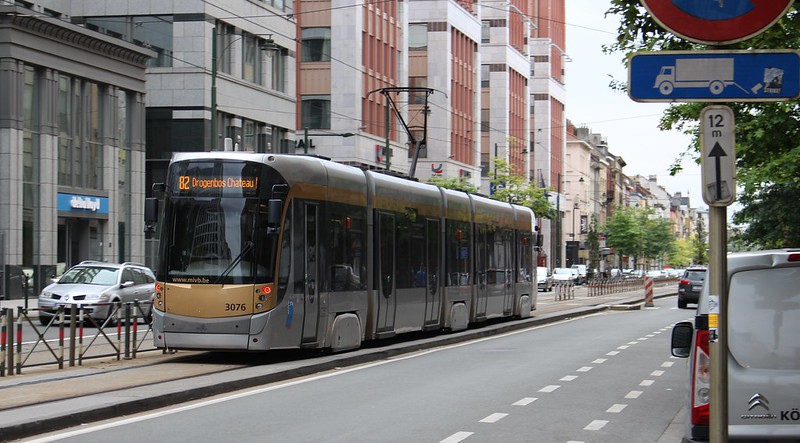 The beauty of this design is that it helps stop all sorts of unauthorised vehicles getting onto the tracks, or turning across them. This would improve tram safety and cut delays to trams.

It does come at the cost of convenience for some motorists (frankly, not a priority in the city centre) and making it trickier for emergency services to use the tram tracks, as well as limiting where people with wheelchairs or other mobility aids can cross. These issues would need consideration.

Apparently none of this is impossible to resolve, because you can already find this design in central Melbourne — in Spencer Street: 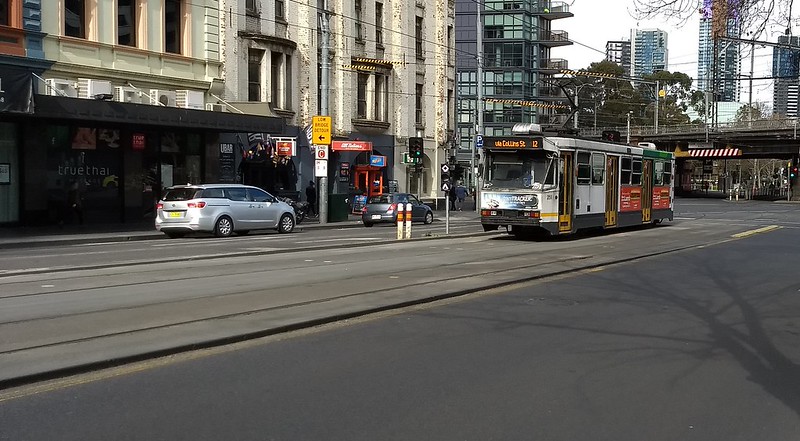 Depending on the precise design, it doesn’t make it completely impossible for a vehicle to get onto the tracks, but it could make it a lot more difficult.

The PM is right to note the Bourke Street Mall presents some challenges. But it would be wrong to assume it can’t be solved.

Permanent bollards have recently been placed either side of the tramway, at both ends. 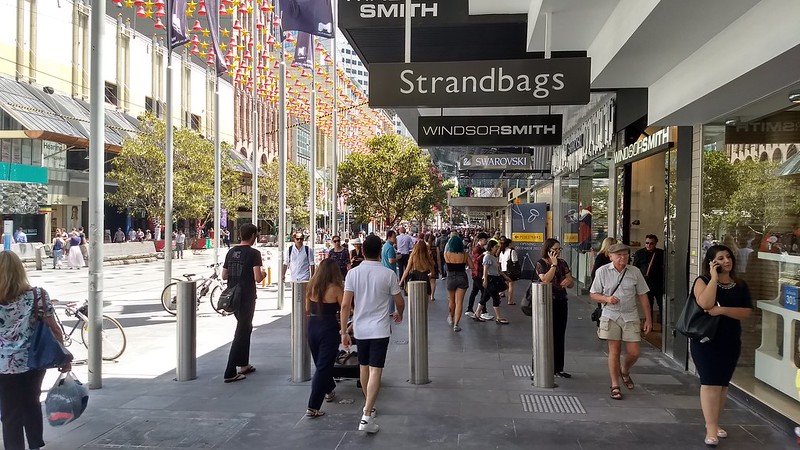 But the tramway itself remains open — to trams, obviously, but also to other vehicles, including unauthorised and/or clueless motorists.

What do other cities do? Some of them use retractable bollards, to let through only authorised vehicles.

Here’s a quick video of them operating in Cardiff. This is the main bus route between the city centre and Cardiff Bay.

This has potential, though in this case, you can see it’s a little problematic:

It’s far too slow to respond. I assume it’s controlled remotely from an operator somewhere watching on CCTV. To cut delays, the bollards should retract as the bus approaches, not wait for it to stop and wait.

If bollards like this were placed at either end of Bourke Street Mall, hopefully engineers could come up with a system that sees them retract automatically as trams approached or waited in the tram stop.

Another issue might be the risks of putting them in areas of heavy pedestrian traffic. Careful placement (between tram stop platforms, or away from the footpath, on the edge of the intersecting roadway) might resolve this. 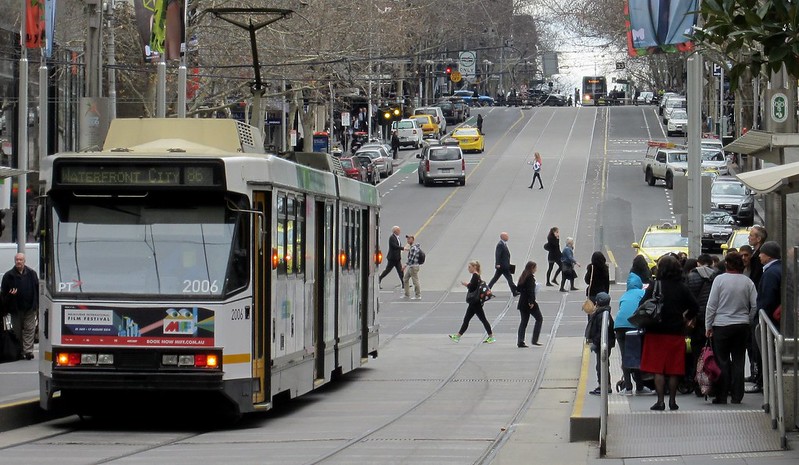 Getting this right brings numerous benefits, not just for safety from vehicle attacks, but also keeping pedestrian areas free of unauthorised vehicles, and also preventing them disrupting trams.

Authorities shouldn’t give up. Other cities have solved similar problems. I’m sure we can too.

11 replies on “Some thoughts on CBD street design and safety”

You don’t need to go to Spencer Street to find the raised strip at the side of the tram tracks, just east on Flinders Street to Russell Street.

Looking it up there is a distinction between tramway (double yellow lines or raised strip) and a tram lane (solid yellow line). In either case a solid line means no u-turns and between Russell and Queen are only a handful of legitimate reasons to turn right across the tram tracks, I would be happy for it to be tramway all the way along, maybe with a couple of clearly defined exceptions. Although a raised curb wouldn’t stop a determined driver…

On my way to/from work I have seen plenty of drivers get frustrated by the traffic and make a u-turn, often with a near miss of other vehicles or pedestrians. When I first heard the news of this incident that was my first thought, not terrorism, more likely a tragic decision from a frustrated driver…

Any mention of retractable bollards makes me think of a video I once saw of the ones in Manchester, a search brings up the video I remember of cars hitting the bollards, but also articles about buses and fire engines also hitting them. Any issue with a retractable bollard could have a huge cascade impact on the tram network…

There’s nothing difficult about securing tram tracks. Just use a pit. Think of it as an inverted speed hump.

The tram rolls through on the rails; vehicles can drive through, but not at any speed. That’s all you need.

No, raised tracks are not going to stop anyone determined to cause mayhem and nor are slightly sunken tracks. Traffic congestion protects our city roads from car assaults quite well but not our tram tracks. I think Andrew above might be on the money. Emergency vehicles can still get through, albeit slowly at times, but no car on the tram tracks can get up to speed. But, we work out how to protect one area, others are vulnerable and we don’t want to see our city turned into a fortress against attacks. We may have already gone too far with ugly concrete blocks, which have recently appeared at Luna Park. What is to stop a terrorist or someone with mental health issues throwing a balloon full sulphuric acid down on the crowds below from Young and Jacksons rooftop cider bar?

Below where I live, in the am peak, perhaps 40 pedestrians cross the intersection in a single traffic light cycle. How can they be protected from a rogue car driver, or the so called lone wolf terrorist? They can’t. This a problem of society and has to be dealt with by our immigration, police, intelligence, mental health, drug authority, etc. Essentially the governments on all levels. We can’t all carry out own personal bollard around in front of us.

Pavement design can also be used to slow down vehicles and make it impossible to drive at high speeds (and moderately uncomfortable at medium speeds). An undulating pathway pattern along Bourke Street mall would for example would reduce the ability for a car to travel at speed, but trams would be completely unaffected.

Two more options to render tram tracks unusable for road vehicles are ‘sump busters’ – this example is from the O-Bahn busway in Adelaide:

The other is sunken tracks, like on the Gold Coast Light Rail:

I really don’t think rising bollards are needed for the Bourke St mall; they just need to line the length of the tram track in the mall with the same silver bollards that they’ve placed up the end, spaced widely so that pedestrians can walk through. Hence, any car that makes its way into the mall can’t go anywhere except on the tram tracks.

I think that the grass around tram tracks system, used in Whitehorse Rd most of the way between Elgar Rd and the terminus, would be a good treatment for wherever traffic is not allowed on the tram tracks. It would not only probably slow any vehicle traffic on the tram tracks but also reduce the urban heat island effect and flash flooding.

speed bumps are the last thing you need when scanning for pedestrians jaywalking from 6 different directions.

“What is to stop a terrorist or someone with mental health issues throwing a balloon full sulphuric acid down on the crowds below from Young and Jacksons rooftop cider bar?”

Try buying sulphuric acid in Australia. Good luck with that.

I need some for some art metalwork. No can do.

There are better ways of communicating between vehicles and infrastructure now, so buses and trams (and other legitimate vehicles) could certainly activate retractable bollards at their normal operating speed in places like Flinders Street. The 5.9 GHz band is reserved for DSRC (dedicated short-range communication) to enable ITS implementations (intelligent transport systems) like this, but the trouble is that this kind of thing is always theorised and written about, presented at conferences, discussed in journals and at seminars, and never actually deployed on a large scale to make a city work. Loops are a good method for making sure no vehicle is above the bollard before deploying it, but have been superseded for most other applications because we now have DSRC.

On Flinders Street and others like it, where cars aren’t allowed on the tram lines, bollards would be useful in blocking intersections to prevent what we saw before Christmas. It would still be possible to drive on the tram lines by entering them at any mid-block location, but the trip would end at the next intersection. And pedestrians are most likely to be present at the intersections in congested conditions, so the treatment would be effective. Pedestrians won’t be in the middle of the blocks because those areas will be full of cars or trams.