Thoughts with the friends, family and colleagues of Fiona Richardson, who sadly passed away yesterday. She got stuff done in her Prevention of Family Violence portfolio – it was impressive to see. I met her a few times when she was shadow public transport minister. I’m sure she would have shaken things up in public transport too, given the chance. RIP.

The Herald Sun reports (paywall) that public transport usage continues to grow, with 233 million Metro train trips in 2015-16, up about 11 million in five years. 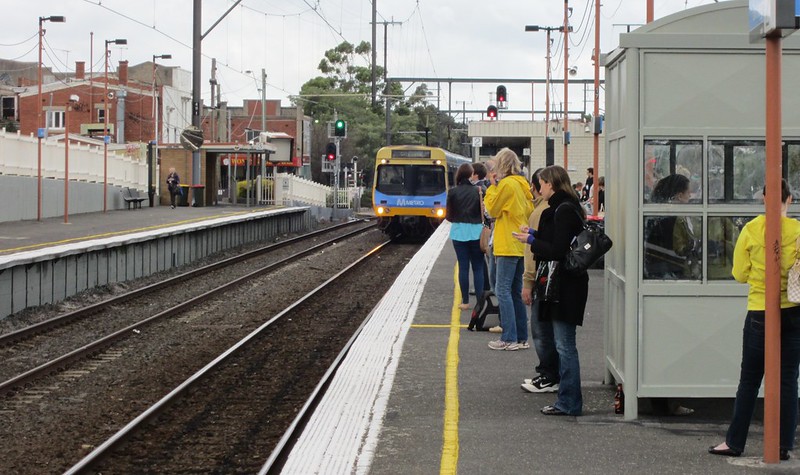 One basic measure of whether services are keeping up with demand is: how many trains serve your station?

With a new revised 2017 timetable just around the corner, I’ve compared timetables at my station, Bentleigh, during morning peak. I’ve included a variety of timetables going back to 1990, with one from 1939 thrown in as well. 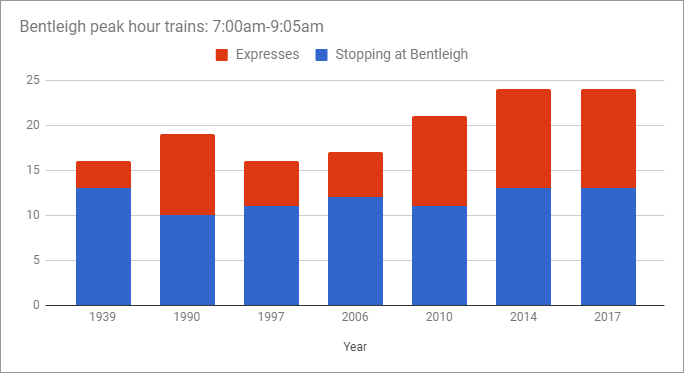 Amazingly, in 1939 there were the same number of trains departing Bentleigh to the City between 7am and 9am(ish) as there are now: 13. (I’ve made the cut-off 9:05am because a couple of trains come in just after 9am.)

These days, there are also a large number of peak hour expresses skipping Bentleigh. This is a factor, because they take the bulk of the passengers from the outer stations, leaving more space for passengers at the inner stations on the remaining trains.

There was a dip in the number of trains in the 1990s. I suspect this was due to the wide-ranging cuts made following the election of the Kennett Government in 1992. Since 2006, it’s been climbing again.

Capacity can be altered in ways other than additional trains. In the past couple of years, some seats have been removed from Comeng and Siemens trains, with the load standard (number of people in a moderately crowded 6-car train) going up from 798 to 900 people.

At this point, some readers’ eyes will glaze over… yes, it’s Neville Shunt time — let’s look at the specific train times:

I’ve used the times for Bentleigh here, but since 2010, exactly the same trains serve four of the top ten stations on the line: Glenhuntly, Ormond, Bentleigh and McKinnon.

Up until earlier this decade, there were some big gaps, up to 17 minutes in some cases. The longest gap in peak is now 12 minutes, which helps with waiting times and crowding. If they can keep reducing the gaps between trains, that would help a lot.

The high(ish) frequency of every 10-11 minutes continues until 9am when the 10 minute off-peak services kick in. If you usually travel earlier than 8:30, you might not realise just how crowded these trains get. There’s now a lot of demand after the “peak of the peak”. More people catching a train at 8:45 means fewer at 7:45. Frequency all day helps spread the load. (If you ran a cafe, you wouldn’t want everybody coming for lunch at precisely 12:30.)

High frequency is particularly important to cut waiting times for people who may not have control over what time they arrive at the station, for instance coming off a bus, or driving through unpredictable traffic to get there. It also provides for the car-like freedom to leave when you want to, not when a timetable says you should (aka Frequency Is Freedom).

Reducing gaps also helps when cancellations occur. Any cancellation results in gaps big enough that there’s a long wait, and people get left behind at some stations on the next train/s. This from Monday:

The 1990 timetable had a confusing mix of direct and Loop services. Making people choose like this adds to confusion. If people decide they always want one or the other, it effectively halves the frequency for them. Consistency is better.

The 1990 timetable also had some trains starting at Cheltenham and running express Malvern to Caulfield, then direct to Flinders Street. This was very poor use of train and track capacity, having those trains pick up at so few stations. At the time, services from Oakleigh on the Dandenong line picked up at Armadale, Toorak, Hawksburn, but an explosion of patronage on the Dandenong line means Frankston line trains now have that task.

Until 2010, there were a couple of trains express from Bentleigh to Caulfield to South Yarra. A quick ride, but only if you got to the station at a very specific time, and it wasted the third track’s capacity.

The timetable from next week adds another minute to the running time into the city. A full five minutes will be allowed from Glenhuntly to Caulfield. Hopefully rather than being another case of timetable padding, this disappears again when the stop at Southland is added in November, though it shouldn’t have affected the trains that only run from Moorabbin to the City. Meanwhile, maybe we’ll see an uptick in Frankston line punctuality in September and October.

It’d be good to see the next step in adding services to this line, to cut crowding and wait times further. That may require moving Frankston trains out of the Loop — perhaps the next logical time to do this is when the Dandenong line capacity gets beefed up when the level crossing removals are completed and the new High Capacity Metro Trains start service.

(I’m sure it hasn’t escaped authorities’ notice that a number of people already change from inbound Frankston Loop stoppers to Dandenong line Loop expresses to save a few minutes in the morning.)

Of course, looking at one station is a very limited way of looking at services vs demand.

I might try this again for a station in a growth corridor. Somewhere like Werribee or Craigieburn would be particularly interesting – until recently these were regional stations.

And stay tuned for something more high-level.

8 replies on “Trains in peak hour – are they increasing?”

A few questions from the ignorant…

How much has the capacity of trains increased in the last decade? Are they running different stock on this line?

And is this frequency near the limit of the Loop? Do we need to wait for the Metro Tunnel completion nine years from now before it can be increased?

All the Caulfield-Cheltenham expresses are increasing from 12 to 14 minutes duration with the new timetable.

I wonder if Malvern has more significant patronage than say Armadale or Toorak, to justify continue running trains express Malvern to South Yarra rather than Caulfield to South Yarra as on the Dandenong lines.

Have you notice much increase in station patronage since the level crossing removal and station rebuilds at Ormond, McKinnon and Bentleigh ? Ormond would be particularly interesting because it has station entrances on both sides of a wide road, and frequent buses connecting with Monash Uni, which could also act as feeders for city-bound commutes. The road crossing may have put off some of this connecting patronage previously

It was always an unrealistic prospect to add a station and not have times continue to blow out. I recall that the PT minister had originally promised no increase, but obviously reneged upon receiving better advice.

That aside, it’s a real problem that express services are also blowing out. Coming from Frankston is already a long journey even with the few select express trains. This is as a result of the short third track, the tram square at Glenhuntly, and the stopping pattern mixing between Caulfield and South Yarra.

I would argue that with the construction of Southland they should have at least extended the third track to Highett to preserve times. Ideally all the way to Cheltenham as any sane person would have done in the first place.

“from departing Bentleigh to the City”? Typo?

@George, the seat changes I mentioned have altered capacity. (Off-peak, consistent use of 6-car trains instead of 3 has also helped, but this has always been the case in peak.)

Most of the Loop tunnels are close to capacity, but many of the direct tracks aren’t. This blog from a couple of years has details.

@Malcolm M, good question. I’d expect some growth due to apartment developments around the station. Hard to say if the station changes themselves made a big difference yet. Perhaps over time. It’ll be interesting to see the next update of official station patronage stats.

Southland Station is likely to increase the patronage of Bentleigh and surrounding stations as they will have an excellent service to/from Southland for most of the normal operating hours of Southland. Bentleigh-Southland will be only 8 minutes by train and the 10 minute frequency will make it very competitive. The extra patronage will mostly be counter-peak, inter-peak and weekend daytime and thus there will be plenty of space.

Southland may also tip the balance in favour of slightly extended express running hours and extending the length of the stopper services.

The tram square makes abolishing the Glen Huntly Rd level crossing (and thus also the Neerim Rd level crossing) a priority (probably the highest after the Dandenong line in railway priority). It is a real disappointment that the current government has not included it in its plans.