As you can see, my second Tweet was just as compelling:

is thinking about another cup of tea

This was all pre-smartphone (at least for me) though some the Nokia phones I had until 2011 could do Twitter.

At the time, I don’t think Twitter could do pictures. And links took up a lot of space from the 140 character limit unless you used a 3rd-party URL shortener — many of these have since gone bust or dumped those early links, so many old Twitter links are now dead.

Here’s what my Twitter timeline looked about a year later, in late 2008. Looks like I was still sometimes posting in “Daniel is” IRC-style. (This is via the Web Archive, so the timestamps are all wrong.) 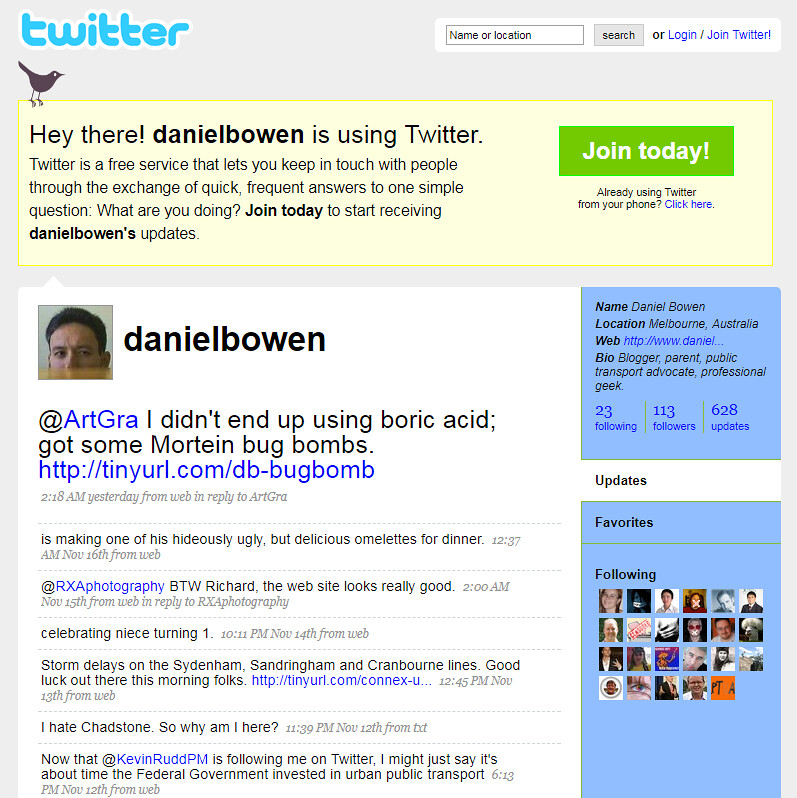 Social media networks tend to reach a critical mass of users that encourages more people to get on board and post.

What’s fascinating to see is Twitter has become ubiquitous in areas such as breaking news. Journalists in particular love it – I assume as a trend it spread from the USA. Looking at Australian journalist profiles, there seems to have been a rush onto Twitter in about 2009-10.

I'll be honest, these new @abcnews titles are taking some getting used to. It's like the vertical hold needs adjustment. pic.twitter.com/qb9sYeQG9p

No doubt thanks to PTUA work, I’ve got about 5800 followers. This is nowhere near as many as a lot of other people have, but apparently it is in the 99th percentile of active Twitter accounts.

Then again, on a system where apparently 391 million accounts have no followers at all, perhaps it reflects how many fake or robot accounts there are on the system. That’s okay, TwitterAudit reckons most of mine are real!

Apparently 162 of you are not real. pic.twitter.com/6GwPUDrYvW

How to use social media is up to you

I’m personally not keen on the lengthy threads some people post on Twitter – they can get initial attention, but long-term are very difficult to find later — which can be frustrating as often they are full of excellent insights into the issue at hand. My view is post it on a blog somewhere, and link to that.

But ultimately, how you use social media is up to you. And who you follow will obviously influence what you see.

The major social networking systems each have their place, and I use them in different ways:

I use Twitter for following news, and “public” stuff.

I glance at LinkedIn sometimes, but restrict it to people I know via work and PTUA interactions.

Google Plus? I barely ever look at it. 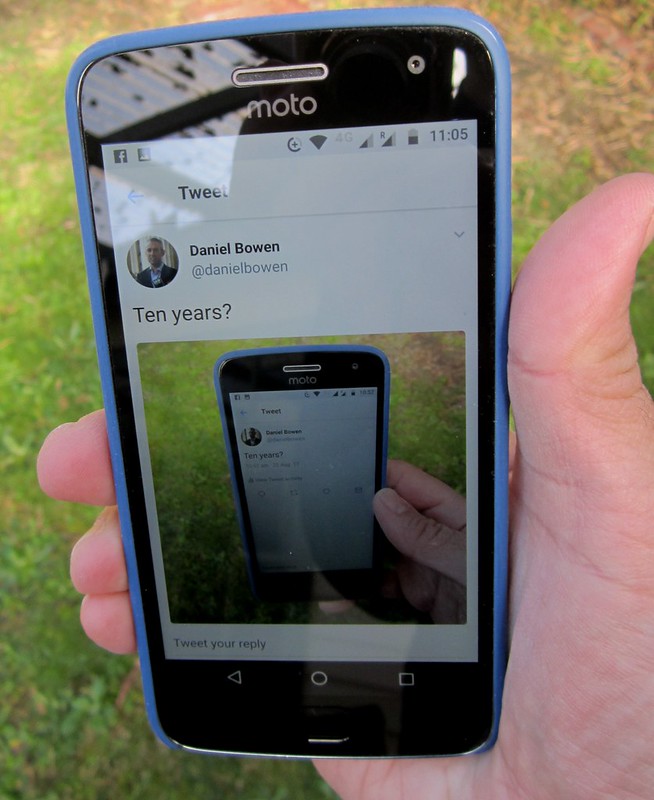 One side-effect of Twitter is that I’m probably blogging less. Often I’ll fire off thoughts as one-liners rather than develop them more fully into blog posts. Kind of a shame, but it also reflects that I’m far busier now than I have been in the past.

Something I do like is a lot of prominent people are on Twitter, and many of them will respond to questions from randoms like me. (In turn, I try to respond to others, but sometimes there just isn’t the time.)

And if you’re wondering, apparently this is my most re-tweeted ever — a comment on US conservatives’ reactions to the US Supreme Court ruling that same-sex marriage is legal. Apparently it was pushed along by being included in a Buzzfield article.

Conservative Americans considering moving to Australia might like to be aware of our extensive gun control and universal healthcare. #SCOTUS

As a time-waster, social media is probably unparalleled. But it’s fun, and informative.

So I’ll keep on using Twitter, and if you’re on there too, feel free to follow me!

One reply on “Ten years twittering”

“Jacob is watching cricket”. I think that must have been the default template for writing things on Facebook in 2007. “Daniel is…”