Before we headed back to Australia, one more day in London to explore… at least for most of us. Three of us were catching an evening flight, but M had to head back 12 hours earlier, departing on a morning flight. I walked her to the station and helped her (and her luggage) get on the right train to the airport.

For the rest of us, we packed up all our stuff from the Air BNB flat. Just our cases were left, by arrangement with our host to pick them up later.

So, how to spend the last day?

I had in mind to head south of the river to Croydon. The District Line wasn’t running for the weekend, due to works. Note in this photo in the top-left you can see me on the CCTV, taking the photo… 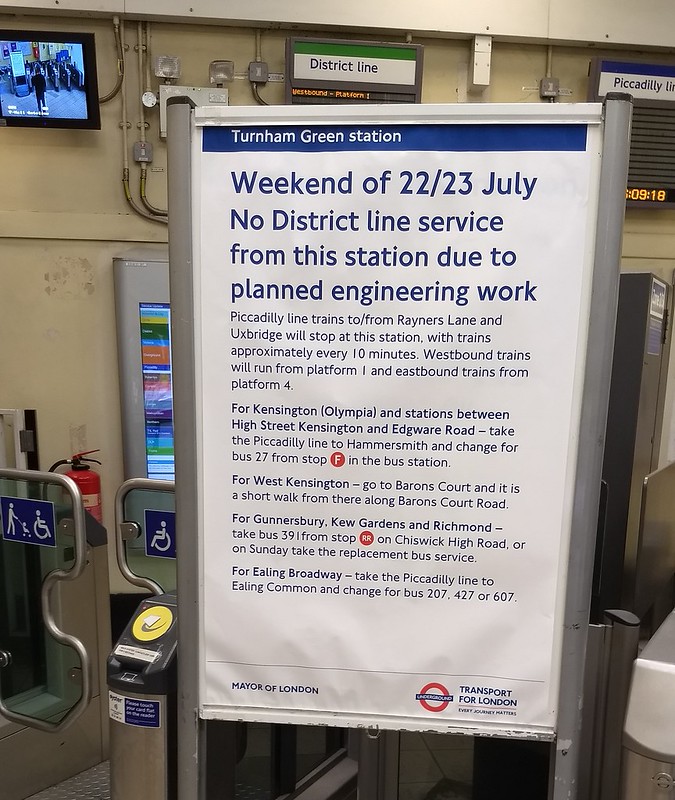 So instead, using Google Maps as a guide (again!) we caught a bus east to Shepherd’s Bush.

Notably, the bus lanes were plentiful (and enforced by cameras), and automated signs inside the bus advised passengers of the District Line disruption. Ever seen that on a bus or tram in Melbourne? 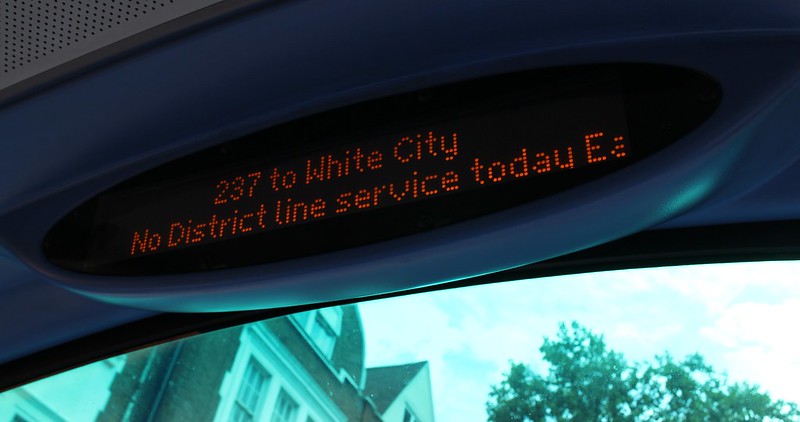 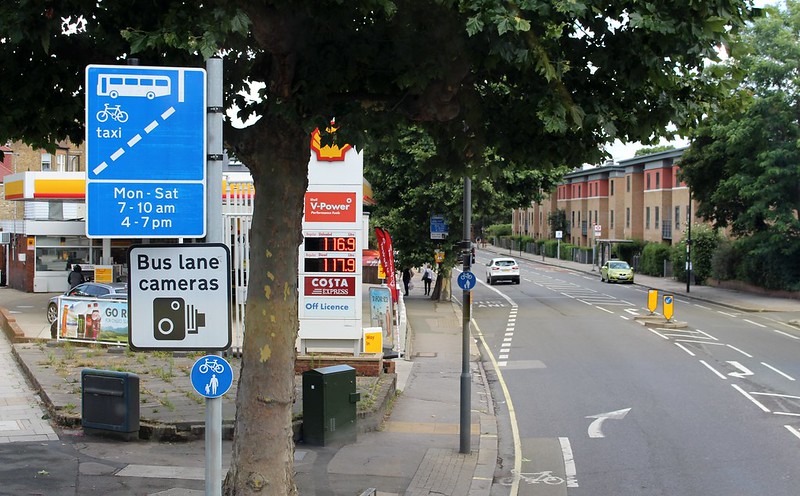 Overground has branding similar to the Underground, and is moving to more frequent trains, mostly now every 15 minutes. The lines form a set of mostly orbital services around much of London – a couple of the services go into the central city terminus stations, but they’re not the main emphasis of the network. 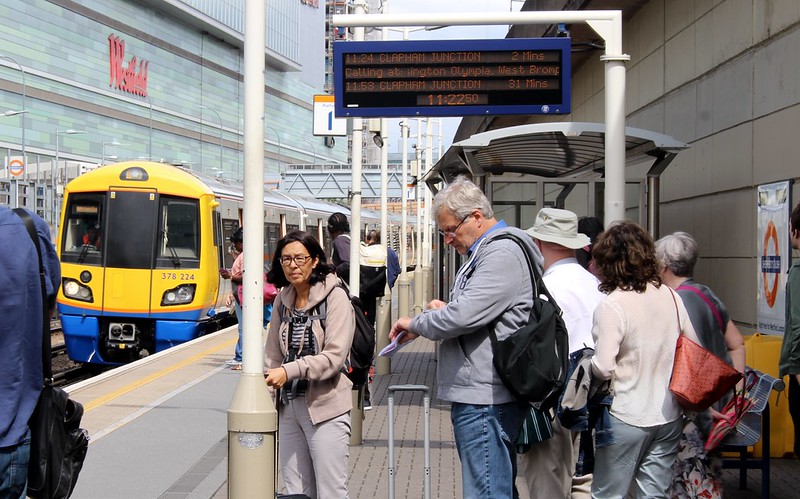 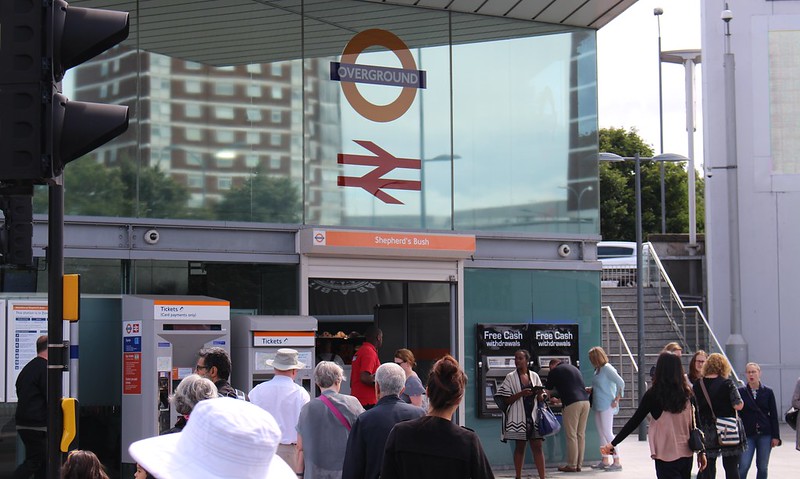 The pace of the Overground train seemed slower than the Underground – this was part of what prompted my blog post about the disadvantages of sticking strictly to a timetable.

From there we caught an express train to East Croydon.

Many suburban trips in London are actually served by long distance trains; this one was heading to the south coast somewhere, and had first class accommodation (within the carriages, not in separate carriages) and toilets aboard.

The conductor came through and checked tickets – some passengers were travelling on those orange National Rail tickets you see everywhere around Britain, some like us on Oyster and credit cards – for which he had a reader. 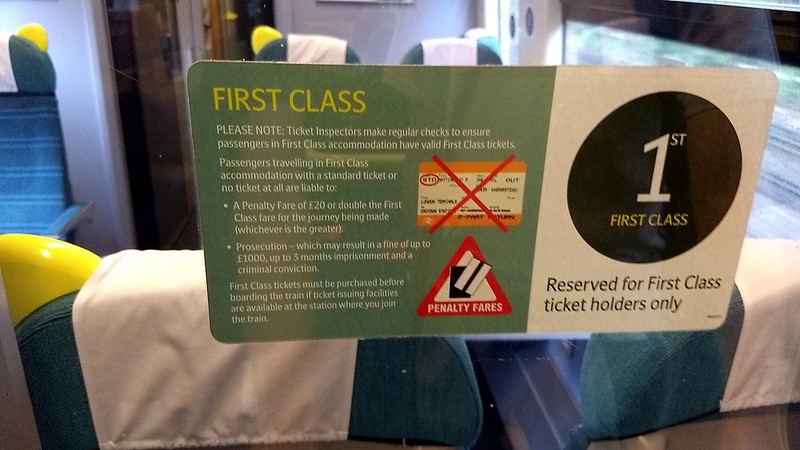 Also notable on that train was emergency information above the doorways, including the advice to stay on the train unless advised… but if you needed to evacuate, detailed instructions for doing so. I wonder how often it happens.

It was pouring down with rain when we got to East Croydon station. We exited the station and hopped on a Tramlink ummm… tram — it was so quick I didn’t even snap a photo of the outside of the tram, but here’s one of the interior: note the step; the design is mostly low-floor, but not 100% low-floor. I suspect this has cost and other benefits, at the expense of not being entirely accessible. 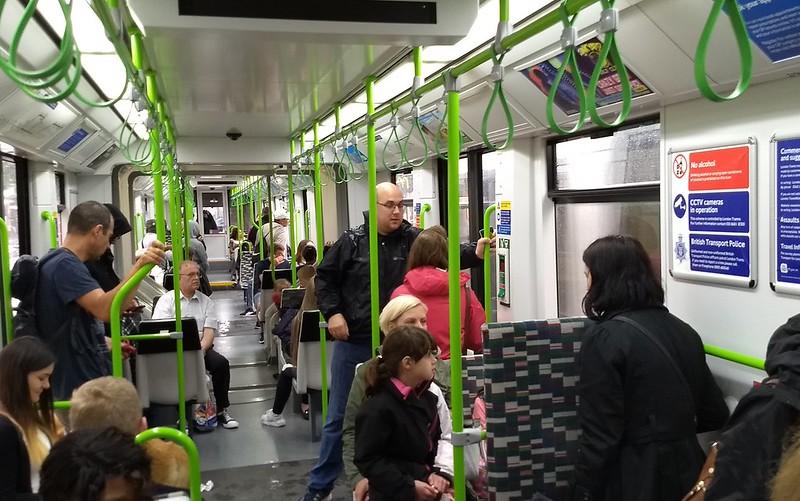 We caught the tram just one stop to North End, where the main shopping area is located.

My goal was a place called Heart Of Gaming in the Whitgift Centre. I+J weren’t that interested, so they looked around while I paid £10 to play some video games for a while. It was good fun, though I’d really been hoping for 80s games – these were mostly 90s. (Memo for next UK visit: Visit Manchester)

We found some lunch nearby in some coffee/sandwich shop, which was cheap and quick, though a bit crappy.

No matter, we decided to head back into Central London. West Croydon station was slightly closer, even if the trains were less frequent and slower, and at least it had stopped raining.

The suburban train took us back through Clapham Junction, past the remains of Battersea Power Station – I remember when it was a huge and imposing monolith; now they seem to be only leaving the facade as they redevelop the area. 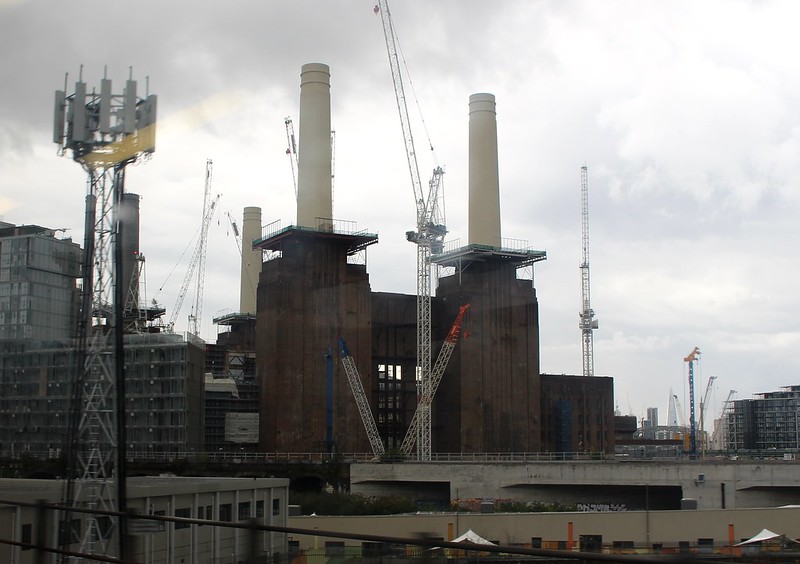 We arrived into Victoria Station, and had planned to catch a Tube up towards Oxford Street, one of central London’s main shopping streets.

No go. As you sometimes see on those Tube documentaries I’m so fond of, they’d closed the entrance to Victoria Underground Station. It wasn’t obvious why – but the queues to get in made the impact obvious. When it eventually re-opened, there’d be severe crowding while the backlog of people cleared. 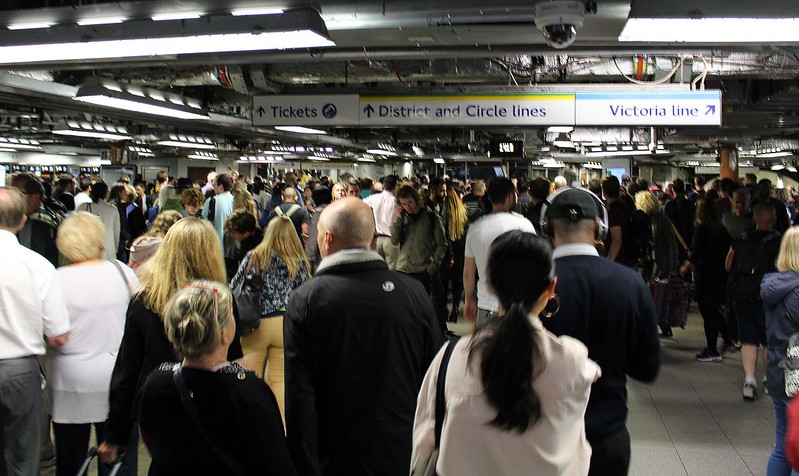 Bus seemed like a better option in the circumstances, and might well get us closer to where we wanted to be, as we had a couple of specific shops in mind. As I’d learnt the day before, to the outsider, the central London bus network is confusing mess of spaghetti.

Google Maps saved the day yet again, telling us which route to catch, and the frequent service meant only a couple of minutes’ waiting. In fact, for all our roaming around on this day, we didn’t wait more than five minutes at any one point. As they say in public transport advocacy circles, Frequency Is Freedom. 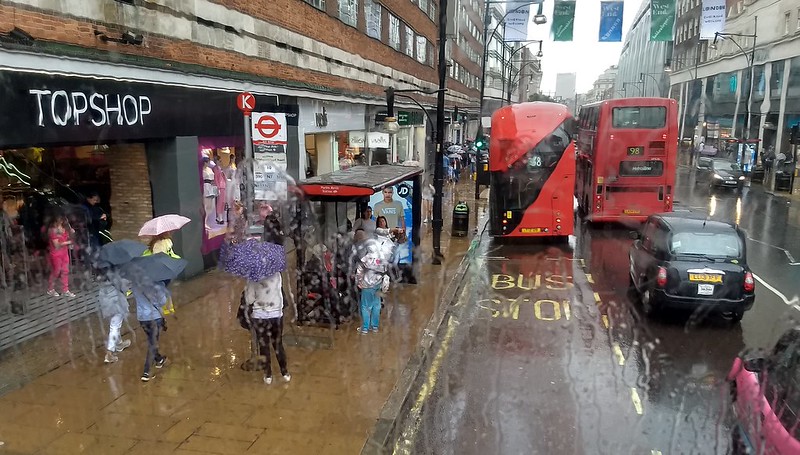 The rain was really coming down now. It was the first really bad weather on the entire holiday – must be a sign that you should go home.

We hopped off the bus in Oxford Street – J wanted to look in the Doc Martens store.

After that we continued exploring and walking, but at one point took shelter in a John Lewis department store, which allowed us to re-fuel with a cup of tea and a muffin, and use the facilities. 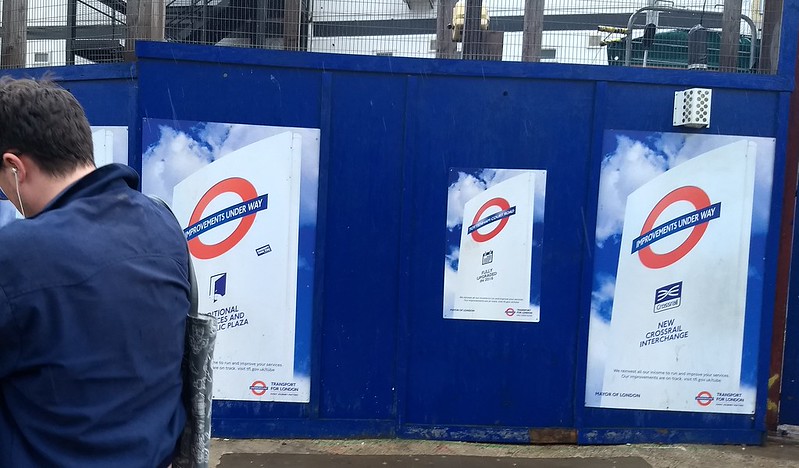 The rain had slowed to a drizzle, so we continued on, passing one of the Crossrail construction sites. It’s a huge project, and the new stations are expected to start opening in 2018.

And so to our ultimate goal: the Forbidden Planet London Megastore. 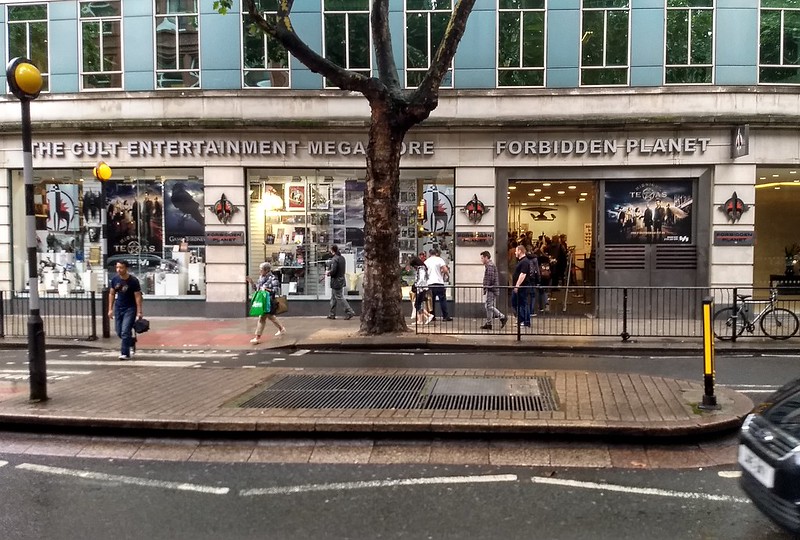 It’s like Minotaur books in Melbourne, but more tidily organised, better stocked, and not as dark. We spent quite some time browsing its shelves, particularly the books and CDs, where we found numerous titles I hadn’t seen available in Australia. (In contrast, most of the other merchandise looked fairly familiar.)

I bought myself this: Space Helmet For A Cow: The Mad, True Story of Doctor Who (1963-1989). A very amusingly-written history of the TV show, which I started reading on the way home. Highly recommended for fans of the show; I’ve subsequently been given volume 2 for my birthday, and am enjoying that too.

From there, we headed to Covent Garden, where we’d visited on our first (proper) day in London. J found another Doc Martens store (he was looking for a specific design) while I ducked back into the London Transport Museum to buy that District Line cushion I’d been coveting.

It was expensive (£45), but it was unlikely I’d be back anytime soon to be able to buy it. FOMO. It appears to be genuine moquette, so it’ll probably outlast the couch and everything else in the house. 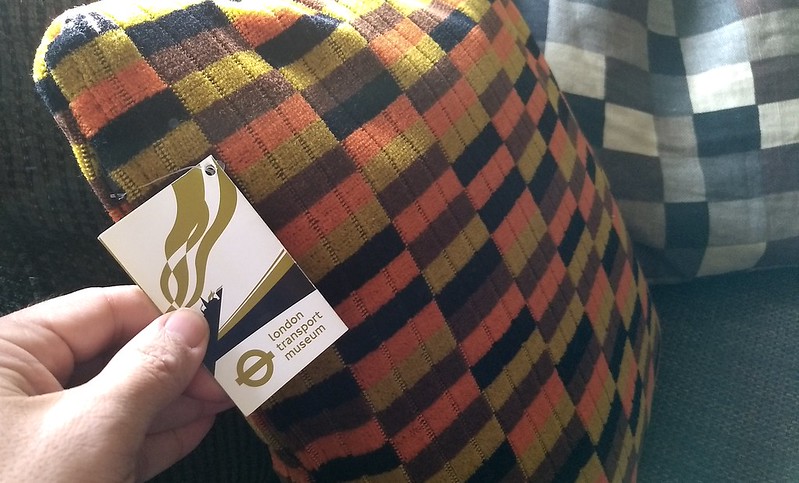 There was also a book in the Museum shop that I’d noticed, but it was bulky and heavy and also expensive, so I’d ended up ordering that online. It arrived back at home a couple of weeks later: British Rail Designed 1948-1997. I’m so far finding it a good read if you’re interested in design and railways.

But there were lots of other goodies. Honestly, if I didn’t have my head together, I could do an awful lot of damage to my credit card in there. 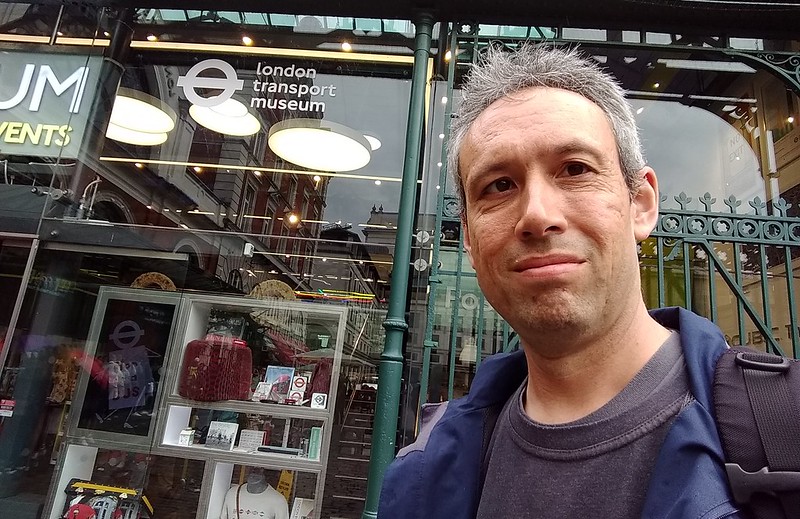 It was 5pm, so we hopped back on the Piccadilly Line to head back to Chiswick/Turnham Green.

(Most of the time, only District Line trains serve Turnham Green, but due to works, those weren’t running, and some Piccadilly services were stopping there instead. As it happens, the District Line works ran overtime, and ended up causing huge disruptions on Monday morning.)

Back to the flat, and we picked up our bags and headed to the airport, which was quick and easy on the Tube — despite the warning notice at the station of delays, which I only noticed later was dated a month before. Hmmm… maybe it was relevant but they just hadn’t fully updated it. 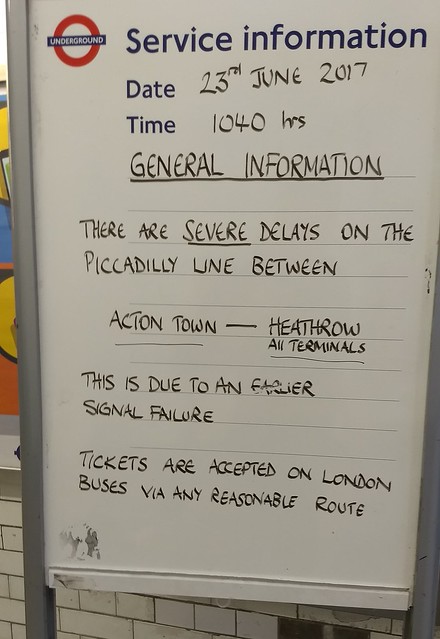 Many of the Underground trains into Heathrow do a loop; terminal 4 first, then terminal 2/3, then back to Central London. We needed T3, and after checking in our bags, we found some food for dinner, and checked emails. 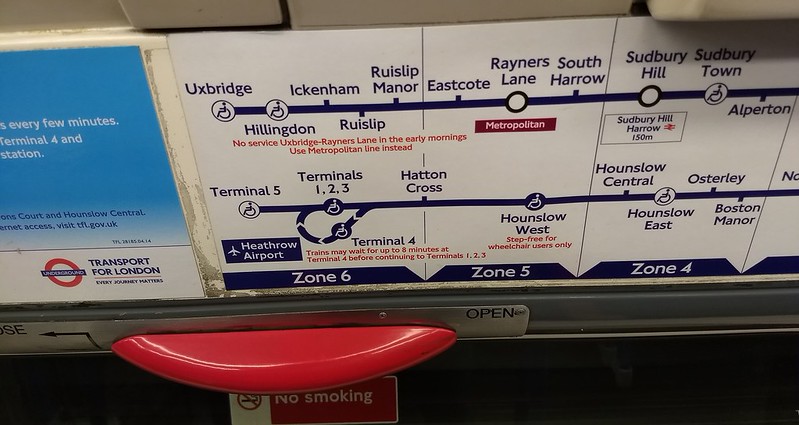 Among the emails, I found one just in from a contact at London Underground. Alas, I hadn’t thought to email him about being in town until after I’d arrived. He’d replied that he’d love to arrange to meet up and organise a look around behind the scenes. Too late! Damn. When can I come back???

Oh well. We still had a bit of time to kill before the flight. J looked for a place to charge his phone; I took my remaining UK currency to buy some chocolates to eat on the plane.

The plane took off on time, and we headed towards Singapore.

Will a wheelchair fit between those seats on the tram ?