We’d be leaving Cardiff the next day, so before heading out we decided to get some laundry done. This is one of the benefits of Air B’n’B over hotels – at least if you’ve booked somewhere with a washing machine.

Then, what excursion today? We’d considered trying to get to Llanfair­pwllgwyngyll­gogery­chwyrn­drobwll­llan­tysilio­gogo­goch, which as many would know has the longest place name in the world, though it’s known as the far snappier Llanfairpwllgwyngyll for short. (Disappointingly the long version was made up for promotional purposes in the 1860s.)

Unfortunately, this is right across the other side of Wales, it was almost 5 hours by train to get there. Even driving takes over 4 hours.

Instead we decided on St Fagans museum, just outside Cardiff, which is a kind of multi-timezone Sovereign Hill (but without the gold). On a huge property they have 40-odd buildings from lots of different periods of history, from the Iron Age to the 20th century. 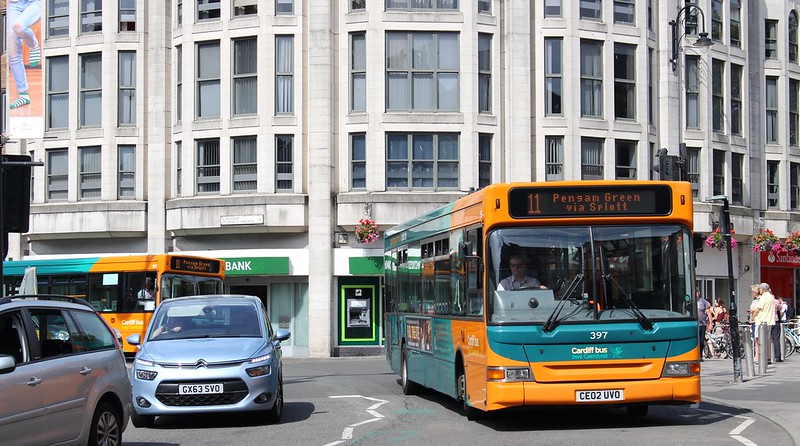 We didn’t catch the bus. I blame Margaret Thatcher.

St Fagans is about 7km from the centre of Cardiff, and the only public transport mode serving the site is local buses.

Most bus services in Britain were privatised in the 1980s under Margaret Thatcher — with London being a notable exception — they have private operators but planned and controlled centrally.

In most of the bigger cities, the network is split into multiple bus operators, and they all do their own thing. In most cases they do not have common fares or ticketing, and in some cities they’ve had disputes to try and compete for customers. As recently as last decade, some bus company managers were jailed due to related unsafe practices as part of their battles with other operators.

Consistent with this model of deregulation, Cardiff has numerous bus operators, and they all have different tickets and fares.

This works against public transport patronage. Can you imagine if every highway and freeway was run by a different toll company, with different incompatible payment options? Or if you could only send SMS messages to people on the same phone network as you? (Actually this was the case before April 2000)

Planning and operating a common network makes it easier for users to use the service, encourages more patronage, and more income for all the operators.

In this case, we wanted to get from Cardiff Bay to St Fagans. Frequent bus route 6 (“Baycar”) run by Cardiff Bus goes to the station (fare £1.80), and connects (in the spatial sense only) with buses to St Fagans run by Easyway. But they are run by different operators, so you pay two fares.

Depending on which bus you catch back, you could be using a third operator (New Adventure Travel), with another separate fare.

Timetable information is easy to find online via Google Maps and the official site Traveline Crymru. But for two of those three operators, fare and ticket information isn’t available (though Traveline are apparently working on it). I had no idea what I’d need to pay. Perhaps about £2, but was it cash only? Did they accept cards? Probably not. Did they give change? Did they accept large notes? What cash did I have on me, anyway?

(Later on I found there is a £8.30 Network Rider Ticket that’s valid on multiple operators… but not all of them. It covers all the operators I mentioned above, but not all their routes… confusing much? And if the plan was for three trips at about £2 each, then that’s not actually a very good deal. And where do I buy this ticket? On the buses, or elsewhere? Oh and by the way, at least one bus operator lists this at the old £8.00 price.)

And the clincher was we were late getting out of the house… so I gave up and called an Uber. It came a couple of minutes after we called it, took about 20 minutes, and cost £16.30, direct off my credit card. For the four of us, not much more expensive than the, perhaps, £14 in bus fares, but also quicker and more convenient. 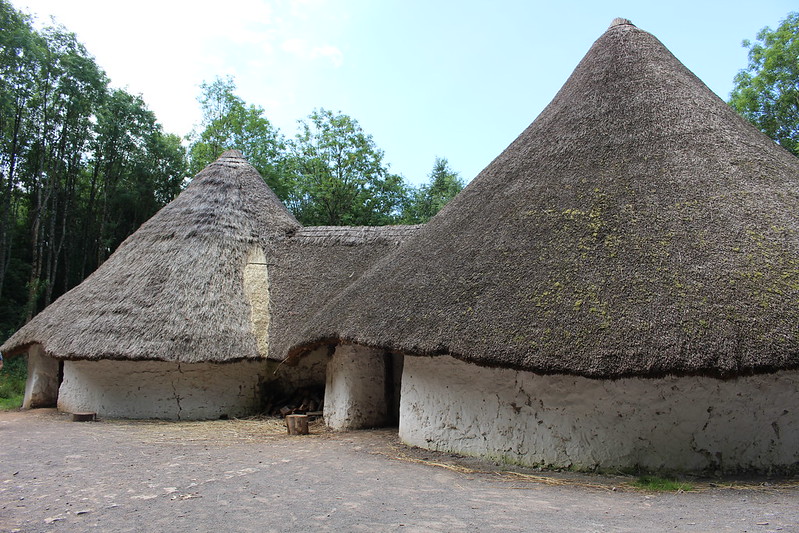 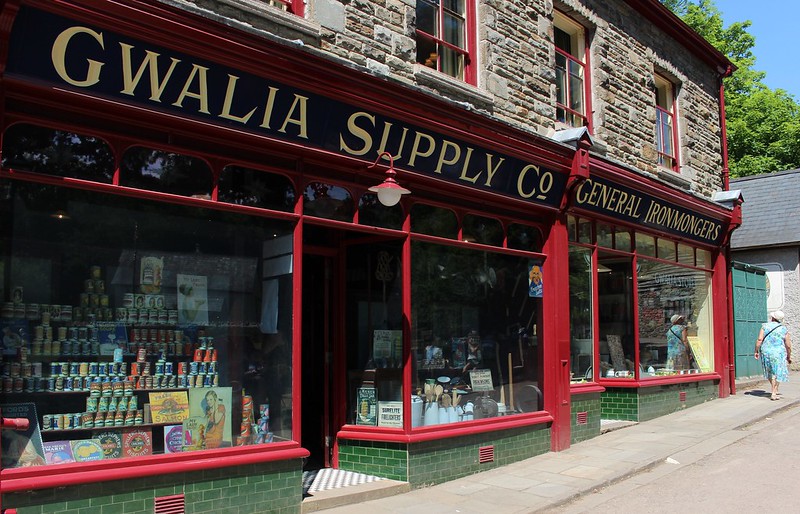 St Fagans, to rhyme with Baggins

We saw various parts of suburban Cardiff on the way to the museum (including, up close, for the first time since our trip started, a British railway crossing – rare in urban areas, but there are a few on the less busy lines in regional areas).

On arrival at the museum, our Uber driver remarked that he’d lived there for 20 years, but “I’ve never heard of this place.”

It was pretty warm, and we did a lot of walking around the museum looking at the various buildings, as well as some amusing placement of (fake, presumably) dinosaur tails. 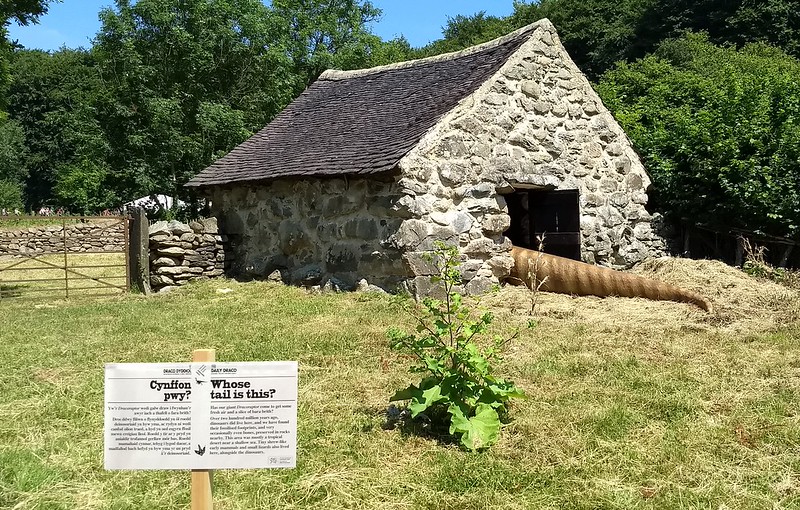 It was kind of interesting. But it’s very widely spaced out. Admittedly this does give each site a nice sense of isolation, but it also means you have to walk a long way to see anything.

I may be a total philistine, but I have to confess, even though the museum was free, and parts of it were interesting, I’m not sure I’d go back. (Which you could interpret as: if you’re in the area, don’t bother trekking out there unless you’re super-keen and there’s nothing else to do.) 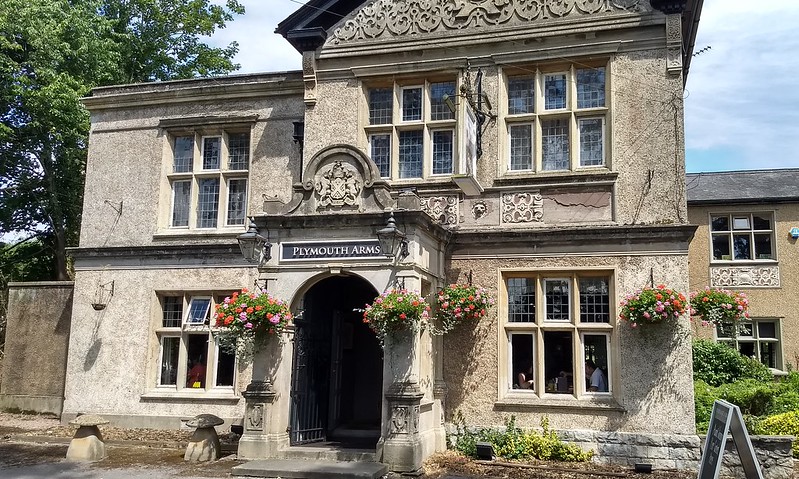 On the recommendation of some neighbourly builders, lunch was at the Plymouth Arms, a rather lovely pub just outside the eastern gate of the museum. Tasty. Mushy peas is a UK tradition I think we should adopt in pub meals here.

I thought we’d catch a bus back to the city centre. The buses from St Fagans back to central Cardiff are theoretically every 20-30 minutes, but I discovered that during school terms, there’s no bus between about 2pm and 4:30. Evidently the buses go off and do school runs.

This is perhaps understandable from a purely economic point of view. But it’s poor service to museum patrons.

Another bus runs from nearby, but only about every 2 hours. It was due in an hour.

I tried to call an Uber. A driver accepted (12 minutes away) then cancelled on me. I tried for a few minutes, but no others responded. Hmmmm. Could it be that, 7km from Cardiff City Centre, we were just too remote for Uber?

I had no idea what the local phone number was for a cab… nor whether they’d take a credit card. This of course is the benefit of Uber in an unfamiliar city.

So we decided to look around the museum gardens and mansion house a bit more (it’s all very Downton Abbey), then catch the bus.

The bus – assuming I’d read the timetable correctly – rocked up 5 minutes early – thankfully we’d reached the stop early. The bus driver seemed surprised to be getting any passengers :-/ Oh well, at least the fare was an even £2 each. 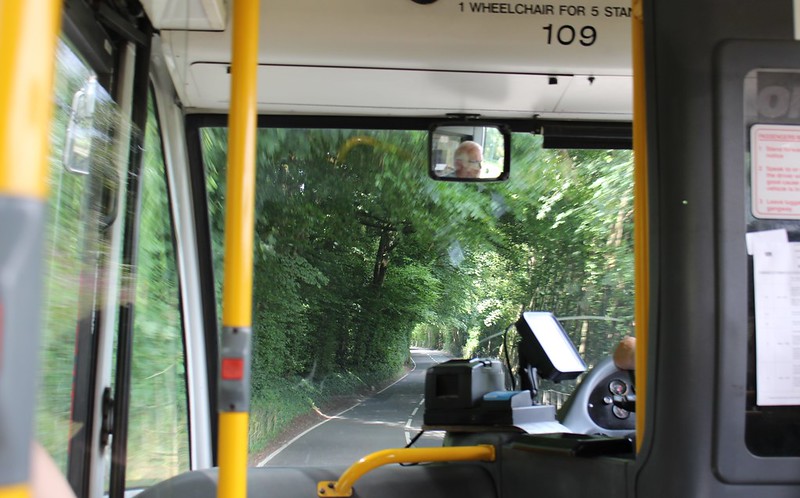 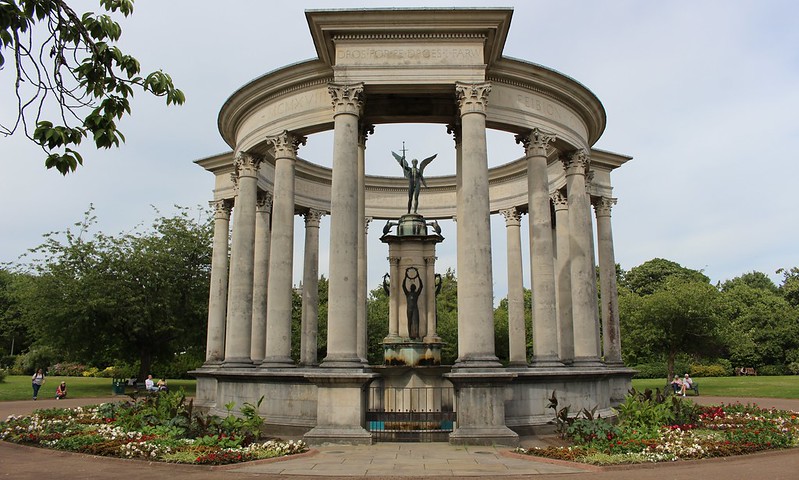 It took us into central Cardiff pretty quickly and we had another look around the shops to find a cold drink.

Then we walked up to the National Museum. Somehow the day had got away from us, and we only had about half-an-hour before closing time – only had time for a quick look around.

Doctor Who fans might recognise the museum as one of those used for The Pandorica Opens/The Big Bang, the final episode of Matt Smith’s first season. 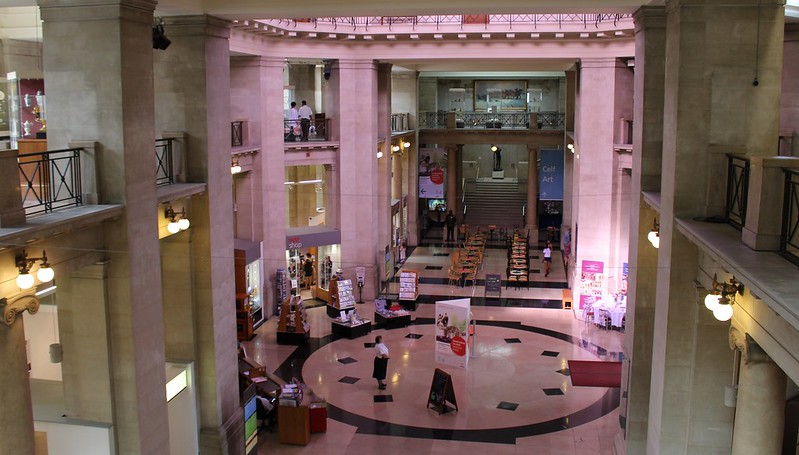 In fact, there are Doctor Who and Torchwood shooting sites all over Cardiff and the surrounding area. Turns out there’s a web site tracking them all: Doctor Who Locations.

As we continued to wander the streets, we spotted another location: the University of Cardiff, which doubled for Bristol University in the most recent Doctor Who season.

Walking past the Cardiff Police headquarters we noticed a film crew packing up their equipment, including uncovering the “Cardiff Police” sign, which had been disguised as “Bristol Police”.

I’m not sure what had been filmed, but a number of productions are based in Cardiff apart from Doctor Who, such as Sherlock and hospital drama Casualty. 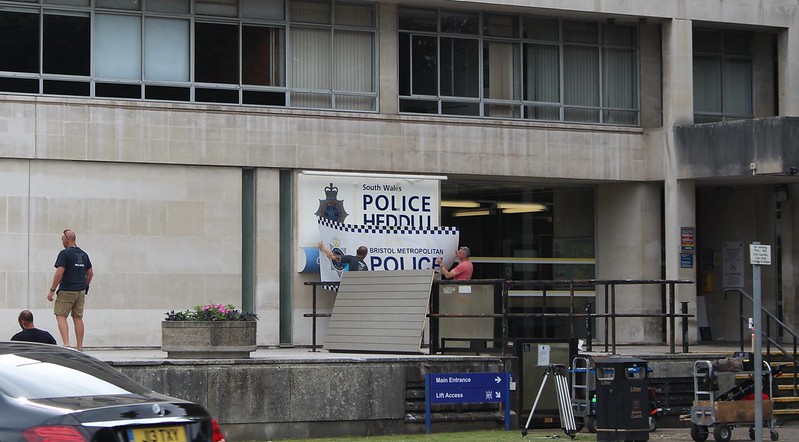 A little more exploring of the city centre, and grabbing a takeaway dinner along the way, we headed back to our accommodation to relax for the evening and prepare to head for our next destination.

2 replies on “Battling the buses”

My mind boggles at the state of the bus and fare systems there. The regional trains in England are bad enough but this sounds a whole lot worse. The outlook from the bus looks pleasant.

@Andrew, yeah the local bus disintegration is far worse than the trains. At least you can always buy a single ticket for a train trip, no matter how many operators are involved (though the fare will be made up of each operator’s portion, so it can be very pricey). More about train fares in a separate post!