(I am prone to do long overly-detailed blog posts about my holidays, perhaps more for my benefit and enjoyment than yours. Here’s the first instalment. This post is backdated. Published 26/7/2017)

This holiday was a long time coming. Co-ordinating with my sons (including university holidays) and work and M and relatives, let alone getting the money together, took some time… in fact it would be my first time in Europe since 1999.

But the day had finally arrived. After a flurry of packing, and wondering what would be forgotten*, we left the house about 11am, train to the City.

On the way through, I noticed some of the scaffolding had come off at Flinders Street Station, and showing the new, less mustardy yellow colour. I snapped a photo of it to post to Twitter.

A few days later the Premier’s Department rang asking if they could use the picture. Heh, you’d think own their media unit could get one, but oh well — maybe I happened to snap it just as it was in transition and nobody else did. They added some captions and posted it to Facebook:

I do like the new colour. Apparently the section on the right is also zinc sheeting rather than the brick, which explains the different look.

Anyway, we hopped off the train at Southern Cross, then Skybus to Melbourne Airport. It’s expensive (currently $35 return, times three of us), but as long as you avoid peak times, it’s usually quick and convenient.

The Skybus driver said the trip would be about 30 minutes, depending on traffic. I timed it: it was actually 23, though I still felt a bit jipped because we didn’t get a double-decker bus.

While on the Skybus I noticed one bloke up the front was constantly looking through his bags, murmuring to his travel companion and looking ever more concerned. Hopefully he hadn’t forgotten anything important.

M met us at the airport, and there was plenty of time for a silly selfie in the departures area — but first we had to get our luggage and boarding passes sorted out. 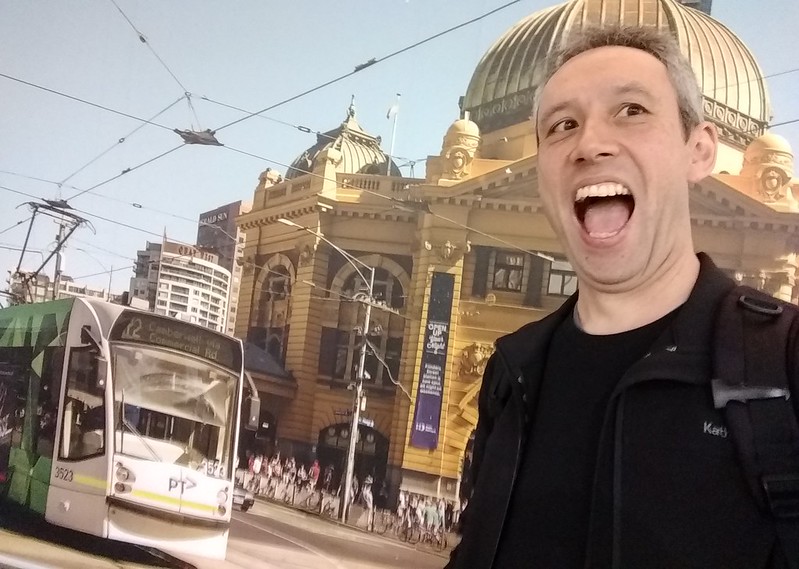 I’d booked with Singapore Airlines, based on the loose criteria of: wanting one of the better airlines, availability on the dates we needed, and not some weird route taking 40+ hours to get to Europe. They also have WiFi in their planes, though this is a paid extra.

It wasn’t particularly cheap – nothing is in July, thanks to Australian school holidays and European summer. But with other contenders such as Qantas/Emirates and Etihad all being a similar price, Singapore won out thanks to having slightly less cramped seats – apparently an extra inch of space.

I’d checked-in online the day before. The flight was pretty full, so there weren’t any practical choices of seats.

But I this I find a bit puzzling: The queue for those needing to check-in was really long. The queue for “Internet check-in” was really short. So we got to bypass the queue like rockstars despite booking Economy.

Once at the desk, they weigh your bags, ask you questions about what’s in them, tag them, and give you boarding passes. So what’s the difference between this and checking-in at the airport? Just the lack of seat selection, which wasn’t an option anyway? Oh well, it certainly saved us a bunch of queuing.

After grabbing a sandwich and a drink (at the predictably incredibly exorbitant airport prices – maybe next time we should just make a sandwich at home), we headed through the departures gate (quick selfie against the tram-themed backdrop – see above) and through security.

Unbelievably, at the automatic gates at passport control, the bloke in front of us had left his passport in the scanner. Perhaps he expected it to zip through the machine and come out the other side like an old school mag stripe ticket gate. We called out and passed it to him. That’s not a mistake you’d want to make without realising until later.

Then the looooong walk to gate 14 via the duty free shops. 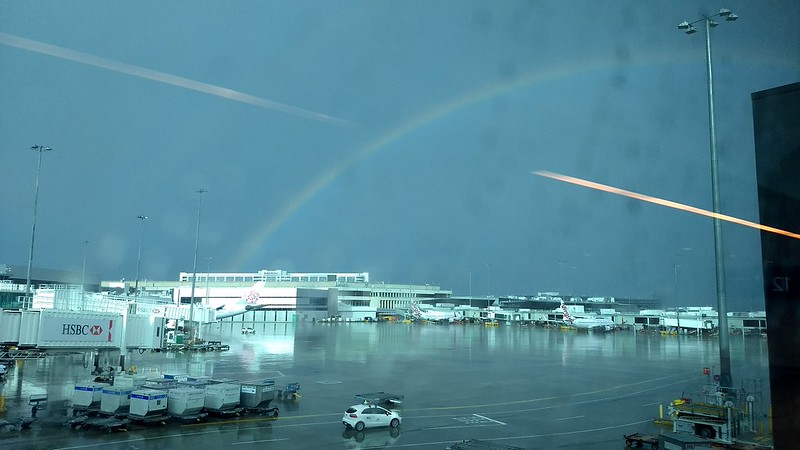 Despite some rain outside, the flight was away on-time (3:40pm).

The food on the flight was pretty good – with actual metal cutlery! I read for a bit, watched some classic West Wing.

Note to self: always grab the airline earphones. They’re hopeless, but your own snazzy earphones, which actually cut out some of the flight noise, won’t work – you get mono sound unless you have an adapter. Honestly, would it kill them to wire the plane sockets up so they provide stereo sound for stereo earphones?

Before we knew it we were landing at Changi. Two hours to kill in the huge transit lounge, browsing the shops. You can also watch a free movie or visit the in-terminal butterfly house. Notably, one shop was running a promotion to win a trip to Melbourne. 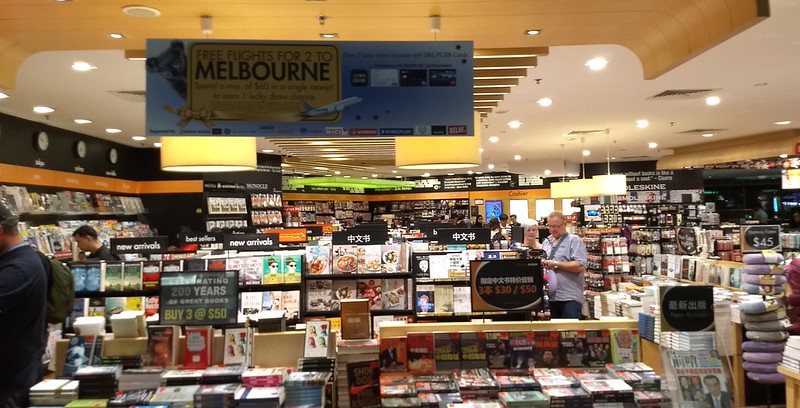 I tried to sign on to the free airport WiFi. It wanted to send an SMS activation code to my phone, which would normally not be a problem, but this was when I discovered that my phone roaming wasn’t working.

This would be a problem for another three days, as I tried repeatedly to contact Telstra to get it resolved. Their Twitter people are very helpful but unable to actively fix very much directly. Their online chat people try to be very helpful, but anything complex tends to outfox them.

In this case (I think on the second contact attempt, a day or two later) one of their so-called solutions was a suggestion for me to ring up another department. DUDE, I CAN’T RING ANYBODY BECAUSE MY ROAMING ISN’T WORKING. And even if I could, it’d be costing me $2 a minute to make that call.

Having a fully-functioning phone was important to me. Although I was planning to buy a second SIM (my phone can take two), some of the services I use, such as banking, use SMS for two-factor authentication. I also wanted to receive text messages and calls from home.

The hassles I had with getting it fixed is probably the sort of issue that convinced the Australian Government MyGov web site to suggest turning off 2FA when going overseas.

After a number of sessions on their online chat system over several days (well into the holiday proper), it was finally resolved, though frustratingly I don’t even know why it didn’t work in the first place, since roaming is meant to be on by default.

And there was a sting in the tail of this problem. Stay tuned.

So anyway, a little while later we boarded a huge bulbous Airbus A380 to continue on, departing Singapore at 11:30pm local time. I don’t quite know how these ridiculously big planes manage to get off the ground, but they do.

After the “supper” meal, I slept for a bit, though light from toilets kept made it difficult to get back to sleep once awoken.

We flew on into the night, headed for London.

*What got forgotten? My sun hat. Would I need it to prevent getting sunburnt? Yes, as it turns out.

Hi Daniel, hope you all have a fab trip. I actually started following you originally after your 1999 trip with your young kids as we did a similar tip to the uk in 2000 also with young kids. Googling. “traveling with small children, ” was how I came across your blog.

I just got back from an overseas trip and took no less than 3 adapters for my headphones because the onboard headphones are so bad, I wouldn’t want to be stuck not using my nice gear. The adapters are relatively cheap, or sometimes you can snag them for free from those same onboard headphones (QANTAS have just started doing this)

I’m already enjoying your ‘overly’ detailed holiday posts. Singapore Airlines is very good. Emirates gives you a period of wifi time per sector, maybe 2 hours. But you have to actively log out if you want to save some time for later. The earpiece sound on very new Airbus planes is quite good. Awful on old Airbuses. That there are old Airbuses is amazing itself. It seems like yesterday that they made an appearance. I am not sure about Britain, but free wifi is everywhere in Europe.

Hey Daniel, I just got back from a France/Italy 2.5 week trip about a month ago and the newer Airbus planes we got seem to have dual stereo sockets on their entertainment units. The Boeing planes on the trip had older units and some didn’t even have USB ports to charge devies etc.
As for the phone roaming issue, I had 3 Aussie SIMs on hand (Woolworths Mobile-Optus, Amaysim-Optus, and Telstra). Only the Woolworths Mobile optus SIM was roaming properly. Anyway, I tried to get by with wifi only and pretty much was ok until I needed to SMS the manager of an apartment we booked in France. The simple solution to this problem is wifi calling which allows using internet as your GSM network extension ala SIP phone style. American mobile carriers already provide this for a few years now and even iOS has catered for this for nearlt 2 years and Android for even longer. Why are the aussie Telcos dragging their feet on this option??!!!?

@Aun, it looks like Telstra already supports WiFi calling… but not when roaming!

“What about International Roaming?

There are currently no Wi-Fi Calling roaming agreements. Your device will automatically fall back to 3G circuit-switched to make calls when overseas and standard international roaming rates apply. If you try to connect to a hotspot while overseas you’ll receive the error message ‘Fail to connect to VoWiFi’.”

I think the dual-mono-sockets thing on planes is a legacy of the days when they first introduced electronic headphones in place of the air tubes they used to have. In those days, not many people had headphones and someone would have decided that people would steal the airline headphones if they could use them anywhere else. Solution? Fit them with a plug that won’t connect to normal equipment! It’s similar to the hotel coat hanger absurdity, which continues to this day.

4 hour stopover at Changi Singapore on Saturday.
You can walk up to one of the PC Internet stations and get the code that way (after scanning your passport) just use that as the password on the wifi login screen on your phone.

Also once you are online – installing the iChangi app extends your 3 hour session to up to 24 hours (Handy as I had a four hour stay.)

@Warwick, on the way over (July 3rd), you’d had to go to the Information Desk and show your passport and get the code. By the time we were heading home (July 23rd) they’d automated it as you say.