Intersections on curves can be tricky. Even slight curves.

Every time I pass the Astor on Dandenong Road in a car, particularly eastbound, I watch what happens.

It’s not uncommon for vehicles to veer into the next lane over as they cross Chapel Street. Usually, thankfully there’s nobody in the way.

This morning it happened to me. 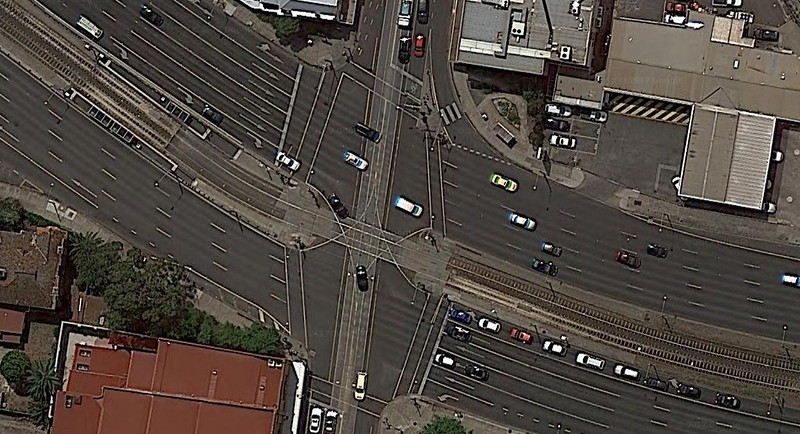 I was driving outbound, this morning at 10am. I was stopped at the lights, in the lane third from the right (including the turn lane), which becomes the second from the right on the other side of the intersection.

The lights turned green and the cars at the front, including mine, started off. Before I know it, a grey Mercedes to my right is coming into my lane.

Contact. Mild contact. Somewhere near the right front corner of my car. I can only feel the slightest of impacts. I can’t hear crunching, but just a quiet bump. A mere nudge.

I swore (mildly), beeped, and somehow managed not to instinctively veer into the next lane across from mine. Back years ago when I learnt to drive, my instructor told me: don’t avoid one crash by causing another.

Thankfully the other car veered back into its lane.

It kept going. They didn’t seem interested in stopping. I made a note of the licence plate number, and when I could, I pulled over for a look. 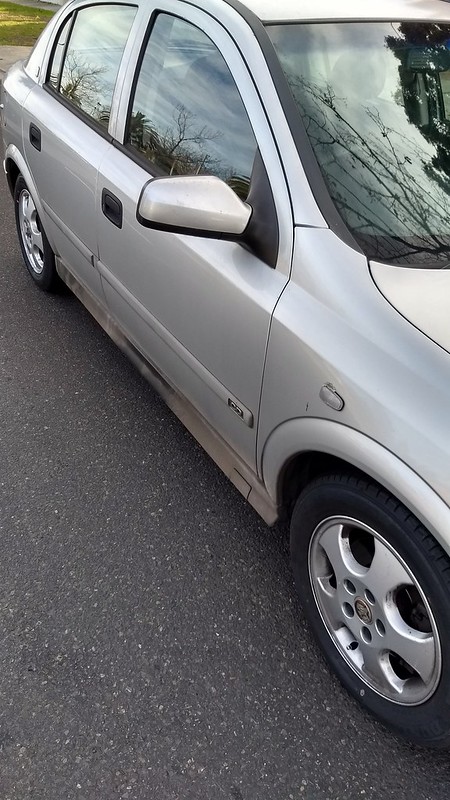 No visible damage. I prodded and poked the point of impact a bit. It seems okay.

(Due to the warning of impending expensive repairs from the mechanic, I’m hoping to replace this car when my finances have recovered from the holiday and the investment, which by accident have fallen in the same year.)

Obviously, be careful to stay in your lane when you’re driving. If you’re at the front of the queue, perhaps do a visual check before you start to cross.

In the absence of line markings, some intersections have a grid of studs in the road surface that show where the lanes go.

I’m not sure why they’re not installed at this spot; given the number of mishaps, I’ve seen, it’d be a welcome upgrade.

I agree that it’s easy for vehicles to drift into the wrong lane as they cross Chapel St. Drivers need to concentrate because, as you say, there are no studs and even the white lines on the other side don’t seem to be as clear as they could be. What’s more, technically this is a 70 kmph zone – at least until the 40 kmph school zone just down the road.
Hopefully the Merc got more of a “souvenir” than you!

Typical Merc driver.
A bit scary, but glad there was no “accident” and no visible damage.

If you think its bad when you’re in a car and another driver simply veers into your lane, try riding a bicycle or motorbike around Melbourne. Not only do they drift into your lane on anything other than a dead straight road — and frequently on them as well — but if they do see you, the assumption is that you’ll get out of the way so they just keep on coming.

Welcome to my world and my daily twice work day commute. About two years ago Vic Roads repainted the then very faded lane marking and I think only since then it has it happened to me only a few times, the last being only a few weeks ago. The mysterious part is that in spite of giving them a good horning as they almost run into the side of my car, they seem oblivious to what they have done. People can guess what I mean by me saying I won’t go down the path to racial and age stereotyping of drivers, but it is true. I’ve experienced it for nearly 16 years countless times. It is never your over the speed limit young tradie. It is never the young lass who rearranges her voluminous hair constantly as she drives. It is never the business person commuter. It is not even the blonde yummy mummies in SUVs who window shop from their cars in High Street, Armadale. My partner once experienced when he was driving with me as a passenger and he went ballistic when it happened to him.

VicRoads is a curious beast. When it addresses a problem, it can solve a problem really well. But getting the behemoth to act is, I suppose, is to do with its funding.

Don’t worry. When you trade in your car, the appraiser at the dealer will find the damage and knock down the value of your car even more.

Btw, like yourself, Sister was a passionate manual gear change car driver. She has seen the error of her ways and embraced 1940s technology and now bought an automatic.

When I used to drive to work (outbound in the morning peak), that happened often as well. I’m sure it happens at least once a month at that exact same spot! For some reason a car from the right most lane would go into the second lane from the right near that Shell station.

I have had to use my horn a number of times, but it seems the offending driver seems oblivious after the fact as well. Perhaps they have mistaken the turning right lane into Chapel Street continuing into the right most lane after that intersection.

The next other place I can think of that this happens often is Montague Street inbound right after that intersection with Lorimer Street. The left most lane somehow would have cars getting stuck into the shoulder.

Also, is this incident considered a “hit and run” even if they are not aware of it happening?

@Arfman
You’d think it would be a hit and run until you look at the actual road rules:
https://meltdblog.wordpress.com/2016/11/09/police-prejudice/
Without physical damage or people injured the police don’t want to pursue it, no matter how dangerous the driving.

Gee that intersection looks like it needs to be fixed. I’d even push for grade separation of the trams to take them out of the equation.

Perhaps without any clear evidence, it becomes a case of “he said, she said”. There is a possibility of someone making up major accusations from a minor road incident.

Not certain of the laws in Victoria regarding recording equipment, but dashcam, dashcam, dashcam! They’re cheap, easy to install, set it & forget it, and help to clarify what happened when a vehicle incidence occurs.

I hope your vehicle is still holding together! I think legally (I’m not a lawyer, i just have internet access! ) there are no lanes in signalised intersections, other than perhaps for turning lanes (the curved lines through the intersection). So it is probably wise to keep a distance from other vehicles as you go through.
I tweeted a similar issue in April. Somerton Rd and Hume Hwy, Somerton, is a risk to cyclists, like Adrian mentioned above.
(https://twitter.com/BalaamKevin/status/852364807525224448)