As you grow older, you find yourself doing things you genuinely had no idea you’d be doing. At least I do. Perhaps other people have all their plans worked out way further in advance.

When I was growing up, we had little money, and I couldn’t dream of owning my own home.

At age 30 I found myself living alone for the first time, it still wasn’t on the radar. It took me until 35 to get to the point where I could buy.

Through my 30s and into my 40s, things have really come together moneywise. Good steady job + low interest rates + house appreciated markedly (I couldn’t afford to buy in Bentleigh now).

Last year I wrote about money, and that I was pondering buying an investment property. This came about via refinancing my home loan at the suggestion of my sister, and chatting to a mortgage broker about it.

My house was revalued by the bank. It’s worth just on double what I paid for it. Based on that, the mortgage broker said I’d have no trouble borrowing enough for an investment. Rent could be expected to be roughly in the zone of the interest payments.

Virtually any other type of investment would have to be self-funded. I’ve dabbled in shares (disastrously), and the bank wouldn’t lend to me to buy a race horse or gold!

10+ year objective: boost my retirement fund, and help my kids buy when the time comes.

So I decided to try an investment property. But where to buy?

Let’s assume I want something in the same city where I live, rather than some far-flung location.

First of all, I’m aiming at something within walking distance to a railway station, shops, parks, other amenity. Similar factors to where I would want to live — it seems to be a good formula.

If one assumes the jump in prices has started in the inner-suburbs and is steadily working its way outwards (with gentrification etc), then the strategy is to buy just ahead of that wave. To go with a stereotype, as the CBD gets busier and the commuter population gets larger, then you aim to catch the next lot of CBD white-collar workers moving in.

In the Frankston line corridor, this wave of house price rises has obviously already gone through Bentleigh (where I live), Moorabbin, Highett, Cheltenham, but then you get to the beachside suburbs like Mentone which have been expensive for some time. I’ve missed that wave.

One could look in other directions, such as west, but what about along the Dandenong line? Oakleigh, Clayton, Springvale have already gone up or are doing so now.

For bonus points, look for government infrastructure upgrades in the area to provide a boost, a rejuvenation of some kind. For instance, level crossing removals.

So I ended up targeting Noble Park, which has the following going for it:

Down sides? Well despite being close to Monash Uni, the public transport links to there aren’t very good. In fact all the local buses are fairly appalling.

The area has a reputation for crime, though perhaps undeserved. Parts of the suburb seem a little run down, though not really worse than anywhere else.

Remember, it’s about investment potential. I’m betting that the whole area will get nicer over the next (say) ten years. 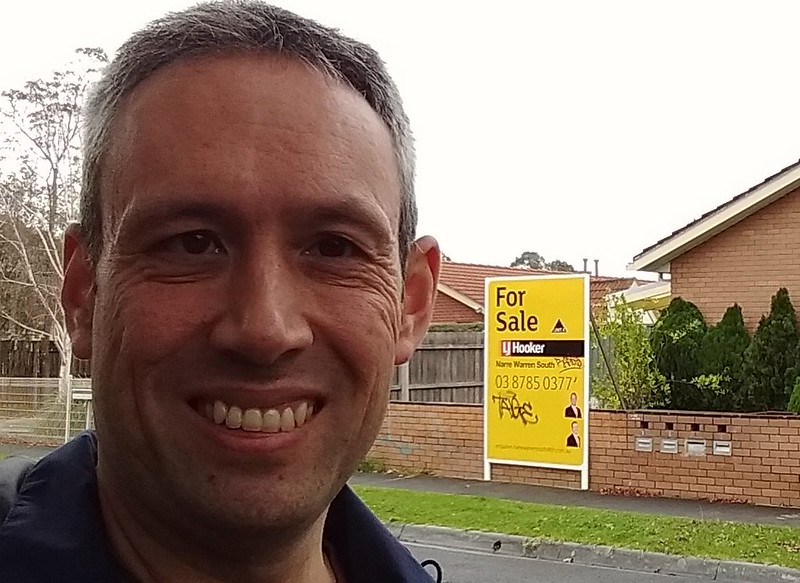 Unknown: Will the impact of skyrail be positive, or negative? I’m betting positive. If the open space isn’t totally dominated by car parks, and if they keep it clean, it’ll add to the neighbourhood rather than detract from it.

In contrast to areas like Carnegie, where it’s seen as controversial, it seems pretty accepted in Noble Park, in fact I even saw one real estate ad crowing about it.

I started hunting for a property late last year. Scoured the web sites, and drove down regularly on Saturdays with M, whose patience never seemed to wear thin.

I went to a few auctions, even placed some bids. Gradually it became apparent that some types of property were probably beyond my financial means, if I wanted something in the area most desirable.

Finally in May I found something up for private sale, put in an offer, haggled a bit, and it was accepted.

A unit, with two bedrooms, at the back of a block of four. Brick, with a bit of a back garden, and very close to the station. So that skyrail had better work out!

A great deal of paperwork has followed, including applying again for the loan, even though it was “pre-approved”. But it’s done. I’m buying it.

It’ll be rented out to tenants. (I’m hoping to be a good landlord, not a git landlord as some were back in the days when my family rented.)

This is going to be interesting. Will the rental return be as healthy as forecast? Will it keep abreast of any interest rate rises? Will the area appreciate like I hope?

We’ll see what happens next!

7 replies on “I bought an investment property”

Daniel
good on you. Hope the tenants are decent folk (and the neighbouring tenants).
I assume you can negatively gear so your rental returns aren’t that important.
Good luck!

Congratulations on the property Daniel! I always felt better with shares myself, but not individual stocks. I ended up with most of my investments in index funds, i.e the whole stock market. I’d be nervous about the real estate bubble in Australia which has been about to pop any day now for five years. So maybe it won’t :)

I have a friend who owns multiple properties and being a landlord really reduced his faith in humanity. His tenants were always trying to squeeze him for everything they could get with sob stories aplenty. I hope that doesn’t happen to you, but be ready for the possibility.

Our investment flat did very well in capital growth but it never made a profit and we had to constantly contribute, in early days because the interest well exceeded the rental and later, maintenance. If you think you may sell it in the future, it might be a good idea to look up capital gains tax being reduced by living in a property for one year.

Keep a close eye on the property manager too.

I want to be a good landlord but the lack of communication coming from the property manager and trying to get any thing done is super frustrating.

Good Luck with being a landlord! We bought an investment town house in Noble Park in the early ’90s, but at the Sandown Park end. We held it for seven years. It was hard to find good tenants. The agent gave one his bond back. Then we discovered the hole he had punched in the front door – the hole was covered by a poster and the agent hadn’t noticed. After about 7 years we sold it and made less than 10% capital gain. We barely broke even. The rent didn’t cover the interest, so there was some negative gearing. If we had kept it for another 18 years (till now), the capital gain would have been more like 300%. But better capital gains are in the inner-suburbs. Our home is East Bentleigh is worth about 10 times what we paid for it 30 years ago, and if we could have afforded to buy in closer to town, we probably would have gained even more.
Shares are much more flexible and lend themselves to many styles of investing from trading to hold and accumulate. If you still have your XRO shares, they are within 5% of your buy-in price, and may yet show a profit. Now may not be the best time to invest in Bank Shares, but they still pay great dividends (Bendigo Bank is trading on a 6% yield, which is more like 8% when you consider imputation credits). Anyhow, I hope your real-estate experiment is a success.

Noble Park might be a bit of a late bloomer in the market. I’m not sure what it’s like these days, but a decade or so ago bizarrely it was cheaper to buy a house in the areas roughly between Clayton and Dandenong than it was in significantly further out suburbs like Narre Warren and Berwick, which people saw as being more “family friendly”.

L2 – this pattern is not unusual and still exists in other corridors. For example compare closer in Frankston North with further out Mt Eliza or Mornington. Deer Park vs Caroline Springs. Or Laverton vs Pt Cook. Braybrook, Jordanville and Heidelberg West are others. I would put it down to a combination of 1. The allure of a new house (with two bathrooms!), 2. Being near demographically similar people (most people prefer similarity over diversity, hipsters are an exception but their moving into an area reduces socio-economic diversity long term), 3. The reputation of schools, 4. Concerns about public safety, 5. Potentially new facilities (bear in mind things eg schools and bus services were being ripped out of established areas to be spread more thinly over a larger suburban area), 6. The new house effect where outer areas are dearer because construction + land costs exceed established homes in tired unloved areas a few suburbs in and 7. First homebuyer and tax benefits for building new (eg extra FHO grants, eligibility for overseas investors, generous building depreciation) as opposed to buying established.

When it was developing Roxburgh Park was considered way ahead of Dallas or even Coolaroo. But now Roxburgh Park has degentrified greatly. Buying in Dallas would have been a safer bet despite being near the bottom of income, school, or SIEFA tables. Similarly Noble Park has come off its nadir of a while back when there were riots and I suspect is less likely to go backwards than newer outer places.