The state government announced over the weekend that Edithvale and Bonbeach grade separations on the Frankston line would get rail under road — a little surprising given apparently challenging engineering so close to the beach.

No doubt this is politically expedient. For better or worse, that’s how democracy works sometimes, but you have to wonder how much extra disruption and cost will be incurred along the way if they have to do all that digging — though there’s no mention of property acquisition as at Cheltenham, probably thanks to the well-defined separate rail corridor on this part of the line.

One thing that strikes you about the designs is the lack of green. Perhaps this is because they’re only concept designs (they don’t properly show station buildings, for instance), but it may indicate that even if there are later plantings to beautify the area, all the current trees will be removed first.

(Some anti-skyrail protesters have aligned themselves to the worthy cause of preserving trees, but we know that in general, digging a big trench is more likely to result in tree removal, thanks to the interruptions to root systems and the desire of authorities to avoid the risk of trees falling on rail infrastructure.)

Bonbeach now vs the plan: 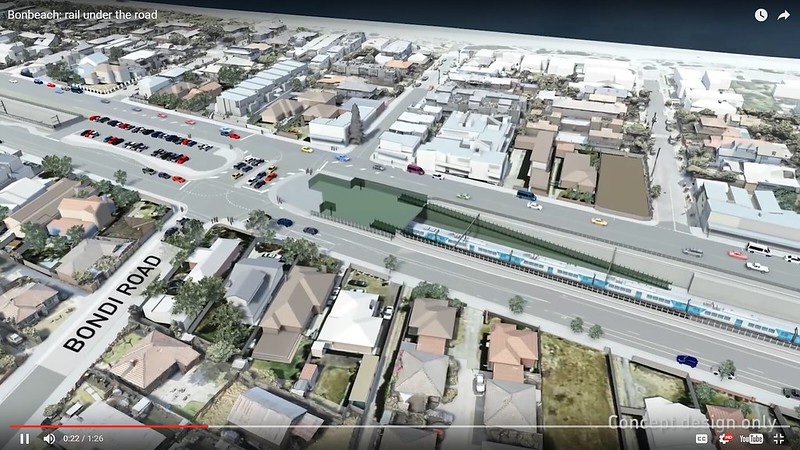 Edithvale now vs the plan: 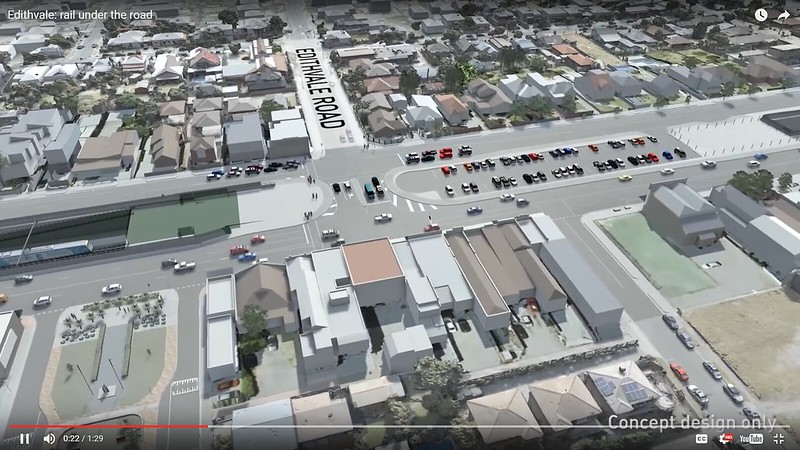 Ironically the northern end of the trench at Edithvale begins right next to the Lochiel Avenue crossing. If it’s a minor road, you’d think they’d take the opportunity to close it — even with a detour, the lack of level crossing congestion would make many car trips just as fast (and certainly less prone to unpredictable delays). Perhaps that decision is yet to be made.

At Seaford Road (about 700 metres south of Seaford station), it’ll be a lower “hybrid” version of rail over road: the road will be dropped by 1.5 metres, with rail going over the top of it at a height of about 5 metres. Basically they can’t do rail under there without destroying the local wetlands.

At Skye Road, it’s rail over for similar reasons, probably made politically easier by being adjacent to an industrial area and the existing motorway overpass (which has far more impact than current skyrail designs).

Seaford Road construction starts next year, Skye Road later this year, but the Edithvale and Bonbeach will be some time off, as they will go to the Minister for Planning to determine of an Environmental Effects Statement is required.

Hopefully there is some co-ordination between all these projects. Seaford and Skye Road are in the same section of the line. Bonbeach and Edithvale are on the other side of Carrum (where trains can be terminated).

Of course there are also crossings either side of Carrum station to be done; designs haven’t been released for these, but to minimise rail disruptions, it’s critical that all these projects be timed well.

As for these ones just announced — there’s little detail as yet concerning bus interchanges, station entrances — all the things that will make or break the new stations for public transport users.

Based on the material released so far, they’re not pretty, but this may change as the plans evolve. It’d be interesting to know what the locals think.

I’ve long been advocating rail-over for Bonbeach and I’m pretty disappointed with the outcome we’ve had.

If you’ve ever been to Bonbeach, you’ll notice that it’s not a very lively area – the “Shopping Village” on Nepean Highway has mostly been redeveloped for apartments, and what few shops remain have been struggling to get business. The Bonbeach Cafe, who did an excellent breakfast and coffee, have recently closed down. We’ve got a daycare, a bottleshop, and a pizzeria.

This is, in my view, largely because of the quite wide corridor between the bulk of the residents and the shop fronts that makes it more convenient to simply go to Chelsea where there are already more shops and a more pedestrian-friendly layout.

Putting the rail under the road means that the shop front will continue to remain inconveniently positioned for pedestrians, who drive local business, and equally inaccessible for motorists who have to contend with station parking to get a spot. Foot traffic will have to cross a pedestrian ramp which, as far as has been stated, will not extend over the Highway, meaning a net loss in terms of the time it takes to cross the corridor. That is, if a pedestrian ramp is conveniently located for you.

In terms of parking for the station, another issue, there will be no significant net gain in parking spots as there was with the rail-over design. And without a local bus route servicing the station, and a growing population, the local residents who are situated further from the station will face more and more difficulty over time.

Finally, like you said, there is a severe lack of greenery, and I don’t see how it can be fixed when probably the entire width of the rail corridor will be absorbed by the trench, with the only cut and cover sections going to parking and the station building.

My hope ultimately was for an elevated station with a ramp allowing people access from the far sides of Nepean Highway and Station Street, as well as from the opposite side of Bondi Road. Regrettably, most pedestrians will have to make one or two crossings at intersections which will, after the grade-separation, become significantly busier. Meanwhile, motorists will be left without a gain in parking spots, and there is no apparent provision for a local bus route (or an extension of the 902.)

I’ll put my faith in the NIMBYs who shouted down the elevated rail to at least get a few trees planted. But I worry for the walkability of the suburb and the health of the local economy. I also worry for the other nearby, far more congested intersection, at Argyle Avenue, which is not being considered for grade-separation.

They may as well stop the project. Leave the level crossings there and spend the money on the Dandenong line or somewhere else. If residents are too stupid to understand that elevated rail is the right solution in such a location, let them keep their existing conditions.

It’s a pity that hundreds of millions of our dollars are being wasted on an inferior solution, but if this keeps the current Labor Government in power and ensures that we get a slightly more sane transport system and urban environment (for less money than a roads-first Transurban world), then it’s money well spent.

(I used to live in Carrum, and moved near Gardiner station not long before the grade separation started there)

Darren summed it up pretty well. A railway running parallel between two busy roads will never be very beautiful, but an elevated railway at least had the potential to put some greenery underneath, and provide some lateral, useful connections for pedestrians across Station St./Nepean Hwy. There may be some token plantings here and there, but as anyone who has seen recent trench stations knows, there is a sea of concrete for many hundreds of metres.

I’m glad that Carrum station is next to impossible to put in a trench.

Don’t let the vocal minority cult of anti-skyrail let you be fooled into believing that’s what the majority of people want.

Nice summary Darren.
The major problems are the vocal minority and the mainstream media. And as Daniel put, that’s how democracy works. While traveling along the frankstone line I have seen no-skyrail posters everywhere. But people like us who think the optimum option should be chosen based on engineering/geotechnical investigation, environmental assessment and greater good never raised our voice unitedly. No matter what noble reasons the no-skyrailers show, at the end of the day it’s just their selfish thought about their property price. Sadly, their shouting and scare campaign also influence the other people in the community. And the state Govt is already nervous about the CD-9 project.

I am very surprised at the decision. Any information dropped in letterboxes of residents prior to the announcement seems to have made strong suggestions that going under would have environmental impacts. Referral to the Minister for Planning for determination of an Environmental Effects Statement? So, is it possible the decision could still be changed?

I cannot help thinking that this is pure political spin to keep the locals (some) happy… until after the next election. I believe it will be a very long time (years) before any work commences on these crossings (whether be under or over).

The two at Edithvale and Bonbeach still pend an environmental study. Who knows, that may be released early 2019, after the next state election, of which just may say, it will now become a skyrail.

I prefer another option. Buy up all of the land between the highway and the beach, widen the beach, and the highway, and close down the level crossings at that point. Have walkways which go over the existing rail, and both roads at each of the stations.

And, it would make sense to do the whole in one go. Morrabbin to Frankston??

Agree 100% with the above. The state govt has caved to some selfish NIMBY lobbying, astroturfed by the VicLibs and the Herald Sun.

Regards trees – for the most part they CAN’T replant anything there with the planned design. Due to groundwater, and the base being below sea level, the whole thing will have to be a solid concrete bathtub including up over the sides. The NIMBYs will just have to accept a wasteland of concrete.

Or maybe… it’s a ruse to wait until after the next state election, then change plans after the EES shows it can’t be done.

There doesn’t seem to currently be any rail below sea level anywhere in Melbourne, let alone close to the sea. Yet it is being proposed by the level crossing removal authority!

Chelsea resident here.
I’d expect the silent majority who live along the frankston line (not just Station St) would prefer the skyrail option.
The whole Mordialloc to Eel Race Rd length should be one continuous Skyrail.

Skyrail is a much better option in terms of:
– environmental impact on wetlands
– future sea level rises which may make a tunnel unusable in 100 years
– continual maintenance/pumping costs for a tunnel
– roller coaster type setup that would occur now Carrum is skyrail
– the Mordialloc college to Aspendale stretch of rail is already at skyrail type levels and residents are just used to it.
– its much more expensive and takes longer to construct a tunnel
– a skyrail allows the whole length from Mordialloc to Eel Race Rd to be a continuous multi-purpose area for the community allowing for greenery, a continuous bikepath, carparking, playgrounds, popup shops/cafes and market area, just to name a few opportunities. A trench just keeps the existing separation.
– services can’t be increased until the whole length is done, otherwise traffic in Mordialloc and Chelsea will be at a standstill.
It’s only the selfish minority of people who don’t want their limited views diminished that want a tunnel.
Hopefully the EES will prevent the tunnels.