Last year, rail under (trench) and rail over (skyrail) options were presented for Cheltenham and Mentone. On Monday the government announced both would be rail under.

As expected, the Park Road crossing in Cheltenham (just a stone’s throw from the Charman Road crossing) is being grade separated as well. Latrobe Street, a minor crossing south of Cheltenham, is staying for now, even though it may have made sense to close it to cars.

There are of course pros and cons to rail under.

Probably higher cost, but possibility of building over the rail line (“value capture”) later — as proposed but not yet implemented at Ormond.

More disruption during construction. Expect a lot of road closures, and of course extended rail closures between Moorabbin and Mordialloc when they dig it all out. Unfortunately this will affect the new Southland station just after it opens.

Certainly more compulsory acquisition around Cheltenham. 32 properties are set to be demolished — far more than would have been needed for rail over.

The third platform at Cheltenham can currently handle trains to/from the City only. This will be upgraded to also link to the Frankston-bound tracks, allowing more operational flexibility. It might result in some consistency in short Frankston “stopper” services in peak, which currently start/end at a variety of locations: Moorabbin, Cheltenham, Mordialloc, Carrum.

Three pedestrian overpasses around Mentone, but two of them (at the shallow ends of the trench) will have extremely long ramps.

There will also be a big loss of trees — the options assessments last year forecast significant removal of trees whether the rail line went under or over, but rail over provided more options for replanting afterwards.

There have been complaints about tree removal around Murrumbeena for skyrail, but it’s worth remembering that the trenches at Ormond and McKinnon in particular resulted in a huge number of trees removed. Palm trees at Bentleigh got moved then put back, but other types of trees were simply chopped down.

Bike cages and bus stops? Locations aren’t clear yet. Hopefully these will be moved as close as possible to the station entrance, and available as soon as stations reopen.

Some diagrams indicate at Mentone the bus stops may be left further away from the station than some of the parking, which is completely illogical. And Cheltenham could do with some consolidation of bus stops, though this is partly related to the problem of buses to Southland departing from various different stops — not so much of an issue once Southland station opens. At both locations they may get 4 storey car parks in the station precinct. It’s unclear if this is to preserve current numbers of car spaces, or radically increase them.

Multi-storey car parks are extraordinarily expensive. The one recently built at Syndal cost an eye-popping $43,200 per space. And while it takes up less ground space than a single level car park, it’s not beautiful, especially as they failed to activate the ground level for retail or other uses. It’s not as tall as a 4 storey building, but it’s still pretty tall, even compared to the elevated station. 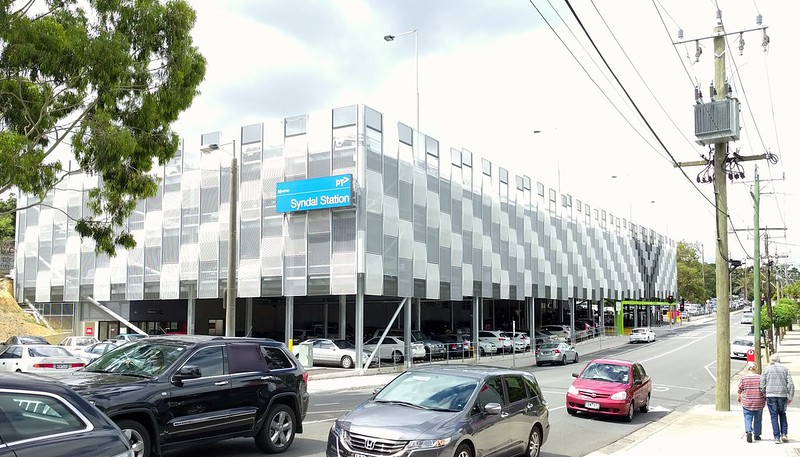 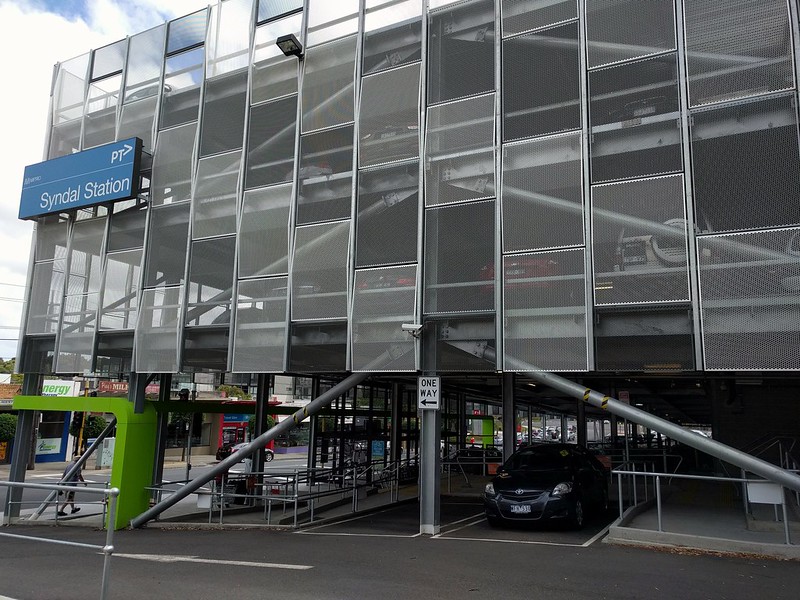 A big increase in station parking would be a mistake. It would increase local traffic, and undermine other more efficient modes such as walking, cycling and feeder buses.

At the very least, Cheltenham will have car parking above the trench, along either side of Park Road. This could have been a good development opportunity.

So the anti-Skyrail people got their way. I wonder how happy they are with the consequences for people whose properties will be acquired and demolished?

The Opposition of course… are opposed.

The Andrews Govt last year opposed rail under road as ‘trenches’ – today its announced as policy. How about a backflip on Werribee jail.

Right… but context is important.

One of the primary reasons for skyrail on the Dandenong line is to limit the disruption. Part of this was the gas pipeline underneath Carnegie, but also the passenger numbers.

Interestingly, Cheltenham and Mentone are both within the strong Liberal seat of Sandringham, though the boundary with marginal seats is very close by.

Proximity to the beach and other geological factors may see the crossings further south result in a different solution. We’ll see.

But hopefully — despite the big trenches to be dug at Cheltenham and Mentone — disruptions can be kept to a minimum.

12 replies on “Cheltenham and Mentone: rail going under road”

Why not Warrigal Rd as well? Seems like a lost opportunity.

I’m keeping my fingers crossed that we will get elevated rail down in Bonbeach. The suburb could really do with some rejuvenation, and lifting the Great Wall of Station Street/Frankston Line/Nepean Highway (at least partially) could help. Though I remain somewhat pessimistic since Carrum is extremely marginal and the anti-skyrail ground campaign has been getting pretty vicious lately.

My main concern is with, as you mentioned with these crossings, the pedestrian overpasses will be ludicrously long. As it stands, if the line down south goes under, then many of the existing crossings will be replaced with extended overpasses, leading to zero net gain for pedestrians. Not to mention that such overpasses will stop short of carrying people over the Highway as well.

Anyway, good article Daniel. I was just wondering if you could find more detail on the future bidirectional Platform 1 at Cheltenham. Will it allow geographically shorter line suspensions during disruptions? Why would allowing passage to the south help create consistency for short-shunting services coming from the north?

That means ex-Frankston trains will only be able to arrive in PL01 and continue to city, not PL02 to allow for overtaking moves or turning back towards Mordialloc if necessary. Easily fixed with say $3mil on a new crossover at the south end.

Regarding overtaking moves, does that mean express trains will be able to have a consistent stopping pattern, rather than the present situation where they run express from Cheltenham, Highett, and Morrabbin?

Kingston’s ‘Mentone Renaissance’ project has been running for several years now, very very slowly, aiming to rejuvenate the Mentone precinct. It may even have been slowed to enable proper inclusion of the design of the level crossing removal and new station (my speculation). The ‘Renaissance’ plans include moving north-bound bus stops further south than their current location, and adding a second pedestrian crossing. It will be important for LXRA designers to now work closely with Kingston Council on station precinct design, to get the bus stops, bus routes, pedestrian and cycle access, gardens, plaza, car parking and through-road design right. I have long-held fears that they haven’t been visionary enough with their ‘Renaissance’ plans, and they will miss the opportunity to turn the station precinct into a truly vibrant, activated, safe and accessible pedestrian experience, and we’ll end up with indirect paths, conflict points, circuitous bus routes and too much car parking.
http://www.kingston.vic.gov.au/files/e056d8b3-4d3a-4622-bd16-a3c400c7f3e5/The-Mentone-Renaissance-Booklet_web.pdf

One of the arguments against skyrail was the fear of graffiti covering every surface. I went through Ormond – Bentleigh last week, and on the platform 3 side at least, graffiti was everywhere. Meanwhile, elevated Patterson was untouched. With more trenches in the pipeline, what is the process for ensuring that graffiti is removed as quickly as possible?

Was any consideration given to aligning Mentone Pde with Swanston St?

Hopefully the bicycle cages don’t take a year to open after the carpark monoliths are completed.

I also can’t believe the trench is going so close to Warrigal Rd, yet the crossing will remain.

For a train passenger, the elevated railway is much better. At night, it can be rather pretty seeing the lights of the city like a motorist going over the West Gate Bridge.

Also, those columns will not be visible to train passengers, unlike the long trench walls of the other option.

Many complain about the noise. Yet, it needs to be asked, what noises would there be. Sure, diesel locomotives are a little bit louder than your typical harley, but that is the only noise you will get. There will be no horn noise, as why would it ever be blown. Ding Dings of the wig wags are another noise you will loose totally.

Would there be any new or inherent noises that we get from having elevated or trench railways? I say no.

@Drew, it appears Warrigal Rd is far enough away not to be affected (unlike Park Road). The info published says nothing will preclude doing it later. Remember, for better or worse, the LXRA is sticking strictly to Labor’s list from the 2014 election.

@Darren, I think you’ve got a good point. The Bentleigh/Mckinnon/Ormond rail under has been a huge engineering task, and has fundamentally changed the station precinct, but in a way hasn’t really rejuvenated the broader areas, at least not visibly so far. It’ll be interesting to compare with the Dandenong line projects.

@David, so that means a train coming out of stabling at Mordialloc can’t dwell at Cheltenham before starting a short service to the City, without blocking the up line?

@Nick, “graffiti covering every surface” is about right — I’d qualify it to every vertical surface — and trenches have a lot more of those than “skyrail”, assuming the line is supported by columns.

By the way, the retaining wall on the west side of Patterson station does seem to get re-painted promptly. I’ve been past there a lot on foot while walking, and it never seems to have any significant graffiti on it.

@Daniel, correct, though I suppose that train could wait on the centre track at Mordialloc or just start from there. Lack of the extra crossover basically means Cheltenham, Mentone and Parkdale will need bus replacements in addition to Southland and Highett, if the section Moorabbin-Cheltenham is interrupted. I wonder how that stacks up economically (cost of crossover vs cost of extended bus replacement multiplied by chance and timeframe of those replacements?)

@Darren, the main benefit of allowing overtaking moves would be to permit freight trains and diesel trains from beyond Frankston to overtake electric trains. There would be relatively little effect on current electric train services.

@Nick, wholly agree that extending Swanston St south over the railway would have been nice, but to do so would necessitate shifting one or both of the heritage-listed station buildings (doable, but expensive and difficult), and/or demolishing at least some of the shops between the railway and Como Parade West. If either of those was going to happen anyway then it’d make sense.

[…] have to do all that digging — though there’s no mention of property acquisition as at Cheltenham, probably thanks to the well-defined separate rail corridor on this part of the […]

Unfortunately, I have heard that at Cheltenham, there will not be a bus interchange provided, and this is shown on the roll plot. This level crossing removal is a perfect opportunity to provide this and it is a shame that one will not be provided. Along with a bus interchange, there is also a perfect opportunity to extend buses that currently don’t have Frankston line interchanges, such as the 631 and 821. I also think that, the car parking over the railway line is a massive waste of space and could be so much better used.

Latest plan for Cheltenham has Kingston taking over right up to the Chelt. Park boundary. This is so multiple new apartment blocks can be built next to and over the rail. All vehicle entry west side is eliminated. The existing 3 carparks 2 of which have multiple entries and “drive through” will be eliminated and Railway place becomes a two way “Shared Zone” entry/exit from Park Road. All vehicles to multi storey park, apartment blocks, drop offs, ubers, as well as bikes, scooters, pedestrians all in the one “Shared Zone” The shared user path will be on the West Cheltenham park side, however Bayside have no plans or committments for any interconnecting bike paths, drop off points or pathways through Cheltenham park