Early start. If all went to plan, I was going to be at Melbourne Airport to meet my offspring at 12:30, assuming they made their connection in Sydney at 11:15.

Being there at 12:30 meant flying out of Brisbane by 9am, as the flight is a little over two hours, and in summer there’s an hour’s time difference due to daylight saving.

As it happens, I woke pretty early again, had a cup of tea, packed up my stuff and checked-out (very quick), before heading to the station. It was peak hour, and commuters streamed out of the gates at Fortitude Valley – a contrast to the dodgy types hanging around outside the station the night before. 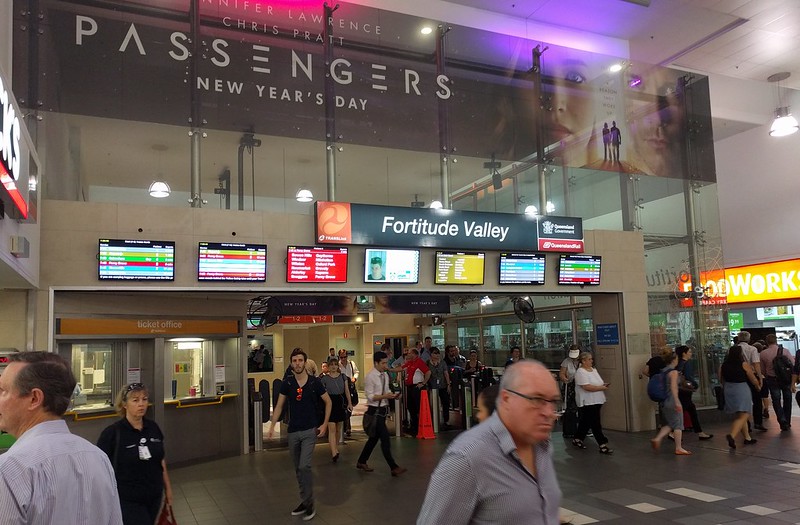 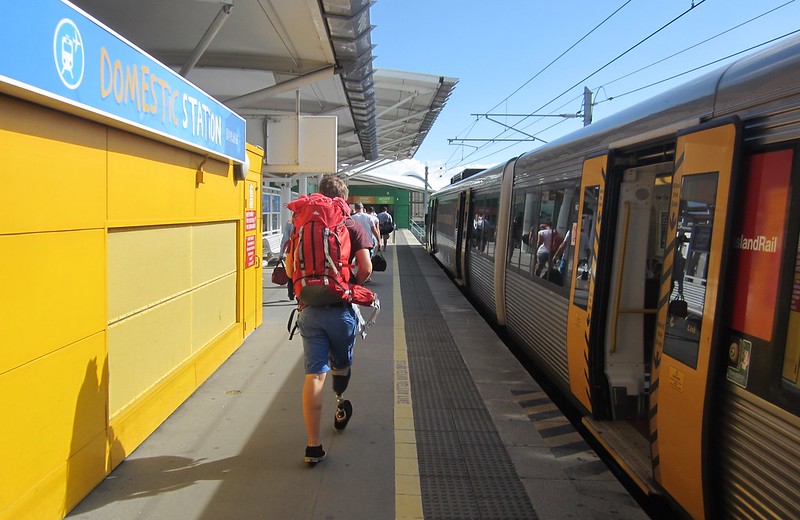 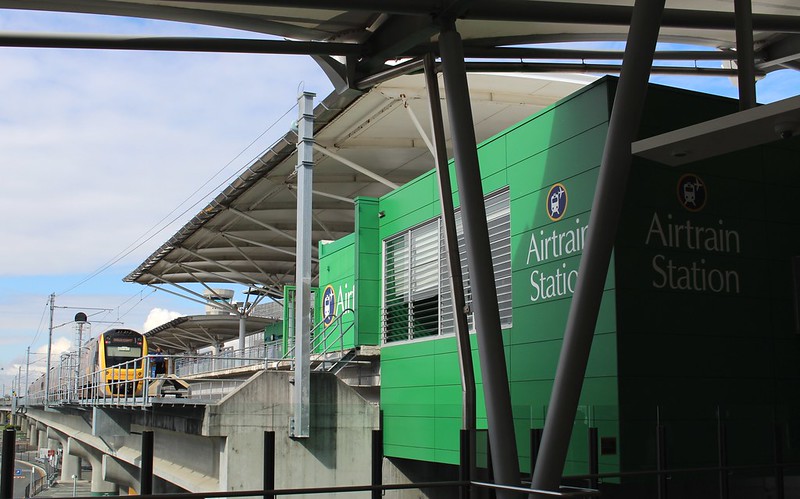 Despite the train having to wait for another coming back the other way (the perils of single track) I was at the airport on time. Track congestion might be an issue, but it’s a lot less worse than the traffic congestion suffered by Skybus.

I was about to skol my bottle of water when a passing security bloke said it would be allowed through security — they’re only banned from international flights.

In the rush I hadn’t eaten breakfast (well, apart from a meusli bar) having found the gate I bought a ham and cheese toastie and ate it while I waited.

I’m surprised at how many of you have been asking if this grand rendezvous plan actually came off, and whether I was able to meet my sons on their trip Las Vegas via Los Angeles and Sydney (the final leg also being on Qantas domestic).

As if this far-too-detailed trip blog (which frankly is more for my benefit than yours!) needs a plot point for some suspense?

They advertise the Sydney airport train in Brisbane and Melbourne. I didn’t notice any ads for the Melbourne Skybus…

Though I’d flown up on Virgin, but I was flying back on Qantas — part of the plan. And I didn’t check in any bags, but took my two small backpacks through security with me onto the plane. That way I could meet my sons in the terminal.

Unfortunately the plane was a bit late pushing back. But we made up time, and after a route that gave us a nice view out of the window of Melbourne’s CBD, we landed only a few minutes late. 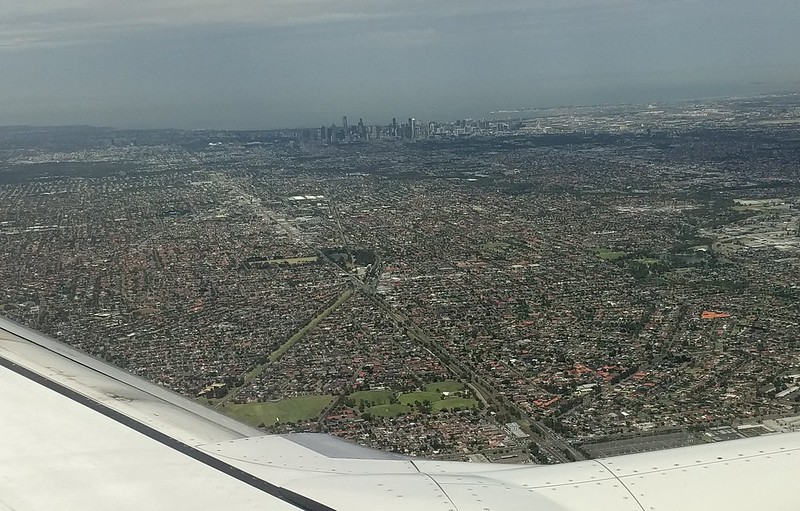 My flight had been scheduled to arrive twenty minutes before theirs, so I made my way to their gate and waited. The sign said they’d just landed, and before too long the plane arrived. But had they made their connection? Were they actually on it?

People started to come out of the gate in ones and twos. Then there’d be a bigger group of people, then none for a while, then more.

I saw a familiar face: a bloke who lives down the street from me came out. Small world; he’d been on that flight.

More and more people came out. Then none for a while. The staff by the gate went in and went down the ramp. Was that all the people?

No! Then came a few more… including, yes, my two sons, who had successfully navigated their way through LAX and Sydney. (Melbourne Airport may not be perfect, but it is blessed with four terminals that are all within walking distance of each other.)

They’d been away for four weeks, and it was good to see them back. They’d had a good time.

We came out of the secure area of the Qantas terminal to find TV news crews… though not for us of course. I asked one of the camermen I knew what the story was; he said they were there to film/interview arriving Renegades cricket players, following an incident the night before when a player got hit in the face with a cricket bat. Ouch.

Outside the terminal it was hot – far hotter than I’d experienced in Queensland. We walked back to the car and drove back home.

(This post backdated to the day it occurred. Posted on 20th January.)

” But had they made their connection? Were they actually on it?”
Good suspense, Daniel. But the fact even a troglodyte like me knows how to send and receive a text message makes your anticipation a little far fetched!
I’m glad your rendezvous plan worked out – nice to be waiting for people you know to take them home from the airport.