Day two of my quick trip to Brisbane.

Memo to myself: when in Queensland in summer, make sure the blinds/curtains are closed properly before going to bed.

Given no daylight savings in the Sunshine State, you can expect the sunshine to come through the window at about 5am. I found myself awake at about 5:20, and it wasn’t particularly easy to get back to sleep.

When I eventually got up, it was time to head north to Brisbane. 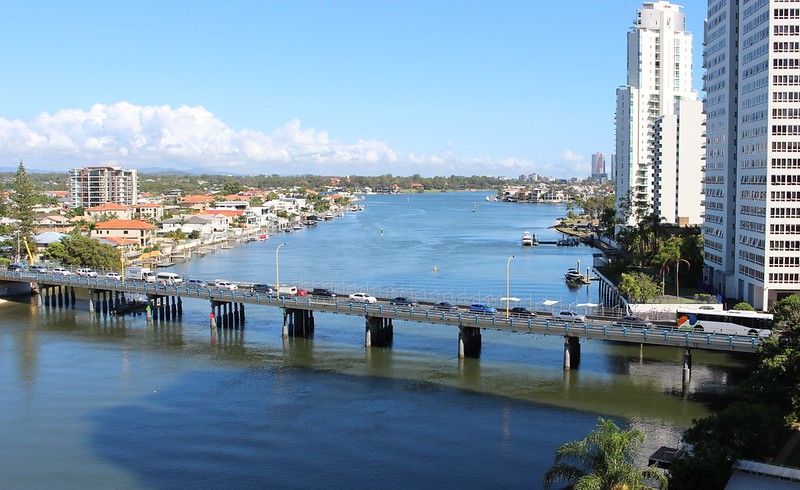 After the buffet breakfast ($12.50 if pre-booked, that’s reasonable — unlike some hotels that will sting you $20), I checked-out of the hotel. Google Maps gave which gave me two choices: the first was to walk a couple of blocks, wait a while, catch a bus to Nerang station, then train to Brisbane.

Or I could catch the tram a few stops, catch a different bus to Nerang station, then the same train. I took this option. It’s slightly slower but (thanks to the buses and trains only running half-hourly — but timed to meet) avoided waiting around for the bus — and I could see/cover more ground as I travelled. 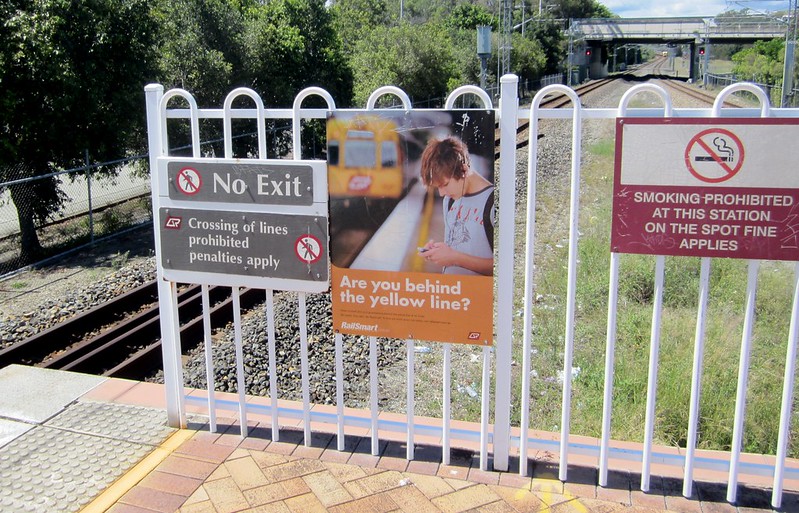 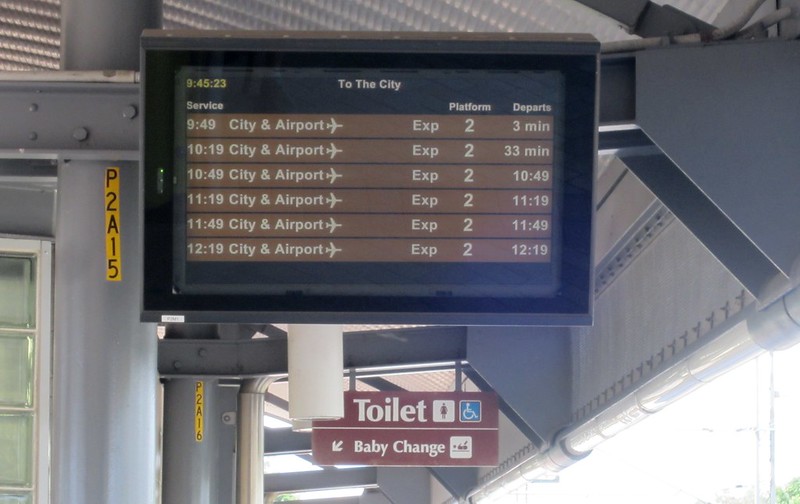 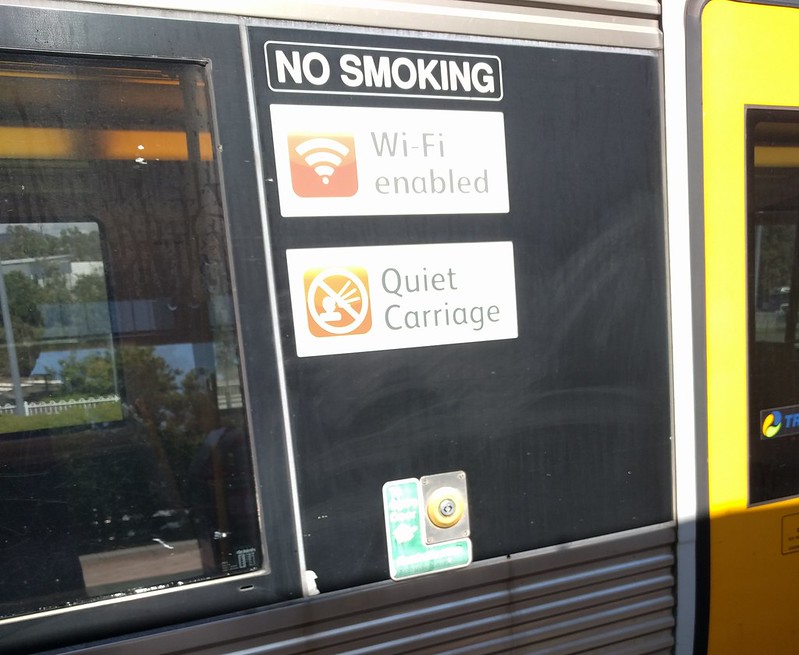 That all went smoothly and as the train pulled in, the signage on the carriages remembered me two things about Queensland Rail’s services: free WiFi (on some trains?) and Quiet Carriages.

I found a good spot in a Quiet carriage. This was going to be a good trip. I fired up the laptop, connected to the WiFi and got to work catching up on emails, while glancing at the scenery.

Whether she was aware of the quiet carriage I don’t know. Or perhaps she thought her granddaughter’s near-constant exclamations came within the definition of Quiet. Who knows. (“Look, another train!” “We’re going faster than that truck!” “Look at all the dead people!” — thankfully we were passing a cemetery; it wasn’t a zombie attack.)

No matter, I’m not a local, I don’t know what’s etiquette for the Quiet Carriage, so I persevered. Then the WiFi ran out. Turns out they only let you use a measly 20 megabytes. Oh well, you know, #FirstWorldProblems

At some point I decided I wanted to shoot some video of the passing scenery, and that it would be better without the girl’s commentary track, so I moved into the next carriage, which was quieter even though it wasn’t a Quiet Carriage.

We rolled into Brisbane and I hopped off at Fortitude Valley station and made my way up Brunswick Street. 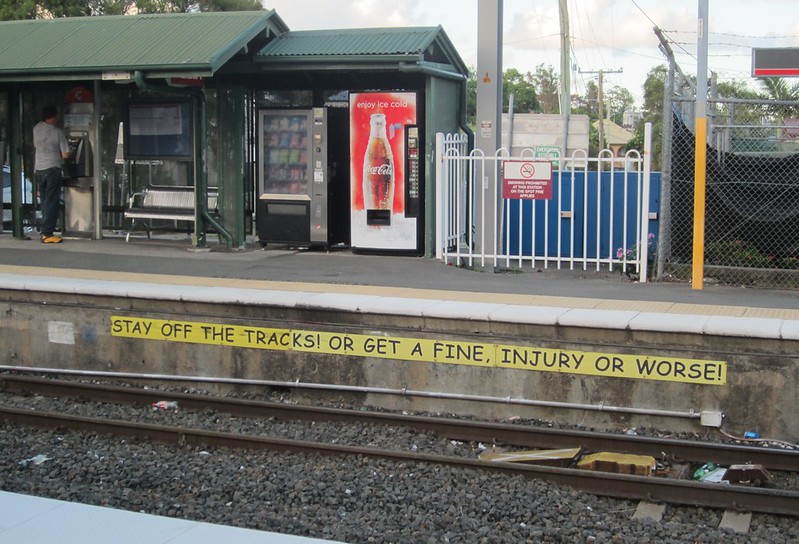 Fortitude Valley station. note the gap at most doorways, and the hump to assist with wheelchairs. 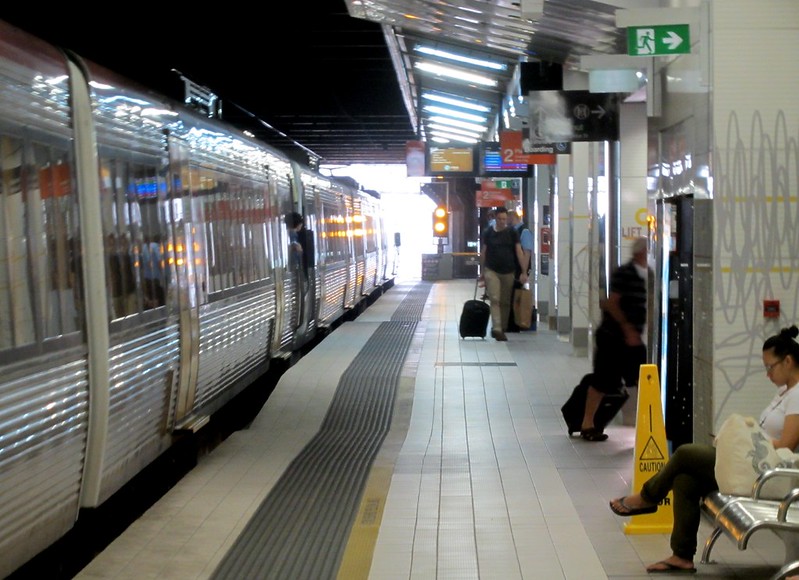 The area had the air of being just the wrong side of the grungy/dodgy continuum, but after negotiating a five way intersection with pedestrian lights that you could grow old waiting for, I found the hotel easily enough, not far from the station. (Looking at the map now, it seems to have been The Wrong Side Of The Tracks.)

Despite it being only 11:30, my hotel room was ready. Nicer but smaller room, not as impressive a view. I then went off to find my uncle, which took some time thanks to my confusion about which square we’d agreed to meet in. (Note to self: St George’s Square is not the same as Brisbane Square.)

We had a bite to eat then caught a bus along the busway to University of Queensland, then walked around the lake to find my Dad’s memorial bench. 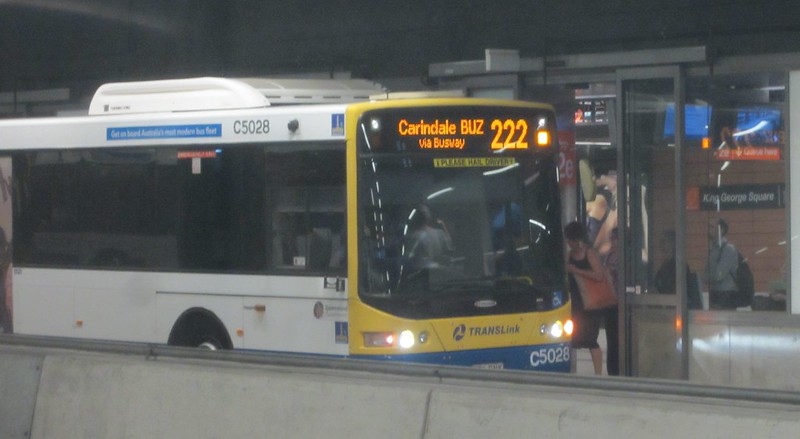 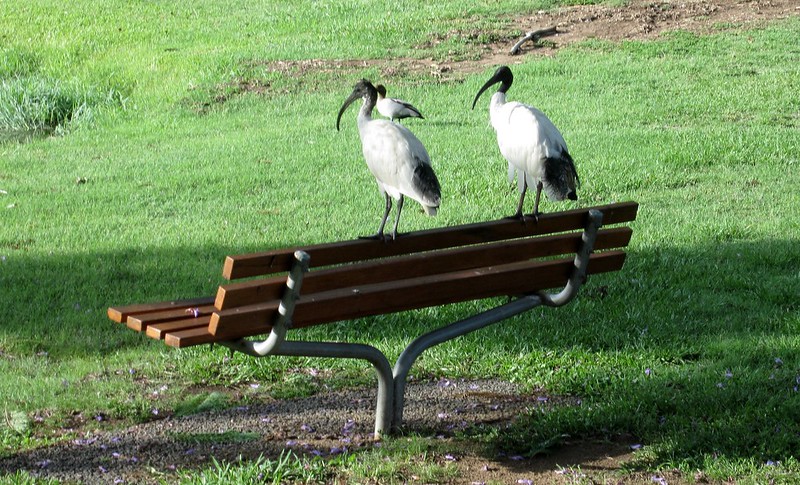 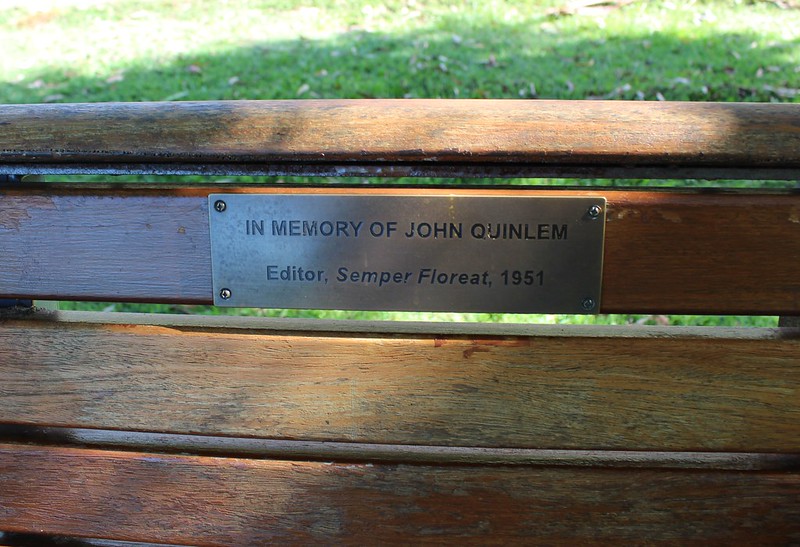 It seemed more shady than when I was last there; perhaps they’ve planted an extra tree or two. I’d gone prepared to wash bird poo away, but it was spotless, if perhaps in need of a little varnish (on the wood) and Brasso (on the plaque).

We sat on the bench and chewed the fat for quite a while, watching the swans and other birdlife on and around the lake.

Peak hour had rolled around by the time we caught the bus back. I hopped off in the City; my uncle stayed on the bus as it would take him close to home.

I wandered around the CBD for a bit, before heading back to the hotel for a cup of tea.

I’d pondered catching up with Robert (from local PTUA-equivalent Rail Back On Track) and/or exploring the new Moreton Bay rail link, but the day was racing away, and instead I went back to Fortitude Valley station and hopped on a train. 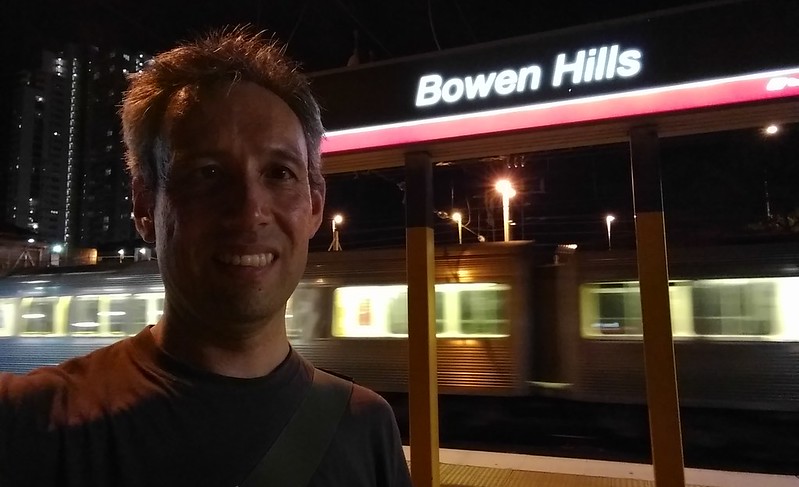 I ended up at Eagle Junction where I sat on a bench and munched some fish and chips and slurped down a ginger beer, before heading back, with a stop-off for a selfie at the excellently named Bowen Hills station — named after Sir George Ferguson Bowen, who at various times was governor of Queensland, New Zealand, Victoria, Mauritius, and Hong Kong. (Bowen Street at RMIT in Melbourne is also named after him.)

Back to the hotel, trying not to stare at the dodgy types hanging around at the front of Fortitude Valley station (some of them were now drunk, walking out into the middle of the road to goad the car drivers). A little TV and I started packing. I had an early start to head home in the morning.

(This post backdated to the day it occurred. Posted on 20th January.)

Nice report Daniel.
I’d love quiet carriages on our metro trains. Not to stop kids being kids but to stop constant chatter on phones.

Great report. How I miss getting on the Brisbane buses and trains (I used to live there). The busways are pretty great too.

I could never understand the huge gaps on the platforms, but I’ve seen those here too.