Yesterday’s horrific accident at Surrey Hills is a reminder of the many benefits of level crossing removal (though that one is not on the list).

With our local crossing at Bentleigh gone, it’s rather wonderful that the angst of further accidents is gone, and crowds no longer get stuck at the railway gates every second day…

Another benefit is that train users get a brand new shiny station.

But with the wet weather this week we’re able to judge how well that new station deals with the rain. 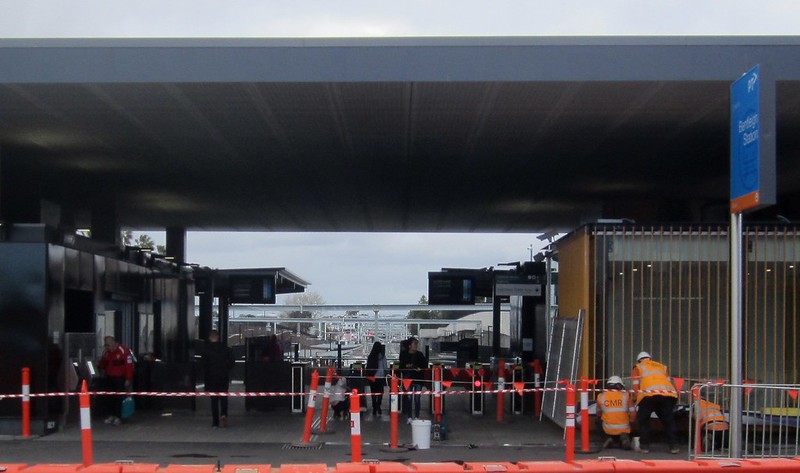 The entrance is pretty good – shelter along the street is reasonably well aligned with the nearby shops. In fact it’s very pleasing to have the station as an integrated part of the streetscape, rather than breaking it up as it used to.

While before there was a long uncovered walkway into the station, now you walk straight into the concourse, and there’s continuous cover down the steps (or in the lift) down to the platform.

And then it falls down. 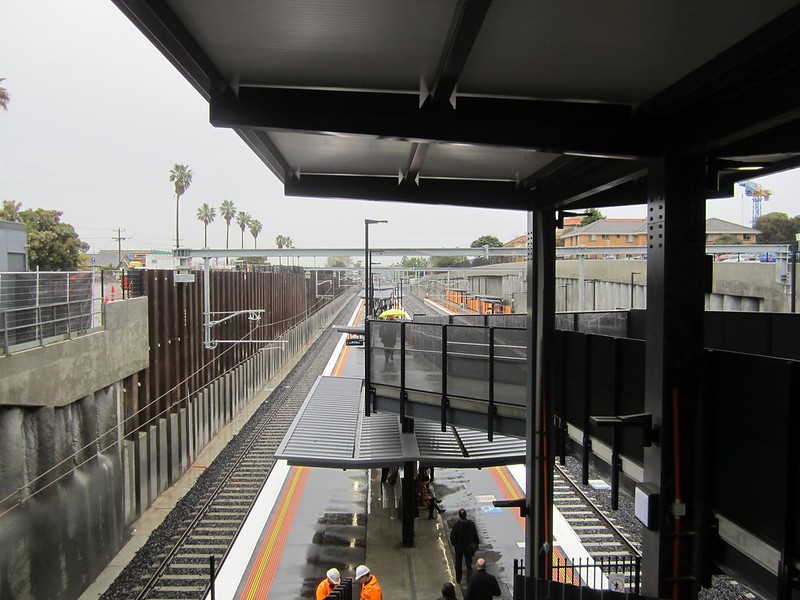 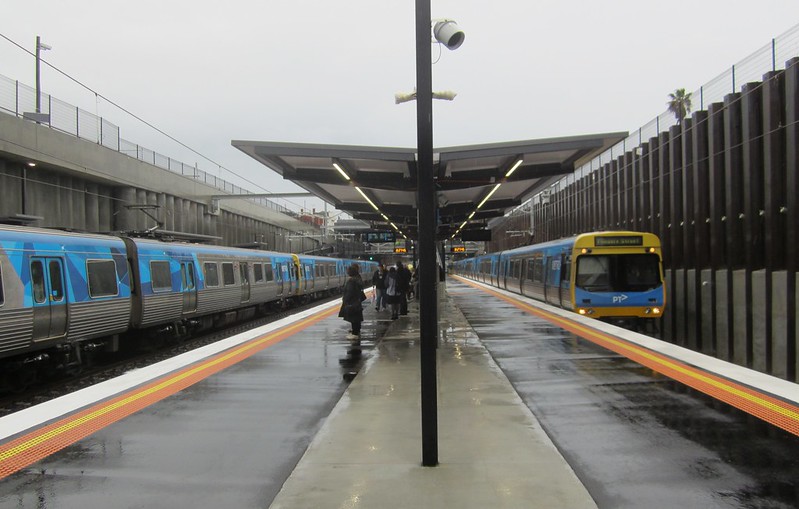 At McKinnon and Ormond the sections of platform closest to the entrance are under the road, providing a fair degree of cover. There’s more shelter down the platform, though it’s not continuous; there are substantial gaps.

However at Bentleigh, the only cover close to the stairs/lift is fairly small.

There’s a lot more cover at the northern end of the platform, but the only way to get there is to brave a long section of uncovered platform, or the even longer uncovered ramp from the concourse — which in dry conditions is very useful for spreading people along the platform, by the way, far more useful than at the other stations where the ramp doubles back.

So you have the old effect of many people huddling near the entrance from the rain, and thus concentrating on just one or two carriages of a six carriage train — not much better than the old station. 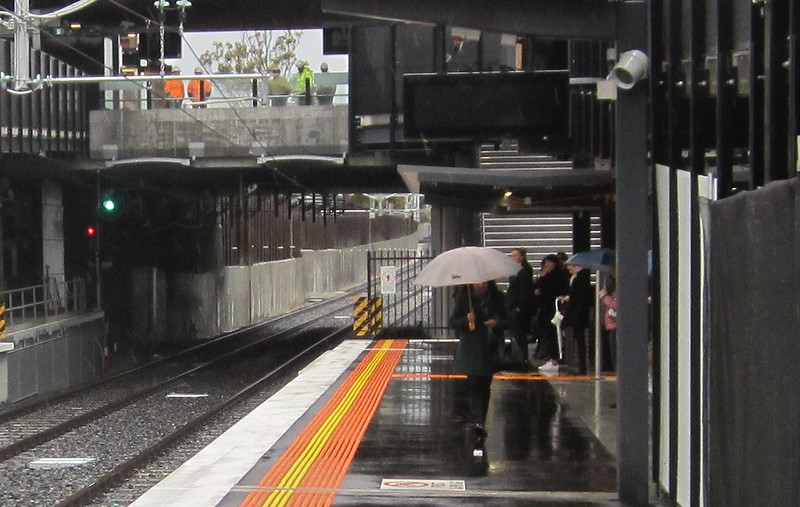 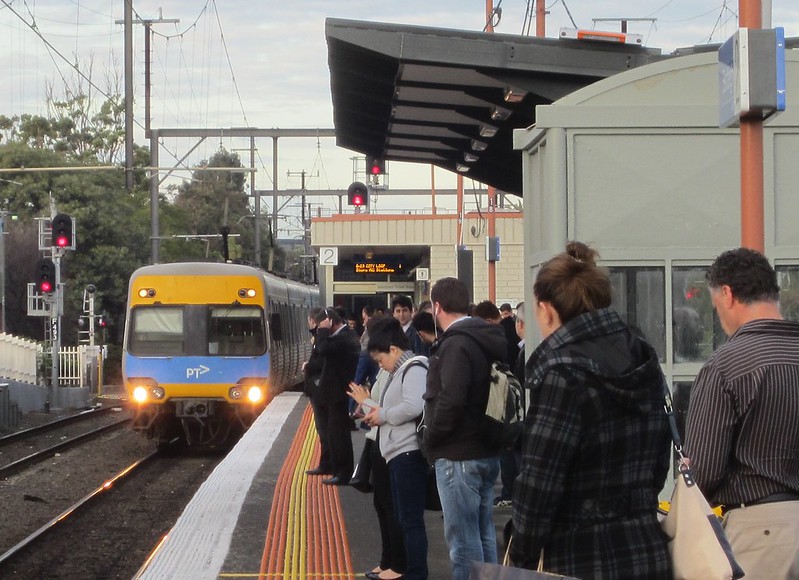 (All this applies to platforms 1 and 2, which are the most commonly used. Platform 3 seems to have slightly less cover, but nowhere near as many people use it.) 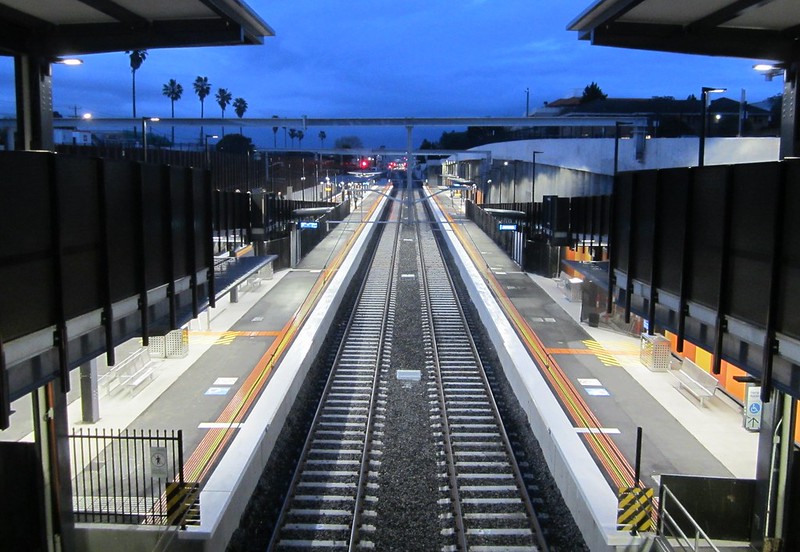 Even where the platforms are covered, modern designs mean there’s a gap between the edge of the roof and the train when it arrives. If it’s pouring with rain at the time, you’re still going to get wet. 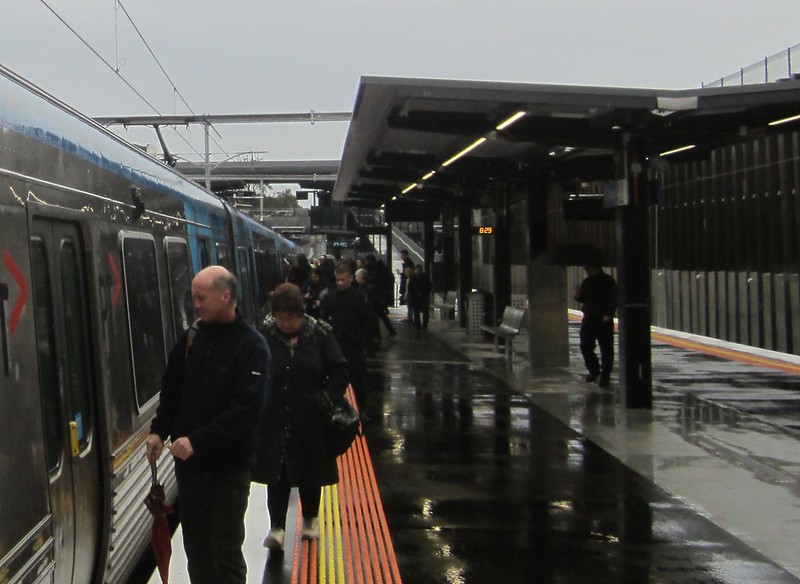 Why not cover the platforms completely?

If you’re rebuilding the station anyway, it would only be an incremental cost to have rain cover right along the platform.

The benefits are obvious — by providing shelter and shade all the way along, it encourages crowds to spread along the platform, decreasing boarding times, and more evenly distributing people along the train.

It may also help with PM peak alighting times, as in heavy rain, people don’t pause in the train doorway to find their umbrella. It would also reduce the instances of people running on slippery surfaces to avoid the rain.

It’s helped at Richmond, where full platform shelters were retrofitted (at a cost of $7.28 million), and is provided at our busiest stations Southern Cross and Flinders Street.

Granted, no suburban station is that busy, but if the benefits are numerous and the cost is minimal, then why not?

15 replies on “You can judge a station by its cover”

I emailed PTV complaining about my station recently having a new cover and seating installed yet when it rains it pretty much causes 3/4 of the sheltered area to have rain. I told them to look at who designed it and be more wary of it

I got a reply using copy/paste response about safety (??) and also future proofing it for future PIDs??? None of which makes sense to me because a more sheltered area would actually protect the PIDs from the rain.

The Surrey Hills’ accident looked dreadful on TV. The fact that two people were inside the car that was squashed flat.
A very good example of why we need to get rid of level crossings

Not sure how Ormond and Bentleigh compare, but there are small gaps in the roofing at the lift entrance and a few metres towards the street at the new McKinnon station. This seems to create a slip hazard in the wet, as well as just plain making it less pleasant than it could be.
Who designs these things?

West Footscray station (post RRL) has cover the entire length of the platform, but same issues with gap to the train. And if it’s windy, a significant part the undercover area will still get wet, seeing as the wide rail corridor at West Footscray (at level) has basically no cover from surrounding structures. Not sure why West Footscray got full cover -Footscray and Sunshine didn’t.

This is a really good post – I remember the PTUA list of requests for CD9 and every one of the suggestions would make those stations bearable. What concerns me is that not one design has been released to the public of what any of the stations are actually going to look like in detail. All of my requests to LXRA to release the designs have been met with the ridiculous response that I should read the consultation document. This contains nothing but some vague design principles stemming from what they call consultation.

I feel they are delaying releasing any detailed station designs because they know the public response is going to be overwhelmingly negative, and this brings suspicions of cost cutting. So I won’t be surprised if there is no station cover for any of the CD9 stations, and that they are all built in the same brutalist, minimalist style as Gardiner, ormond, etc.

The funny thing is LXRA are trying to replicate singapore with skyrail, but the Singaporeans understand good basic function at all of their stations, and in some of the newer ones, have built some beautiful structures/designs as well. I doubt LXRA is capable of reaching the level that countries like singapore set

The cause of the train/roof “gap” is apparently the modern design standards that dictate a greater safety clearance between roof and overhead power than in the past. Hence, the beautiful and functional shelter at the MATHS stations would no longer be permitted for a new build. To eliminate the gap, the roof would need to be higher than the overhead power and supporting wires – like the decked sections of NMC3, and Southern Cross.

The cause of the other “gap”, along the length of the platform, remains unexplained. But it’s probably a combination of shortsightedness, lack of human-centred design, and penny-pinching.

I would argue that being in a trench is more dangerous if there is a fire, or an explosion of any kind. You can not get out as quickly as you could with an above ground station. You are also more likely to experience flooding too. Who predicted the level of rain we had this week.

I am not pro grade separation as a rule, but do believe we need to remove all that are along the busiest roads and railways. To Dandenong Ringwood, Cheltenahm are three on my railway list. Perhaps Geelong needs to be there too.

I somewhat support full platform cover for the comfort of passengers.

We can do a lot to reduce level crossing deaths, by putting in cameras, such as red light ones, and perhaps put booms across the whole road. You can put sensors in the road surface in the crossing, and keep the exit side up until that is clear.

I would hope that there’s not many people living in Victoria nowadays who think level crossings are a great idea and we should keep them – for various reasons I think it’s pretty clear most should go at some point and debate around the process and methodology doesn’t diminish that. I was horrified by yesterday’s accident and I feel for everyone involved, the reality is though that any government spending will be prioritised politically and sadly there will always be cases of bad judgement/timing/luck that no amount of infrastructure changes will eliminate.
On another note, the lack of complete platform coverage in new stations remains a mystery (much like the designs themselves until the stations are just about finished), surely it’s not that much more expensive or am I missing something? It’s not much fun waiting out in the open on a hot January day let alone a wet miserable September one so even though their form in this area suggests otherwise, if we’re stuck with elevated stations I really hope the LXRA eventually comes to the party on CD9 and at least gives us some decent shade.

Re Surrey Hills, is that the first death at the crossing since the proposals in the 70’s, or have there been others?

Re shelter, having gaps made sense back when it was legal to smoke on platforms, but now that’s finally been banned, new stations really should be sheltered along the full length from opening, rather than having to retrofit later.

The Surrey Hills accident was nasty, but was it not completely avoidable by simply not stopping on the train tracks? Is that crossing any more dangerous than any other?

@TrainGuy, one of the notable features of the new station is a shelter specifically for the PIDs.

@Af, for some reason LXRA has previously put detailed designs on display at public events, but not online. Weird.

@Andrew, yes the Surrey Hills locals fought the crossing removal, though to be fair the road authorities wanted to demolish numerous houses to re-route roads as well. (For those who haven’t seen it, see Marcus Wong’s blog post)

@TranzitJim, how is an aboveground station any easier to evacuate than a below ground one? For that matter, ground level stations are closed off from their surrounds too.

@David, I believe Roderick Smith has said there have been other deaths there.

@Hamish, the ALCAM study calculates the risk level by taking into account the number of trains and vehicles, as well as factors such as visibility. Once the other crossings on the government’s list of 50 are done, Surrey Hills will rank number 2.

If there are ways (including grade separation as well as other measures) to reduce the risk, then they should be pursued.

In respect to ground level platforms, you can perhaps jump off at the end of the platform, or climb over the fence.

I do accept that elevated platforms such as SkyRail, may be just as bad as the trench. Depending on the height of the elevation, it may be easy enough to jump off at the end of the platform anyway?

There needs to be a device for people at level crossings, of which will state how much gap exists ahead of the crossing. Most motorists get caught because they can not see what is going on on the other side of the crossing.

Adelaide built a new station with 3 platforms for $16.5m, with a roof that covers all platforms and the track in-between. The cover is long enough for 6 cars. Support for the electrical catenary is built into the same structure. (I have used the station several times on visits to Adelaide.) I would hope a similar structure would be part of the SkyRail stations, because at 6m above ground level there would be more wind chill.

[…] low enough that it actually provides shelter from rain that is not exactly vertical — unlike some earlier stations. Direct ramps like this also help distribute passengers along the platform, unlike twisty turny […]