With Ormond likely to get its tower (whatever the height might be), what of other nearby suburbs?

The transition is already underway in Bentleigh and many other areas. Around the station, numerous developments are going up.

And in principle, I have no problem with this.

Buildings along the main street (Centre Road) in particular make sense. Car parks behind the shops provide a buffer that can help prevent shadowing onto single storey homes.

The residential zones introduced a couple of years ago mean this is spreading to nearby streets. But heights are staggered as you move away from the station, so it seems workable to me. Here’s how it looks in Bentleigh. 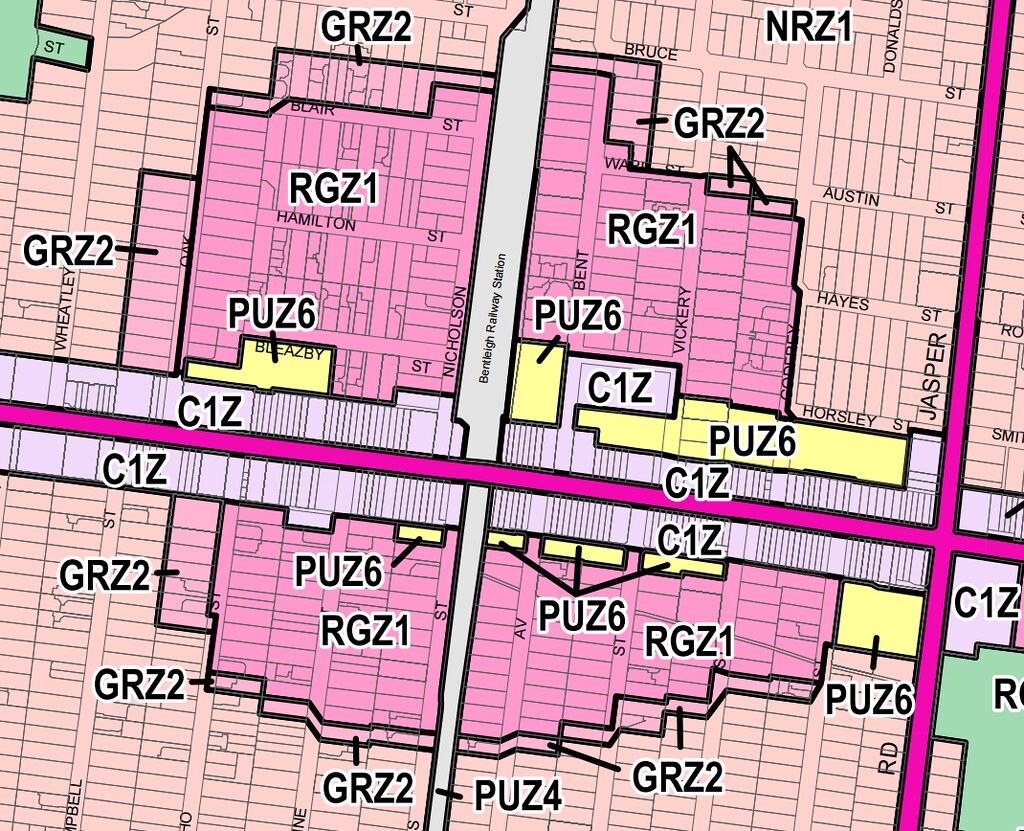 (Source: Planning Schemes Online. Downloaded 26/7/2016. May have changed since.)

*not in Bentleigh, but in Carnegie – see below

Bentleigh has had densification of various types over the years.

In the 70s and 80s, some blocks of flats went up, mostly 2 storeys, many of which are still around today — though nowhere near the numbers you see in inner suburbs like St Kilda. 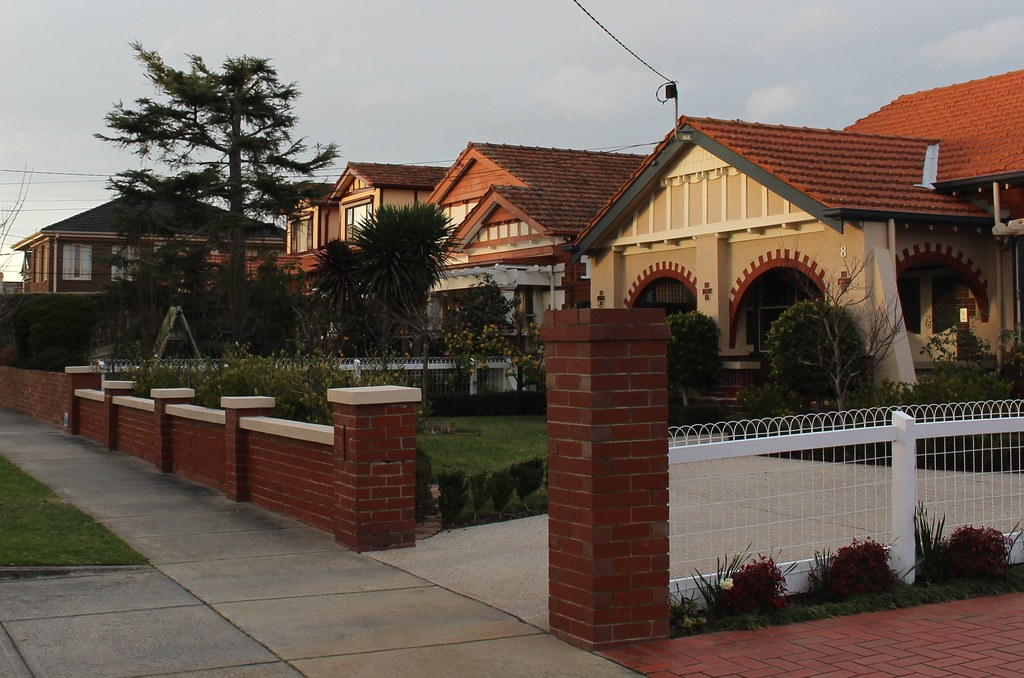 Since the 90s there has been a lot of subdividing. Back yards have shrunk, with either new houses being built behind old ones (this is the case behind my old house) or houses being removed and replaced with 2-3 homes, typically semi-detached townhouses.

Meanwhile a lot of homes have had extensions, increasing capacity but not necessarily occupancy. 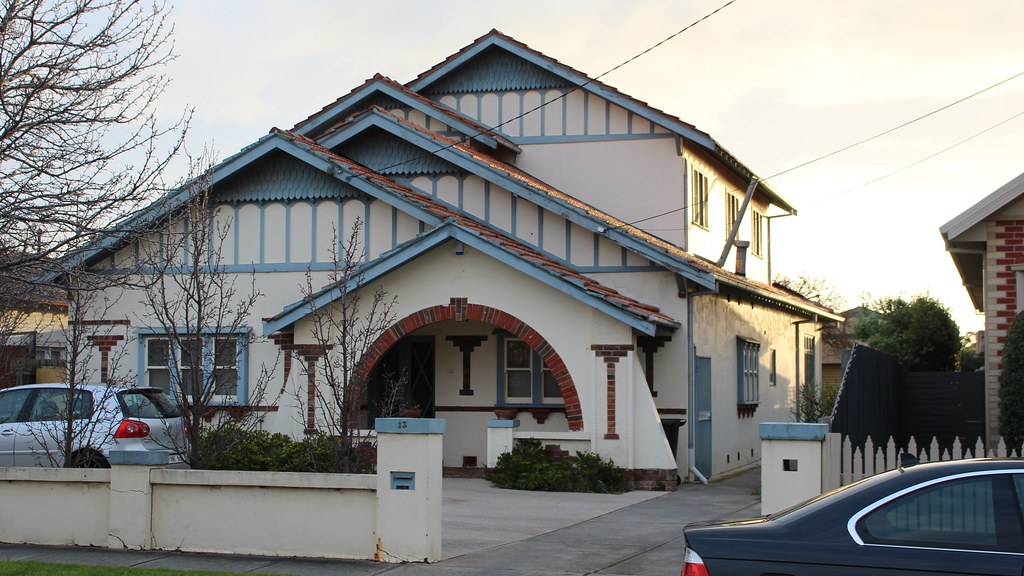 Buildings are bigger closer to the station. Below you can see the main street, Centre Road, a retail and residential building about five years old. It’s big, but you barely notice it at street level if you’re walking around looking at the shops. If it built were today, I’d be surprised if they didn’t aim higher. 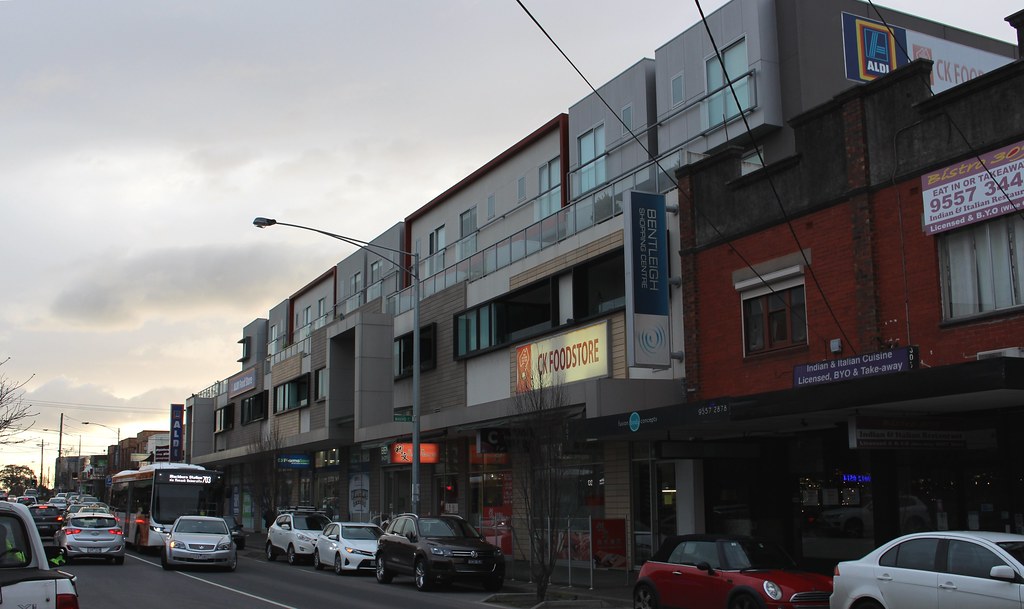 The zones above, introduced a couple of years have triggered a lot more apartment developments off Centre Road. Below is Mavho Street (3 storey limit on the west side), looking towards the Aldi building pictured above. 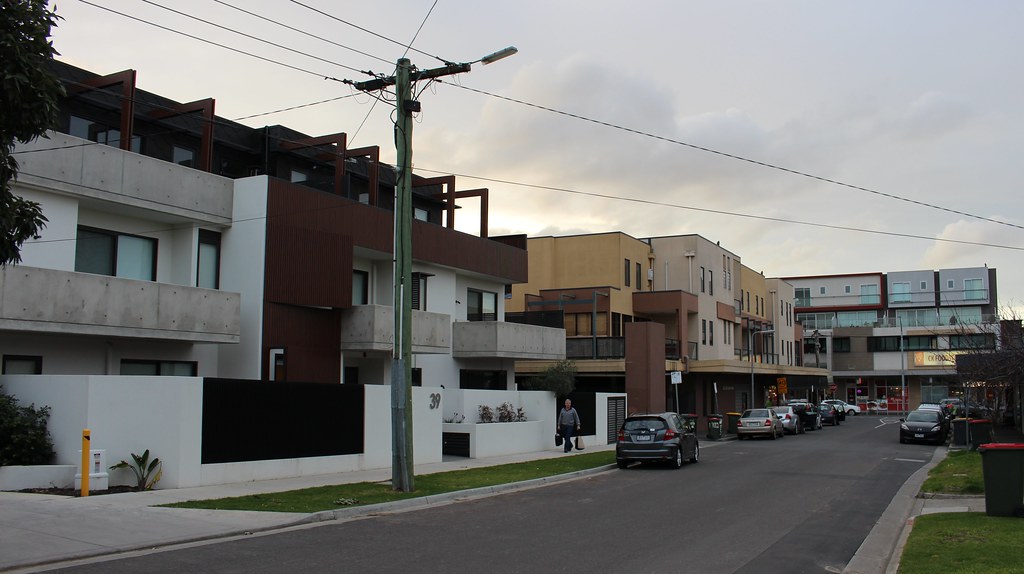 Lorrane Street: This one has just been completed. It’s not really a surprise that all the recent and current developments go right up to their zone’s height limit. 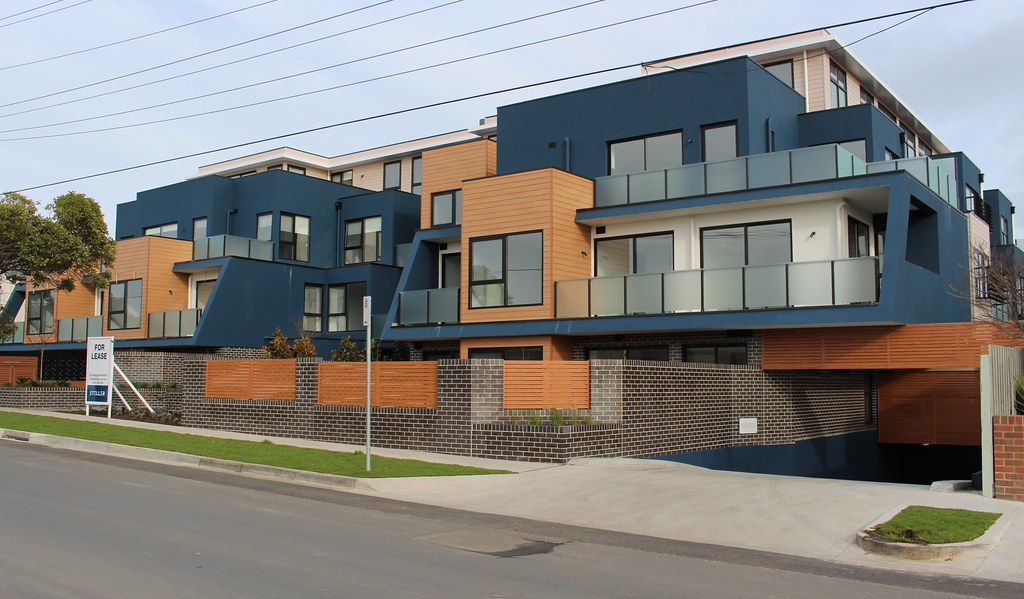 Bent Street: It’s not hard to anticipate that many of the homes in the RGZ1 4 storey zone will be re-developed in this way in coming years. 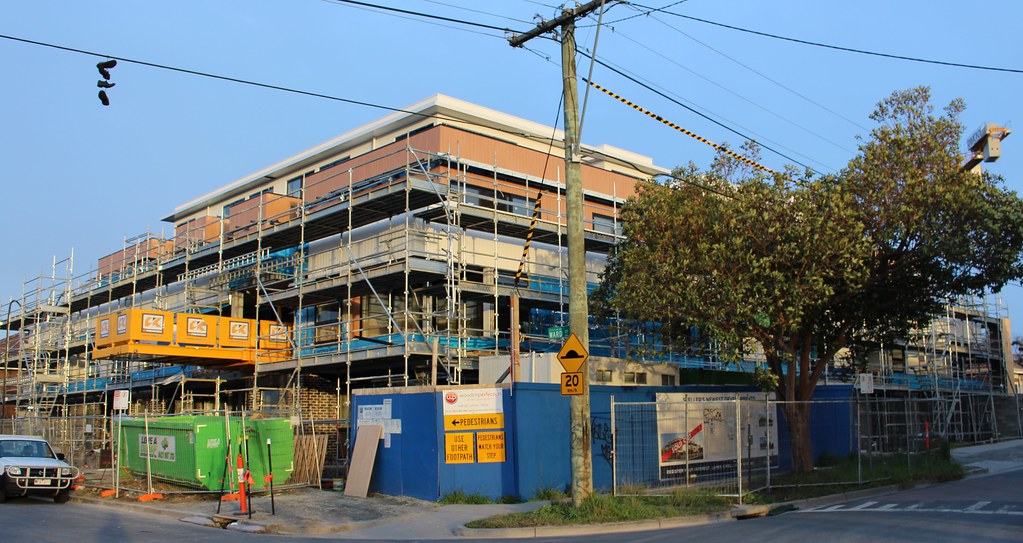 Clearly some home owners have seen the writing (and the dollar signs?) on the wall. 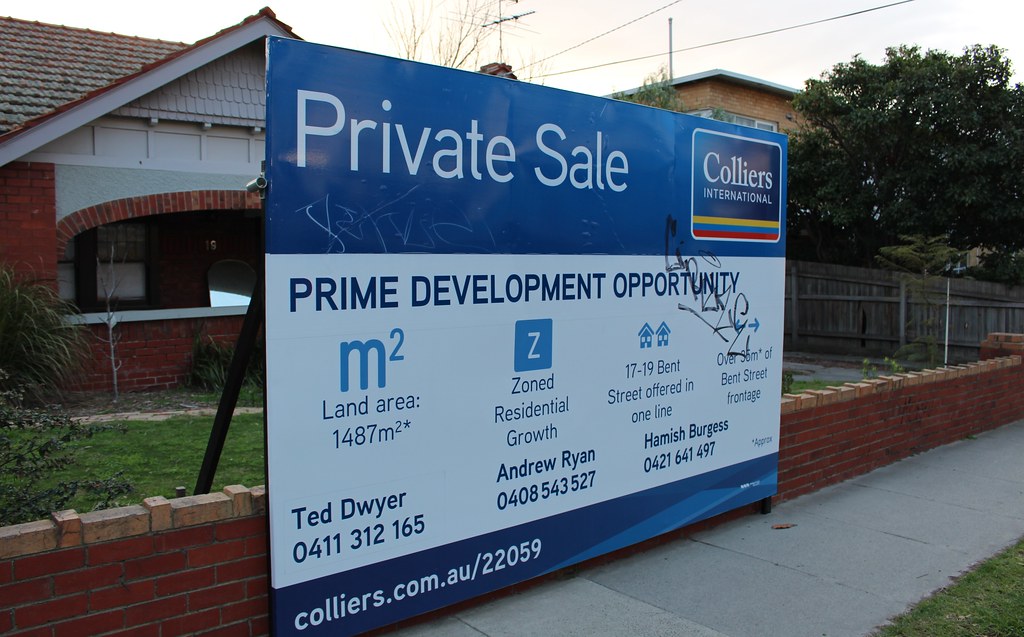 At the southern end of Bentleigh (near Patterson Station), and also in Mckinnon, there’s been development around the shopping centre. Despite the garage doors facing onto the street (not ideal for pedestrians), I find the scale and look of these homes quite appealing. 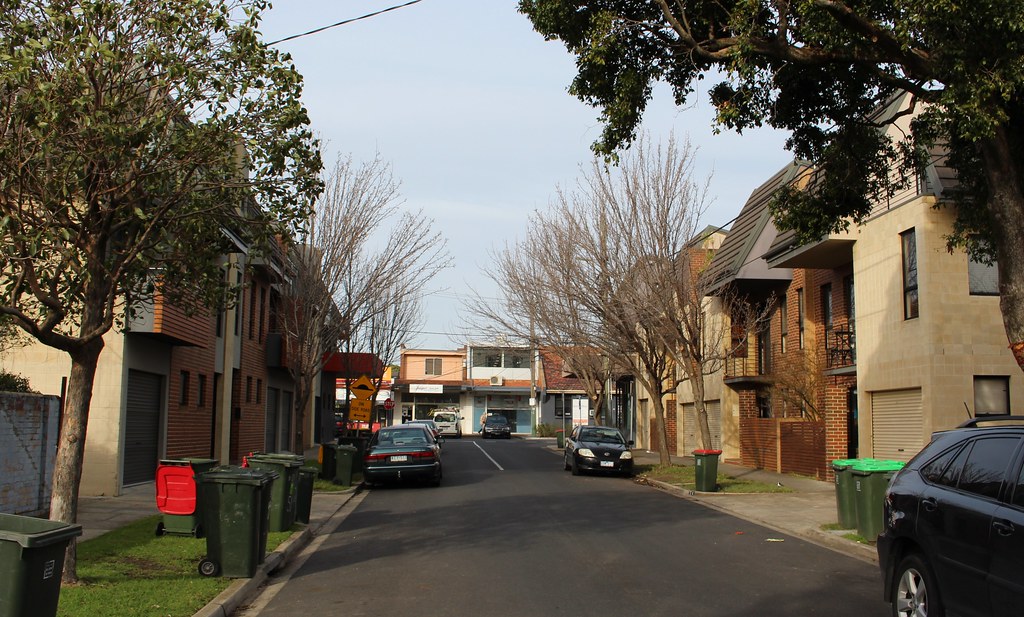 With my local resident hat on, I would like the benefits of my suburb to be available to more people, so I see nothing wrong with this, provided designs are good, nobody is forced out, and anybody who does sell up to developers is doing well out of the transaction.

If anything, I think the 3-4 storey limits should be allowed a little further from the station.

Of course there are many lovely older homes that should be preserved. Height limits across most of the area (away from the station) can help with this, but inevitably won’t save them all.

The commercial zone along the main street should be developed to ensure it includes destinations, not just residences, to increase local employment and activity — rather than the area being just a dormitory suburb. (It’s good to see the chain stores/anchor tenants are staying put in the shopping centre.)

As I said above, it makes sense to increase urban density in areas with good access to services and infrastructure. It’s good to see it happening.

Also worth looking at: the area around Carnegie and Murrumbeena. 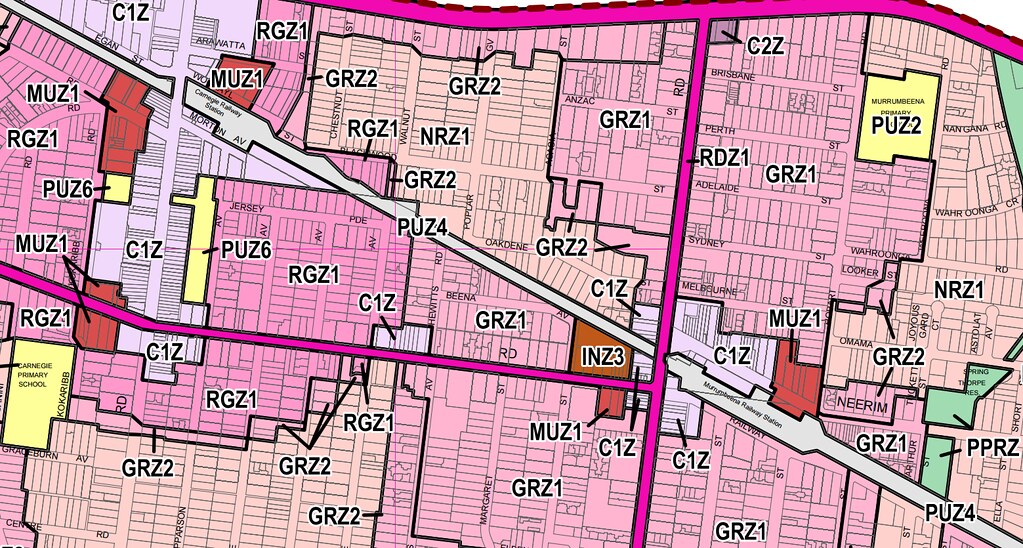 (Source: Planning Schemes Online. Downloaded 26/7/2016. May have changed since.)

This is particularly interesting in the context of the skyrail debate; most of the areas alongside the rail line have 3-4 storeys permitted (higher immediately around the stations), though when and if this occurs of course, nobody knows.

How is it in your neighbourhood? It’s worth finding out, especially if you’re planning on buying, and/or living there for a while.

Update 22/12/2016: This Age comment piece from Clay Lucas notes development in Bent Street and around the local area.

“it makes sense to increase urban density in areas with good access to services and infrastructure.”
For many decades there hasn’t been proper spending on infrastructure. We don’t have adequate infrastructure for the current population – public transport is chockers and the roads are constantly clogged. If people can’t get on trains, what’s point on having increased density near stations? We need to catch up and provide infrastructure for the existing population. If population growth races ahead of the supporting infrastructure, we’ll lose the things that make Melbourne and its suburbs a good place to live.

@Fred, point taken, but bear in mind public transport systems are very scalable. We haven’t yet moved to high capacity trains or signalling; there’s huge scope to increase carrying capacity, as demonstrated by the Dandenong line.

As with I suspect much infrastructure, upgrading is still cheaper/quicker/better than building everything from the ground up in a new suburb.

Interesting that developers are putting in underground car parks in residential areas in middle suburbs like Bentleigh. Not long ago, this only occurred in inner city and posh areas. This indicates land values have shot up, at least around railway stations. Reinforces your “value capture” blog recently.

I suspect that has as much to do with more rigid height limits, and the higher ratio of car spaces to apartments in the suburbs than the inner city. Not really much basement car parking in inner city high rises – it’s mostly podium parking. Will be interesting to see if this starts to change with the more rigid height controls in the CBD

@Fred
“public transport is chockers”
Is is only busy in one direction in the morning peak and vice versa in the evening (as there are no off peak fares or cheaper fares for short trips). Buses are close to empty for most of the day due to poor route design and trams have poor signal priority drastically lowering their capacity.
Low density environments create this scenario.
Pushing for multi use activity centres (ie Bentleigh, Box Hill, Oakleigh) will help disperse trips around the system ie counter peak and off peak as well as adjusting fares encouraging trips outside the CBD.

“roads are constantly clogged”.
Well that’s true but you also have surges in peak times, school times and Friday afternoons. This could be easily solved (not politically) by user charges and reduced subsidies for car parking.

Infrastructure investment is important but it is more important to utilise the infrastructure more efficiently rather than just adding lanes and building more parking which is expensive and inefficient as these extra lanes and most parking is only utilised in peak times.

But will these new apartment blocks have elevators?

It is a pain to deliver furniture to flats that do not have elevators. If grid storage batteries are getting cheaper, I bet elevators are too.

All new flats should be built in such a way that a visitor on a wheelchair can go from the footpath to the apartment without having to climb any stairs!

[…] local suburb is increasing in density, and (not entirely disconnected from that) it’s also interesting to see how the retail strip […]

Funny, I just sold OUT of Bentleigh due to all of this. The suburb I had bought into is rapidly changing to the extent that my neighbourhood did not at all resemble the neighbourhood I had committed my life savings and careful consideration for liveability. Planning rules mean little when developers march off to VCAT to have any of these planning rules overturned. I saw it happen numberous times on my street much to the chagrin of the immediate neighbours. This whole notion of building ON boundary lines also seems to be a Victorian thing and is incredibly short sighted.

On that note, I really don’t understand the view that lowering of living standards (which all of this is) is somehow a good thing. Crowding, lack of privacy are hardly things to champion. I’ve lived in some of the most crowded regions of Asia, but it felt more liveable due to the amazing infrastructure and convenient services that came along with it.

Australia simply does not know how to do high density and it really shows.

[…] lots of apartment developments recently, the stations between Caulfield and Moorabbin have become some of the busiest on the line. PTV […]

[…] to patronage growth, particularly residential growth around stations, there is still crowding at peak times, to the point where (to my eye) it is causing load breaches. […]