This is not the first time I’ve spotted something like this: real estate agent signs blocking bike lanes.

I’m not sure why anybody who thought about it for more than a second would think it was a good idea to leave signs there. Cyclists would either be forced out into traffic, or if they didn’t notice the signs, collide with them.

In this case, I decided to move the signs out of the way. They were still quite visible to passing motorists — along with a plethora of other signage nearby.

It's OK @CastranGilbert, I've moved these for you. Should help you avoid causing an accident. #BikeLaneNotAdSpace pic.twitter.com/0eqDwJ5AnG

Granted the bike lane isn’t very wide at this point anyway, but whether the cyclist uses the lane or takes the traffic lane should be up to them.

It’s not the first time something like this has happened. From my observations, this particular location (Neerim Road, Glenhuntly) has been problematic for some weeks.

Real estate agents are also notorious for blocking footpaths. The photo below was snapped just after a lady with a mobility aid struggled to pass this giant flag. 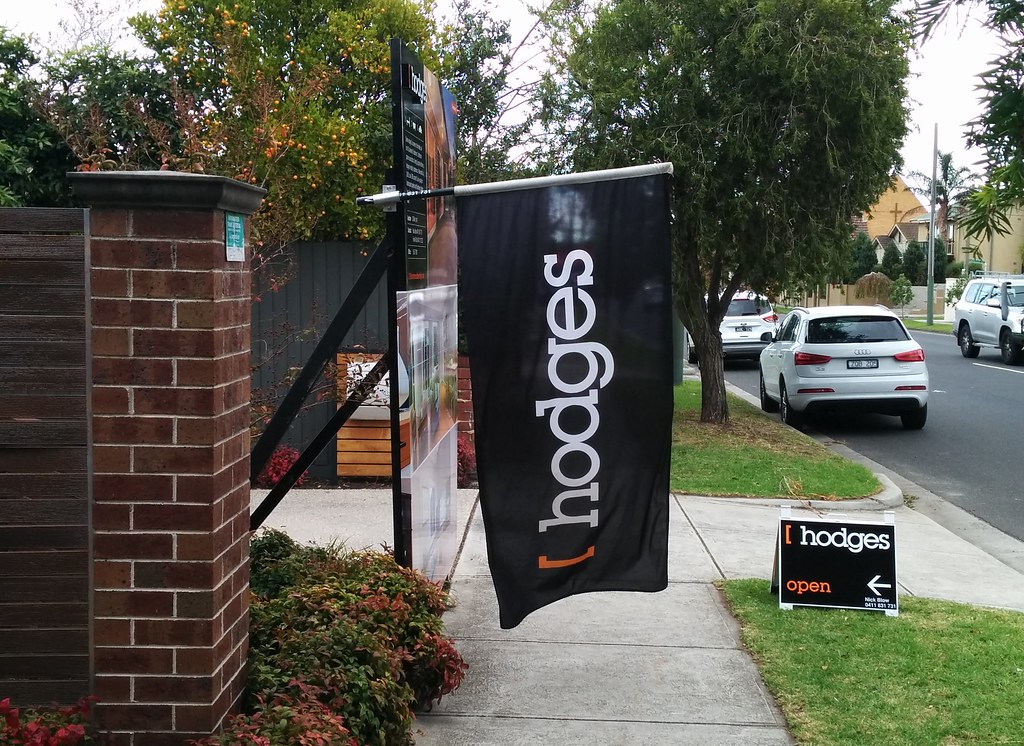 Some agents have been fined for this.

It’s a similar issue to the illegal parking of vehicles over footpaths. While able-bodied people can walk around, those with prams and mobility aids often can’t. They might be forced onto damp or difficult-to-navigate nature strips, or even out onto the road.

Real estate agents obviously need to promote their properties, and make sure that people can find them. But they need to find a way that doesn’t involve blocking bike lanes and footpaths.

After I approached Hodges last year about the footpath instance pictured above, they said they were looking into ways of preventing that in the future, which is good to know. For instance smaller flags above the footpath users might work well.

So far, Castran Gilbert have been silent, but I hope they’re reviewing their practices.

Update 5pm: They have now responded. It’ll be interesting to see what action they take, and whether the issue continues.

We take this matter very seriously & have reminded our team of the correct practices. Thanks @danielbowen for bringing this to our attention

Stephen P emailed me a link to this story… the ultimate in blocking bike lanes… this one is blocked by a huge sign (Variable Message Sign) reminding motorists to give space to cyclists!

Real estate agents have their reputation for good reason.

You only got this response because you are a borderline celeb.

There is also the issue of trees (on nature strips) overhanging onto the footpath or road.

@Jacob, I use the Snap Send Solve app to report egregious overhanging, and my council seems good at sorting it out.

With the ease of lodging reports these days, you can often get ‘minor’ (but with impacts, ie as in this story) sorted with only a few clicks through apps, vs lengthy phone calls etc.

My local council has said they support people using these tools, as they themselves can’t be everywhere at once – they actually rely on reports to help prioritise issues and assist compliance with bylaws, etc.

I have found this issue on Punt Road in the past. A huge sign on a trailer (like the one in the photo in the news article you have linked to – only larger) the width of the footpath was advertising future road closures – unfortunately it left no room for pedestrians who had to walk on the road (Punt Road!!). It seems as if people don’t use their brains at all. A quick call to the Melbourne council seemed to resolve it anyway.

[…] Real estate signs blocking bike lanes and footpaths — some RE agents have been fined for this, but it remains a […]

[…] with motorcycles parking in pedestrian spaces, and advertising and vehicles blocking footpaths, this is one of my pet hates. And the common theme is that […]

I wanted to put the other side of this perspective in, Realestate agents are hugely restricted on what they can put out, The only things you can actually put out is the signboard flags (The one in the photo above) And A-Frames, In other areas this is not a problem as agents are giving a lot more freedom in what they can put out, Pretty much meaning it’s rare to see realestate advertising blocking foot paths and traffic, All realestate agents are trying to do is get the best advertising for there clients, Also staying in there guidelines. I’d suggest getting rules changed rather then sending complaints to council, Which only makes the situation worse.