Public transport fines are changing. Today the Victorian Ombudsman released a damning report into the fare evasion regime; so did the Government Department Of Everything.

And importantly, the Government announced numerous changes including the scrapping of Penalty Fares; better training, equipment and discretion for Authorised Officers; upgrades to Myki to improve online top-up times, and make readers easier to use.

It’ll take effect in January. Some people have asked why so long… I suspect the answer is that when you’re talking about changing equipment and procedures across a large department and hundreds of people, it just takes a while. 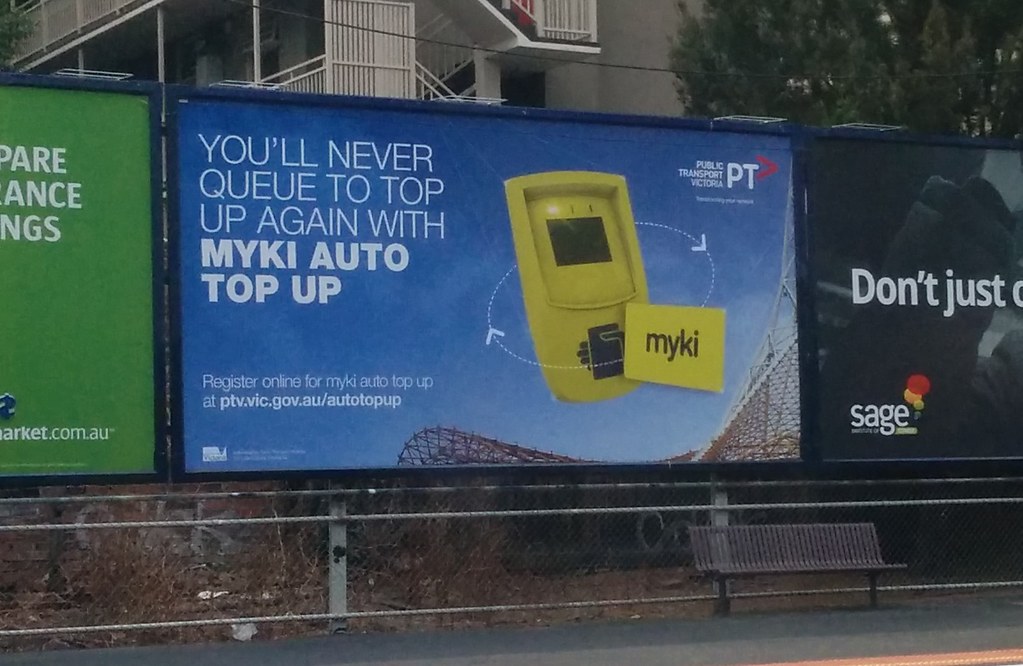 Anyway, rather than repeat myself, I’ll just point you to this opinion piece in The Age: Myki changes are good news, but unexplained oddities will remain

TL;DR: It’s a big step forward. Penalty Fares were problematic; getting rid of them makes sense, as does improving AO operations and some (but not all, alas) aspects of the Myki system.

I would really like to see the push for single-use tickets.

Singapore’s one for the trains works really well, using paper-based touch on tickets. The downside is that it only works on the train.

90-minute top-ups – will that only be to train stations, or are they going to do some magic, for trams and buses?

One of the other things to point out is that B-Pay top-ups might still take five days. I use B-pay, because my daughter is too hurried to top up at a machine, and I can set it on a schedule (at the bank). But PTV/Myki needs to change the email they send out, for a B-pay top-up. The email currently says

Thank you for topping up your myki … using BPAY. Please allow up to 5 business days for your request to be processed. Once your request has been processed, your top up will be added to your myki the next time you touch on at a myki reader or use a myki machine.

The problem with that is when PTV have received the funds, most of the delay has already occurred (ie on the rusty piece of telegraph wire connecting the banks’ B-Pay systems). It should really say We have received your funds which will be processed within 24 hours.

If they really wanted to be practical, they’d include a link to your myki-topup-instant blog post. But what hope do we have, when government departments won’t even say google “…” (preferring you can type “…” into your Internet search engine, example at Centrelink).

That has to be no tickets on trams. And I have a cheap(?) solution. Put the Metcard machines back. They can spit out single-use tickets just fine (don’t worry about the mag stripe, that’s irrelevant). Single-use ticket users will have to wave them at gate staff to be let through, but that’s miles better than the current situation.

The second-most bonkers thing is no single-use tickets. That’s easy: print the ticket onto receipt paper (at CVMs, BOMs, and bus driver terminals, as well as machines on trams).

I’d also prefer to see a practical rule introduced for bus top-ups (by driver). Top-ups in multiples of $5 only, unless you’re supplying exact change, which will speed the process up. That means the driver only ever has to hand you a multiple of $5 notes as change, no fiddling with coins.

It takes one-two business days to transfer money. It takes two business days to pay a bill (by B-Pay). Yes, phone top-ups by credit card are instant, but 1. getting call data out of it takes a bizarre 24-48 hours, and 2. seeing the top-up transaction on your credit card statement also takes a bizarre amount of time (given your bank sees the transaction in real time).

I think 90 minutes is a good deal.

2) Extending Myki out to other regional towns. I suggest anywhere that V/Locities run as a next stage. i.e. Echuca, Maryborough, Ararat.
And I would hope that Shepparton is not far behind too please.

AFAIK they still use receipt paper tickets in Brisbane and on Singapore buses. The issue with these though is that it wouldn’t transfer well to automatic gates at train stations. I suppose they can have manned gates, the same way they cater for regional ticket holders transferring onto the Metropolitan trains.

@Arfman (paper tickets), In this case, we’re not talking about making it easy, just simply letting (eg tram) travellers be on the right side of the law.

There are two matters you have tackled in this post.

First off, the fine mess. I feel the proposals are somewhat good. I do have sympathy for those who make innocent mistakes, especially if you are a tourist. On the other side, there must be some real punishment for those who choose not to pay their fare.

As for odditiees with MyKi,

+ All Vic Government transport services must be MyKi. That includes all regional towns.

+ MyKi needs to be included where VLocity services operate to, as well as the D cars in Intercity trains, as far as Marybourgh and Shepparton etc.

+ It would also be handy, for MyKi to be used on other transport links, such as Ferry services, Stoney Pt – Cowes and Sorrento – Queenscliff.