A day (and night) in the countryside began by heading out of Melbourne in the car.

I learnt a lesson on the way, somewhere near Sunshine: if you’re going to try and overtake (well, “undertake”) a truck on the left from a standing start, be at the front of the queue at the lights AND have plenty of space. The lane ended sooner than I thought, and the cars in front took off slowly. Thankfully the truck driver was paying attention, and gave me a bit of extra space to merge in.

Anyway from the Western Highway it’s a beautiful drive up to Trentham through the bush. The target was lunch at our friends’ place just south of the township. I’ll put in a plug for them as they’re selling the house: it’s a glorious mudbrick home, with a lovely walled garden and a tower! You’ve always wanted a tower, haven’t you! There’s even a sundial or two. 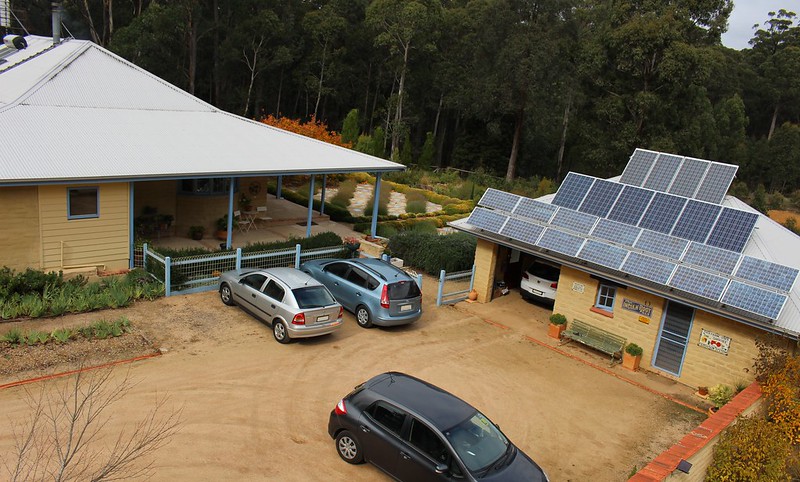 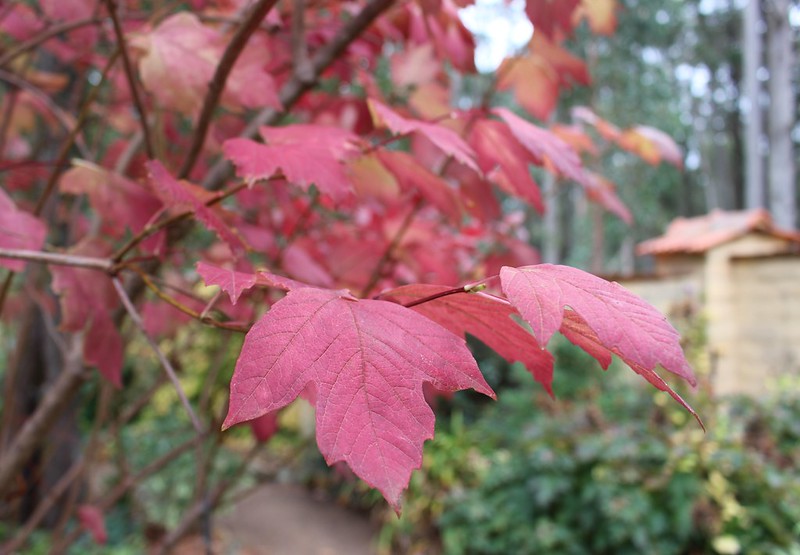 From there we headed north, up through the town, then via Dayesford to Maldon to stay the night in a B+B/French restaurant called the Rendezvous, in the old Eaglehawk hotel. The owners of that are also selling up. After settling in, we had a walk around the town. 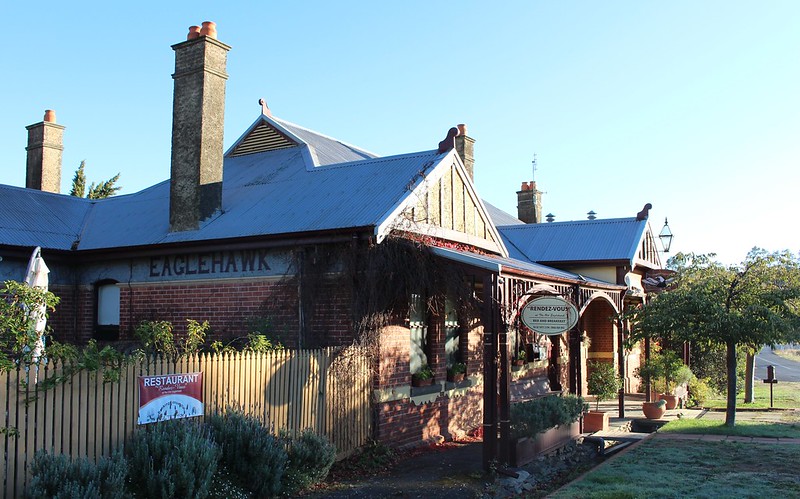 A small collection of engines in the station yard. 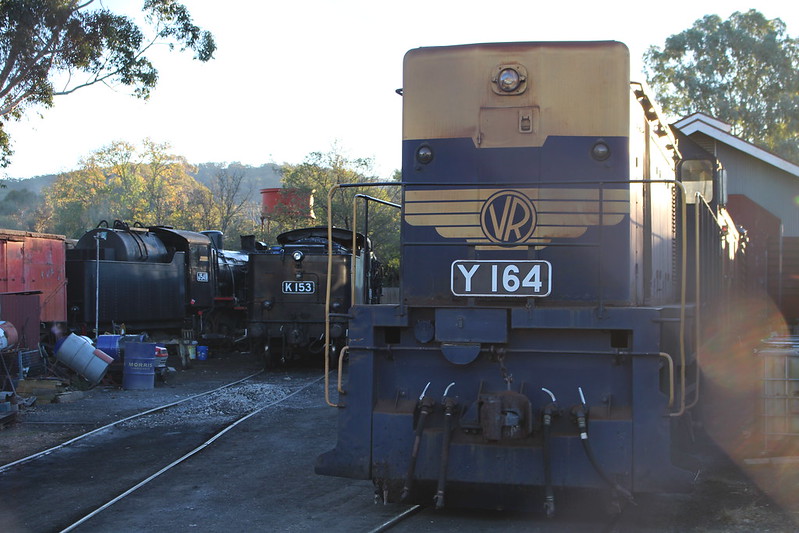 They seem to also have a relative of Thomas here. 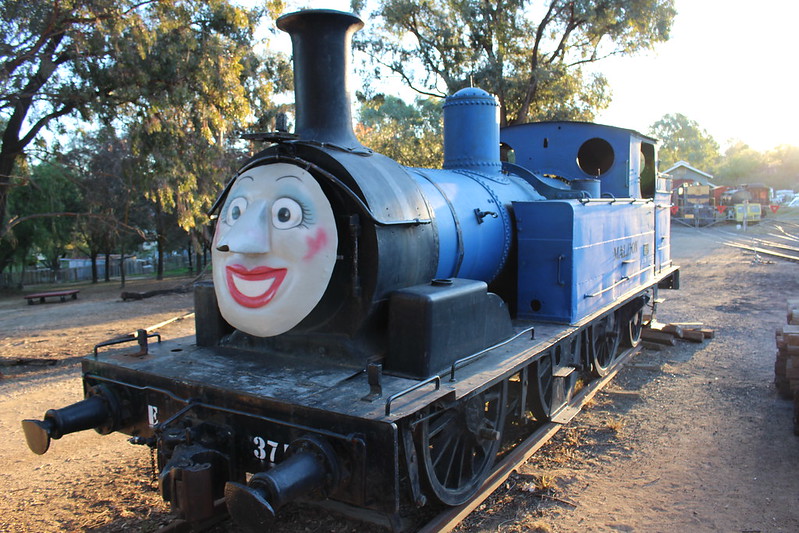 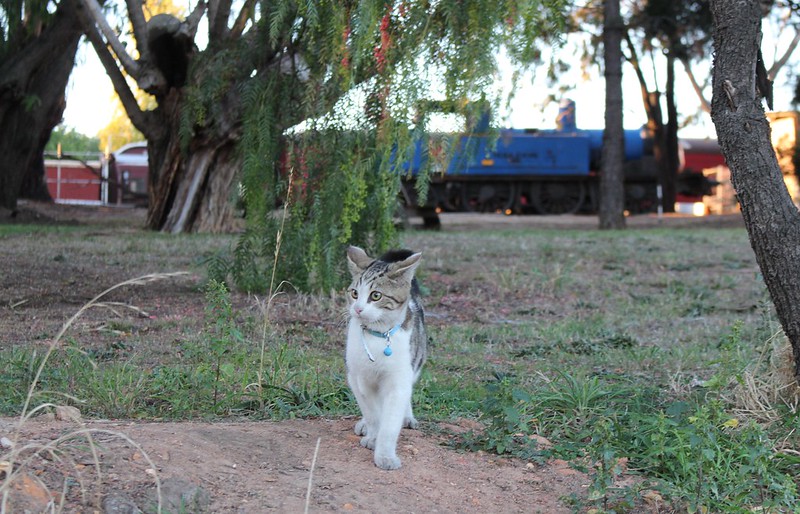 Maldon Main street. It was after 5pm, and the crowds had vanished. 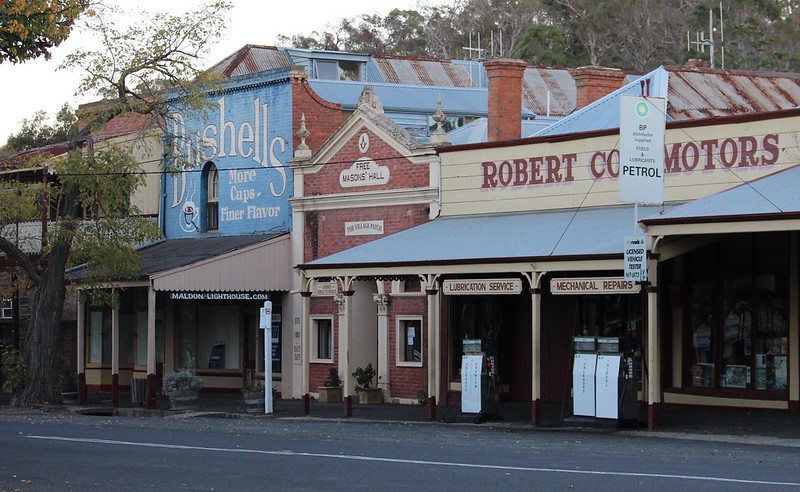 They have a heritage post box… and heritage rubbish bins. I remember when style was everywhere when I was a kid, but most have vanished now. 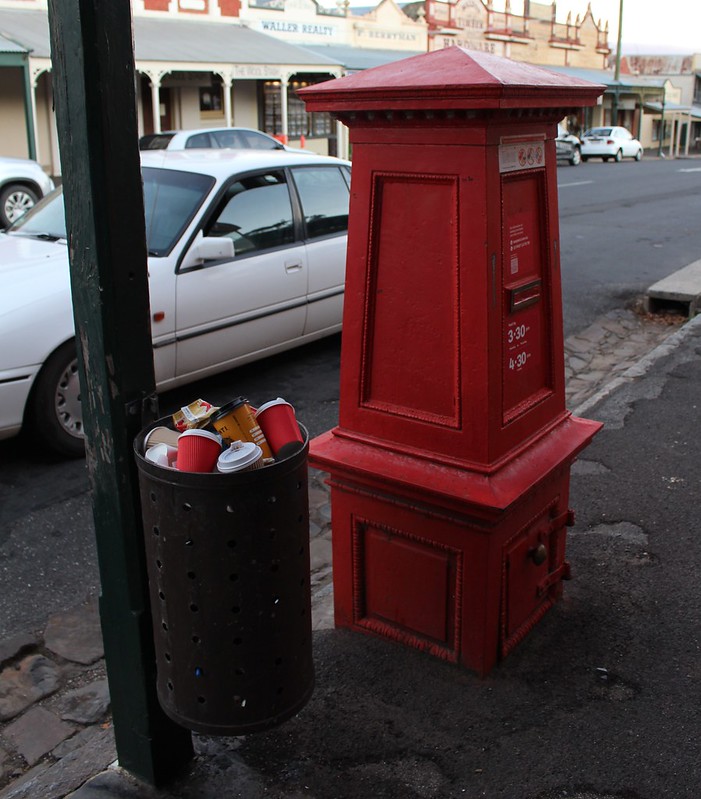 Rego Brand self-raising flour. (Was this a prominent brand? I couldn’t find anything on Google, though apparently they also made cordial.) 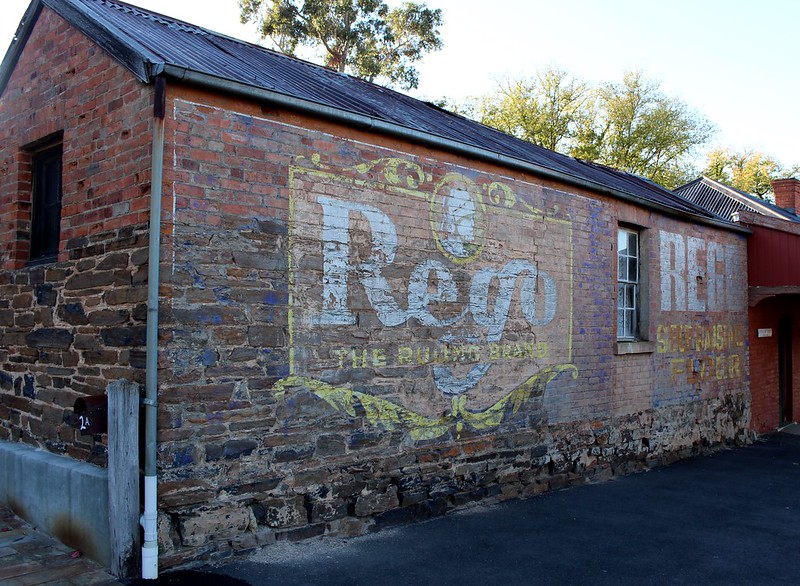 The Anglican church. Note the mining and mobile phone towers on the mountain behind. 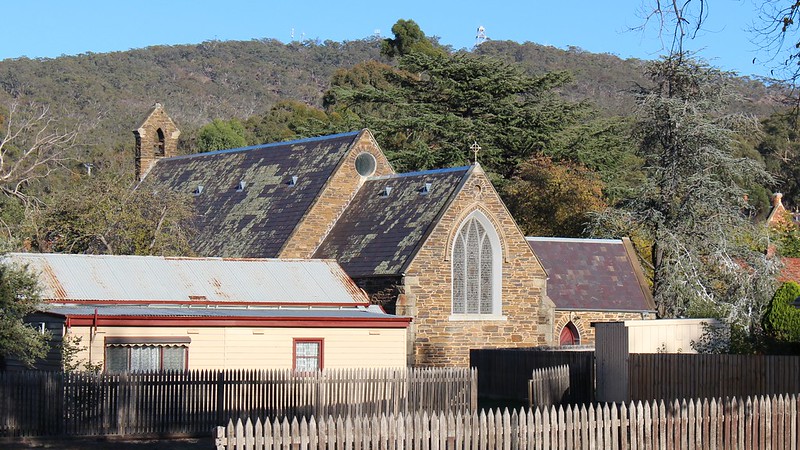 Dinner was a three-course taste-fest. I had cheese fondant, then duck, then a chocolate souffle. I’m not normally one for photographing my meals, but as you can see, I enjoyed it thoroughly. 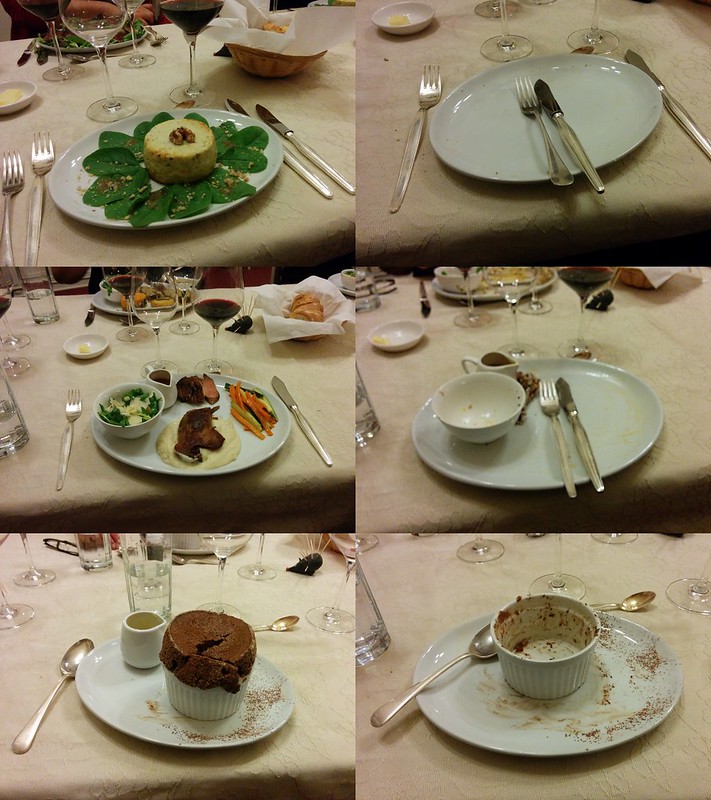 (Breakfast the next morning — croissants, muesli, egg and salmon on brioche — was great too, resulting in a similarly clean plate.)

I had to get back to Melbourne, which meant we didn’t get to ride the steam train, but during a morning walk before breakfast we spotted it getting ready for its day’s duties. 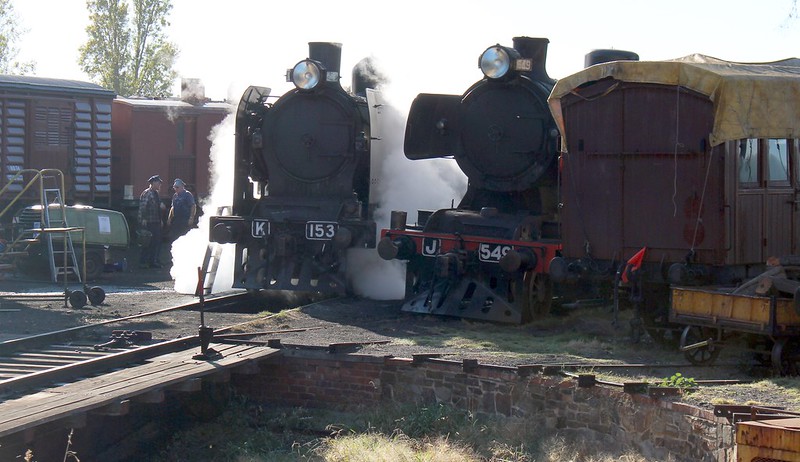 These towns — Maldon, Daylesford and Trentham — were all once connected by regular passenger rail services. (Maldon had passenger trains from 1884 to 1941. Trentham and Daylesford had passenger services 1880 to 1978 — I remember as a kid going to Daylesford by train; it must have been shortly before services ceased. Regular train with old wooden carriages to Woodend, and a rail motor from there.)

All three towns are getting very busy on the weekends thanks to tourism. In fact some of our group went back to Melbourne the way we’d come, and found bumper-to-bumper traffic around Daylesford. Evidently the three coaches per day on weekends (two from Woodend, one from Ballarat) don’t cut it.

Even on weekdays there are only three coaches from Daylesford via Woodend/Castlemaine, and you can’t reach Melbourne before 9:27am. Chatter among the locals is that while some hardy souls commute to Melbourne from this area, most moving to the area with this in mind live in the towns along the (main line) railway line. Those in the other towns tend to drive to a station — hardly surprising.

Anyway, it’s a nice part of the world. I don’t think I’d fancy that kind of commute every day, but it’s good fun to visit.

5 replies on “A day in Maldon”

A search of Trove suggests that the “Rego” brand was a house brand owned by Wholesalers Ltd. This company were wholesale grocers in Melbourne – they supplied groceries to small independent grocers across Victoria (and King Island).

In 1934 the Rego brand was described as ‘well known’ in the list of companies supporting an illuminated van. (The illuminated van seemed to be an early ‘buy Australian’ project that toured regional Victoria spruiking Victorian made products and gathering the crowds by showing movies. Some commercial – Charlie Chaplin & Mickey Mouse – and others of factories! See http://nla.gov.au/nla.news-article64285848 for a typical report.)

However, I’ve only found a small number of ads for Rego self raising flour in 1936/7.

There is a letterbox of the same design near the corner of Fletcher St and Pascoe Vale rd in Essendon. The box is actually on Fletcher st. It doesn’t have any times of pickup etc on it and for a long time I wondered if was a ‘working’ letterbox, but I have seen the van making pickups, so I guess it still is.

That’s what I call solar panels!

There is also a once-daily commuter bus linking Hepburn Springs & Daylesford to Ballan where you can hop the train.

With the early start, you can be in Melbourne at 8am and it’s about 15-20 mins quicker than going via Woodend.

I took our family on a VIC road trip the other week and one of the highlights was taking the Castlemaine Maldon steam. Reminded us a lot of the Steamranger in Adelaide, my daughters loved every bit of it.