I think everyone accepts that public transport is worthwhile, but not perfect. The Age today highlights rail capacity problems. The source document is a presentation from PTV, and page 5 summarises the bottlenecks: 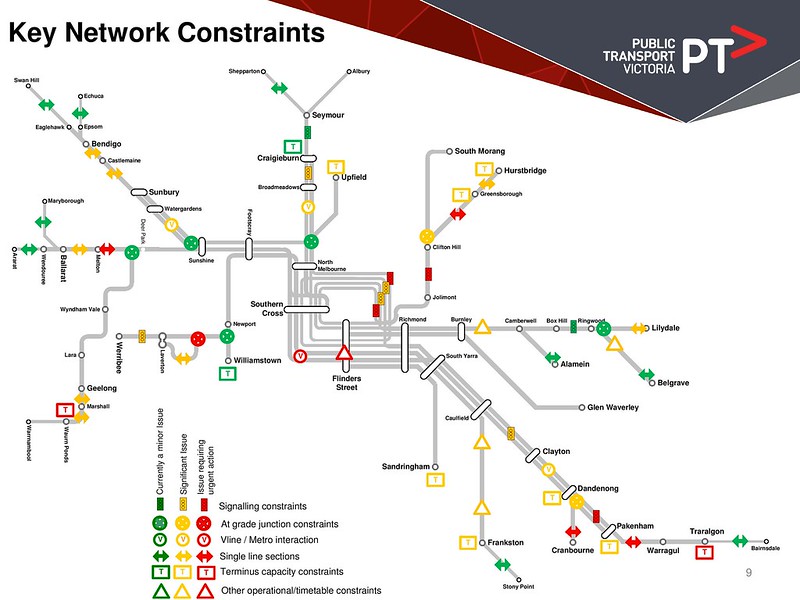 So, change is needed on the public transport network.

But because there aren’t unlimited resources, it’s almost inevitable that improving the network means that even for the best changes, a few people will be disadvantaged. The key is to ensure that the benefits vastly outweigh the disadvantages, and that those who are disadvantaged are helped to transition to the new way of doing things.

By unlimited resources, I don’t just mean money. Money can buy you extra vehicles, drivers and so on, but in some cases it’s just impractical and illogical.

When the City Loop opened, it meant longer trips for many of those travelling to and from Flinders Street and Spencer Street/Southern Cross. But this was heavily outweighed by the boost to pedestrian capacity in the stations, the improvements to platform throughput (one reason it works the way it does was so peak hour trains could run direct to/from inner-city stabling, though most of that no longer exists), relieving CBD trams, and feeding more people into the previously distant north and eastern ends of the CBD.

Grade separations have occurred at some stations in the past few years. Laburnum, Springvale, Mitcham and others. It causes lots of disruption during construction, and the level street access into stations is lost (in favour of stairs, ramps, lifts, escalators). But it boosts safety, rail capacity (you can run more trains without impacting road traffic), cuts delays to buses, cyclists, pedestrians and motorists.

Over time, some lines have been removed from the City Loop. Werribee, Williamstown, Sandringham trains all run direct on weekdays. But doing this has enabled more trains on these and other lines than would have otherwise been possible. And the growth has continued, so it’s not like it has inconvenienced people so much that patronage has dropped (though interchange could be better).

Re-routing of buses to form the Smartbus services. To help the frequent Smartbus routes run more direct routes, some had to be altered. For instance the Warrigal Road (903) service got moved out of some side streets, and a (less frequent) local route, the 766, created to fill the gap. Similar changes happened elsewhere. Smartbus patronage has continued to grow.

More recently, when Regional Rail Link opened, some passengers wanting Werribee and North Melbourne got bypassed, as V/Line trains no longer stop there. And yet there’s been little discussion of that since — people are adjusting. Geelong to Werribee people have a connecting bus that meets every train at Wyndham Vale. The two new stations have got lots of users. And the boost to Geelong line capacity is a clear benefit.

(There are some problems on the Ballarat line, largely due to train lengths rather than the changed operations and the timetable specifically. This is being slowly fixed as new carriages come into service.) 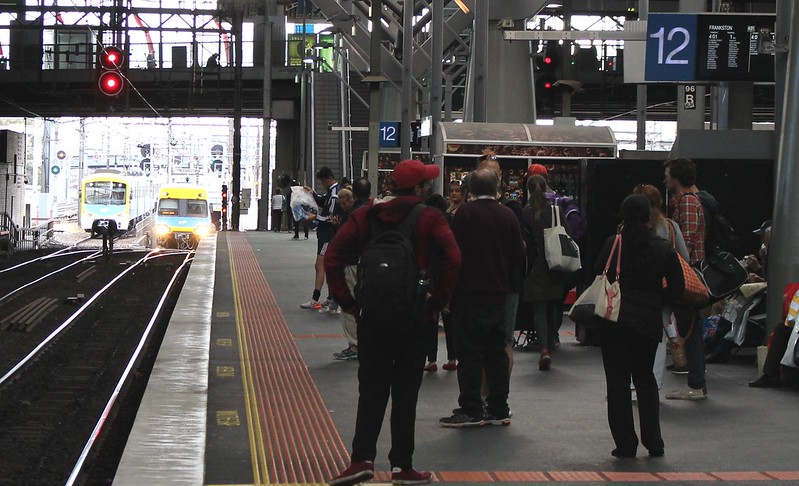 I’m not saying changes should all be revenue-neutral. More funding is needed to increase services and infrastructure, but the reality is that sometimes compromises have to be made. (And nor should there be a lack of consultation.)

In all the above examples, any disadvantages have been heavily outweighed by the advantages.

Even the lauded metro rail tunnel isn’t perfect. The Dandenong and Sunbury lines will no longer serve North Melbourne, Southern Cross, Parliament and Richmond, for instance. But it brings numerous other benefits.

If the decision-makers get so scared about the disadvantages that they can’t do anything, then we all suffer. The system stagnates. As the city grows, it can’t handle the demand for more capacity and different routes.

Right now there are proposals for trams, trains and buses which have been delayed, apparently due to these concerns.

Perhaps those proposals aren’t perfect. Perhaps they can be tweaked to minimise impacts, or can go in to coincide with other upgrades.

But the network isn’t perfect, and change does need to happen, and it can’t wait for ever.

You might need to break some eggs to make that omelette, but don’t shy away from making the omelette. The trick is to make it the best omelette possible.

The Transdev changes on hold is understandable. It’s not just less busy routes they wanting take buses from but also some busy routes were also to loses buses! While a less busy area e.g warrandyte was to get more buses.

Well said. I guess compulsory acquisition of land/property is another example where the greater public benefit outweighs the (substantial) inconvenience of a relative few.

I was surprised to read that each loop can handle 22 trains per hour. Does this ever happen? That’s one train every……….well I don’t have do the arithmetic for something you already know. Say every three minutes. To the uneducated, I would have thought signalling would be the easiest thing to fix.

@Andrew, when I looked at it earlier this year, three of the Loop tunnels had 20 or more trains per hour. Clifton Hill has 15.

I’m surprised that the Clifton Hill group has 3 of the most serious type of constraints, but nothing at all has been even proposed or proposed to be planned to fix it. The high-capacity signalling trial would’ve been a good fit for the group, so it is strange it was passed over for Sandringham. Hopefully works will be undertaken alongside the Mernda extension, or there could be some serious problems very soon.

@FelineCyclist – Metro would involve Sunbury services bypassing North Melb. Above ground transport connections between Macauley/North Melb/Arden must be seriously considered as part of planning for Metro. But the Newport lines, as well as Craigieburn and Upfield services would all still operate via North Melb, so it would still play a significant interchange role.

@Campbell I believe the reason the Sandringham Line was chosen for the new Signalling Trial was that it’s the shortest and easiest Line to test the new infrastructure on. A roll out on the Clifton Hill group would require re-wiring in the City Loop for instance, where as at the moment, Sandringham Trains don’t run on a weekday through the City Loop.

I think more emphasis on untangling the Flinders Street Viaduct and the City Loop Tunnels over the next 10 years would be a good start to unlock capacity during construction of the Metro Tunnel. Although it would inconvenience some, as not all trains stop at every single city loop station, it would allow the system become de-centralised, with operating hubs/bases located outside the city fringe where at the moment we have the space and cheap land to build large depots with proper facilities able to accommodate the 9/10 car trains.

I also think it’s a shame that Labor has decided to scrap “stage 2” of the Metro tunnel, by providing a full extra double track pair all the way out to caulfield. I think this gets overlooked, especially now that no station will be built at South Yarra which I think is an odd choice (I understand buildings would need to be demolished etc.), but looking at London, when they build new tube stations, they don’t always dig a big pit cut and cover style for their deep level stations, and so I don’t think the disruption would be the 100+ properties claimed either.

Sorry to sound like a cracked record, but I still don’t understand why people are so uncritical about the ENORMOUS cost of the Metro Rail Tunnel, considering that there are so many other worthy projects that also need funding, as this map shows.

I won’t repeat my long comments on Daniel’s post of 25 August (‘Metro Rail Tunnel ads’), but to summarise:

Northern-Caulfield Loop Connection (as described in PTV’s 2012 Network Development Plan, p.123-5): creates an extra track pair from the west by avoiding the present choke-point where the Craigieburn and Sunbury lines merge to the Northern Loop. Trains run from Craigieburn to Frankston via Melbourne Central. Cost say $3 billion (my guess based on comparing the scope of work with the MRT);

Arden, Parkville, Domain—love them, but the cost! If you had $7 billion (the difference between the two options) to spend on Melbourne public transport infrastructure without constraints, would you really want to blow it all on building just three new inner city stations—two in areas already well served by tram [note 1] and the third just 500 metres from North Melbourne station?

That’s effectively what you’re doing if you prefer the more expensive option for the sake of the three new stations.

Are you sure there’s no better way to spend that $7 billion? It’s lovely thinking about the benefits of our favoured project, but in a world of limited budgets we also need to think about costs and alternatives to ensure we get the best value for money for the overall system. The many defects and inefficiencies of the broader rail network shown on PTV’s map just emphasises that.

Note 1. Yes of course there are capacity problems on this corridor, but there are a number of projects you could do to improve things for a tiny fraction of the cost of the MRT—see my comments on the earlier post.

Eventually we’re probably going to need multiple solutions. I wouldn’t be surprised if, by 2050, we’re talking about a third pair of tracks through Parkville station.

This is an excerpt from my list of small, effective projects:

Trams and buses can be improved with little trade-off as many of the circuitous and deviated routes of buses being eliminated or changed would benefit many people at very little cost.
Increasing bus frequencies in busy areas (an example would be Tooronga Rd Malvern or Hoddle St in Richmond) will attract more passengers which make up for the extra cost in providing those services as well as the extra capacity freed up from removing or changing the circuitous routes.
Instead the government is considering widening the Punt Rd and upgrading the intersections on Hoddle St for more cars at much greater cost and will only transfer traffic to other congested inner city areas.

In regards to the trams lack of signal priority and no extensions included in the last budgets is a lost opportunity. Many of the trams would stop at intersections with side streets with no cars traversing the intersection (an example I would see would see regularly would be the corner of Burwood Highway/Somers St in Burwood and Toorak and Highfield Rd in Camberwell.

It is time to realise that, what we need to have is a complete rail network in addition to what we have now.

Could that monorail network proposal be a solution?

Another solution is to just add more carriages to the trains.

STOP PRESS: What about this idea.

Rip the rails out and have moving walkways?

The idea is being looked at in London as shown below.

@Jim, no. As the replies on the forum point out, this hasn’t been tried (and certainly not successfully) anywhere in the world over distances of more than a couple of hundred metres. It is not “being looked at” in London – it’s one wacky idea that one design firm has floated, probably as a publicity stunt.

As with your mention of monorails, the problem is not technology.