Just on five years ago my dishwasher door spring broke. In that instance a secondary fault also affected the actual washing of dishes.

Now another door spring has broken. It hasn’t affected the washing – it’s just the door is heavy, and needs to be opened very carefully. 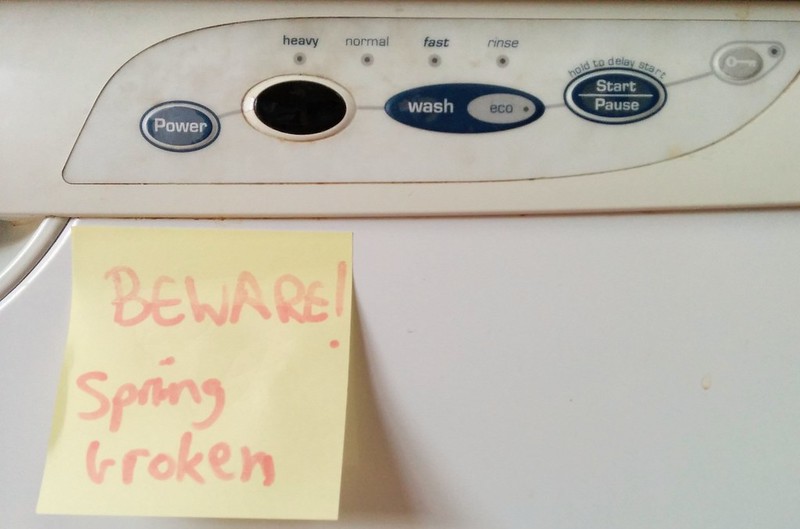 Repair from Fisher And Paykel is expected to cost $135 for a call-out fee, excluding parts. I actually have the second spring from the pack from last time. I had a look at instructions on the internet to do it myself, and got through the first stage, but after that it looks too hard; I’d risk rendering the machine inoperable.

Given this unit is probably at least 15 years old (I moved in 10 years ago, and the kitchen renovation looks to have been a few years before that, though the house also had some renovation in 1995), I’m wondering what the typical life of a dish washer typically would be.

$135 to repair (if I don’t want a heavy door), or perhaps $900ish for a decent, brand new unit? (I’ve had good luck with Bosch products, and they have several models in that range). Hmmm.

How hard is it to install a dishwasher, anyway? Just connect up power and a couple of pipes? Sounds like it may be worth paying a little extra for installation.

On the other hand, the current one works fine, and it would seem to be a waste to scrap it in favour of a new one.

11 replies on “How long does a dishwasher last?”

A friend’s Miele dishwasher has been going strong with no issues ever since the house was built in the late 80s (over 25 years). Pretty amazing!

Rae put ours in. The tradie she called to do it said there was no need for him to come out. Apparently it was as simple as plugging it in and connecting the pipe.

I have a Miele dishwasher that I really like. I can recommend this brand if you need a new machine. Bosch is very good too but Miele has better racks that allow for more flexible loading. Compare the two of them in a store and you will see what I mean.

Mine is freestanding with just a water supply hose, drain hose and a plug to connect. Replacing a spring shouldn’t be too hard for a handy person and if you pull the machine out and have a look at the broken spring and the replacment spring it should be straightforward how to fix it. Sometimes diagrams make thinks look more complicated than they really are.

I saved about $900 on my dishwasher by buying it at Miele’s factory seconds store on Ferntree Gulley Rd. in Knox. I recommend this store to have a really nice machine for not that much more money than a basic machine bought full price. Mine was an ex store display model in perfect condition. If you do decide to replace your machine you most likely will have no trouble installing it yourself.

Our dishwasher came with our building in 1998. We arrived here in about 2001. After a couple of years the dishwasher flooded the floor. Luckily we were home. We had it fixed. It flood the floor again, this time partly wetting the carpet. Again, lucky we were home. We never put the dishwasher now when we are not home to see it through to its last water fill. But this is a new dishwasher, bought about 2005. Apart from a failed power supply and a dislodged recirculating pipe, it has been fine for ten years. Our current one, the 2005 unit is the quietest we have ever had and that may be an influencing factor in the decision to buy a new one. They are so easy to install in an existing cavity with the same plumbing, that I don’t even know that that there is extra charged when it is delivered. While you may have space to store the old one for hard rubbish collection, we did not and so getting rid of the old one was a consideration.

Just go out and buy a new one. You’ll love it.

PS, our now old but latest one uses so little water compared to the previous five dishwashers we have owned.

If our experience is any guide, about 15 years each for the “normal” ones (not counting Miele, Asko, etc.) We have been in our house for 32 years and we are about 2 years into the third dishwasher. This time we paid a bit extra and got an Asko. So far it has performed faultlessly.

15 years service from F&P sounds about right. Have lived in houses with Miele, Smeg and Dishlex dishwashers. Of those brands, the Miele is the quietest, most reliable at washing, and always dries properly. The others were rubbish – noisy, didn’t wash properly, left dishes wet at the end of cycle. There’s obviously a price difference, but if it means reliable service for 20+ years, versus troublesome service for 15, I’d be investing more upfront. ‘Choice’ also rates Asko and Bosch highly.

Also worth considering the energy use of a new dishwasher compared to your old one. Energy use has cone down so rapidly over the last decade that for many appliances such as fridges and aircon the electricity savings alone make a new one worthwhile (+ reduced environmental impact!) Not sure about dishwashers but definitely worth keeping in mind.

As Tony said above, I installed ours. It’s a doddle. If you want me to give you a hand, we can pop around on the weekend it is delivered and give you a hand.

It’s good that F&P has lasted so long. Vote for Miele. We have had a couple and they’re been very good

Mine is ten years old this month, as it happens, and works just fine although I have had to repair it several times.

Rodents chewing water supply pipe
Rodents eating wiring
Clips holding top shelf to drawer rails broken, fixed with electrical tape which I expected to last a month and has so far lasted 4 years.
Clogging of holes on the spinning arm, fixed by poking thin wires into them.
Oil build-up clogging the fine strainer, fixed by removing about once a month and cleaning, the issue with this is that the actual problem was non-obvious.
Using Woolies own-brand detergent – a 100% failure of a product, the only totally unsatisfactory Woolies own-brand product I have used.

The current emerging problem is the door latch is becoming faulty, which has twice caused it to stop half way through.

When I bought it, the salesman at Clive Peeters told me it was the last “clockwork” model in the store, so when the EMP wrecks all your electronic controls, I should be OK.

As long as you replace like-for-like (for example freestanding with freestanding) they are literally slide the old one out, unplug the power, turn off your water and disconnect your water-in, disconnect waste-out. Plug the new dishwasher into the power, connect water-in pipe and water-out pipe and slide it into the cavity. The hardest thing about it all is getting rid of the old dishwasher! Council hard rubbish collection took care of it but I had to remove the door before putting out the front for collection. The latest dishwashers are a lot more energy and water efficient and are much quieter. You might be able to pay a bit more and get the new one installed and the old one taken away!