I’m all for al fresco dining. It can be lovely sitting in the sun on the street enjoying food and drink — and will be doubly so once the smoking ban comes in, in 2017. And it helps make our streets more interesting and interactive.

But getting off a bus in Brighton the other day, I noticed this, which just seemed excessive. 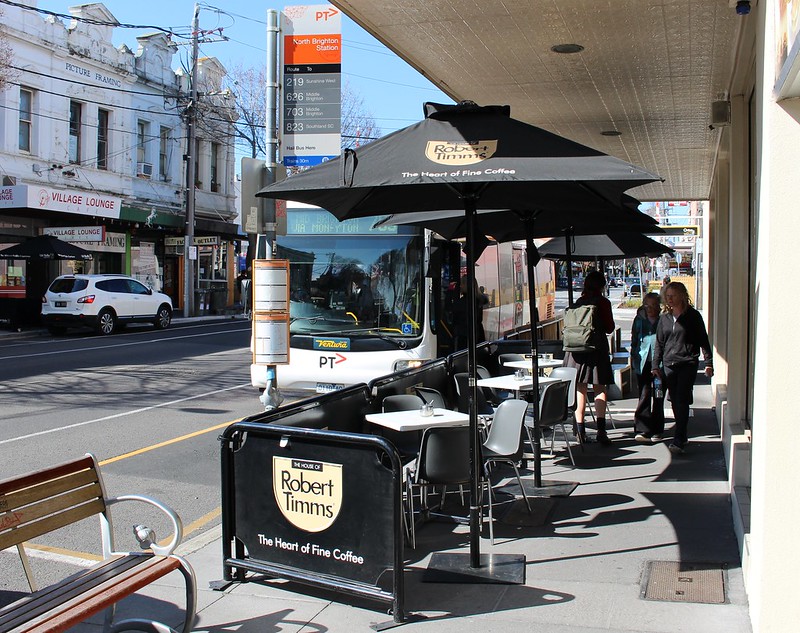 As an able-bodied person, I was able to get off the bus — but what would someone with a pram or wheelchair do?

There was only a small gap (where the tactiles were) — the bus driver had lined up his front door with this, but the back door faced a barrier. 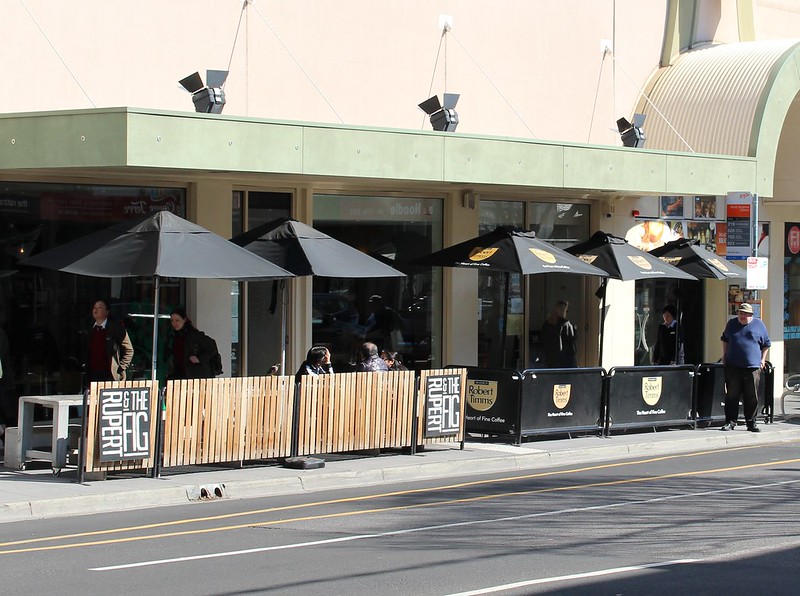 It seemed logical to ask the local council, City Of Bayside, what was going on, as in most areas there are guidelines as to where cafe and shop furniture can be placed.

The bus company got into the conversation pretty quickly, but more importantly, the council replied that they were on the case:

@VenturaBus @danielbowen @Transit_Hub thanks for the heads up. We did not give them a permit to do this. Our team is on its way down now.

This is not a theoretical problem. Route 703, and other local bus routes, often have passengers in wheelchairs on board, and others who require some space on the kerb to get on and off.

“Kneeling” buses can still do their thing, but small gaps don’t allow space for ramps to be deployed.

These cafe owners should have known better. Hopefully space can be allocated more sensibly. By all means allow kerbside trading, but keep the bus stop clear.

There are probably more cases like this. I’d encourage you to have a word with your local council if you’re concerned or affected.

@danielbowen @BaysideCouncil Google Street View shows they have done this without a permit since at least Nov 2007!! pic.twitter.com/k8yC97vUFh

Update 1pm: The bus stop guidelines provided by VicRoads appear to mandate a 2 metre clearance out from the kerb in the area of the front and rear doors, as well as the clear area adjacent to the front door that is 2 metres wide (eg 2 x 2 metres in this area).

Also, my sister zipped past this morning and tells me nothing’s changed yet.

Update 6:45pm: Not quite the outcome I’d hoped for; Bayside Council has got back to me with this response (via Twitter, but I’ll string it together so it’s more readable):

We got our wires crossed and gave you the wrong information. Both cafés have permits that predate the bus stop being relocated here. We are working with traders in Bay Street to work out a solution which could include moving the bus stop.

I should have known it couldn’t be as easy as getting the street furniture removed. I suppose when the bus stop moved there (some years ago), nobody thought to check the implications of the location against the kerbside trading that was already in place.

Issues aside, the current location of the stop is pretty good — being very close to the railway station, making it good for train/bus interchange. It would be problematic if it were to be moved further away from the station.

It’s a shame it takes a past president of the PTUA to get some action.
Dozens of Bayside council staff would have driven past or walked past that bus stop over the past few weeks and seen the situation and didn’t report it (no doubt because it wasn’t on their performance plan).
Good on you for keeping the ba$tards honest!

Seems like this could be resolved with some lower-key design:
1- Move the tables and chairs so that they’re right next to the building wall
2- Lose the fence – seems like all it does is advertising (or maybe its required for liquor regs?)
This would easily allow enough through space on the sidewalk, which would also serve the buses when needed

I’m imagining the little old ladies with jeeps/shopping trolleys who regularly catch my local bus. They’d find it difficult to get on or off at a stop like this. Good on you in raising the issue. Sure there’s no solution yet, but hopefully the stop will be moved a couple doors up where there is more space to get on or alight from the bus

@DB, I think it’s atypical to have tables on the building wall as vision impaired users may use the wall as a guide (safer than using the gutter/ moving lane…)

I also don’t see why the bus stop would be moved; the business has a net area than excludes the bus stop, they’re just taking a freebie using public land from what the Council’s response seems to be.

Just noticed the blog update – so maybe the bus stop should be moved. Bit of a coordination fail between PTV and the Council then about permitted existing uses and bus stop requirements for the same piece of footpath…