If you haven’t heard about Friday’s Australian Border Force debacle in Melbourne, here’s the background: Timeline: How Operation Fortitude unravelled

It started with their Friday morning statement, which said, among other things:

“ABF officers will be positioned at various locations around the CBD speaking with any individual we cross paths with.”

The media dutifully reported it. The prospect of officers stopping people on the street and demanding proof of immigration status was, of course, bound to get a negative reaction.

Cue a backpedal from ABF:

“The Australian Border Force (ABF) will not be ‘stopping people at random’ in Melbourne to ‘check people’s papers’ as reported in media this morning regarding Operation Fortitude.”

As pretty much reported in your own statement, actually.

BORDER FORCE AGENT: Laos? Where tf is that ME: It's next to Vietnam BFA: Ohh I love that FOWE M: It's pronounced "Phở" BFA: HANDS IN THE AIR

The original release also noted a media launch at 2pm at Flinders Street station, and with a rapidly rising level of outrage over what it all meant, that was enough to get a protest.

As it was more-or-less lunchtime, I wandered down. I came through the station, and saw an ABF officer, a Victoria Police officer and a uniformed Metro employee in a huddle, looking furtively towards the protesting crowd nearby.

"No to racism, no to hate This is not a police state." (Note the sign back there.) pic.twitter.com/eNnos7taAN

I stood nearby and watched the protests for a while. It was not a huge crowd — media later estimated 300 — but they were doing plenty of chanting. Given the type of protest, there were of course some with Socialist Alliance banners, but it didn’t appear that they were in the majority.

When I left, the protesters had moved into the intersection, and were blocking traffic. (Note the sign on St Paul’s Cathedral.) 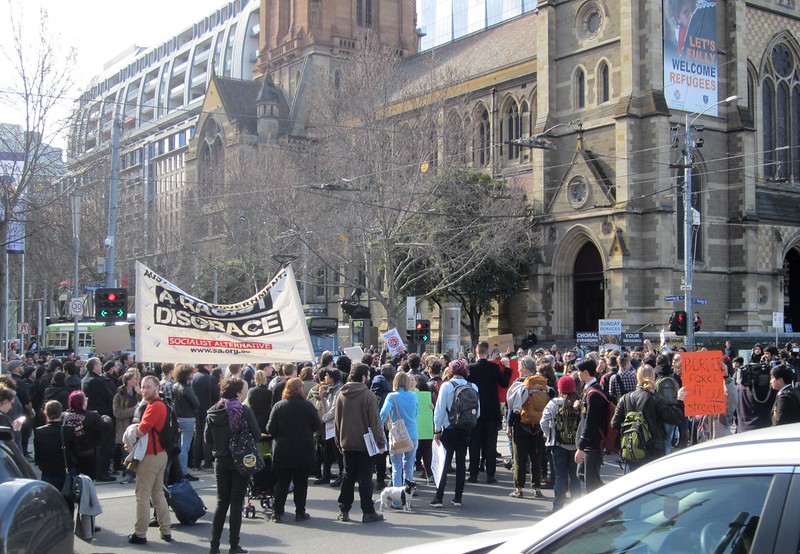 While I was there it was peaceful but noisy, and it was enough to get the official media event cancelled… but of course, having gathered protesters and media to the site, coverage was guaranteed.

So #BorderForce basically just arranged for heaps of journalists to cover a mass protest against them. Hmm. https://t.co/VzCbzo5TTz

Subsequently the Victorian Police Minister issued a press release, expressing something less than complete happiness at what had occurred.

Operation Fortitude was intended to be a standard police operation.

We fully support the decision by Victoria Police to cancel the operation after the unfortunate and inappropriate characterisation by the Australian Border Force today.

So in summary, a big friendly Melbourne welcome to Australian Border Force. pic.twitter.com/i6Tggtiy92

So now we’ve all heard of Border Force

It strikes me that if it was an exercise in brand recognition, then it was a resounding success… but really it’s all about politics, and in those terms, it was a disaster.

Even the name is overly political. The ABC explains that the ABF merged the frontline functions of Customs and Immigration.

But the name isn’t as utilitarian as Customs or Immigration. Australian Border Force is a macho, action-man name evidently designed, along with current immigration policies, to make the government look tough.

Remember, the launch was botched: at the announcement in July 2014, they managed to prominently use an image of a faceless authoritarian tough guy that was never intended to be used as a standalone logo, leading to numerous parodies and the graphic designer to remark “It was never meant to be a logo; it was just a small icon. It’s been overemphasised and so I can understand the reaction.”

As for Friday’s cancelled operation, why would anybody think sending these guys in to piggyback on a Victoria Police operation was a good idea in the central business district of Australia’s most left-wing capital city, and one of its most multi-cultural?

I’m betting they won’t try that again in a hurry.

On my short drive home from work on the morning, my phone went mental with buzzing when text message after message arrived. Something’s up, I thought and so it was. Anyway, off to watch a WW II movie now, where someone is stopped in the street and the only word said to them is ‘papers’.

PPS Bad me. I thought Border Control was such a convenient all encompassing term for immigration, customs, quarantine and security. I should have known.

I never heard of ABF before. So yeah it was a resounding success in raising brand awareness.

But I am also aware that the Tories want an unlimited number of 457 visa workers even as the unemployment rate is at a 10 year high.

So it was a political stunt.

The part of the Victoria Police statement, which bothered me the most, was “We were advised it would target anti-social behaviour and commuters to ensure people got home safely. ”

This sort of lack of basic English semantic understanding is now very common in Government pronouncements.

@enno, bear in mind the word “commuter” has now been appropriated to mean any public transport passenger.

While of course agreeing that this operation was ham-fisted, I suspect that at least some of those who are making political capital out of it would not have the same objections to ABF being involved in “raids” to check the visas of fruit-pickers and similar workers (as has occurred in the past).

If the police said they were targetting anti-social behaviour, and fare evaders, then that would be OK.