Yesterday’s collision between a police vehicle and a tram stop barrier has raised the issues of whether those barriers are a good design. 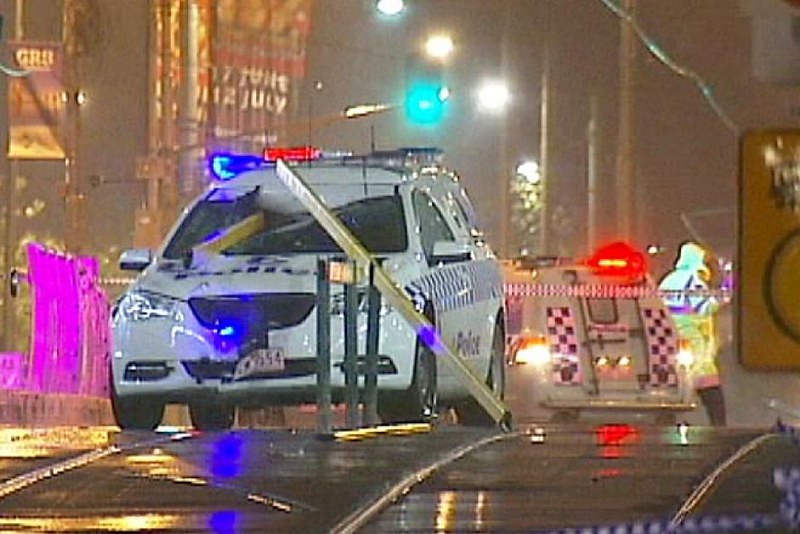 Thankfully the two policemen will recover.

The barriers are intended to stop pedestrians crossing the tracks at tram platform stops. It’s hardly surprising that people do this, given many of the stops are so long as to fill entire city blocks, and it is often the quickest way across.

At the Federation Square stop in question, time saving isn’t likely to be an issue because unlike the other stops on Swanston Street which are open, the two platforms are enclosed. Perhaps the fear is people will jump the tracks due to congestion on the platforms — in which case the logical thing to do is to widen them. Given little traffic congestion southbound at this point, widening and moving them across to take one southbound traffic lane would make sense. 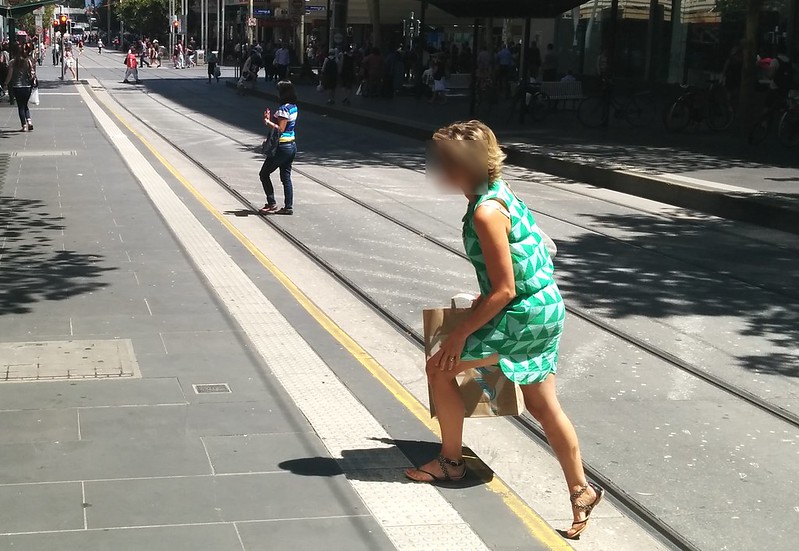 Certainly crossing the tracks could potentially be dangerous, particularly on Swanston Street with a large volume of trams. But are there statistics supporting the use of barriers? And at quieter stops, if people pay attention, is it really a huge issue?

As I understand it, crossing the platforms is deemed to be an equivalent offence to doing so at a railway station, which doesn’t make sense given trams are slower, can stop faster, streets have a smooth surface rather than ballast, and of course the distance down from the platform is much smaller.

Another issue with the barriers is that emergency vehicles using the tram tracks (which they often do) are unable to move around stopped trams. Here’s an instance of an ambulance going to a call, stuck behind a tram. 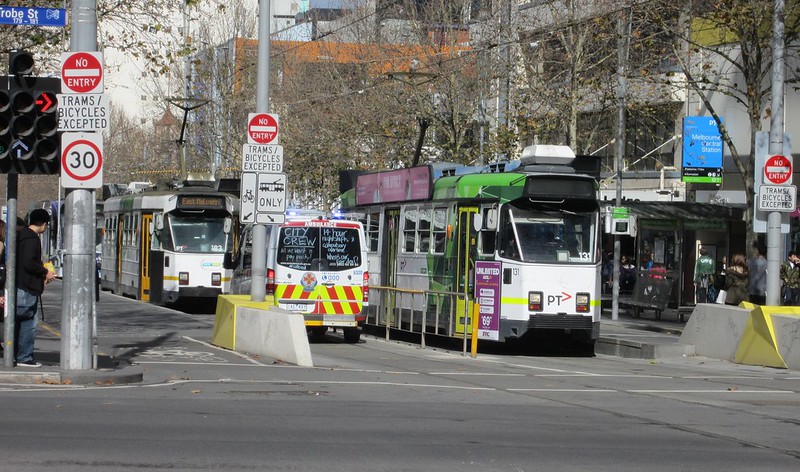 Platform stops are important to help provide an accessible and efficient tram service. But perhaps the wisdom of block-long stops in busy urban areas, and the use of barriers in particular, needs to be considered.

Plug: Get my transport-related posts by email (via MailChimp)

An email each morning — if there’s a new transport-related blog post.

17 replies on “Tram stop barriers – are they good design?”

Very timely post, thanks.
I wonder if ONE bad incident involving a police car with a barrier (what was the driver doing?) should spark a review.
I work opposite a tram super stop without pedestrian barrier. A lot of people race across the tram tracks rather than use the nearby pedestrian crossing. My God, people take their life in their hands as they dodge trams and moving traffic as well as negotiate two steep steps (one down to the tracks, the other up). I think barriers, on the whole, save lives and prevent a lot more accidents than they might potentially facilitate.

Those barriers are clearly outside the design guidelines for roadside barriers. Using long, continuous horizontal members in a barrier that can be struck end-on is just not done in road design. Yarra Trams, however, seems to have decided to do it. It wouldn’t be allowed by VicRoads but I suspect VicRoads either doesn’t have a say in tram stop design or has decided to ignore industry best practice.

The prohibition on crossing between two platforms at a tram stop crept into the regs in 2005 with little fanfare or justification. Despite being written as an extension of the long-standing rule against crossing in the pit between railway platforms, the two are in no way alike.

Crossing the road at will between two kerbs is routine in Australia and most other countries. Unlike the USA, we never made it a blanket offence to cross the road at a location without a marked crossing (a rule apparently drafted by the car industry in the 1920s). Instead we prescribe general rules for safe crossing: at right angles to the kerb, not in the path of approaching vehicles and not where there’s a crossing within 20 metres.

Many tram stop platforms now are over 40 metres long. If we’re to import this kind of blanket prohibition (which is virtually impossible to police) it should be backed up with evidence that enacting such rules actually does more to prevent serious injuries than relying on existing rules.

Be very interesting topic for chatter this week. Thursday is ARE train buff meeting, and Friday is Tallarook train watchers.

I wish to express get well wishes to the police officer who was injured in the accident.

I don’t understand why the barrier is being blamed. It didn’t jump out at the police car. It seems obvious that the driver, for whatever reason, wasn’t paying attention. That’s why we see so many accidents at tram safety zones in Kensington and elsewhere.
Life’s hard. But it’s harder when you’re stupid.

I hope the police officers involved have a speedy recovery. However, I agree that if the barriers are removed, it shouldn’t be due to the difficulties of emergency vehicles. In your ambulance photo above Daniel, if the barrier was not present, I highly doubt the ambulance could’ve squeezed between the north and southbound tram in order to overtake. And even if it could, it’d be very, very dangerous, as it’d be hard to see oncoming trams and there is nowhere for the trams (or ambulance) to go to avoid a collision.

Furthermore, in this unfortunate case with the police car, I really do question what the police car was doing on the tracks in between the Federation Square tram stop at 2am in the morning. There are two traffic lanes on either side that would’ve presumably been empty in the dead of night, so it’s not like the tram tracks was the only option. Even if it was daytime, so many trams use that stop, that I think it’d still be faster to use the outside lane then the tracks.

@Tony, “Many tram stop platforms now are over 40 metres long.” — the longest trams are now 33 metres, and the platform stops are at least 35 or so metres to cope with them. But many are actually long enough for 2+ trams that length, making them often more like 70+ metres long. The Swanston Street stops of course are even longer, going for almost the entire half-block.

@Anthony Y, inanimate objects don’t leap out and hit cars, but poorly designed ones may result in more accidents, and there’s always scope to look at improving designs to help reduce problems.

@James, that’s true the ambulance can’t immediately overtake the waiting trams. But with the barrier there, it was stuck until the queue of trams had cleared the stop. At stops without barriers, they often at least have the option if there’s a gap and visibility is good – and tram drivers coming the other way tend to see approaching emergency vehicles and stop to leave a gap for them.

They are not really roadside barriers. The fences are in the middle of the tram stop, which could exclude them from the normal road protocols.

They safety issue I would ask is are flashing or safety lights operating at night indicting the tram stop and barriers. Which would improve safety for passengers and drivers.

No, nothing excludes them from road environment design principles. They’re there, in the road reserve, and could get hit by anyone. There’s no excuse for them to have continuous horizontal members capable of spearing a vehicle. There are many pedestrian fencing products available which present no such risk and are used all over the place. It is not good enough to blame drivers when they collide with something, and it’s certainly no use. Wherever risk can be reduced, it must be, and in the case of pedestrian fencing it is no more expensive to just do it properly.

You are correct the fencing seems to be non-compliant with safety design. But you have misconstrued what I said. I am saying the flashing lights may have allowed the police to see the barrier if that was the issue. But techinically the barriers are in the middle of the tram stop not on the roadway. As emergency vehicles obviously drive on the tramway.

I have only seen the unfortunate images of the barrier going through the windscreen.

Did that impalement of the windscreen happen during or after the crash ?

There is more information in this article if people are interested. It also mentions ‘the barrier, fitted with reflectors, was removed during reconstruction works less than a fortnight ago’.

“Perhaps the fear is people will jump the tracks due to congestion on the platforms — in which case the logical thing to do is to widen them.”

My thought has been that the fear was of people crossing the tracks /between/ trams, popping out potentially just in front of an oncoming tram on the adjacent track. Where trams do not so frequently stack up at stops, the chances of people going /between/ trams are much less.

@Jacob, this is what the barrier normally looks like: Google Streetview

@John of Melbourne, I guess my point is that people are unlikely to cross the tracks for the sake of crossing the tracks, because it saves them no time – as the Fed Square stops are completely fenced-in, and ultimately you have to exit via the traffic lights — unlike the other stops along Swanston Street.

Daniel, I have to say I’m surprised you can’t see the need for these barriers to be installed at the busier platform stops. Even though trams “are slower” as you mention, they are still railed vehicles that have significantly longer stopping distances than non-railed vehicles. Have you spoken to any tram drivers about this? Do you have any idea of the fear that goes through them every time they go through stops such as Swanston/Collins St, Bourke St, RMIT tram stops, even at 15km/h, not knowing if someone is going to step out from a tram travelling in the opposing direction?
There are also many visitors that come to the city for a vacation or an extended stay. It’s common to see these people look, but in the wrong direction, because they are in the mindset of a right hand drive country. Granted many tram platform stops in overseas countries do not have centre barriers, but it could be argued that in those places the locals don’t have the “special” attitude that many Melbournians do toward trams (i.e. a total lack of respect for safety around the vehicle).
Issues around emergency vehicle access can be addressed by some changes to platform stop design (at certain stops) and also better training of both public transport and services staff. In actual fact, for safety, in Melbourne most stops (except the for quieter suburban type stops) should have centre safety fencing as a standard in the design.
Finally, the incident last year was a tragedy and was the result of the stop not being put back to its original state following the completion of track works in the days/weeks leading up to the incident.

[…] where required. (The current design at the northern end of Swanston Street doesn’t stop cars, but can delay ambulances when they get stuck behind […]