Before you read too much of this post, play the video and (assuming you haven’t seen it before), see how long it takes you to work out what it’s an ad for.

Gosh, isn’t it optimistic! And I’m finding it really catchy.

Even the bloke at the end seems pretty happy, perhaps with good reason.

That ad seems a bit long for television; perhaps it was in cinemas, or perhaps it was online only — though it seems there was a shorter version for TV.

These TV ads accompany it:

…and this in particular I like, as it manages to capture a key reason of why the product is so important:

Both the Washington DC ads above and the book show examples of rail authorities that are aware of the importance of promoting their new rail lines. 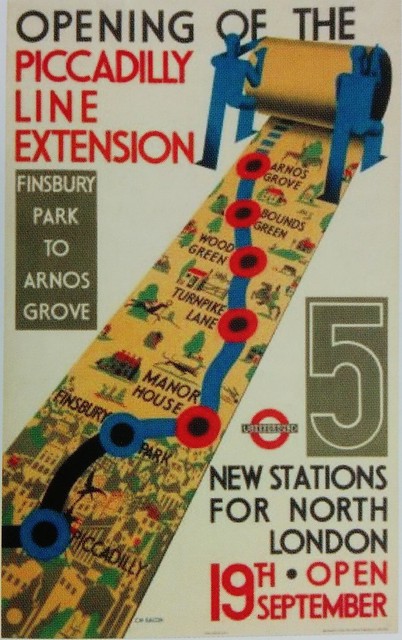 Today it’s a month until Regional Rail Link opens on 21st of June, and there’s been no promotion of it at all.

So far I’ve seen no posters, no ads, nothing online (the official project web site doesn’t even seem to indicate the precise date; it only says “June”), and recent media stories about it (not since the ones advising that the opening was delayed).

I’m told even the new rail map, which would have highlighted the new line to Metro users, has been delayed until later in the year. This is a real shame — it would have been a perfect way to promote the new stations to existing users, including those who might currently be driving from nearby suburbs to the overcrowded Werribee line.

Way to get people excited and interested in the first new major suburban rail line to open in 80 years!

But wait a minute, I hear you say, why does the rest of Melbourne need to know about this? I don’t live anywhere near Tarneit and Wyndham Vale; how will it help me?

As former Western Australian transport minister Alannah MacTiernan pointed out in a presentation in 2013, when the new Mandurah line opened in Perth, it actually resulted in patronage growth right across the Perth rail system.

My guess is it’s a mix of the benefits of the new line serving destinations previously difficult to reach, and the halo effect — oh, look at that, a new rail line just opened — it looks so modern — I haven’t caught a train in ages, but maybe I should take another look and see if my local trains are any good… oh, they’re more frequent than they used to be… I’ll give it a go.

In this short video about the creation of the Washington DC ads, they note (at about the 3 minute mark) that the campaign increased overall awareness of Metro, and helped contribute to very strong patronage on the new line when it opened last year.

Most of us don’t look as happy as the people in the first ad when riding trains.

But I think the “Good times are ahead” message resonates because it reminds us of something important — better public transport means better access to jobs and education and other opportunities — whether or not you can drive — and an option for getting out of the traffic. I can say with some certainty that my life is better thanks to good access to PT.

So too the Regional Rail Link will be of huge benefit to the residents of Wyndham Vale and Tarneit — and the frequency boost expected on the rest of the Geelong line and on the neighbouring lines thanks to freed up capacity will also help many others.

In Victoria, we seem to have an awful lot of trouble promoting the good things about public transport.

There’s certainly political promotion — this week I’ve received two sets of flyers about the forthcoming level crossing grade separations; at the station, AND in the mail… and let’s not forget ridiculous ads for non-existent infrastructure like last year’s promotions of the proposed airport line — designed not so much to promote the line, as to influence your vote.

But there has been virtually no promotion of the new RRL line, the trains that now run every ten minutes, the fare cuts in January, or the realtime mobile Smartbus information.

With the huge investment now going into the system to produce these upgrades, it’s time PTV and the government started better promoting projects as they are completed, to ensure people know about the benefits, and the return is maximised by getting more passengers on board.

Public transport in the media is so often dominated by bad news — crowding, delays, breakdowns — the good news stories need to be told as well.

Update: RRL finally had a launch at the end of June (for timetables) and an official opening on June 14th (a week before services start). I haven’t seen TV ads, but there’s been a lot of online ads, newspaper ads, and flyers sent out to locals, such as the example below:

Yes, seems odd not to let people know of something that could be very useful Maybe RRL only affects a small percentage of PT users?
As for “the fare cuts in January”, I think my fare went up by 5%. Now why didn’t the Government promote that?

There is this promotional video on Daniel Andrews YouTube website about the ‘First Four Level Crossing Removals’.

And this ‘Transformer’ promoting the Sydney Light Rail Project.

Perhaps they are taking the local newspaper approach rather than target the news to the whole state. Is it a missed marketing opportunity? Maybe the better question to ask is whether an extensive/expensive marketing campaign provides value for money for the Victorian taxpayer?
I tend to think that unless an initiative affects the majority of the voting population, then there is no added value from expensive marketing or media campaigns. A good example is the value of the video for the ‘Fire Services Property Levy’ which affected most property owners across Victoria, rather then the RRL which will only affect people in one part of the state? I live in the Northern Suburbs and cannot see any reason why I need to know more about the RRL (other than what’s already been printed on the web or in snippets within The Age/Herald Sun. If an extension is built to Mernda, I’m more likely to obtain more information about it in my local newspaper or a letterbox drop rather than from the National or State media outlets.

@wxtre, promoting level crossing removals makes sense to ensure the community is aware it’s happening so they can participate in consultation and be ready for construction impacts, but it’s not advertising for an upgrade about to be delivered – it’s years away, and even when it is completed, it alone is unlikely to will convince people to change their travel patterns (better bus/train services, if provided, might… otherwise better flowing traffic might actually encourage more driving).

@urbancowboyau, I can see what you’re getting at, but as I noted, RRL *does* affect rail services right across western Melbourne, and is expected to enable better services into western Melbourne and Geelong and other regional destinations – as I said in the post, many people all over Melbourne could benefit from this, and the halo effect should not be underestimated.

Note that even the local paper story has no info on timetables. We still don’t know how useful the service will be for people.

Perhaps there’s reluctance to promote something that has political history, and not all of it good. Fear of the opposition using it as a bad news opportunity? I imagine sound bites like “they delivered our project”, “we fixed their mess” and “if this is how they do projects, get ready for cost blowouts and delays”. It’s petty, but that’s the depths to which our politicians have sunk when it comes to state transport infrastructure.

‘Concrete-first’ seems to be the guiding principle of public transport planning in Victoria. Getting big things built is what matters, having good service, improving bus connections and frequency comes at a distant second. This seems to be reflected in how the network is marketed as well, doesn’t matter if the service is a couple of times a day, as long as there’s something built. But it’s having a good level of service that’s actually going to make the system usable – we’re happy to splash hundreds of millions on big new infrastructure, but the important service improvements, which are comparative bargains ($4.5M/y for trains every 10 mins on South Morang line for example), seem to be too much effort.

Our bus service recently quadrupled in frequency, something almost unheard of, and not a mention by PTV or Transdev.

I agree, they do a terrible job of communicating the benefits of anything.

Is it to do with the Byzantine set of agencies associated with public transport in Victoria? Who would promote this? PTV I’m assuming, but the main ads they seem to be interested in showing are about penalties. V/Line? I’ve never seen much advertising from them. Does the RRL Authority even still exist?

If there was a Greater Melbourne government, perhaps they’d have a transport agency (similar to TfL) which might promote this sort of thing. It’s unfortunate that public transport initiatives (level crossing removals, new lines, new bus services) are left up to state politicians to announce — they shouldn’t be part of that process. Public transport shouldn’t be associated with a political party; it’s a public asset. Governments shouldn’t be funding initiatives, they should be funding independent agencies.

In today’s Age, on the imminent opening of the RRL… “I haven’t seen any signage, I haven’t been given any advice from V/Line,” she said. “In a month’s time my commute will significantly change and I haven’t had any warning to work out what I’d do.”
http://www.theage.com.au/victoria/mind-the-gap-key-connection-missing-from-regional-rail-link-20150522-gh7iw2.html

The RRL in Victoria will remove services from 2 or more stations.

Not sure if that is worth advertising.

If they want to make PT more fun, why not put a speedometer in every train carriage like the Shanghai Maglev has?

Jacon: Perhaps the speedometer ‘fun times’ you suggest would work the opposite way, as the woeful 40kmph-odd average of Metro trains would discourage even current patrons. not quite as impressive as the 350kmph + of Shanghai’s Maglev. Nice idea though

There are signs in Wyndham Vale promoting that the station will be open and operational from 21 June. I assume that locally in Tarneit would be the same. The land developers are certainly advertising the fact that new land will be available near to transport.
Pity that the project was pared back from six stations to two, no extension of the Werribee line to Wyndham Vale which would have provided a seamless interchange from V/Line to Metro and no stabling yards. Local papers have had many articles about the additional buses which will need to be found to transport Geelong travellers to/from Werribee/Wyndham Vale along a two lane road that already has major delays

Rather than extending the Werribee line around the curve to Wyndham, I’d be advocating an extension towards a clockwise loop Werribee – Little River – Avalon – Lara – Little River – Werribee; with four platforms at Lara for interchange with V/Line services. There could also be a second loop for Geelong Metro runs, Corio – Lara – Avalon – Corio.