East West Link is now that it’s dead, buried and cremated (to coin a phrase). Though I’m not sure that’s how you destroy zombies. 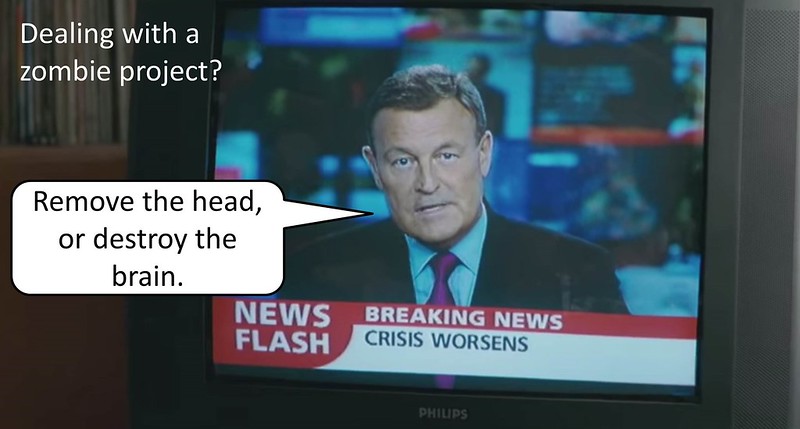 Some closing thoughts on the project…

The $339m payout is less than a single year of the expected $345m annual Availability Payments that would have been paid if it had been built — let alone the billions in other costs. So yes it’s a lot of money, but given the <1 Benefit Cost Ratio, we the taxpayers of Victoria really dodged a bullet here.

Part of the problem is that for the huge cost, the tollway would have provided some traffic relief… but only for a short time. Studies by the Linking Melbourne Authority showed traffic on Alexandra Parade would have returned to the previous levels by 2031, just 12 years after opening.

Given it won’t be built, the Eastern Freeway will continue to finish at Hoddle Street. It was planned that way. In 1973, Premier Hamer cancelled the forerunner to the East West Link, an inner-north surface freeway across, and but pushed ahead with building the Eastern, knowing it would finish at a dead-end, which the road lobby happily accepted at the time. So the current situation is by design.

Being a zombie, it came back. Salami tactics.

East West Link wouldn’t have helped unclog the Eastern and Hoddle Street, because most cars are headed for the CBD and inner city, not across to Flemington and the airport. You can actually see this when driving east to west: the traffic moves faster in the 1-2 lane sections from College Crescent to Elliot Avenue than it does in the 4-5 lane sections further east.

In fact, current traffic levels are falling. Vicroads data shows traffic fell up to 15% on Alexandra Parade (depending on where you measure it) between 2002 and 2012.

We’ve spent seventy years trying to solve traffic congestion by building more road space for cars. Sooner or later we’re going to have to accept that it doesn’t work.

But the scale of PT capacity is vastly bigger, because each person isn’t bringing 2 tonnes of rubber, metal and plastic with them, so it takes a lot longer to fill up again.

So, more capacity can often be squeezed out of existing lines, but even if we have the expense of a new rail line, it will take decades to fill up again.

Despite red herrings like “tradies!!”, most people can use PT if it’s provided and competitive with driving.

So now Labor’s pushing ahead with the metro rail tunnel instead, which (along with level crossing removals, signal upgrades, fleet upgrades, and the one thing they haven’t announced yet: duplication of single track) enables a lot more people to be moved through our busy city. Now they just need to figure out how to pay for it, given the Feds under Abbott won’t.

The political implications of all this are obvious. The Coalition went into the 2010 election and won it on the back of public transport issues — reflecting survey after survey that said people wanted PT ahead of big roads.

(A few surveys conclude people want motorways, but only when they’re not offered a choice. But money is limited. Choices have to be made. We can’t afford every multi-billion dollar project that’s thought up, especially not the ones with poor returns on investment.)

Then in late-2011 the Coalition completely changed tack and tried to ram through the East West Link ahead of the 2014 election.

Tony Abbott declared the 2014 election to be a referendum on the East West Link. Well if that’s true, the people voted it down.

Will this zombie come back? Perhaps.

But the lesson here is clear. If you’re determined to embark on the largest infrastructure project in the state’s history, seek a mandate for it.

PS. When I put in the Shaun Of The Dead references, it was just for a cheap laugh. But that specific point about destroying the brain is a reminder that these issues about how we want our city to develop, and whether we want to pursue policies prioritising private cars or mass transport are not primarily about engineering, but ideas.

8 replies on “EWLink zombie is dead, buried, cremated – some thoughts”

I think you summed it up well: “But money is limited.”
Groan. Yes, that’s the problem. Community expectations are for a vast network of roads to take them from A to B without stopping at a traffic light AND great public transport all across Greater Melbourne. Funds are limited so governments have to ration transport projects. No one wants to pay tolls, no one wants PT fare increases, no one wants higher taxes and governments shy away from taking on more debt.
A difficult and complex issue.

Yep, it is dead for as long as the ALP are in power in Vic.

Once the Liberals get back in…..

I only hope we get a decent start on the Metro tunnel before this current term is up, because we are darn sure the the Libs will want to seek revenge on the ALP.

Just curious about your red herring tradies comment? Why are certain industries that rely on roads to do their jobs simply red herrings? Seems a bit flippant :/

Tim,
The ‘tradies!’ argument’s a red herring because:
1) the amount of traffic comprised by tradies who have to carry their tools to and from their jobs (and thus can’t use public transport easily or at all) isn’t so great that it *in and of itself* justifies the cost of the road; and
2) if it did, then why would you allow everyone else (apart from freight) to use the road?
The ‘tradies!’ argument’s also used as an excuse not to invest in good public transport (why should their tax dollars fund it when they can’t use it anyway?) – but good public transport will get people who can use it off the roads, making room for tradies (and freight).

I dont disagree with any of that, I guess I was more referring to the running commentary seems to be “screw anyone who has to drive, har-har, catch the train!” Sure it might not justify a $10B road but to dismiss it completely seems slightly misguided to me.

Was also curious about population growth in relation to some of Daniels comments above about building new roads. Would be cool to see a graph (I like graphs). The eastern was designed to finish in the CBD but was that based on current, lesser or higher population levels? Did we match the population predictions from the 70s?

This is a major problem with our current debate is that we are not discussing ways to get different modes of transport to be integrated.
It is not a car versus trains debate it is about getting all the modes to work together for a more positive outcome.

To put this into plain english what we should plan for is much better PT services for people who live in the inner city and near train stations while also improving facilities for people who still need to drive.

Due to the density of Melbourne it is clear that most people will and continue to rely on cars and roads into the future.
This is why we need to focus on a system that allows people to transfer between different modes of transport and allow drivers to find more efficient ways to use the car.

Some ideas that have proven very popular are concepts such as Uber ridesharing, carshare pods and car next door rentals. This allows residents to be able to use public transport while also being able to use a car when using PT is inconvenient such as a weekend drive to the country or shopping for bulky goods.

So its not a goal for a competent transport planner to “screw over car drivers” but the goal is to use cars more efficiently and improve PT services in areas where a private vehicle can easily be replaced by a trip with a train ot other mode such as a bike or walking.

Re: “Tradies!” the hyperlink just after that in the post goes to the relevant information – in short yes some need to carry tools etc by vehicle, but that’s the minority of people.

Population growth is a good point, and yes it’d be worth plotting it again, say, road traffic numbers. But it doesn’t change the point that the trips generated by population growth will end up on various modes, influenced by the provision made for them by policy makers/government. If driving is easy, they’ll drive. If PT is easier, many of them will use that. For most of the past few decades, little or no useable (frequent) PT has been provided into most new suburbs, so of course those suburbs end up car-dependent.

Well thought out.
I agree with everything.