At the northern (Lonsdale Street) end, it’s so narrow that you could easily walk past it without noticing. It’s all a bit… I dunno, Platform 9 3/4. 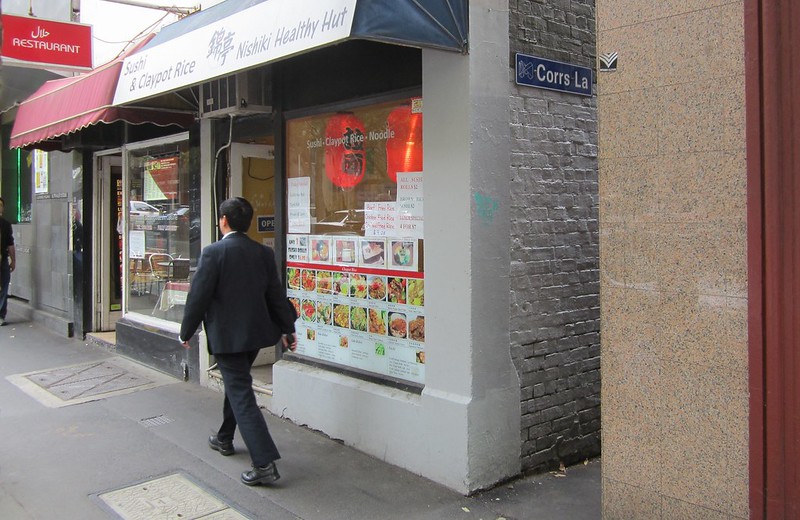 I noticed yesterday snapping pics that there seems to be one property entrance in this narrow section, which still gets mail deliveries.

It’s narrow enough that two pedestrians can just pass each other. If a wheelchair user squeezed in, you’d have problems getting past.

Is it the narrowest laneway in the CBD? I don’t know… anybody know? 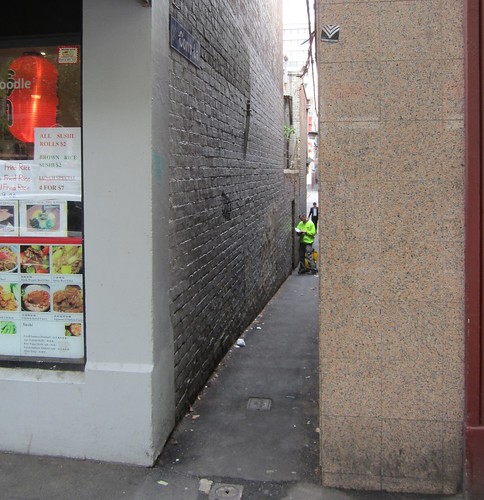 After a little way, the lane soon widens out to a more standard width, with various Chinatown restaurants prominent. 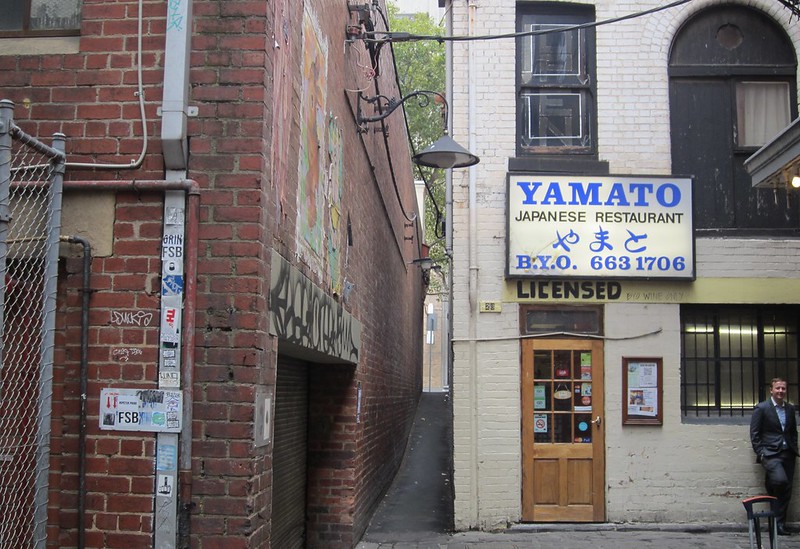 It was one of these restaurants (since disappeared/changed hands from the looks of it) which a group of us, all of whom worked at various places in Lonsdale Street, used to eat at regularly around the turn of the century. Partly based on its small size, and partly based on the tiny lane to get there, Josh dubbed it “The hole in the wall”, though I’m sure it had a real name.*

At the time the lane had no markings at the northern end, and in fact I totally failed to direct someone to the restaurant by phone once, as I couldn’t remember where he needed to look to find the lane.

At the southern end, it seems extra wide thanks to the presence of one of the last single level car-parks in Melbourne’s CBD, with some bonus Melbourne street art to brighten the place up. 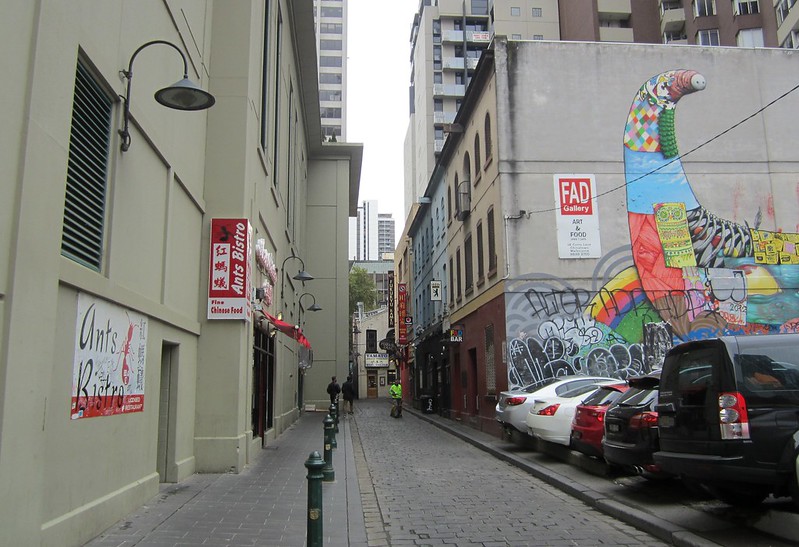 I had a quick search around, and couldn’t figure out what or who Corrs Lane is named after, but couldn’t find anything — it’s not in this excellent list of names from the Royal Historical Society of Victoria. Maybe better researchers than I will have more luck.

*Some of us might remember that the term “hole in the wall” was once used to describe ATMs (automatic teller machines) when they were first introduced.

Interesting that the Japanese restaurant has a 7 digit phone number, indicating that the sign is around 20 plus years old

Can’t tell you anything about the name unfortunately, but one interesting piece of trivia regarding Corrs Lane is that it hosted the power plant for one of the first electric street lighting projects in Melbourne in 1888 (in one block of Russell St between Bourke and Lonsdale). Some other early electricity generation sites nearby are still in use by Citipower, but not Corrs Lane itself as I recall. (Though apparently the underground cables from 1888 were still in use by the Council into the 1970s.)

Until recently, a handful of CBD sites were still being used for single-level car parking because they were actually the roof decks for underground electrical substations and the Council wouldn’t permit building on them. This seems to have been relaxed in recent years, doubtless through a combination of improving technology and rising CBD land values.

@Tony, that’s interesting about the substations. Perhaps that’s the only reason some of the few small ground-level car parks remain.

That lane is seven kinds of awesome! I love it! I haven’t seen it before, but I can, will, must visit it!

I’m always on the lookout for those old seven digit signs. I especially love it when a building is removed and you can find an even older phone numbering system in a sign that had been invisible for generations.

btw @gxh, you’re showing your age by having a landline number.

I’ve been down this laneway many times and I have eaten in many of the Chinese restaurants in the area too. I have never tried Yamato though. The dumpling place (I think it’s called Shanghai Street) to the left of where you are standing is very good and a good value for money too. Under $25 will buy more food than I can eat at once.

i think Corrs Lane was the only way into and out of China town in the mid 1800’s.

This may be crass but I wonder how many people have urinated in that laneway.

I’m actually wondering if it’s named for the Corr family that started what is now Corrs Chambers Westgarth lawyers (better known as Corrs) in Melbourne in 1841.

The old Melbourne Magistrate court was located on the corner of Russell and Latrobe Streets. It might make sense for a lawyers office to be in this vicinity. I do not know if the dates correspond.

A few hundred metres to the east is another narrow CBD laneway – Cohen Place.

It runs north from Little Bourke Street in Chinatown, between Russell and Exhibition Streets:

Wow, the things you find here. I used to work opposite Corr’s Lane, at the Bureau of Meteorology on Lonsdale Street, before we moved down to Docklands. I used the lane every day, and we ate at Yamato’s a lot. Cory’s Lane was very handy – dash across the road and you were on Little Bourke St.

I believe the lane was named after Thomas Corr an Irishman who died in 1873. While searching family history yesterday found his will outlining property he was a wheel wright.

Thomas Corr is my 4th great grandfather he arrived in Melbourne in 1841 on board the Lysander. The family lived on little Burke st in 1846.

In 2006 as part of the Commonwealth Games Art Program, Space Pork Adventures ran an art event called Widening Melbourne’s Narrowest Lane. About 30 people squeezed into the lane and began to push. A photo published in the Herald Sun the following day motivated a retired builder to write in saying that he could see that the brick work in one section looked like it was beginning to crumble.

The story I have from my family is that two brothers from Ireland owned the land in that area.

Have been always wanting to visit Corrs Lane so just looked it up to put it in our to do list next time in the city. So thought would google and found your picture. We had old furniture from our grandmother and when breaking it up (got borers in it) saved the piece of wood that has a stamp/brand on it ‘QUONG YICK maker Chinese Labor 14 Corrs Lane (off Little Bourke.) Melbourne.’ in a triangle.