As far as I can see, since the January zone changes, there is now no monetary benefit to touching-off your Myki for trips in zone 1, or zone 1+2.

This is because the Myki Money Default fare (the fare it assumes you should be charged if you touched-on, but never touched-off) is normally the same as the fare incurred for those trips anyway: $3.76 full fare, or $1.88 for concession.

This means you may be able to avoid the long queues to touch-off when exiting non-gated stations, as well as crowded buses (and trams).

I’ve tested this on Myki Money — it works correctly.

(It’s always been the case that Myki Pass had a default fare of zero if the trip started in a zone covered by an active Pass.) 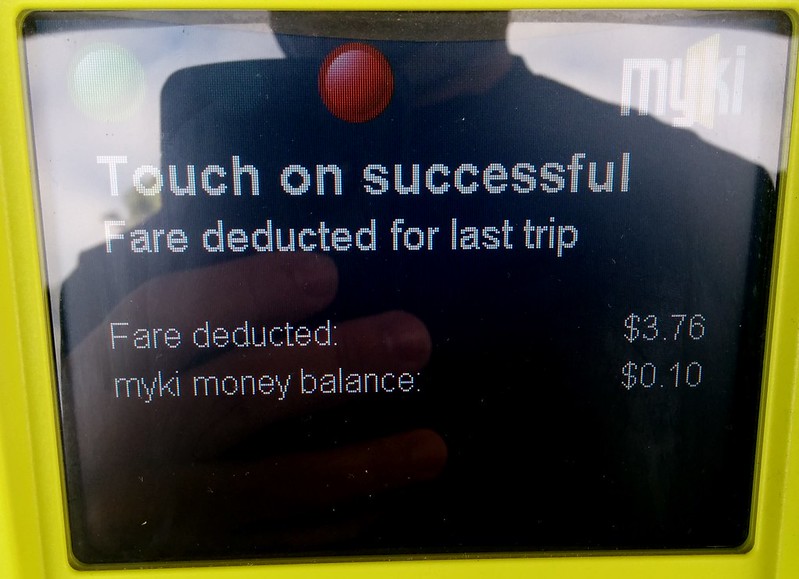 There are a few exceptions

There are always complications with Myki. It’s consistently inconsistent. Here are some examples of where you may want to touch-off:

If you are intending on making another trip within two hours, you may wish to touch-off, otherwise your next touch on the same mode may be treated as a touch-off, potentially leaving you without a valid ticket if you don’t notice. This will happen if it’s the same station, and may also happen if you board the exact same bus or tram as your previous trip. If you didn’t touch-off, double-check your next touch when you board is on.

For Zone 2-only local trips, it’s still worth touching-off if you want the cheaper zone 2-only fare. If you were going into zone 1 anyway, it doesn’t matter.

(By the way, on Zone 2-only buses, the Default fare, if everything’s working correctly, would be the zone 2-only fare. Ditto, theoretically, on a tram in the zone 1+2 overlap heading towards its outer terminus. But Myki has enormous problems with GPS location detection, so don’t count on it.)

V/Line users need to be wary. The $3.76 fare applies from Melbourne out as far as Lara, Bacchus Marsh, Riddells Creek and Wandong, but if the conductor comes through and checks your ticket, they may also set the default fare to the end of the service, which could be a lot further away.

You may also wish to touch-off if you’re trying to take advantage of the Myki Pass payback glitch.

On the first trip on a new Myki Pass, I’m not sure if it’ll activate properly if you don’t touch-off. Anybody tested that?

It’s unclear what this will do to the stats if lots of people stop touching-off, but they basically threw away the prospect of comprehensive stats when they started recommending no touch-off on most tram trips (back in 2010). So perhaps it doesn’t greatly matter. They still use manual counting anyway.

And of course on suburban trains, the worst crowding is AM peak, and since most of those trips start with a touch-on, and end at a gated station with a touch-off, they’ll still have good stats for the busiest time on the rail network.

If default fares confuse you, it may be worth touching-off — remember, they get charged the next time you use the system, and that could be hours, days, weeks or months later. This can also result in some odd-looking online statements. 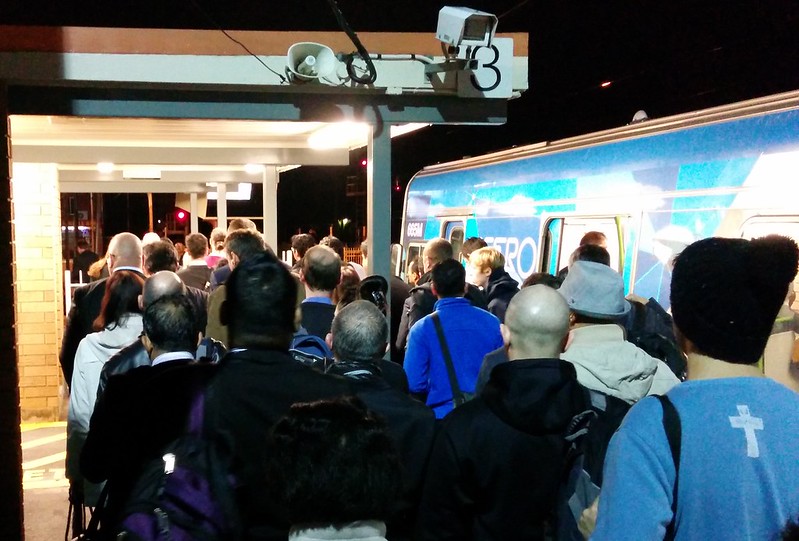 Will they promote this?

Having locked us poor suffering taxpayers into spending $1.5 billion over ten years for the complicated, bespoke Myki system (and also a small fortune on adding station exits), now they’ve basically switched Melbourne to a flat fare for most users, will they officially promote the fact that it mostly makes no difference if you don’t touch-off?

I don’t know. They never did so for Pass users, even though it would help clear the exits at busy suburban stations in the evenings (and in turn, help trains run on time, as sometimes the crowds block the driver’s view, delaying departure).

PS. If you haven’t heard: PTV is finally getting its timetable data ready for release for Google Transit (and other apps) in March: Age report.

Is this legal to not touch off at the destination train station using myki money? Could I be pounced upon by an Authorised Officer for not doing so even though I’ll be paying the default fare anyway?
PS Those of us using early bird train trips – you MUST touch off before 7:15am weekdays to get the free trip.

I don’t see why it would be illegal to not touch off – if the authorised officer scans your Myki, it’ll show up as “touched on”.

Actually, yeah, I think the Victorian Fares and Ticketing Manual says it’s okay to not touch off.

Validity of tickets
General
A myki is valid for a journey in a passenger vehicle or an entry to a designated area:
(a) if the myki has been touched on and touched off in accordance the conditions contained in this chapter…

…Despite subparagraph (a) above, if a myki has been touched on but has not yet been touched off, and if the myki otherwise complies with the requirements of that paragraph, the myki is to be treated as valid for the relevant journey or entry until such time as the obligation to touch off the myki arises.

In terms of the legality of it, there is nothing saying that you need to touch off – only touch on to have a valid ticket before (or as) you board.

Lucas, I moved your comment to the blog post about the $1.52 glitch, and will reply to it there.

Arh, just goes to show what dickheads we have in control.

Really, it is vital to the efficient allocation of public transport, for the officials to have the stats on who is using what.

My understanding is that is one of the many big reasons for getting MyKi system in the first place.

I can’t believe that your old mate Denis Cliche has gone from Connex to WestConnex.

There is one more circumstance where I strongly recommend to touch off: if this is your last trip of the year, or your last trip before a price rise.

The Myki people imply this issue no longer exists, but I’m not convinced. My daughter took a trip in October one year, and couldn’t touch off. The next trip was in February next year. Result: the default fare for the October trip was calculated at the NEW rate.

A refund was granted after this was reported.

Be aware, if you don’t touch off, the machinery won’t show a truthful balance on the card, unless the default fare is zero. It probably catches out people who loaded up their card to $6 (weekend cap), then wonder why it stopped working when they tried to get on their second transport.

It’s because the system deducted the default fare, as well as the $6, sending the card negative.

There are problems with not touching off/on with a pass. This morning my card was still touched on from the night before. I didn’t touch on in the morning and then I couldn’t get through the gates at Southern Cross. I then went to the kiosk and they said my card was still touched on from yesterday and told me to touch on again and then off. It doesn’t even make sense that the card should be touching on and off considering that there is only 1 zone of you have a pass it should just allow you through the gates

@Wayne, I don’t think anybody said you shouldn’t touch on. You should still touch on each trip, especially train where you’ll be exiting through a gate.

[…] the January 2015 change that made zone 1 travel the same cost as a zone 1+2 journey, there is no longer a financial reason to touch off – which makes the wait to exit the station each evening even more […]