I don’t drive as much as many people (my average kilometres per year figure is about half the national average), but here are some recent random observations…

Seat belts. Why do some people wait for a few hundred metres before they put on their seatbelts? Do they think they’re somehow immune from accidents for the first minute or two?

Petrol prices are down at the moment. It’s unclear if this will get more people driving more often or further, or buying bigger gas-guzzling cars, but looking at the longer term on the bright side, it’s completely taken the heat out of the government re-instating indexation on fuel excise.

Manual vs Auto. My car is a manual. I had the opportunity to drive an automatic a few times last year. It’s easier to drive, but perhaps not as responsive as driving a manual. The car took a few seconds to work out when I wanted to accelerate rapidly… in a manual, I can tell it exactly what to do. 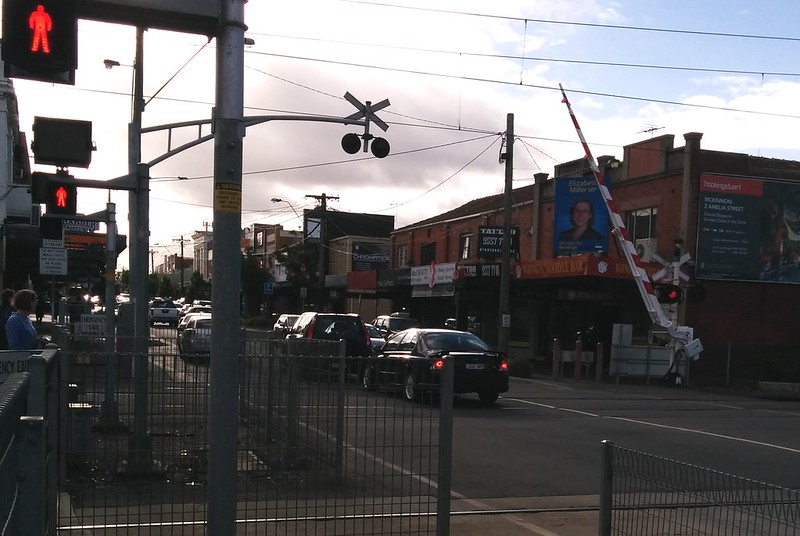 The race: One of the books I read a year or two ago (I’d tell you precisely which, but I can’t remember, and haven’t found the quote) noted that driving is a race. I think that’s right. I’m not a speed-freak (I hope), but on multi-lane roads, I constantly find myself wondering if I can get ahead of the other cars by switching lanes.

On single lane roads the race becomes one of strategy. Avoid Caulfield if there’s horse racing today. Don’t use the tram roads; you may get stuck behind one. Don’t drive through the busy shopping centres if you don’t need to go there.

Of course, if you get stuck behind a slow driver, ultimately, that’s just life, right? It’s the nature of the road system — everybody’s at the mercy of the worst drivers on the road.

11 replies on “Thoughts from the road”

On one side, I doubt people will go after yank tanks just because of the price drop. People would be in fear of fuel prices going back up again.

On the other side, it may cause people to drive more. Except for the recent change to zone 1+2 fares may mitigate journies over that area for now. None the less, public transport shall loose those of who are using it only because $1:50 is just too high for their budget.

You can not store modern petrol for more than two weeks, as it does now go off. Unlike in the past where you could buy your 12 months worth and it would still work in 12 months from now.

The only way that people can offset future return to $1:50, is if they where to put a small supply into storage. But that will not work. The only way that may happen is if people keep their fuel tanks on full as much as they can.

I doubt that anyone would plan ahead for any longer than normal drives, as people shall fear the price may return to $1:50 before the do their trip.

Those who do have a long drive due this weekend, are sure to fill up their tank now before they go.

What I am sure to happen is,
+ People may save the difference, or spend it on luxuries
+ May use public transport less. Especially those who are using public transport because $1:50 is too much for their budget
+ Do longer than normal trips, or road trips they may not otherwise do, but only with short term plans such as one week ahead.
+ People may try and keep a full tank during this low price so they can hold off when the high prices return.

TranzitJim – is that true about modern fuels? My bike sits for much longer than two weeks between uses, still starts and runs like a dream.

Daniel – what is the national average for kms driven? I’d guess around 20,000?

I prefer a manual transmission too. I also don’t drive much, perhaps one or two times per week. I’ve never had a problem with petrol/gas spoiling in over 30 years of driving or heard of such a problem in cars either. Since living in Australia I only buy fuel every 6 weeks or so depending on how much I drive and I take trams and trains for the rest of my travel needs. I also walk much more here too. I have heard of fuel in lawnmowers and other powered yard tools going stale after sitting for many months but there is something called sta bil (SP?) that can be added to preserve the fuel.

There’s no way petrol routinely spoils after two weeks, at least not while in a tank. I typically refuel my car about once a month. Of course Jim’s point may be that you can’t stockpile it.

@andrewc, according to these figures, the Australian average is 14,000 km (in 2012), though in Victoria it’s slightly higher.

When I worked it out last, I was doing under 6000 km per year, higher than it’d otherwise be in part thanks to several trips to the country each year to visit in-laws.

Seat belts: Dangerous and illegal to drive without them.
Petrol prices are down: People are spending some of the savings and paying down their mortgages with the rest.
Manual vs Auto. Yes, with a manual you have more control of acceleration, but you can’t keep both hands on the steering wheel.
The race: Changing lanes is about efficiency of traffic flow, not racing. You sound like a good driver!

In the manual v auto. For a city car that is anything but super small and underpowered I would go an auto. So much easier in city traffic and modern 5-6speed autos often shift faster than even the slickest manual driver and have better fuel consumption figures than their manual cousins.

Changing lanes can actually cause congestion. The best techniques for reducing congestion on freeways are congestion charging, variable speed limits and ramp metering. Of course, in the long run improved public transport will reduce congestion.

Seat belts are about reducing danger, not eliminating it. By not wearing a seatbelt for the first few hundred metres, you’ve increased your risk of injury by, what?, one percent or less? And, in many cases, on relatively safe (50 kph) side streets? I’m not endorsing people doing this; I’m pointing out that it doesn’t make much practical difference. (And a few hundred metres would only be a few seconds, not a minute or two.)

I believe that two-stroke fuel (often used in mowers) left to itself is not good, because it’s a mixture of oil and petrol and the two will separate if left unagitated for too long. I’m not aware of other petrol spoiling. I think it’s illegal for an unlicensed person to possess more than a drum (200 litres?) of it, though (not including what’s in the tanks of cars).