Given the Flemington/Showgrounds line isn’t running this morning, and the Stony Point line has planned bustitution, I’m going to go ahead and declare that we have Metro Bingo this morning due to the storms. 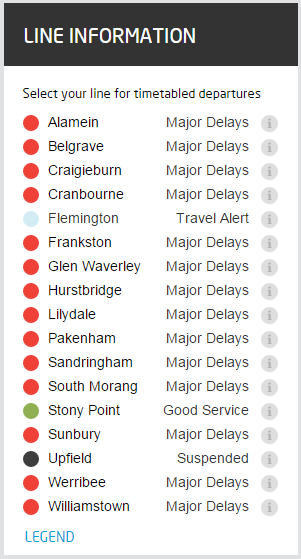 And no, it’s not much better on many of the roads. 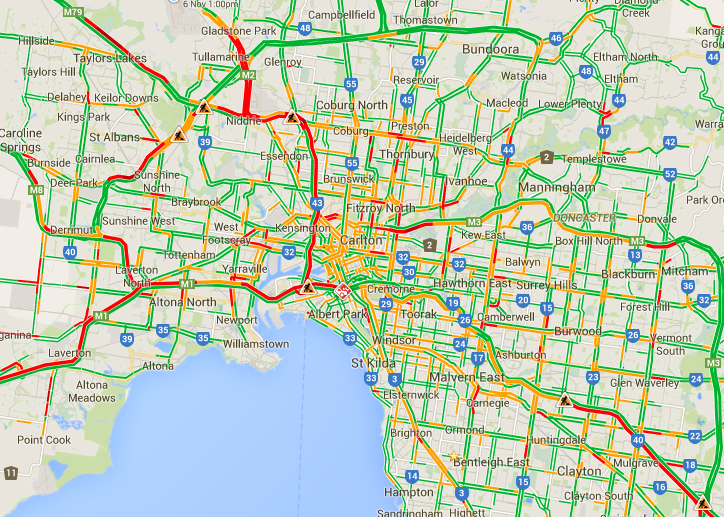 Good luck to everybody (myself included, shortly) trying to get to work this morning.

PS. My trip in wasn’t too bad. Although the train was running about 30 minutes late, I had only waited a few minutes for it. It was crowded but not packed.

At Caulfield. Train is about 30 mins late, but at least we're moving. Not completely packed…yet. #metrotrains pic.twitter.com/lrv0VbCM6h

Judging from the re-tweets/favourite reactions to this, I’m not the only one who thinks huge umbrellas aren’t a great thing on busy streets:

The train journey home was actually less smooth. Our train broke down at Richmond and was taken out of service.

Guess what? We a just got kicked off the train at Richmond due to a fault. #metrotrains pic.twitter.com/r4ZQl9bUcj

And a reminder: in times of train troubles, it pays to know your alternative routes. Connecting from another line via bus or tram is possible from almost all stations, and, particularly if you’re there when the disruption starts, is generally faster than waiting for hastily-organised replacement buses to arrive. Check this excellent web site: Alternative Metro Travel Options

On the Sandy line, I managed to get as far as Richmond station this morning without a problem. I decided to walk to the city (25 minutes to the office via MCG and Fitzroy gardens) since an announcement indicated delays to “Flinders” (I thought the Stony Point line was running OK?).
Goo luck to everyone else playing Metro Bingo !

It is more common for the Stoney Point line to be the one one that is suspended.

But twice in recent times, Stoney point was the only line still operating normally. What a contrast.

@Jim, my point was: the Stony Point line was NOT operating normally. Numerous services had planned bus replacements.

Daniel, I think Jim was responding to my post (me making a bad joke).

Sorry, I was going by the Metro status board only.

I forget what the previous event was when we also had the board saying Stony Point line was the only one operating normally in recent week(s). But again, I am going by what is shown on the Metro status board there too.

Alarm went off at 7.30am, rolled over and went back to sleep. Had a headache any way. Turned down an interview for Monday as I knew the trains would be running properly.