In the days before home video, we had to resort to other means to re-live movies and TV shows.

Novelisations of productions were common. I knew people who had hundreds of Doctor Who novelisations — virtually every story had a book published. I had perhaps a dozen. 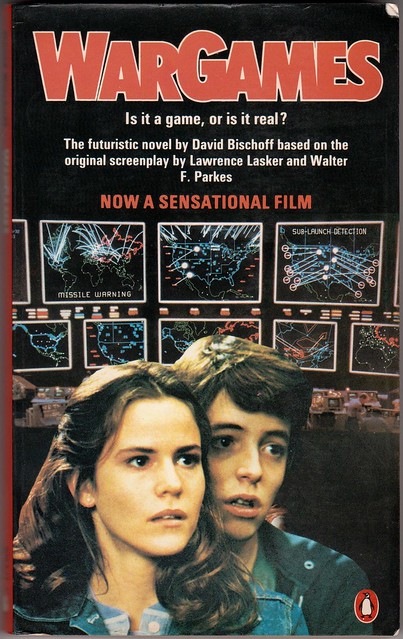 Other books made it into publication — scripts, programme guides, and spin-off material. Of course these are still common, but perhaps only for specific “cult” titles that the makers think will sell really well.

I used to have the script for The Singing Detective. At home I still have two books from The Goodies, which have a wealth of quite amusing material. I didn’t bought them, but acquired them both from the primary school library during clear-outs.

Some people would record TV shows onto audio tape. About a hundred 1960s Doctor Who stories are still lost — but audio recordings exist for every single one. (It’s perhaps a sign of the priorities of big bureaucracies like the BBC that paperwork exists for all the stories, despite the actual stories having been thrown out.)

In the 80s before I had saved up for a VCR, I recorded some stuff onto audio… from memory by just putting a tape recorder close to the TV, though I may have later rigged up a cord connecting the two directly. The Young Ones was an example — I had most episodes on cassette, and listened to them regularly for a while.

One of the movies I bought the novelisation of back in the day was WarGames, which as I’ve written about before, was very influential on me. As I recall it follows the movie script closely, but has a few extra titbits: such as that after the movie ends, David gets a summer job doing computer work at NORAD, and his school is convinced to buy some computers to teach computer studies to the students.

I don’t know what happened to my copy of the book. Presumably I got rid of it during a house move at some point. So in the best traditions of nostalgia, when I got curious and looked on eBay the other week, I found a copy for under $10, and bought it again.

I still love the movie. I bought the 25th anniversary Blu-ray release recently as well — it looks great in high-definition. I’ll probably re-read the book at some stage. It’s only 220 pages — it’ll be a pretty quick read I’m sure.

Nowadays, people can record anything off TV easily using cheap technology, and perhaps every major TV show and movie is released on DVD and/or Blu-ray, and (eventually) repeated ad infinitum on one of the many TV channels. No wonder novelisations have mostly disappeared, and few people record audio off the TV anymore.

6 replies on “Before home video”

Thanks for the nostalgia – funny how the 1980s is now a generation ago.
While I agree that reading a book based on a film is a nice way to re-live the movie, I’m not sure that this was a substitute for seeing the movie again (or recording it on audio/video/digit). I love reading because I love fiction. I have every episode of Fawlty Towers on DVD but I still enjoy reading a book of the transcripts (and continue to LOL even though I know what’s coming).
Marketing people will still promote book tie-ins to films, even if the movie came first. Movie ticket, DVD and book sales will all rise nicely together.

@Roger, thanks – Fawlty Towers reminds me that I had the LP records of the audio of that show! They added a few bits of narration from Andrew Sachs/Manuel to describe the visual gags, and some episodes simply didn’t translate, and weren’t released in that way — I think 8 out of 12 were available on LP.

@Daniel – Let me guess that Basil the Rat was one that didn’t make the cut to LP? I can’t imagine that episode without (the other) Basil & Manuel’s hilarious slapstick, nor the cheap rat puppet sticking out of the biscuit tin!

I remember seeing War Games too as a teen sometime in the early 80’s and it is a very good film. It probably was before ’84 when we got our first VCR. I can remember the first movie we rented for the VCR was “Tex”. This was the movie version of the book by the same name written by if I remember correctly S.E Hinton when she was just 17.

I remember audio taping Superman:The Movie and then transcribing and typing up the whole damn thing in the mid 80s.
The original novelisation of Star Wars had a bit in it that never made it into the movie: Luke and Ben Kenobi are discussing (I think) Luke’s father and Ben says something about him taking to The Force like a duck to water and Luke asks, “What’s a duck?” Implying that Ben has been to Earth?

@Julian, I never replied to this. My recollection is The Rat did make it onto LP, and I see it’s been re-released and you can buy it on CD now: