I swear I wrote most of this blog post before reading last Friday’s Age article regarding contract law experts including Dr Nick Seddon. It confirmed my suspicions:

Should Labor win the November state election, there is no legal impediment stopping it from tearing up the contract for the East West Link if it is sincere in its opposition to the road project, experts in contract law and public policy say. 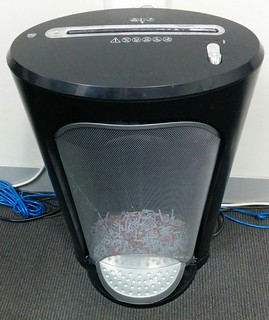 Labor are in the interesting position of officially opposing the East West Link (section 1, at least), but saying that if the contracts are signed before the election, they’ll build it anyway, citing “sovereign risk”:

If Dr Napthine snubs the state Labor’s plea and signs a contract before November (2014), Mr Andrews said he would not rip up the contract despite it being the “wrong project”.

The Victorian Greens are threatening not to direct preferences to Labor in marginal seats at this year’s state election unless the ALP pledges to rip up contracts on the east-west link if it wins government.
…

Labor leader Daniel Andrews has consistently said that while he does not support the east-west link, he would not rip up contracts once they were signed because of sovereign risk.

It happens all the time

Now, I’m no lawyer, but even before Dr Seddon spoke out, it seemed pretty clear that the argument of sovereign risk doesn’t really up.

A quick look around the place finds numerous examples of both threats to tear up contracts, and governments actually doing it.

It seems to be abundantly clear that governments of any persuasions can rip up contracts if they like, as long as they are prepared to stomach the legal and political consequences.

The latter might include accusations of sacrificing jobs, and undermining business/investor confidence.

Sovereign risk, as Bernard Keane at Crikey writes, has morphed into a general meaning of governments doing anything that a business doesn’t like, no matter how much it might be in the national interest.

Another good example (though not directly related to a specific contract) is the Rudd government last year ending FBT car rorts costing taxpayers billions of dollars a year by effectively allowing people to claim personal use of cars as a business tax deduction. The Coalition reversed that decision, perhaps helped along by what I hear was a massive lobbying push from the novated car lease industry.

If East West Link is so good, take it to an election

East West Link is likely to be the most expensive infrastructure ever built in the state — and it’s not just about the construction cost, it’s also the cost of decades of availability payments from taxpayers to the private owners, to ensure they make a profit.

In the case of the East West Link, the Coalition government has ignored years of opinion polls showing people want public transport ahead of motorways. And they’ve refused calls to release the business plan, and to seek a mandate for the project at November’s election, despite it being a hugely expensive, largely unwanted project.

As Andrew Herrington wrote in Crikey: Inner urban resident groups opposing the freeway are incensed that… Labor will quietly let the freeway be built. They urge Labor to pledge to “tear up the contracts” arguing that the ink will be barely dry and the normal arguments about sovereign risk and payment of damages hold little weight if the validity of the contract is questioned in advance.

If Labor really believe it’s a dud project, they should properly differentiate themselves from the Coalition. They should make it clear right now that if they win, they will tear up the contracts, scrap the project (no substantial work is likely to have started anyway), and put the money into alternative projects, such as new rail lines and more Smartbus services.

Flagging it before the election, and before contracts are signed, means investors can only blame themselves if they get burnt, knowing that the risk existed all along.

As it is, it seems both major parties are denying the Victorian people any kind of say about a project which is not only unpopular, but will also generate heaps of traffic in the inner north, and swallow up billions of tax payers’ dollars.

Sign the peition: No mandate: Give Victorians a chance to vote on the East-West toll road

6 replies on “Sovereign risk not an excuse for pursuing bad policy: Labor should pledge to scrap EWLink contracts”

State Labor do not want to lose votes from the many people who like the East-West link project. They are having two bob each way.

Been focussed on little else for the past eleven months and the reality is exactly what came through strongly at the recent Assessment Committee hearings: this is an unimaginably bad project at every level. There hasn’t been a week go by that has not exposed some new failing of sufficient magnitude to abandon the whole mess.

The reason is basic. The process has run on a political timetable with no opportunity for the kind of consultation that might bring the concerned public to an agreeable position. And it impacts complex inner-urban areas where the proponent has no relevant experience. In the absence of established route reservations, such projects need several years in the planning and approvals phase. They certainly don’t need responsible authorities and interested parties sidelined through special legislation and political pressure.

Beyond everything else, there has been a failure of the proponent to substantiate claims about benefits beyond saying they are “obvious”. All available data indicates any net benefit is illusory with benefits to individual motorists likely outweighed by diminished overall transport performance, and that is even before any accounting for planning, social, environmental and construction costs. It is particularly informing that no advocates for the project have been willing to make their case in any of the many public forums called to discuss it.

@Tony Smith – Very well said. I agree with every point.

@Roger – The problem about trying to have it both ways is you can’t. Labor can state they oppose the project, but if they’re not going to do anything to stop it why should I vote for them?

Additionally the “we don’t like it, but we’re not going to do much about it either” approach is getting Victorian Labor virtually no publicity, yet we’re only 5 months to an election. If they want a chance at getting back in power they’re going to need publicity, they’re going to need to offer us an alternative vision, and they’re going to have to expose this current governments regime for what it is, one that is: disregarding good planning entirely; virtually ignoring public transport; ignoring advice they comissioned and the advice of bodies they established; and building bloody expensive, unwanted, unnecessary, roads that will actively make this city a worse place to live. However clear that message might be to the sorts of people that read the pages of our lovely hosts blog here, a lot of it is being ignored by the mainstream media. I didn’t see a single comment in the mainstream press that the Coalitions announcement to build the airport rail link doesn’t align with any of their previously released planning documents, nor that of the PTV network development plan. Whenever I’ve seen a story about a PT project the Coalition has announced, I’ve never once seen that even combined, everything the Coaltion has done for PT utterly pales in comparison to the cost of the road.

It is time the Opposition stood up, said they’ll rip up contracts, caught some attention and then ripped into the Coalition at every opportunity they got.

The Maldives previous president signed a contract to build a new airport terminal. In 2012 a new government came to power and scrapped the rip-off contract. The Singapore Court of Appeal has since ruled that the government can expropriate the airport but the private developer must be compensated fairly.

In AUS, as the professor says, “sovereign risk was drawn from Third World countries where governments are liable to nationalise everything at the drop of a hat, and what’s happened in this country is that politicians have misused it to say that you can’t alter either a contract or an aspect of a contract, even if it’s in the public interest to do so.”

We ought to rip up the $18 billion desal plant contract too. The Maldives has shown the way.

I draw a parallel with the GST, both parties liked it but weren’t courageous enough to introduce it until John Howard did it.
Likewise, Labor likes the East West Link project but won’t introduce it if they are in power but the libs have weathered the backlash and Labor will run with it if they win office.
Generally, most parties won’t undo the work of previous governments unless they gain office on a mandate.
Newly elected governments overturning previous government decisions will result in wastage and general instability and lose face with the voters. It does happen though.
Neither party will build a link to the airport. I don’t think Napthine’s recent promise will eventuate. (I’ll believe it when they dig the first sod).

I think most people would beg to differ. $18 billion on the world’s biggest desal plant for our city of 4.3 million is a colossal waste of money and we would be better off cancelling the contract and perhaps having rebates for people to retrofit rainwater tanks for watering gardens and flushing toilets.

WorkChoices was overturned. The FTTP NBN has been overturned. The $511 million airport privatization contract got ripped up when a new government came to power (see my post above). Private companies take Governments here to court all the time, even over plain pack cigarettes but do Governments here have the guts to take a private company to court to cancel a rip-off contract?

Even the CEO of the French company that built the world’s biggest desalination plant in Wonthaggi said he cant understand why it is so big!