The SPEAKER — Order! I have accepted a statement from Minister for Public Transport proposing the following matter of public importance for discussion:

That this house congratulates the coalition government for improving affordability, safety, reliability and punctuality on public transport, and its investment in rail and road infrastructure, and notes Labor’s record of failure during its 11 years in office.

Yes that’s right, the government moved to congratulate itself on transport.

It’s only when you listen to Parliament or read the transcripts that you realise just how polarised the politicians from the two major parties are. Basically no matter who’s in power, it’s:

Opposition: No, it’s all bad! 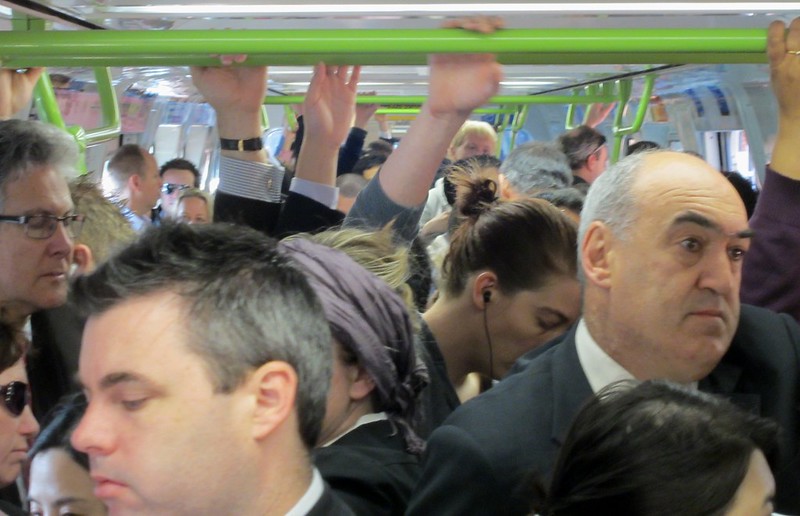 Here are some excerpts from the Minister for Public Transport’s speech, and a look at the figures backing them up:

If one looks at the overall network, then indeed the trend on crowding has been down. Here’s a graph showing AM and PM load breaches. (The surveys are carried out each May and October. These figures are from each October.)

I think there are some problems with the government’s claim:

Firstly, the reduction in load breaches was already underway before the November 2010 election.

Secondly, the fixes aren’t instant. You order some trains, they take a few years to arrive and deploy onto the network, and only then do you see a reduction in crowding. To imply Labor did nothing and that the Coalition fixed it all is just plain false. Both sides can take some credit for buying extra trains.

Thirdly, the network-wide figures hide some of the detail. When you dig down (and by the way the Coalition deserves credit for publishing all the data), you will find that the Dandenong and Werribee lines haven’t fared so well: in fact splitting out their figures shows both bottomed-out in October 2010 under Labor, before rising again under the Coalition:

The Werribee line crowding issues are likely to be resolved by the Regional Rail Link, which will take Geelong trains off that line, allowing more suburban trains to run.

The Dandenong line? Well the growing crowding is why the Dandenong line upgrade project is needed. But how long it is until relief comes is anybody’s guess. It’ll be years away — well after this November’s election, no matter who wins that.

What the community has always asked for — and I know that the Labor government spoke about things that were not negotiable — is more punctual trains, and that is what we have been delivering. Year after year we have been working on getting punctuality up.

I blogged about this a few months ago… again, it’s true that punctuality figures are up.

But just like buying more trains, these things take time to prepare. Most of the punctuality improvement was in early in the government’s term, thanks to a timetable introduced in April 2011, the preparation for which was largely carried-out when Labor was in power (and, it’s been suggested to me, that preparation started even before Metro came on the scene in late-2009).

Plus if you have an operator that regularly skips stops, and puts padding in the timetables, then you can expect punctuality stats to improve.

Here’s another graph, showing how the timetables have been padded recently on the Frankston line. Is it reasonable to add running time if trains are always late? Perhaps, if the delays are due to things like consistently greater passenger numbers, and can’t be resolved. But what if the extra time means trains regularly run early or have to sit idle waiting for the timetable? Not so good. 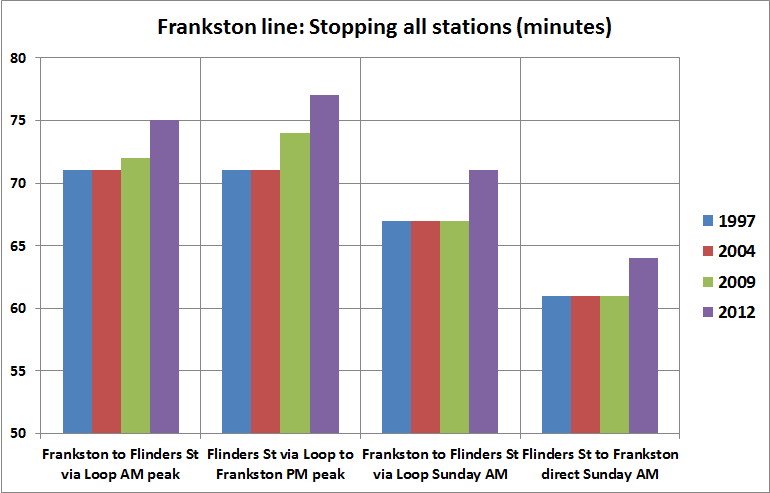 When you look at the customer surveys regarding satisfaction with personal security on Metro services, you see that 50.8 per cent of people said they felt safe in 2009-10 and that today it is 68.5 per cent of people.

He’s got a point here. With deployment of PSOs, I have no problems in believing that many people perceive it to be safer at night than it was before, though those of us who have regularly used trains at night for years might say there’s little real difference. And there is yet to be any clear evidence that it’s resulting in more patronage, as hoped, or that overall crime has reduced.

The award winning regional rail link project is being rolled out by the coalition government and is running ahead of time and within budget. There are 23 additional peak-hour services into the west and north-west and 10 additional peak-hour services into Victoria’s regions.
…
Further improvements will also flow to V/Line as part of the $2 million to $2.5 million Cranbourne-Pakenham rail project — and of course the people of Pakenham get this fantastic new depot the size of AAMI stadium to house and maintain all of the trains. It is a great outcome.

Regional Rail Link was initiated under Labor, and substantially funded under Federal Labor. Would it have happened under the Coalition? Well certainly not if Tony Abbott had been running the country. What about the State Coalition? We’ll never know — until recently apart from $500 million additional funding for RRL, they had not funded any really big public transport initiatives — the Dandenong line package has at last broken the ice.

The community should never trust the Labor Party with these announcements. It cannot be trusted with its alphabetical list of crossings it says are going to be grade separated. If members look at the figures for these particular grade separations, they will see that one works out at over $160 million, but the Labor Party says it is going to do them for $120 million each. This is not buying fruit; these are grade separations projects. They are tendered, they are highly competitive tenders and they do not cost $120 million each

This is something that still puzzles me, because the Middleborough Road grade separation (which included rebuilding Laburnum station) cost under $70 million in 2007.

The Nunawading project in 2010 cost substantially more — $142 million — but was a much bigger, more complex project. Even with the increase in construction costs, it seems silly to claim they all now cost $160 million, no matter how simple or complex.

The full speech and the reactions are worth a read, but I can’t possibly go into every point here.

There’s no doubt the statistics for some of these areas look good, especially if one cherry-picks — notice no mention of cancellations?

But it’s one thing to read out a bunch of numbers in Parliament and conclude everything’s improved out of sight — it’s another to look behind the figures at the real life experiences of passengers on the network.

Crowding and punctuality may have improved on paper on average, but there are still real problems in these areas on some lines, not to mention other issues such as service cancellations, late and infrequent buses, tram crowding and lack of on-road priority, poor connections, lack of real-time information, dirt and graffiti, late starts on Sundays, disruptions due to equipment and other faults… the list goes on.

There is some good news of course. Cancellations due to track buckling and aircon failures have reduced markedly, and some lines now have more frequent, less crowded services.

But to pat yourself on the back (and I’m not even sure what the point was) just seems a little bit out of touch with reality, and with public perception.

6 replies on “Govt congratulates itself on transport. But are the stats really that good?”

A great read today, Daniel. Thanks for presenting the story behind the statistics in a balanced way.
I wonder what will happen with crowding next year when travelling from middle-outer suburbs costs less and (according to the PTUA) the early bird fare stops. But wait a minute, that’s AFTER the election!

I notice no mention of frequency, which has improved somewhat and to my mind is one of the most important areas. Also no comment on trams, or buses. Any idea how the tram accessibility project is progressing?

I totally agree about the economies of scale issue. Anything in life, such as level crossing removal, should cost less to do when done in bulk.

If you had two or more done all at the same time, and all along the same section of railway, you should benefit from the following,

++ One lot of bus replacements, and over the same period of time of just one grade separation job.

++ Dirt you dig out to do one location where you are going down and under, should become land fill for one of the crossings where you go up and over with.

++ Also costs such legal matters, and costly consultants, should be cut to a lower cost too.

++ Then there is the larger bulk purchase of components you need such as signals, sleepers and rail.

Peak Passenger Loads: they do NOT measure stopping trains past Caulfield. These figures are genuinely ridiculous.
One train in the AM peak over the limit on the Frankston line…incredible statistic.

Remember that any counts on days with cancellations or major delays are excluded, because the objective is to measure crowding on days when services are running normally.

What is the point of counting a Frankston train at Richmond, where people change onto a Flinders St train?

Counting is not done for stoppers past Caulfield. This is a fact. If you supply your email address I can show you.