I’ve got a new ceiling fan in the kitchen. The bloke at the lighting shop said that in a kitchen, a metal fan is good because it can be easily cleaned — whereas in a bedroom, quieter wooden fans are more often used.

He also reckoned for the size of the room, the larger 52 inch blades would work well. So here it is in all its glory. 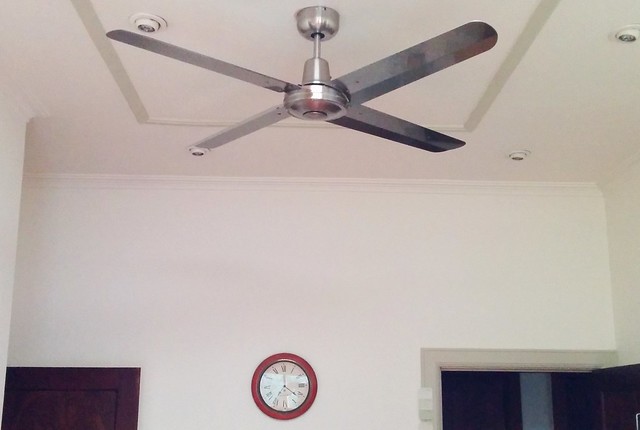 I’m still getting used to it being there up. Sometimes I catch it out of the corner of my eye and think it looks like a gigantic spider up on the ceiling.

At full speed it certainly produces quite a breeze, and helps cool the room down a lot. Wish I’d got it done when I got the livingroom ceiling fan put in, but better late than never.

(I’m hoping the installation cost isn’t too bad… it’s been almost a fortnight since it was installed, but I still haven’t received the bill from the electrician.)

Which brings us to the weather. Here’s the forecast.

I’ve previously graphed how the temperature rises in the house, but that was before I had the good insulation put in the roof (might do an update this week). The insulation means the house doesn’t heat up very quickly… so a single hot day is usually quite manageable.

The run of long days we’re expecting this week (worst since Black Saturday in 2009) will be a challenge though, as the house won’t get a good chance to cool down overnight. Having tried the ceiling fans (now in three rooms) on previous hot days, they do help, as do portable fans.

But no doubt I’ll be pondering my stubborn refusal to get air-conditioning… though there are other less energy-hungry approaches, such as outside blinds over the windows, window treatments, and wall insulation.

11 replies on “Ceiling fan – and the forthcoming heat apocalypse”

I think I’ll come around to your place this week and sleep in your kitchen with the fan on full throttle. Looks like a good investment.

I can’t believe you don’t have air conditioning in a wooden house.
If you’re a “warmist” then you’ll know its only going to get warmer over the next years!

Wow, this website is so much nicer when you use Adblock to block the entire theme.

We put ceiling fans in the bedrooms and no longer use the air conditioning overnight. I wish we had put a couple in the lounge dining area and while I can’t imagine never using the air con, it would be less often. Were the fans in the bedrooms economically wise? Probably not if you already have air conditioning. Environmentally wise? Again probably not if you already have air con. I’m sure the manufacture and installation of them far outweighs leaving the air con on overnight.

To Roger, believe me, the slowest speed is all that we need for sleeping. Maybe if you place is extra hot, medium speed.

How have you been getting on with the downlights so close to the fan? We have a bulb on a batten holder near a fan and we can’t use them at the same time because of all the flickering shadows it causes on the walls. I need to get a pendant light so that the light source is below the level of the fan blades, but I’ve been dilly-dallying.

An evaporative cooler would be good for you. They use little power (just a fan and a water pump) and work fairly well if it’s not too humid. As I write this mine (an Aussie made Convair Coolmaster that I found in the rubbish) is pulling in hot 43 degree air from outside and blowing 25 degree air inside at 76% humidity. A bit humid perhaps but not too hot. On high speed it only uses 200 watts and it is on low speed using even less power now. It is a portable model that I have backed up to a window and I put plastic panels around it so it only draws in dry outside air. I leave the windows in by bedroom and bathroom cracked open to let the air out. Since you have a house you might consider a rooftop ducted model which probably works even better and would cool the entire house.

@Pip, I’m trying to come to terms with the fact that more air-conditioning when my power is from brown coal just makes emissions that little bit worse. Maybe I’ll reward myself with aircon after I’ve got solar panels.

@Philip, one of the down lights is affected by the fan, and does cause some flickering. It’s not too bad if other nearby lights are on.

in my experience, ceiling fans help but only when there’s actually a cool breeze to blow around. we woke up today, the first day of the heatwave, and all the fan does is blow the already hot air around our stifling upstairs kitchen. you can do all the cheap stuff but the only real way to stay comfortable when it’s going to top 43 outside is air con to produce the cold air mother nature isn’t going to until the weekend! I feel bad about the emissions too but we can’t really help Victoria’s reliance on coal power singehandedly

In Melbourne when it’s over 40, if you walk around the house in a damp shirt and use the ceiling fans (or other fans), you will definitely be cooled by the breeze they create. The airflow evaporates the water and that is what causes the cooling. This wouldn’t work in a humid climate, but works perfectly here.

Daniel, looking forward to reading about your solar power experience. I would love to do it myself, especially with a north facing roof in virtual constant sun.
However, the reduction in rebate (by the Labour govt astonishingly) put me off.

Whilst last night was a bit uncomfortable because the temperatures never really dropped, I manage pretty alright in my double-brick ground-floor apartment by simply keeping it shut up tight during the hot days and opening it right up when the cool change comes through. Tonight I think I’ll open it all up at around 10, when by the looks of things the outside temperature will drop below the current indoor temp of 27. 27 is too hot for sleeping, but its fine for sitting around in your shorts. Certainly no need to keep the house 22 all bloody summer.