A few months ago I wrote that allowing a Myki touch-on with a zero balance would bring numerous benefits. 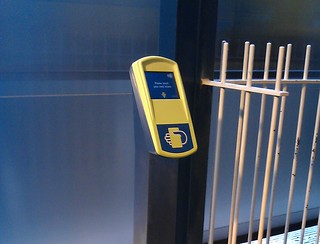 Well in the brand shiny new 2014 PTV Fares And Ticketing Manual appears a small but important change. Unlike the doom and gloom of fare rises, this is a positive.

Yep, you guessed it.

In order to touch on and commence travel, customers travelling in only one or two zones must have on their myki a myki money balance of at least $0.00.

While there is a risk that now more cards will be thrown away after use, this change is a win, for all the reasons I flagged in October:

Hopefully it works as described from today.

From a quick skim, here are some changes I noticed, if you’re really that interested — and I understand if you’re not).

(Some of these changes may have been in last year’s F+TM and I didn’t notice them before — or don’t remember them!)

p32. It says Myki is valid on “V/Line parallel coach services.” which I guess means coaches replacing or augmenting V/Line commuter trains. p55 clarifies that this is only the case if you have an active Myki Pass that covers the whole trip, and that the coach driver will check that.

p42. It still talks about the 2-hour period starting from the next full hour. (The change to exact 2-hours happens in July.)

p43. It specifically says Earlybird ends at 7:15am, not 7:00am. This reflects how the system has actually worked since Myki began; it was so you could still get a free ride even if your train was delayed.

p46. “A myki pass must be activated within 12 months of purchase, or the pass will cease to be able to be activated and will expire.” This explains the expiry date shown on the web site before a Pass is active.

p47. Still the dodgy rounding. “If a myki pass fare is shown as, or is calculated to be, an amount ending in a multiple of one cent, that amount may be rounded up to the next 10 cents at the point of sale.”

p48. Can’t use Myki Money to extend a Myki Pass if travelling on V/Line beyond the Myki area. Hardly surprising.

p52. I thought this was a typo, but it really does appear that outside V/Line peak times, it’s cheaper to make a 3-zone trip than a 2-zone trip (if the trip does not include zone 1). Here’s the full fare table: 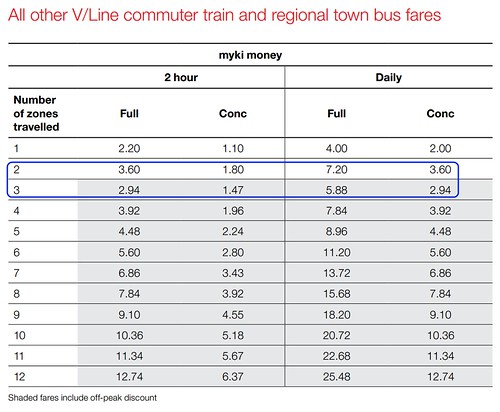 p54. Buses: “a customer must touch off the myki before leaving the bus, but not before the bus leaves the second-last bus stop in that journey” – have they noticed some people touching-off early to avoid paying for going across a zone boundary? The following page notes the same rule for trams.

p127. On the spot Myki refunds for international tourists only… available at the PTV Hub Docklands, and Southern Cross Station. Yes, only two places in the whole state, within 500 metres of one another. Oh well, at least one is near where you get the Skybus to the airport. 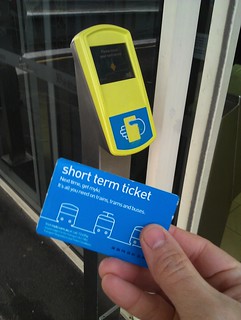 This blog post is mentioned in The Age’s Hecker column this morning.

It’s worth noting that (as heisdeadjim notes in the comments) cards bought at vending machines and booking offices actually have to be topped-up with an initial $1 balance. So effectively your de facto single trip ticket would cost $7 or $4 (concession). Only if bought online can be they obtained with zero balance.

As I noted above, the Hecker column ponders the revenue lost if people started using the zero balance touch-on and throwing a lot cards away. Hopefully it wouldn’t be too much, since a typical Z1 full fare is $3.58, and you’d hope the card itself isn’t costing the government $3.42.

But to an extent the government has brought this problem on themselves by removing the once-planned short term ticket option.

First class upgrade from Southern Cross to Bairnsdale was $8 when I made that trip in August last year.

V/Line first class upgrade has previously been (maybe 12 months or more) $6 for all trips, more recently being split between $4 and $8.

Can I use my MyKi to pay for the First class upgrade?

What about paying for a first class ticket on a V/Line service?

I still must complain about the lack of access onto other V/Line bus routes such as Wonthaggi, and the City-Healeasville-Eildon bus is I believe still not included.

I have a spare card with $0.00 balance. I’ll see if I can touch on with it tomorrow, and presumably do a change of mind :)

The last ten first class upgrade card I bought cost me $35, which was a while ago as less useful as there’s only two services a day I can use it with, after they let everyone sit in first class for free on services to Geelong with a first class carriage, such as the 1816. The morning service from Warrnabool is impossible to get into first class, so the 1839 is often the only choice, so I haven’t bothered.

No, you can’t use MyKi money for a first class upgrade as you need a reservation, too. There are no unreserved first class journeys left.

Confirmed, you can definitely now touch on with a $0.00 balance. I wonder if all the AO’s know (or care).

But supposedly myki charges you the cheapest possible fare for the journey, and since North Geelong is also in Zone 4, myki might decide to charge only $2.94 for the Little River-North Geelong trip. Or, on the other hand, it might not. There’s no way of telling without actually making the journey.

Incidentally, the fact that Lara lies across three zones seems to create all kinds of confusion. A certain off-peak journey on the Geelong line that used to cost me about $5.60 with paper tickets (note I’m a concession card holder) now costs me precisely 89 cents with myki. I wonder if you can work out what is going on here?

“Myki can be used as a defacto single use ticket (for $6 full fare/$3 concession, with no transfers possible except between trains where you don’t have to exit the station).”

Not quite. A minimum $1 myki money top up is still required at the point of sale. A myki can’t be sold with nothing on it.

Also, there’s an opportunity you missed, Daniel. Way back when the myki CVMs were going to sell the short term tickets and then had that option removed, the hopper for the short term myki were physically removed from the internals of the CVMs.

This now means there’s a space inside the CVMs just waiting to be used….. and I reckon it’s be perfect to put in a line of general concession myki and upgrade the software to allow their sale.

This is great news!

Problem: You ride the train from Zone2 to work in the CBD on a rotating shift roster (so monthly tickets are useless to you), and you now pay $12.12 for the privilege of doing so.

Solution: Buy dozens of disposable $6 tickets that give you a single-trip fare from Zone 2 to Zone 1 and throw them out after your trip. If you ride the rail between 4am and 7am, you get free travel, For weekends, just use your permanent ticket and top it up as needed.

Fare evading? No, you already paid your $6 fare when you bought the world’s only non-free rail ticket.

@Aaron, is your odd trip 89 cents before or after the price rise? Is there a Pass also on the card?

The Zone 1+2 fare is $6.06, so you’d be wasting 94 cents every time you did it. Even if you could get the cards free (eg online I think sells them with no topup) you’re only saving 6 cents per time… is it really worth the bother?

(By the way, free Earlybird travel before 7am still requires a ticket.)

This was before the fare increase, but checking the Manual, I think I would be charged the same fare for the journey if I were to carry it out today. And yes, there is a Pass involved.

I’ve found a new (to me) annoyance with negative balances. Say you have $2 left on your card, and take a train. The balance is now below zero. Touch off the train and then attempt to touch on again – you’re not allowed So you’re left with a fare that’s already paid, but that can’t be fully utilised for the rest of the time duration. Quite an inconvenience for those of us who are rushing to catch something and plan to top up the card when there’s more time.