Just a reminder that as noted last week, there are reduced train (and tram) timetables running from this week until Australia Day.

For my fellow Bentleigh people, I’ve marked the weekday cancelled trains for you: 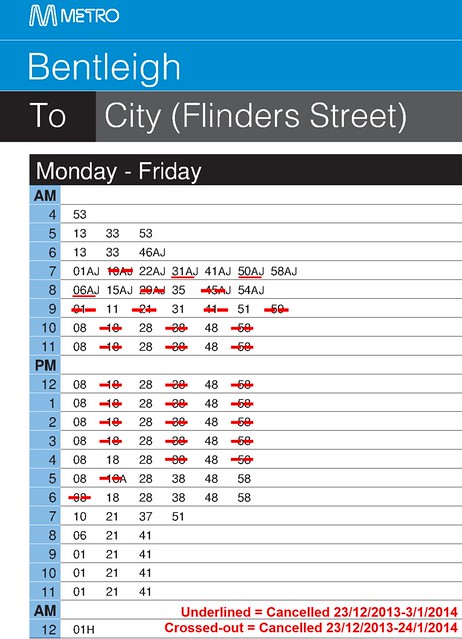 Basically for us on the Frankston line, train frequencies are halved at most times of day on weekdays for the next five weeks. Despite being politically sensitive, the Frankston line is the only one to have cuts in weekday off-peak hours.

Despite the claims, it doesn’t appear to be operationally necessary to do this for works on the Regional Rail Link project.

It actually makes me wonder how much the government is saving through cutting services like this, and how wise it is to have the deepest cuts (bars those lines actually losing trains due to construction works) affect the line that runs through so many marginal seats.

You’ll be wanting to check the timetable before you head down to the station.

And remember when the next election comes around that the government reduced your train service for over a month, causing long waits (and crowding?) while also raising fares.

By the way: it’s easy to print your own personalised stop timetables (at least for the “standard” timetable), courtesy of the PTV (formerly Metlink) web site.

Yes, it is annoying that the cuts were sold as part of an “upgrade”. But your line and my line (Sandy) does not have an upgrade. It’s just saving money over the quieter time.

Cancelling half the trains for a month ? That looks pretty piss-poor to me.

In the old days, people would have blamed the lazy unionists for having too many holidays. These days, more people seem to blame the management.

“Turn up and Not go” timetable has one good point. More train drivers will be able to enjoy Christmas holidays with their families.

Having said that, they need to operate all trains as a double consist (6 car trains) on all trips. V/Line VLocities too!

Not only is the Frankston line the only line getting off-peak cuts without works, it is also the line for lots of beaches and other summer holiday destinations.

@tranzitjim, speak to any of the train drivers, my friend told me that metro has asked drivers to defer their rostered leave over the xmas new year period and take it later on next year. Theyre running less services over the next month but are putting on more drivers over the xmas period. it doesnt make any sense at all

Are they going to halve our fares until we get all our services back :-)?

I thought it was hilarious that a monster flood in London caused cancellations of half the trains, which brought things (proportionally) into alignment with what Metro had done on purpose earlier this week, simply because it decided to reduce services.