Policy directions such as transport provision skewed almost entirely in favour of cars, resulting in a failure to provide most suburbs with fast frequent public transport services.

Decades of building roads at almost any cost, but in many areas a lack of safe convenient walking and cycling routes.

Sixty years of policies which give many Melburnians little choice but to drive their cars.

(RACV was actually railing against efforts by Yarra Council to reduce the number of cars on inner-city roads.) 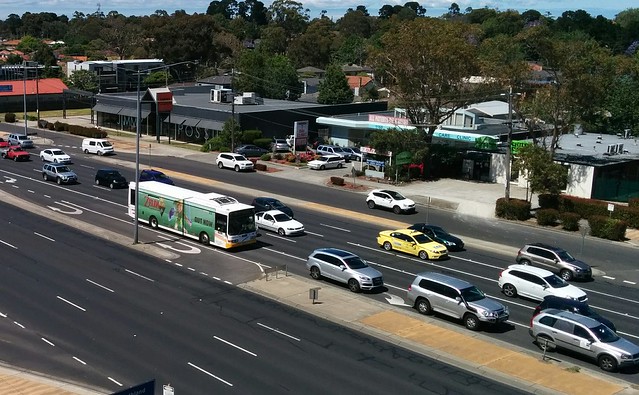 It’s not hard to see the effect of the transport policies of the last half-century. At Southland on the weekend, motorists circled the car park looking for spaces. The alternative – mostly hourly buses – is no alternative whatsoever.

Unfortunately the recently released PlanMelbourne strategy continues the focus on the motor car with important public transport infrastructure such as modern railway signalling systems being scheduled, not in the short or medium term, but the long term. The Napthine Government is prioritising the expensive East-West Link, at the expense of other community infrastructure such as schools, hospitals and public transport.

Victoria has a greater population increase each year than any other state
or territory, driven by having the largest migration intake and Victoria ends up with all the problems associated with this rapid population growth.

Kelvin Thomson MP, Federal Member for Wills, is challenging the assumption underlying the PlanMelbourne strategy that Melbourne’s population must double.
.
Mr Thomson announced the launch of Victoria First, a not-for-profit NGO. It will fight to halt rapid population growth and overdevelopment. Its aim is to safeguard Victoria’s way of life, its backyards, its open spaces, its room to move, room to breathe, room to live.

It always strikes me a bit crazy that to travel into the city on a weekend with my family, that it’s cheaper to drive in and pay for parking than to travel by public transport. I’d like to take the train – the kids love it – but for a family of four it’s more expensive and less convenient. It also strikes me as crazy that tiny children (4 and 5 years old) that cannot use the Myki gates are forced to have tickets and are often nearly get crushed. If the government is not going to make public transport cost effective and convenient, at least someone is ensuring the car infrastructure as good as possible.

I needed to make a 7km trip in outer suburban Melbourne on a Friday night and then return home. I am physically unable to cycle. I could not get public transport as the last bus was 7:30 meaning I would not be able to get home. It is next to impossible to get a taxi for a short trip in this part of Melbourne on a Friday night and even if I could get one it would mean paying a lot more than it would cost to drive. My remaining options were drive, get someone else to drive meaning I would have to leave when they wanted to, or not go.

Maybe Dave should choose not to drive for a year and see the results of such a choice. It is comments like this that make me glad I gave up my RACV membership.

A few years ago I remember the government saying they would build a train station at Southland. It must be open by now. Get the train.

Immigration controls hurt the majority of the world that is far poorer than almost all Australians. Saying that there is no room in Australia because it slightly reduces our lifestyle is nasty and elitist. Population issues have to be dealt with on a global level to be done fairly.

The government has dithered on Southland construction so much that is has not even been put to tender yet.