The whole idea of state-sanctioned racism, treating non-whites as second-class citizens by law, seems ludicrous now, yet it lasted into the 1990s in South Africa.

It was always a ludicrous concept, of course. No wonder The Goodies parodied it as “Apart-Height” in one of their episodes.

As a kid growing up, there had often been news from South Africa, of violence in the townships.

Some of my (white) English relatives actually lived there for a time, and in 1984 my mother visited them. While it appeared my relatives treated people well, my mother came back with amazing photos of Whites Only signs in public places, and stories of the segregation of whites and others, entrenched by an inherently racist rule of law. 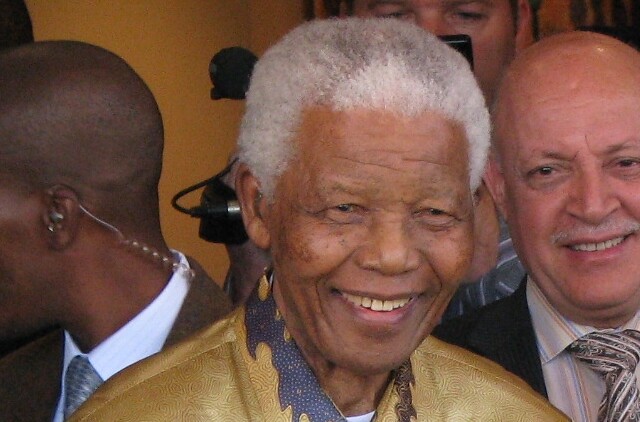 (Pic from: South Africa The Good News, published on Flickr.)

I’ve had to look up the date — 11th February 1990 — but I remember it was a Sunday night in Australia. I was 19, and I stayed up watching television. On-screen for an awfully long time was a shot of a driveway outside the prison where Nelson Mandela was being held. Those present, and the many of us watching on television, were waiting for him to walk out to his freedom.

The ABC was taking a feed from the South African Broadcasting Corporation. When the SABC went to a commercial break, the camera man would take his camera off his shoulder and point it at the ground, or swing it around randomly. The commentators noted that he obviously hadn’t been told his shots were being relayed around the world.

Eventually, Nelson Mandela appeared, in a suit, walking out into the world, to the cheers of onlookers.

Over the years, as South Africa has transformed, I’ve often thought of that night in 1990, and I did so again on Friday when news of Mandela’s death came through. That night was just one remarkable moment in a wholly remarkable life.

And who remembers this song — the iconic Free Nelson Mandela by The Specials?

And this one, not nearly so iconic: Sun City by just about everyone (even Peter Garrett’s in there somewhere)…

No one can deny, Mr Manella as a hero of our age.