Works on the new Elizabeth Street tram platform stops are going full steam ahead. This is significant, because with the rollout of the new E-class trams onto route 96, it’s expected some low-floor trams will be available for the first time on Elizabeth Street, at last providing accessible services from the CBD to the Hospital Precinct. (You’d think this would have been prioritised before, wouldn’t you?) 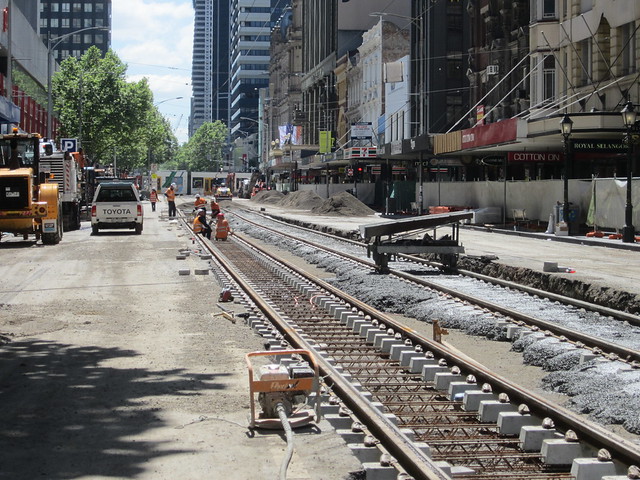 Traders might be complaining about it, but there was no shortage of people around yesterday at lunchtime, and while noise and roadworks may be an inconvenience, it’s not as if the local shops don’t benefit from their location next to one of Melbourne’s busiest tram streets.

As I looked around the western end of the Bourke Street Mall, I noted this car coming along. 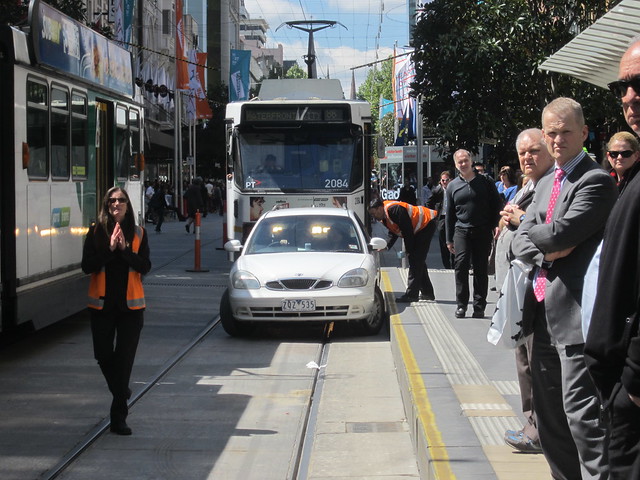 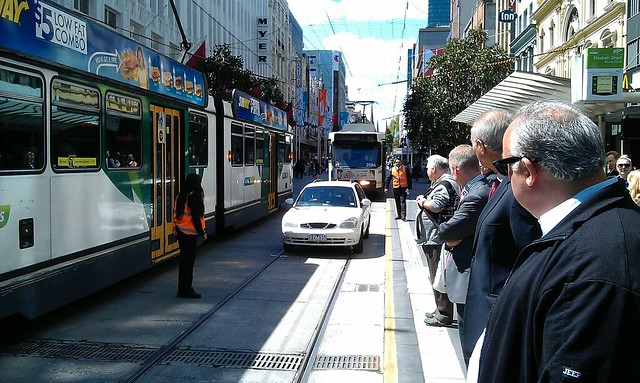 Between two trams, it stopped in the tram stop, unable to go back because of trams behind it, unable to go forward because the road was closed up ahead.

To the amusement of bystanders, it was directed by Yarra Trams staff to do a clumsy three-point turn, nearly colliding with several pedestrians and the tram behind it. 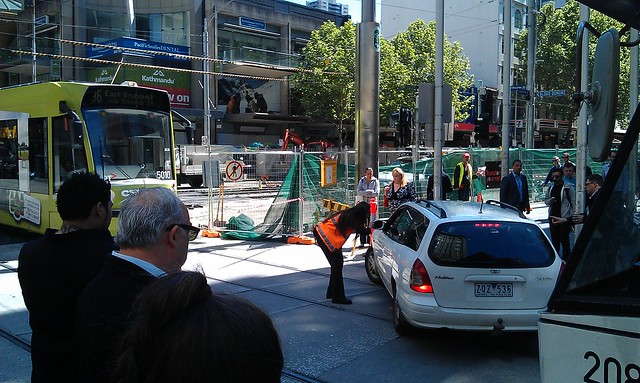 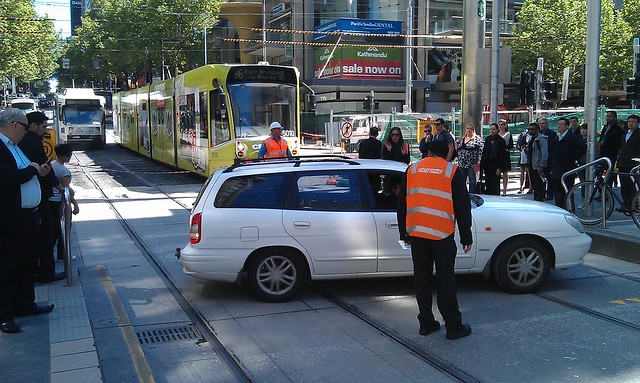 Only a minute or two later, another car came into the tram stop. This one being a four-wheel drive, the staff present decided to let it go ahead over the unmade road surface to escape. 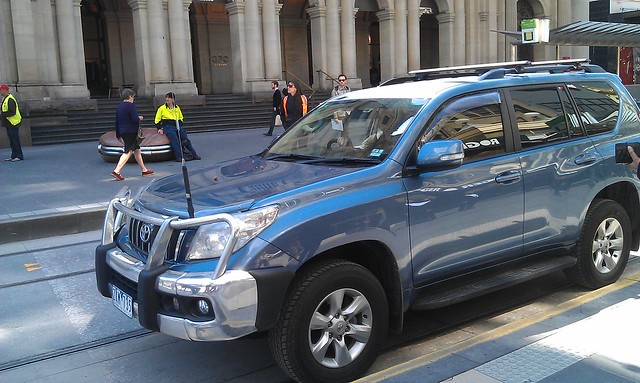 Ignoring the signs. All the many signs.

Where do these clowns come from? There was no evidence they’d been involved in delivering to shops in the Mall.

Some might claim the signage around the place is not sufficient, but you’ll note that these drivers first had to ignore the signs entering Swanston Street (or Bourke Street from Russell Street): 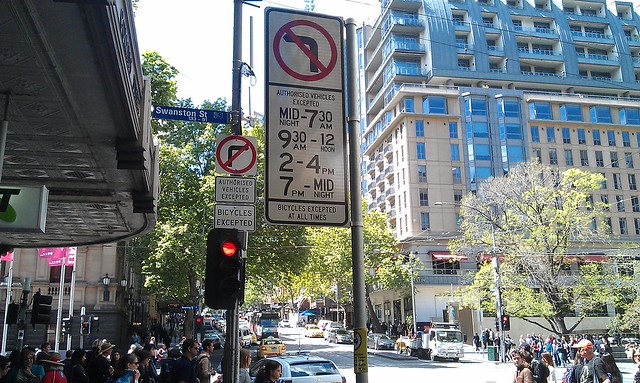 In Swanston Street from the south there are more signs directing you to U-turn before getting to the intersection with Bourke Street: 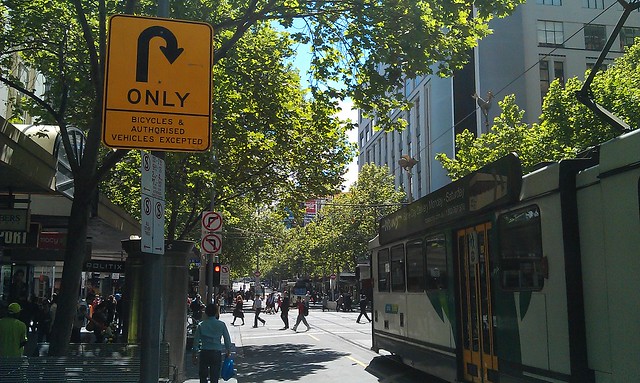 From the north there are signs telling you not to drive through the tram stop: 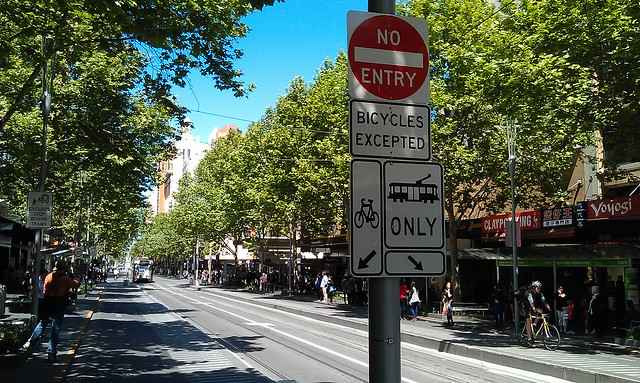 Another set of signs clearly say No Entry into the Mall, except if you’ve got a specific permit: 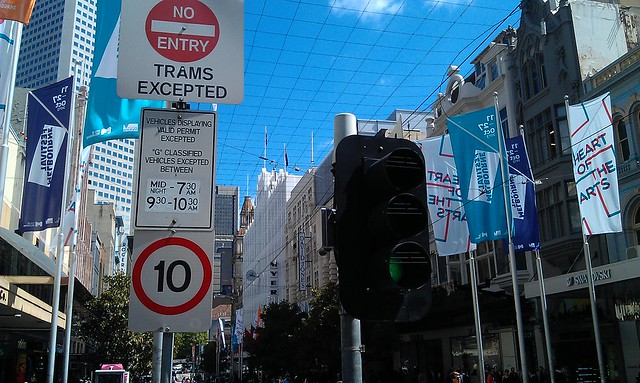 Yet another set of signs add that you shouldn’t drive through the tram stop at the western end.

So it’s not just a case of “I didn’t see the signs”, it’s a case of not seeing (or ignoring) three or four separate sets of signs.

The Central section of Bourke Street has been a pedestrian mall since 1983. For that matter, Swanston Street has been restricted to traffic in daylight hours since 1992. I’d have thought at least drivers from the Melbourne area should have got an inkling of the restrictions in these areas by now.

Oh well, it’s nice to know that occasionally people do get told off for driving where they shouldn’t. This pic from a few months ago: 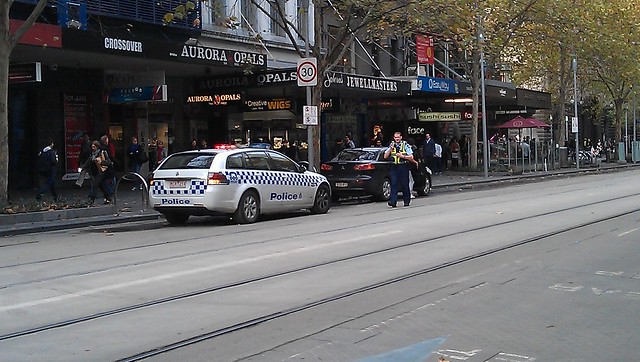 …in fact, Marcus Wong snapped some motorists in the Mall around 4pm yesterday getting a ticking-off from police.

There’s also the fact that the road is obviously made differently. I think they probably need to do cobblestones or make the gutter actually do the u-turn (leaving a gap for cyclists)—like at a driveway. Or perhaps making the road surface a completely different color (although with cars and tracks sometimes authorised to go there, it’ll become much duller before too long).

Car drivers in Australia think they have a right to drive their cars anywhere—it’s no surprise; the government build roads that make them think that, and make the road rules dangerous enough to pedestrians. When it’s not true, they need to do something active and physical to pose a barrier and notice. In any case, there’s a lot of stuff in the city that it’s not completely unreasonable to think something else had their attention.

Yesterday I saw the workers tell a police car to turn around at the same place. It was a divvy van and the road surface was still very rough – the rail was protruding a couple of inches above the road.

[…] Monday afternoon Daniel Bowen also encountered some equally oblivious drivers in the Bourke Street Mall. Has an extra dose of stupid been given to Melbourne’s drivers this […]

There is at least one D2 tram at Brunswick Deport running on the route 19 already, complete with paper destination number pasted to the windscreen.

You expect people to understand those ridiculous signs ?

Why could they not program the D2s with an updated PIDS?

As the D2s where to be allocated to Swanston Trams, of which #19 came under, they where meant to have #19 already in their PIDS.

What a golden opportunity to have island platforms on Elizabeth St. But no…

And that Eastbound Collins St sign has a lot of fine print! Maybe it would be better to says when cars are allowed through rather than when they are not. Or just have electronic signs overhead like Victoria St, Richmond.

Even better, just close off Elizabeth street. I would love that to happen at least to the end between Collins and Flinders.