Anybody who likes to minimise their food miles might like to note this… increasing numbers of Woolworths supermarkets are using bags for fruit and vegetables that are made in the USA. 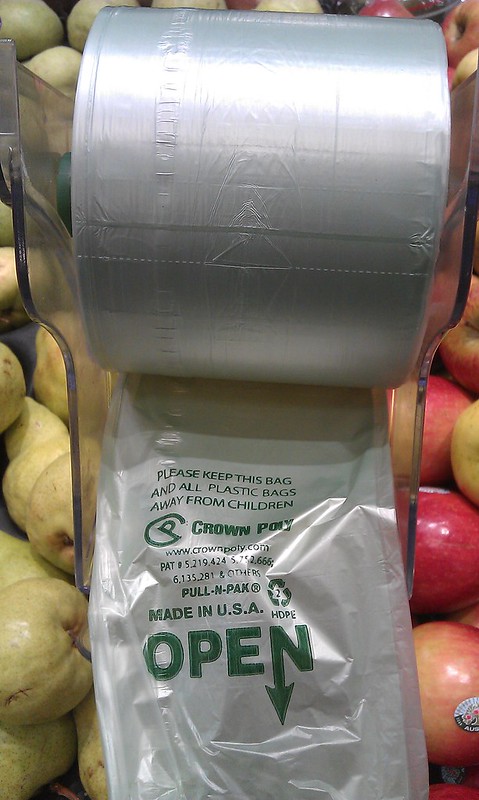 That’s not to say other supermarket bags aren’t also imported from a long way away. As far as I’ve noticed, the Woolworths ones are the only ones that say so.

It’s a similar story when buying cling wrap — almost all brands seem to be made in China nowaways.

The bags shown above aren’t heavy or bulky, of course, but a chain like Woolworths must go through millions of them every year. It all adds up.

Personally, if I’m buying only about three or less of each item, provided they’re not small, I don’t usually bother to put them in a bag at all.

“cling wrap — almost all brands seem to be made in China nowaways”
I made a complaint once to the people who make Glad bags because of their poor quality. The Glad complaints woman agreed and said it was because all Glad’s products are now made in China. Then don’t make them in China!

I also try to avoid the use of these bags. I usually shop at Coles but called-in to a Safeway recently and saw these.

Whilst never really easy to use, I found this type of bag to be particularly prone to entanglement when I tried to open it.

I’m surprised that they are made in the USA and not in China as I would have expected for this sort of product.

I made myself some bags out of netting to reuse. They only weigh 6g to the plastics 3g.

The only items I’ll put into individual bags will be items where you’ll always end up with at least 20 very small items, things like beans, mushrooms, spinach, etc., even then I’ll nearly always use mushroom bags, because they’re recycled paper that can be composted or recycled and even if they do end up in landfill, at least they’ll break down, they’re more GHG intensive, but ultimately its the lesser of two evils. Unfortunately sometimes there are no paper bags so I’ll use plastic.

However, when it comes to plastic bags, I doubt the shipping matters much. The production will play the bigger part in Co2 emissions, and even with the GHG emissions from shipping and production combined, the litter problem is still the big one.

I have a set of ENJO 8 fruit and veg bags (not available all year round I’m afraid) that are a very light white mesh that allows the checkout person to see through but also allows the contents to breathe. Washable too. I have them attached to me regular shopping bags to I can’t forget them.