How often does the Myki reader in the middle at the main entrance to Bentleigh station break down? 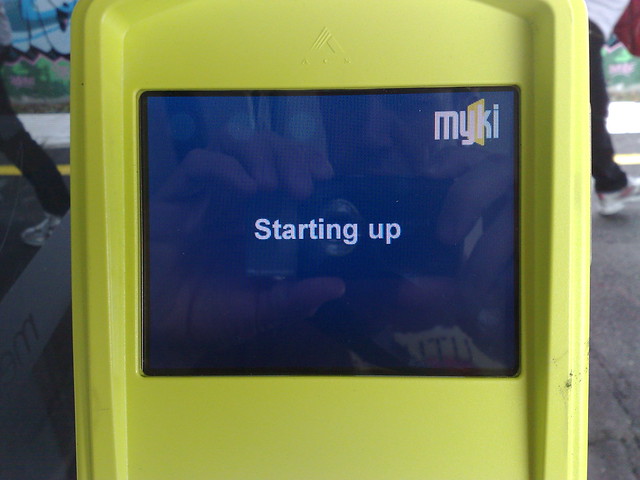 Thanks to my archive of Tweets, the answer is: at least seventeen times since the start of 2010.

Two of three #Myki scanners at Bentleigh stn this morning were inoperable, displaying this: http://www.flickr.com/photos/danielbowen/4544311585/

Hi @mykimate, Bentleigh stn platforms 1/2 middle reader not working AGAIN. (Suspect it's a dud given how often it breaks down.)

Hi @mykimate. Bentleigh station, platform 1+2 entrance, middle reader, not working AGAIN. Why is this one so problematic?

Good morning @mykimate, 2 of the #Myki readers on platform 1/2 at Bentleigh have been out of service since at least yesterday.

Good morning @mykimate, the troublesome reader at Bentleigh station (centre at entrance to platforms 1+2) was "Out of service" again today.

Reported Bentleigh's cursed #Myki reader to a @mykimate at the station. Looks like it's working, but isn't.

Dear @mykimate, this reader at Bentleigh appears on, but doesn't respond http://t.co/ghuADZUuN2

Dear @mykimate, Bentleigh station platforms 1/2 entrance:at least 3 out of 5 #Myki readers not responding, including the one I reported yday

Dear @mykimate, the #Myki reader in the middle of Bentleigh station 1/2 entrance is broken down YET AGAIN.

Hi @mykimate, once again Bentleigh station reader in middle of entrance to platform 1/2 looks alive but not responding. #Myki

I thought there’d be more complaining tweets during 2010, especially as the one in December 2010 (following those in April) makes it clear that particular reader regularly has problems. I wonder if Twitter has lost a few of my tweets.

Of course, I don’t check it every single day of the year. There’s a fair chance it’s been out of action more often.

Early on in the development of Myki, I got the impression that there’d be a degree of automatic detection of out of service devices. Along the lines of: it’s peak hour, there are five readers at this entrance, and the other four have had lots of Myki cards presented, but this one hasn’t — get someone to investigate.

Plus of course, why do they crash in the first place?

What is amazing is that a single reader would be so unreliable. Is it a dud? Who knows.

But along with continuing response time and other issues, it’s symptomatic of a system that, almost four years after its introduction in Melbourne, is still frustratingly inconsistent.

Update July 2014: Marcus Wong has a similar tale of woe from Flagstaff station: How many times can one Myki gate break?

Annoying, but it sounds like you could use another reader nearby to touch on/off. Very rarely has there been an issue with a myki reader being out-of-servcie at my local station (Brighton Beach). And I just used another machine.

I catch trains from bentleigh each day to get to school. Those middle two arent the only ones, it just seems to be on a loop at bentleigh to which ones dont work , and which ones do.

It seems to be the myki top-up machine at my station that’s always stuffing up. There was a good month where the coin slot was out of action every other day. Of course the one day I knew I needed extra money on there and didn’t want to risk taking a bunch of coins* I found the note slot was out of action.

Arh, at least they had the mindset of placing two MyKi readers at each location. Even the little and lonely Tallarook has two, because it has two platforms. Still, if one was broken, at least you have that spare to use.

I have never had a problem. even on 3AW the other day, the shock jock said ‘ MyKi seems to have gone quiet lately’.

Having said that, no machine should fail like that one is.