The other week I experienced a Myki triple-whammy. Three modes, three stuff-ups.

Tram (one with all Metcard equipment removed) – at least one reader that was initially out of service… another was running, but was incredibly slow.

Bus (ditto; no Metcard equipment on-board) – one reader near the back door not working or switched-off (display completely blank). 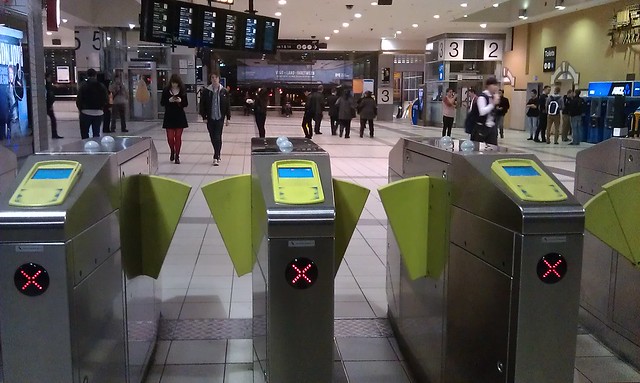 Train – at Flinders Street’s main entrance from Swanston/Flinders Street, no gates at all were allowing entry. They appeared to all have “Validation disabled”. This wasn’t just half, as you might expect if they’d configured different gates for different directions; none were allowing entry. Eventually some Metro staff manually opened one gate and everyone trying to get in was herded through without touching-on. (It was about 8:30pm; not packed, but not quiet either.) Ka-ching – lost revenue.

It’s unclear if this last issue was equipment failure, or staff not able for some reason to correctly configure the gates due to lack of training or other issues.

Myki is not a new system anymore (and nor was it ever a cheap one). It’s been running in Melbourne for more than three years. These kind of basic reliability issues should have been rectified by now. No wonder people are still grumpy about it.

I still regularly crash into the barriers exiting stations, because 75% of the time they open quickly, and the other 25%… they open…. after a while.

Never experienced that on any other system!

I had a similar experience the other week. One morning, three modes, four pieces of broken equipment.

The coin slot on the top up machine at Fairfield Platform 1 was out (grumble grumble, now I’ve got $5.80 for lunch because I had to use my $10 to top up)…

After topping up one of the two myki readers on the same platform was out of action, displaying the normal screen but not responding to anyone’s cards.

After getting off at Flinders Street and onto a tram the first reader I tried to use was out of action, another further back on the tram was functioning*. This reader was displaying the standard not operational message.

A few hours later the bus home also had a non-functional reader, this time it looked like someone had attacked it, the screen cracked and off. Once again, the reader further back was working. I also noticed for the first time that at least some buses do not display any vehicle number inside the vehicle, which meant I couldn’t report the fault to @mykimate; my usual method of reporting faulty myki equipment.

* I noticed that the vast majority of people that found the first reader out of action (at the front most door) didn’t bother trying to find a functional reader, despite the tram not being overly crowded. Bye-bye revenue!

My experience with myki has been on-the-whole very positive. I hate being in the situations you describe, Daniel, as I’m worried an A.O. will nab me for not having touched on somewhere.

Re over zealous AOs…

One advantage of Myki is that your travel history is recorded. This is usually considered a negative (privacy), but it can also be a positive as it provides evidence of your behaviour.

An AO can see the last few trips, so can see that you routinely touch-on. If they are bolshy and you get a notice, you can show from their own records that you have a history of touching-on, particularly if you have a regular travel pattern. It makes it more likely that a magistrate would believe your story that the readers weren’t working.

Andrew
Some comfort, thanks.
I’m one of those people who would just pay the fine, rather than risk a lot worse.

We keep on hearing these statements about unreliability, but what are the actual statistics of failures per thousand transactions? Individual cases yes, but what is the true state of affairs?

“failures per thousand transactions” doesn’t even seem to be a meaningful phrase.

Are you refering to transactions which appear to work, but are defective ?

If the machines is broken, there isn’t a transaction at all.

Like the supermarket does. If there is a special on drinks, ie “2 bottles for $4”, all you have to do is scan your groceries as normal and it automatically calculates that you have purchased 2 bottles and gives you $1 off.

So if I touch-on 5 days in a row, Myki should automatically give me the next 2 days free.

This would reduce the need for people to apply for refunds due to being hospitalised for 6-months (or whatever).