I get The Age delivered on weekends. On Saturdays in particular it’s good to lazily read its numerous sections in the morning.

So I picked it up wanting to know who won the football last night: Richmond or Fremantle? I just want to know if I tipped it right.

Sometimes they have the score on the front page. Not this time. 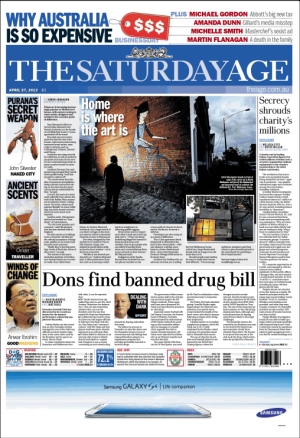 OK, so I flick to the Sports section. Not on the cover of that either. 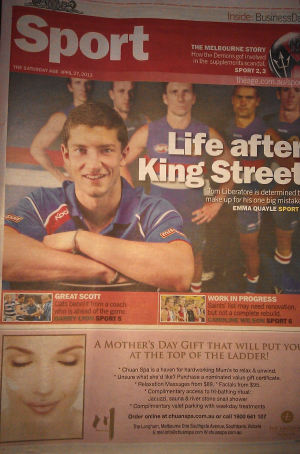 Then I flick through the entire Sports section (not something I do very often, I confess) looking for an answer. It’s not there. Any number of other football-related articles, but not the result of last night’s game.

It seems that while the printed version that landed on my doorstep sometime around 6am doesn’t have it, a later edition (including the Digital Edition) does have it, on page 4. 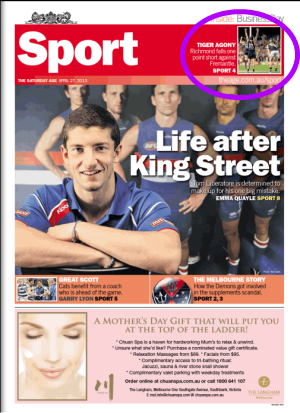 Now, I know the game was in Perth, so would have been a couple of hours behind a Melbourne Friday night game. But it was three-quarter time when I went to bed around 11pm last night, so surely they could have got a result into the paper to be delivered about 7 hours later?

I eventually went back to the Footy Tips web site to find it. I correctly tipped Freo.

And they wonder why the mainstream media is in trouble.

Was it in the Herald Sun delivered to homes?

7 replies on “Last night’s AFL match result – nowhere to be found in The Age paper edition?”

When Margaret Thatcher passed away a few weeks ago, I think it was around 9pm Melbourne time. You would think they would at least have a short mention somewhere in the first few pages?
I couldn’t find any mention in the paper version of The Age the next day, yet it was the front page news in the little paper.
It is almost as if they don’t care about the hard copy edition any more. Once they have laid out the pages, they can’t or won’t revisit it for a breaking story.
If you want the latest news, you get it on the web.
I am afraid, it is another sign of their death spiral. They treat their readers with contempt, and the readers desert them. To cover the falling revenue, they sack more journalists and editors, and have even less capacity to provide what the readers want. And the spiral continues…
Or am I just being hard on them?

It’s another reason I would not bother reading hard copy newspapers any more.

As part of their cost-cutting measures and recent switch to a compact format The Age has pretty much stopped doing edition changes (changing the paper throughout the night to update stories, sports scores, etc) except for Sundays. I’d say that’s why you couldn’t find the footy scores Daniel.

Daniel
our Age, home delivered to Hampton, had the full Freo/Tigers’ story and final result.
My mate who lives in Bentleigh, also complains that their Age doesn’t have the latest footy results.
Sounds like a function of your area’s newsagency delivery schedule. Bad luck!!

I think it’s pretty clear that the hard copy edition is the absolutely least important thing in their collective minds, now and in the near future when it most likely will cease to exist.

Online is far better for updates and links and breaking news. As hubby and I have enjoyed reading it online for free for so many years, we have signed up to pay for the new version.

This has been happening for a number of years. The Age print a “Country Edition” which is then transported to regional areas. As part of this process they pick out certain distribution points on the way to the regional drop off, that they drop this version off at along the way. I was under the impression that the metropolitan drop-offs on the way to the regional areas is varied so that they don’t always get the Country Edition. Obviously the Friday Night footy when interstate (finishing after 11pm) doesn’t make this version.